Accessibility links
After A Slow Start, Melania Trump Hits The Road For 'Be Best' The rollout of the first lady's policy initiative was delayed by her illness and hospitalization in May, but the White House says she'll be making more appearances in the weeks to come.

After A Slow Start, Melania Trump Hits The Road For 'Be Best'

After A Slow Start, Melania Trump Hits The Road For 'Be Best' 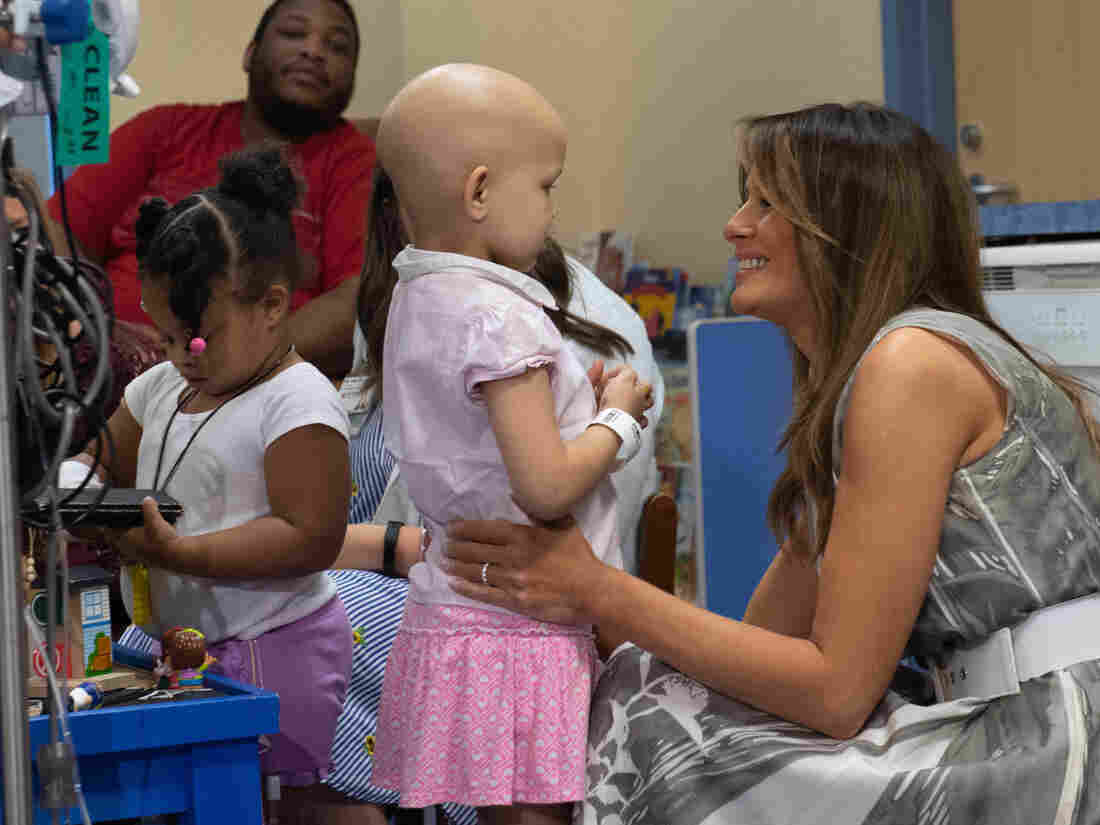 Melania Trump talks with a patient at the Monroe Carell Jr. Children's Hospital in Nashville, Tenn., on Tuesday. The first lady was promoting her Be Best campaign to help children. Saul Loeb/AFP/Getty Images hide caption 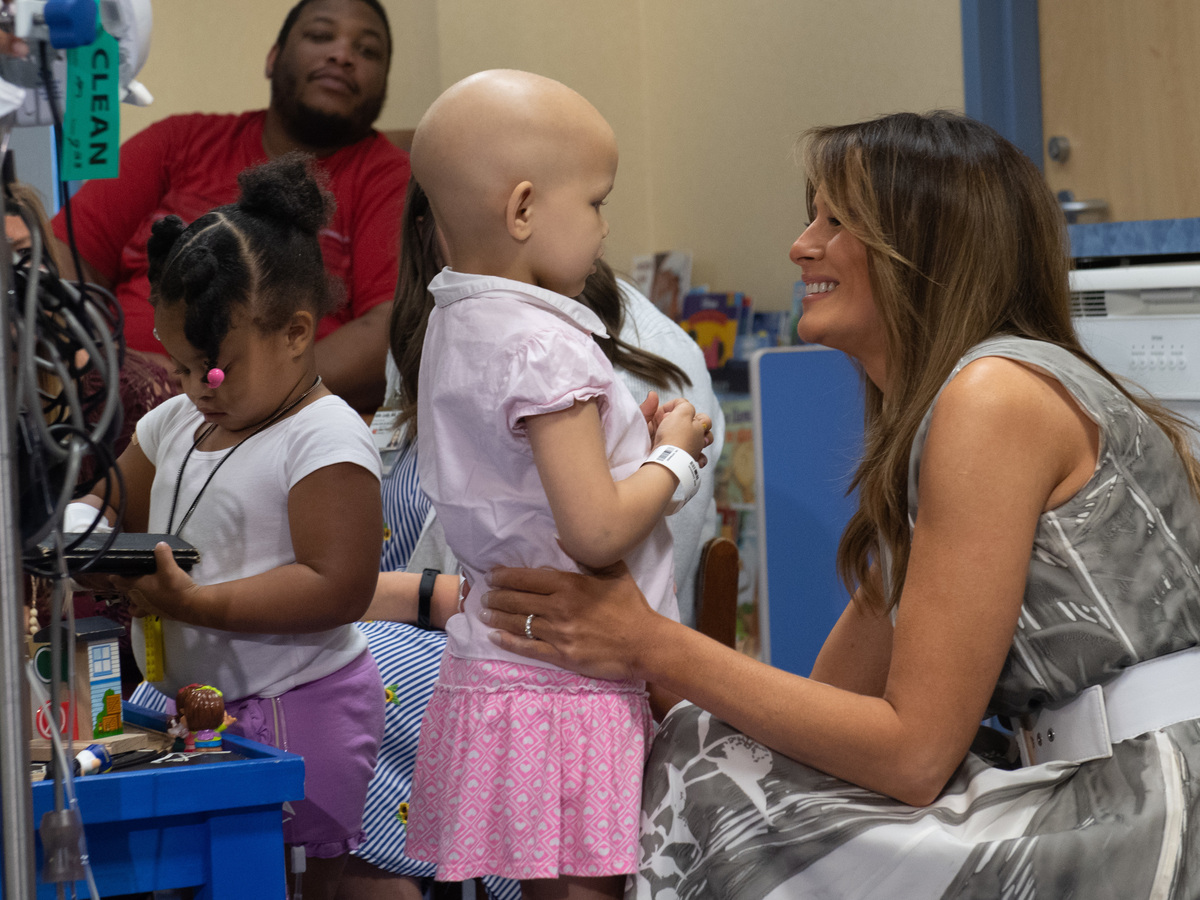 Melania Trump talks with a patient at the Monroe Carell Jr. Children's Hospital in Nashville, Tenn., on Tuesday. The first lady was promoting her Be Best campaign to help children.

Melania Trump's Be Best campaign got off to a slow start when she fell ill just days after launching the initiative focused on the well-being of children. But this week, the first lady returned to promoting "Be Best," with a trip to Nashville to meet families affected by the opioid epidemic.

Her spokeswoman, Stephanie Grisham, said the campaign will pick up in the weeks to come.

"Her health is paramount because she's not going to be able to do any good unless she's completely healthy," Grisham said. "So it definitely slowed things down, but she's perfectly healthy now, so we're back in business."

The first lady has made a couple of appearances related to Be Best in recent weeks, but the Nashville visit was her first U.S. trip for the initiative outside of the Washington, D.C., area, Grisham said.

At Monroe Carell Jr. Children's Hospital at Vanderbilt University, the first lady held what Grisham described as an "emotional meeting" behind closed doors with the family of an 8-day-old baby recovering from neonatal abstinence syndrome.

The syndrome afflicts babies who are exposed in utero to opioids like heroin and prescription painkillers. Newborns with the syndrome experience drug withdrawal and can have difficulty eating or even breathing.

Earlier in the day, Trump participated in a roundtable discussion with medical professionals about addressing the impact of opioid abuse on children, one of the three pillars of the Be Best initiative. Panelists said many pregnant women who are addicted to opioids struggle to get insurance coverage for treatment before and after the birth, and some must travel hours for care.

That's the case for some patients of Dr. Reesha Sanghani, an obstetrician who specializes in treating pregnant women with drug addictions.

"I can tell you that it's very rare that I go through a clinic session without some tears being shed," Sanghani told Trump.

Reporters were ushered out of the room before the first lady spoke, but Grisham said Trump asked questions about how she could best use her role to help mothers. Grisham said Trump said she believes that the more people talk about the issue, the more the "shame and guilt" around neonatal abstinence syndrome will go away.

Trump also met with several pediatric patients being treated for other conditions, and spent time playing with a train set and blowing bubbles with the children and their parents in a hospital playroom. She complimented one little girl on her "beautiful" pink skirt and top, asking, "Is pink your favorite color?"

This Jacket Caused A Racket: What, Exactly, Does Melania Trump Not Care About?

Grisham said that for now, the first lady's goal is to "educate herself" about the issues children face.

In addition to the opioid epidemic and the general social, emotional, and physical well-being of children, Be Best includes a focus on cyberbullying prevention. Grisham said the first lady's office will continue planning events in the coming months related to all three of those issues.

"So whenever we get invited to something that is in line with any of those three pillars, we're going to attend when at all possible," Grisham said.

Trump announced the campaign during a White House Rose Garden ceremony in early May, promising to travel the country promoting the initiative. A week later, she was hospitalized and underwent surgery for what the White House described as a benign kidney condition, and was out of the public eye for weeks.

Since then, she has made two separate trips to immigration facilities to meet with immigration officials and detained children amid the furor over her husband's "zero tolerance" policy for illegal border crossings, which has resulted in the separation of children and parents. She also joined the president on his European trip earlier this month.

Grisham said more events are planned for late August and beyond, with a major announcement in the fall.

"We've got two to six years left to do this," Grisham said, "and so we're taking our time."