Accessibility links
Wildfire Closes Parts Of Yosemite As Firefighters Try To Contain Blaze Park areas that are temporarily closing include Yosemite Valley, where visitors can see rock formations like Half Dome, and Mariposa Grove, an area containing more than 500 mature giant sequoia trees. 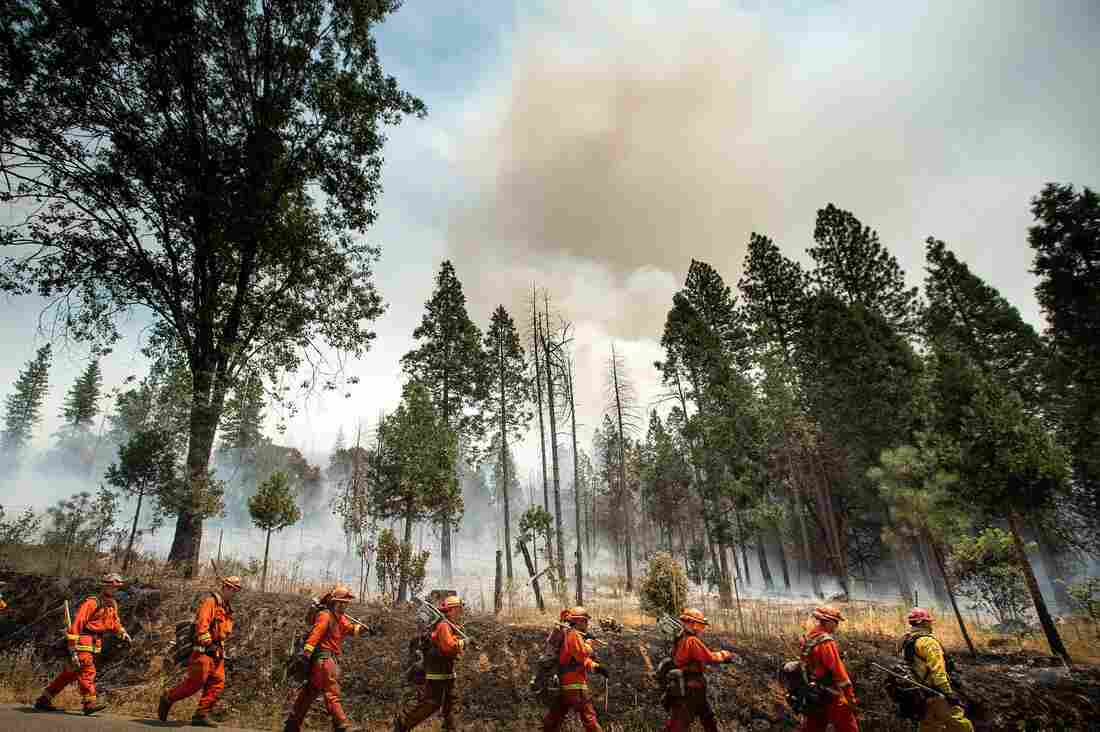 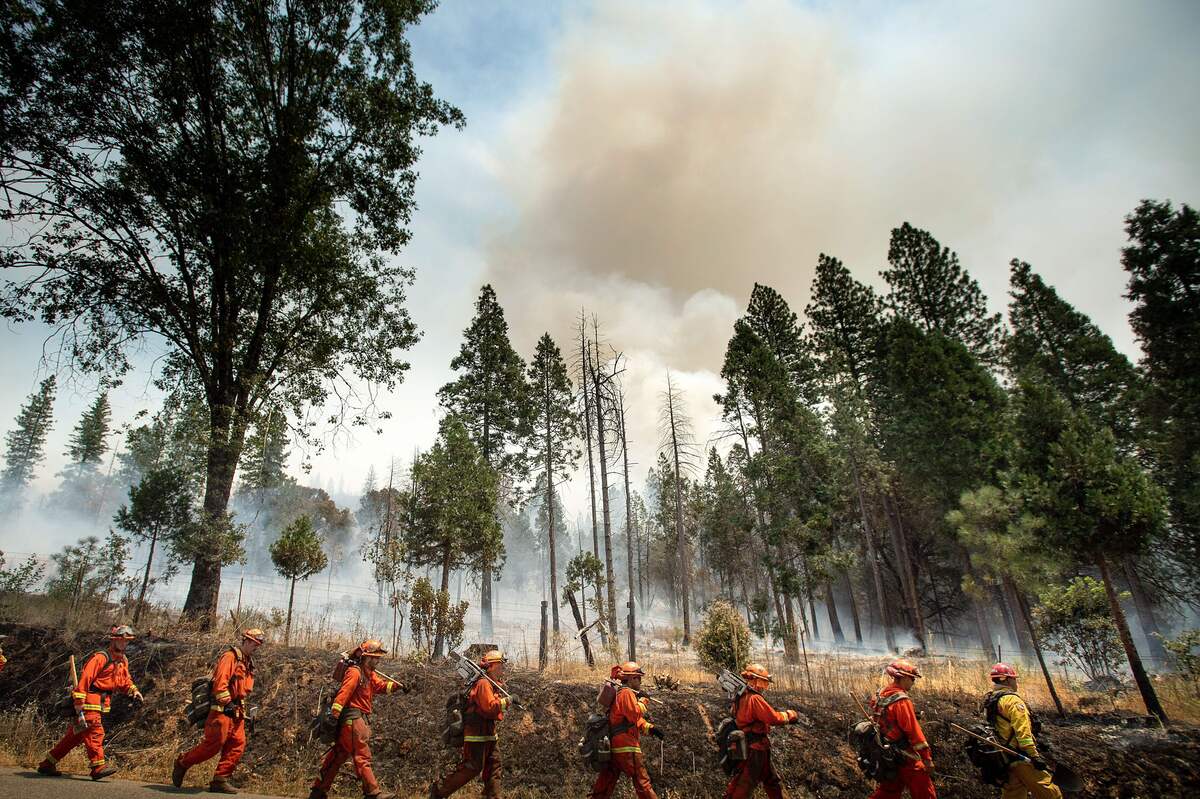 Firefighters battle the Ferguson fire on Sunday in Jerseydale, California.

Yosemite National Park's most popular destination is shuttering as of Wednesday, as a large wildfire continues to sweep through thousands of acres nearby.

The Ferguson Fire, stretching west of the park, has burned more than 38,500 acres and was just 25 percent contained as of Wednesday morning.

Park areas that are closing until at least Sunday include Yosemite Valley, where visitors can see famed rock formations such as El Capitan and Half Dome, and Mariposa Grove, an area containing more than 500 mature giant sequoia trees.

These parts do not appear to be in immediate danger from the fire. As Kerry Klein of Valley Public Radio reports, park spokesman Scott Gediman said the closure was primarily driven by concerns about smoke in the park.

2 Climbers Fall To Their Deaths From El Capitan In Yosemite

"With the high pressure system we just haven't had much wind," Gediman adds, "so you've got that smoke that just sits there."

"Firefighters also need that space to store equipment and conduct preventive operations, including prescribed burns," Klein reports. "This is the first time Yosemite Valley has been closed due to a wildfire since 1990." 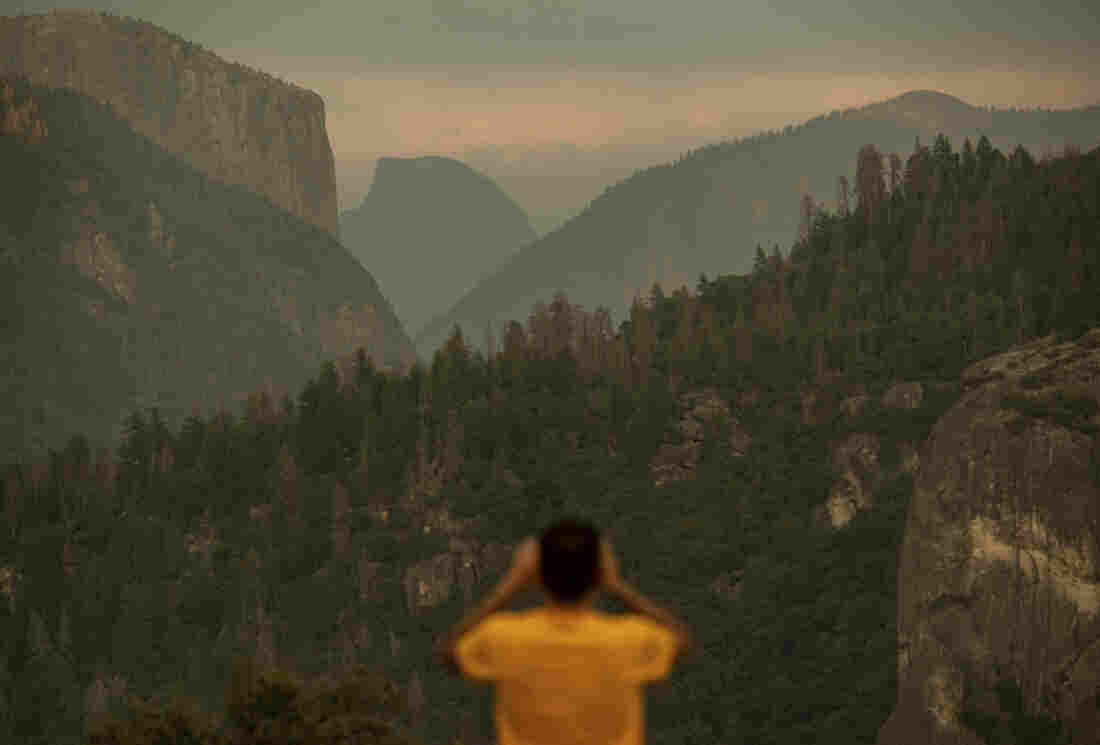 A visitor photographs Half Dome on Tuesday as smoke from the Ferguson Fire is visible in Yosemite National Park, a day before authorities closed parts of it. Noah Berger/AP hide caption 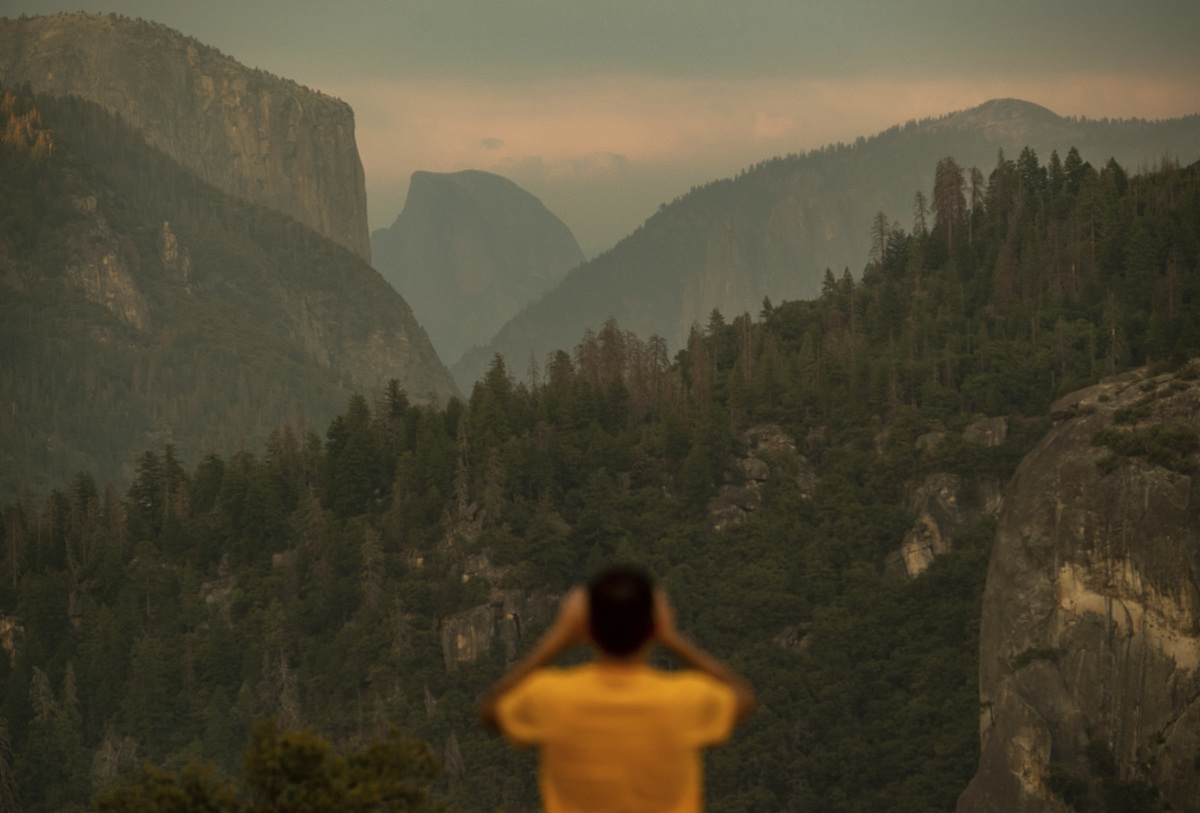 A visitor photographs Half Dome on Tuesday as smoke from the Ferguson Fire is visible in Yosemite National Park, a day before authorities closed parts of it.

The fire has been burning for nearly two weeks in the Sierra National Forest, and has killed one firefighter, who died July 14, when the bulldozer he was operating overturned.

The landscape makes fighting this fire particularly challenging – according to the National Wildfire Coordinating Group, "much of the fire is burning in steep, rugged terrain with little to no access roads."

More than 3,400 personnel are involved in fighting the blaze, NWCG says, in the operation that includes "220 engines, 47 water tenders, 16 helicopters, 88 crews, and 59 dozers."

At this point, no homes or structures have been destroyed by the blaze.

The closure of the park's most famous attractions is obviously disappointing to campgrounds and trailer parks full of visitors, many of which have been ordered to evacuate. They have been advised by the park to "limit activity during periods of poor air quality," and warned that "some facilities and services are closed and diminished."

"People are heartbroken," Rhonda Salisbury, CEO of Visit Yosemite / Madera County, told The Associated Press. "Some want to ride it out for a few days and see if they can get back in the park."

On Tuesday, visitors to Yosemite Valley were warned that air quality would reach "very unhealthy" levels.

California also has a large fire burning in northern Shasta County that has burned 4,500 acres and is 24 percent contained.