Accessibility links
Parker Posey Writes Her Own Myth In 'You're On An Airplane' This "self-mythologizing memoir," which Posey pronounces "me-moir," is written as if it's a monologue to an airplane seatmate, full of collages, cocktail recipes and stories from her life and career. 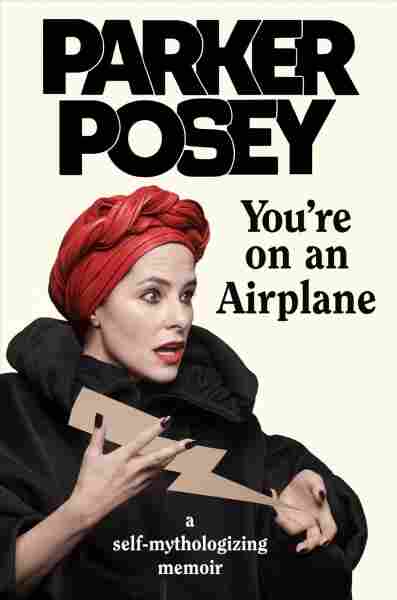 You're on an Airplane

Parker Posey is not the kind of movie star who seems distant and unapproachable. Instead, people shout her most famous lines at her when they pass her on the street. "I've gotten 'Air raid!' for, you know, 25 years," she says, referencing 1993's Dazed and Confused. "And Busy Bee, you know — 'Where's my Busy Bee?' From Best in Show," one of five semi-improvised documentary spoof films she's made with the director Christopher Guest.

Now, the actress once called the "queen of independent film" has a new book out. It's called You're on an Airplane, and the entire narrative is written as though Posey is speaking to someone sitting next to her on a long flight. It's sprinkled with collages, cocktail recipes, and stories from her life — in no particular order. She calls it "a self-mythologizing memoir." Every memoir is self-mythologizing, Posey says, "but, since you read the book, you know that I'm pronouncing it 'me-moir.' It's so dumb," she laughs.

On the meaning of "self-mythologizing."

It was a certain attention that I wanted to give to these stories that kind of repeat themselves in images ... I think actors can kind of tap into this kind of archetypal thing, I think that's what the job is, you know. Just like whether it's a queen or a princess or a fool, or a Medusa, an Iago, the old Greek mythology, the stories ... and we keep, you know, Rubik's Cube-ing them. And there were things in my childhood that I remember that were animated, and for me that were like characters, like the Morton's Salt girl, or the devil on the deviled ham. And growing up as a Catholic, a Southern Catholic, and so there's a relationship to the father, and to God ... This book — and as far as being inventive, you know, I come from a family of characters. I wish you could have met Nonnie and Granny, and of course my own parents, they're entertaining people.

On the first photo her mother took of her — as a baby, wearing false eyelashes

No one took a picture of me in the incubator during the six weeks I was in it — the false eyelashes to me is such a moment. It was just something that was so natural for my family to self-dramatize, to entertain each other, and to expect entertainment from everyone else. It's a Southern thing. Now, underneath all that, of course, is a lot of pain and a lot of drama, because you create that humor out of, I think, a brokenness, or like, "I need to make myself laugh at this."

I think it's callout culture that has upstaged storytelling, auteurs, great artists, and it makes me incredibly sad.

Not so much. I feel very unusual — I never really thought of myself as, you know, a babe. Because I'm more of a funny person, I'm more of a character actor. When the veil was lifted, and I was reminded of all the indignities as a whole, it was heartbreaking to me. And you're just like, "I know some of you guys had good moms, and great relationships with your sisters — why is this still happening?" And then, in the way that the press is dealing with it too and the way actresses are supposed to position themselves as politicians — please don't make me do that! I start to sweat, it's not me, I ramble. I want to be truthful.

Yeah, and then it ends up being, you're just on the spot. And I mean, I think we really like that right now, Ari. I think it's callout culture that has upstaged storytelling, auteurs, great artists, and it makes me incredibly sad, because I think stories and the screen of movies, television, these things that we hold in our hands can make us feel connected, entertain us, and make us nicer, more compassionate, more interested in each other.