Accessibility links
House Conservatives File Impeachment Articles Against Rod Rosenstein Allies of President Trump have targeted the deputy attorney general over what they call foot-dragging by the Justice Department in response to requests for information. 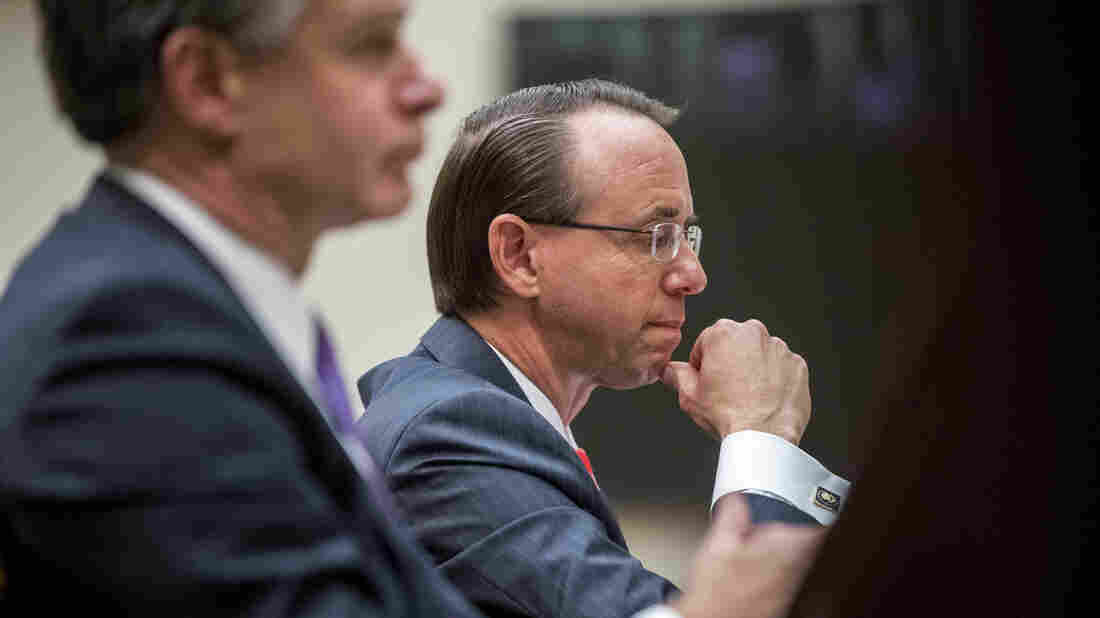 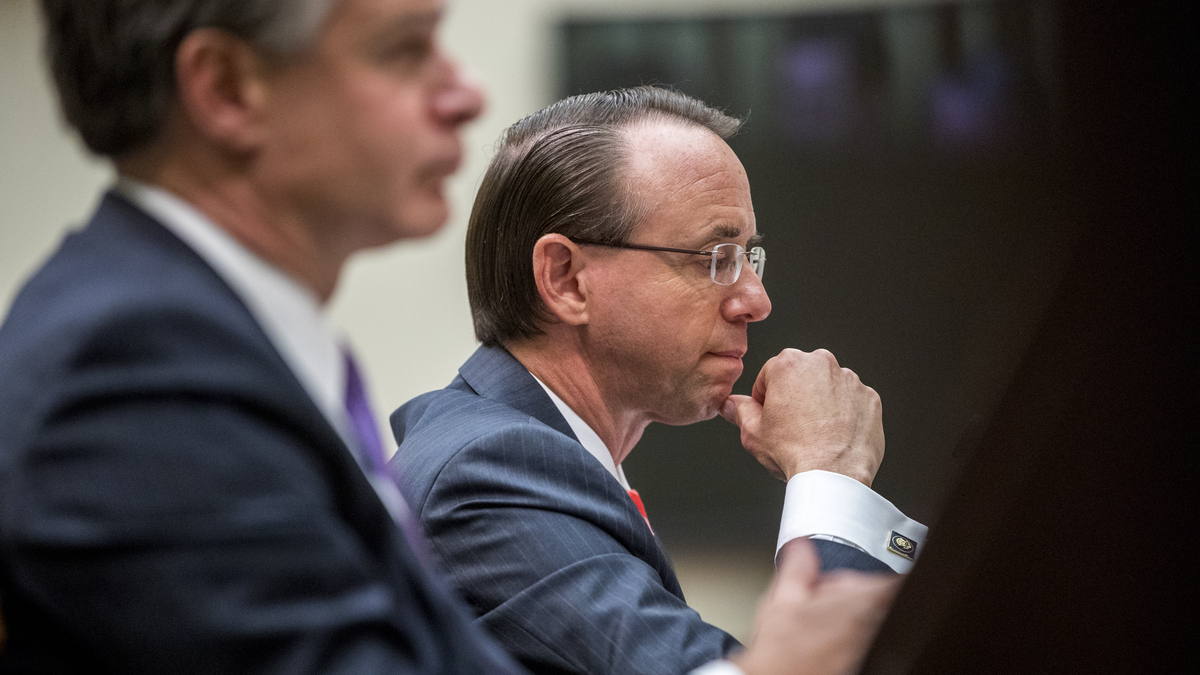 The group of 11 lawmakers, led by Freedom Caucus leaders Rep. Mark Meadows, R-N.C., and Rep. Jim Jordan, R-Ohio, have been threatening to file impeachment articles for months. They say Rosenstein is withholding documents from Congress and has mishandled the 2016 election investigations.

"For nine months we've warned them consequences were coming, and for nine months we've heard the same excuses backed up by the same unacceptable conduct," Meadows said in a statement. "It's time to find a new deputy attorney general who is serious about accountability and transparency."

The House is not expected to vote immediately on the resolution, but a confrontation over Rosenstein could expose serious divisions within the GOP over how to handle ongoing investigations into President Trump. A vote on impeachment would be a public loyalty test for Republicans.

Meadows abandoned immediate plans to pursue an expedited path for impeachment, meaning the measure he introduced Wednesday could languish in committee. It is unclear whether the measure will ever get a vote in the full chamber.

Meadows said Wednesday that he wouldn't rule out refiling the articles of impeachment using a procedural maneuver, known as a privileged motion, that would require the full House to vote within two days.

"We're hopeful we get some documents," Meadows said in an interview on Fox News. "But if not as soon as tomorrow we could do a privileged motion that would require a vote within two days."

Republican leaders in the House, including Speaker Paul Ryan, have been clear that they don't wish to impede the Mueller investigation. Senate Majority Leader Mitch McConnell has all but ruled out any impeachment action for Rosenstein.

So critics including Rep. Adam Schiff of California, the ranking Democrat on the House intelligence committee, have called the impeachment effort a cynical stunt aimed at discrediting U.S. intelligence and law enforcement.

These articles of impeachment against Rod Rosenstein were filed in bad faith and show extraordinary lengths to which House Republicans will go to protect Trump. History will record these Members as willing accomplices in the most serious threat to the rule of law in a generation. https://t.co/nZvyytfgKk

"This resolution to impeach Deputy Attorney General Rosenstein is a direct attack on the Special Counsel's investigation — full stop," the trio wrote. "It is a panicked and dangerous attempt to undermine an ongoing criminal investigation in an effort to protect President Trump as the walls are closing in around him and his associates."

Sen. Dianne Feinstein, D-Calif., the ranking member of the Senate Judiciary Committee, said she sees no grounds on which to impeach Rosenstein.

"This is partisan nonsense," she said. "It's dangerous for the rule of law and it needs to stop."

Trump Wants A Special Prosecutor For Clinton. But They Can Be Political Weapons, Too

Rosenstein has been a target for allies of President Trump since he appointed Justice Department special counsel Robert Mueller to take over the Russia investigation following Trump's firing of then-FBI Director James Comey.

The department's No. 2 leader is responsible for Mueller and his work because Attorney General Jeff Sessions recused himself from any Justice Department investigations into possible Russia ties to the 2016 election. Sessions played an important role in that campaign.

Meadows, Jordan, Florida Republican Rep. Matt Gaetz and others have been turning up the heat on Rosenstein, the Justice Department and the FBI since last autumn.

They're angry that Rosenstein signed an application to continue surveillance on a onetime Trump campaign aide, Carter Page, who the FBI believed was a Russian agent. They're angry that the Justice Department hasn't agreed to appoint a second special counsel to investigate the first, in Mueller.

And Trump's allies are angry because they've been demanding information about the 2016 investigations, including about the use of FBI confidential sources, and they argue that Rosenstein has been stonewalling.

Rosenstein says that's not true. He clashed with House lawmakers in an open hearing last month about the issues. Rosenstein bristled when Jordan, the Ohio Republican, asked him why he was "keeping information from Congress."

Rosenstein told lawmakers in that hearing that the FBI was making "unprecedented disclosures" to Congress, and concerns about the speed of those disclosures were "mistaken."

DOJ and FBI officials have also consistently defended their actions in surveilling Page. House Republicans say Page's rights were violated, but the FBI says it had reason to believe Page was a foreign agent working for Russia.

Most recently, lawmakers have focused on what they call Rosenstein's failure to hand over documents or disclose other information as the main reason he must be removed.

"Enough is enough," Jordan said in a statement on Wednesday. "It's time to hold Mr. Rosenstein accountable for blocking Congress's constitutional oversight role."

The last time the House actually voted to impeach an executive branch official other than a president was 1876.