Accessibility links
No Teen Lifeguard On Duty: Summer Jobs Are No Longer An Attraction More teens have shifted away from typical summer jobs in recent years, opting to spend time with family instead, or take unpaid internships. 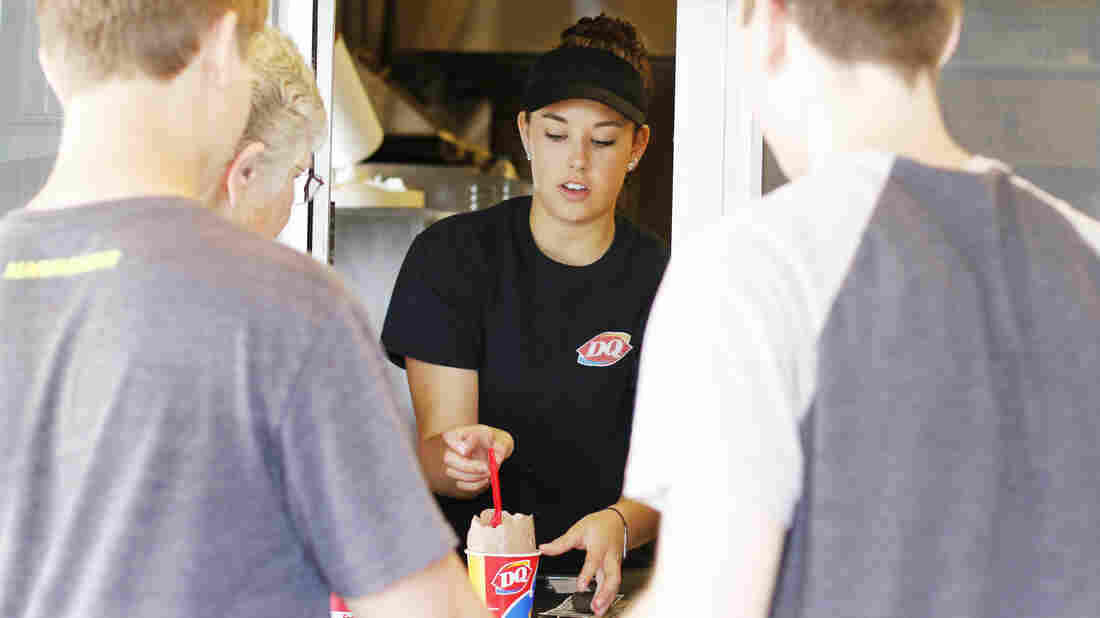 In Maine, a teenager serves ice cream at a Dairy Queen for the summer. But data show teens' participation in the labor force is on the decline, and it has been for decades. Jill Brady/Press Herald via Getty Images hide caption 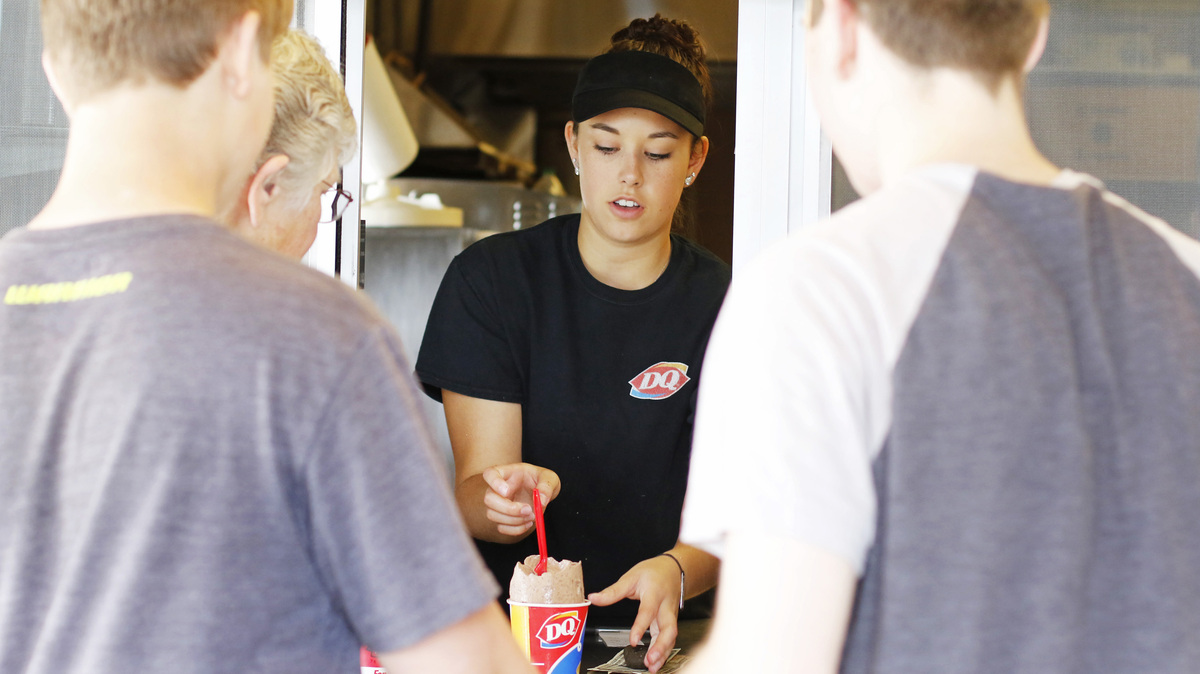 In Maine, a teenager serves ice cream at a Dairy Queen for the summer. But data show teens' participation in the labor force is on the decline, and it has been for decades.

Pedraam Faridjoo of Kensington, Md., is spending his summer volunteering and traveling. Ryan Abshire from Carmel, Ind., is using the time to be with his family. Meme Etheridge of St. Simons Island, Ga., is attending a music camp where she plays percussion.

What do they all have in common? They're teenagers, and they are not working summer jobs.

A summer job, like lifeguarding or scooping ice cream, used to be a rite of passage for teens. Thirty years ago, nearly two-thirds of U.S. teenagers worked summer jobs. Twenty years ago, more than half of them did.

Now, only a third of teens are in summer jobs, according to the U.S. Bureau of Labor Statistics.

Why is this happening? For starters, teens are entering the labor force later. Some employers, like H&M and Zara, won't hire anyone under 18. And many states set the minimum employment age between 16 and 18, said Tom Gimbel, CEO of LaSalle Network, a national staffing and recruiting firm.

"Kids are starting work later," he said. "By that time, they've already gotten jobs — whether it's mowing lawns or internships or babysitting — that don't show up in the data."

Part of the cultural shift goes back to the Great Recession, when so many adults lost jobs and took any work they could find. That left few jobs for teens. In 2009, teen unemployment spiked to a record 27 percent from 16.8 percent when the recession started.

Summer Melt: Why Aren't Students Showing Up For College?

Unemployment among teens has improved and is now back to pre-recession levels. However, the unemployment rate is measured only among people who are actively looking for work. More teens have been falling out of the labor force.

In 2000, the teen labor force participation rate was 52 percent. Today, only 35 percent of teenagers are in the job market.

Guidance counselors in high schools and colleges might say that's a good thing. They are encouraging students to use their summers to prepare for careers.

Geoff Heckman, a counselor at Platte County High School in Missouri, said teenagers can get a jump start on work by taking unpaid internships or on higher education by attending college summer camps. Heckman said counselors begin these conversations with high school juniors every spring.

"We talk to them about how this is a really important time for them, because it is going to set up for them some decisions for their senior year and beyond," he said.

Why Teen Employment Numbers Are Down

One of those teens is Cole Van Bruinisse, a 17-year-old rising senior who spent part of this summer as an unpaid intern at the Centers for Disease Control and Prevention in Atlanta. The experience of an unpaid internship was worth more to him than wages earned from a part-time job, he said.

"I know I want to go into science in the future, specifically genetics," Van Bruinisse said. "I figured it would be really good experience for college, and hopefully it will pay off."

Some teens simply are prioritizing time with family over summer employment, such as Abshire, who's 16 and will graduate from high school in two years.

"I pretty much decided I didn't want a job this summer because I wanted to relive memories with my family ... and enjoy summer time while I still can," he said.

For Many Teens, Summer Jobs May Be Thing Of The Past

"[There are] young college graduates who can't get a job in their field and they're taking what they can get," Morisi said.

The competition for workers is tough, in part due to the skills gap. Forty-six percent of U.S. employers said they are struggling to find job applicants with the skills needed for the job, according to a recent ManpowerGroup survey.

For Faridjoo, not working over the summer is not for lack of trying. The 19-year-old is traveling and volunteering this summer because he couldn't get a job.

"What I've noticed ... is that employers expect us to have a lot of professional experience, but most aren't willing to take a chance on someone who doesn't have much," said Faridjoo, a rising sophomore film major at American University.

Top employers for teens have tended to be in restaurants, retail and office support.

But each of these categories are seeing a decline in teen participation. In fact, teens are now working in almost every kind of job.

Robbie Duseau, 17, wakes up before sunrise to head to his job catching lobsters on the Caroline Rose, a fishing boat in Plymouth, Mass. He works with his dad during the summers and has since he was 13 years old.

"I think that money has a different sense of worth if you're earning it yourself," Duseau said.

For some teens, opportunities for internships and career shadowing aren't as readily available as a typical paid job is.

Kerry Whittle, 17, said most of the teens in her small town of Cranberry Township, Pa., pick up a job wherever they can get one. Whittle works part-time at a pizza shop. When she's not sprinkling pizza toppings, she works as a nanny for a local family.

The Most Surprising Number In Friday's Jobs Report

"I don't need the money per se, but I need the experiences, and I want to get into the working environment to get myself ready for college," she said. "A lot of people my age work ... and it would be a little weird if they didn't."

Jordan Wilson, 19, is from Chesterfield, Va., and has worked all throughout high school and now college to pay for his degree.

"Some of us where I'm from are in positions where in order to pay for college or chip in for college, you have to work over the summer," said Wilson, who works at Wegmans, a regional grocery store chain.

Wilson, who studies international business at Old Dominion University, says he has sometimes had to sacrifice other opportunities, like college preparation or time with friends for the sake of saving up.

"You have to make time where you can," he said. "It's not always easy doing it and you have to cut out the fun stuff sometimes."

In today's economy, there are more jobs than there are applicants, and employers aren't confident that teenagers can fill the gaps. By 2026, the federal government predicts the teen labor participation rate will dip even lower to 31.7 percent, from its 35 percent currently.