Accessibility links
What You Need To Know About The Democratic Socialists Of America The group has watched its membership grow more than sevenfold in three years, and New York congressional candidate Alexandria Ocasio-Cortez has pushed the group even further into the limelight. 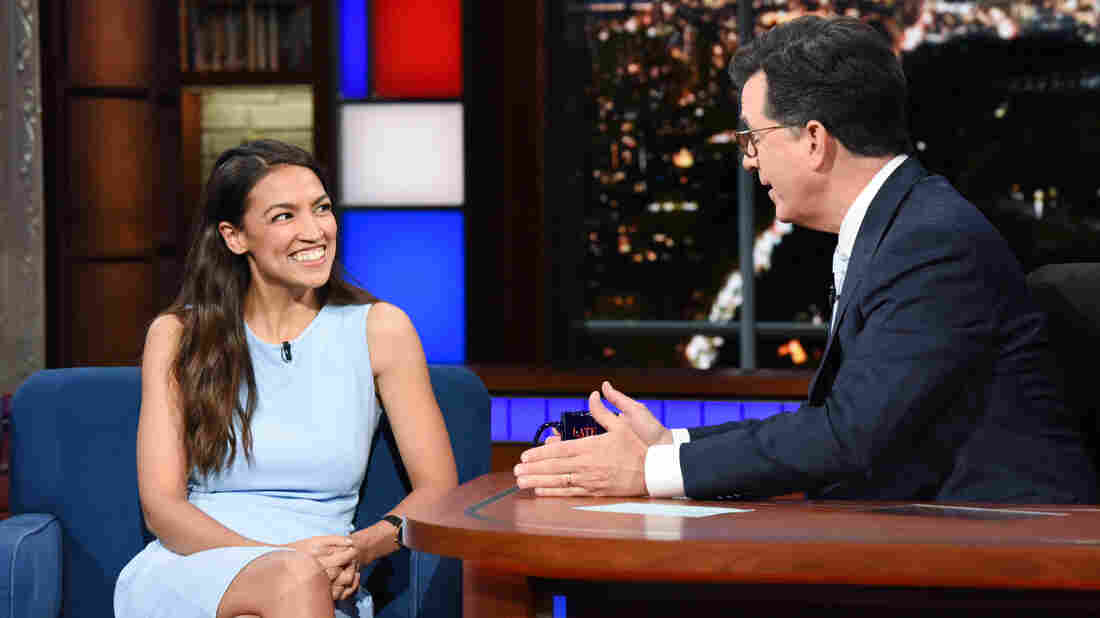 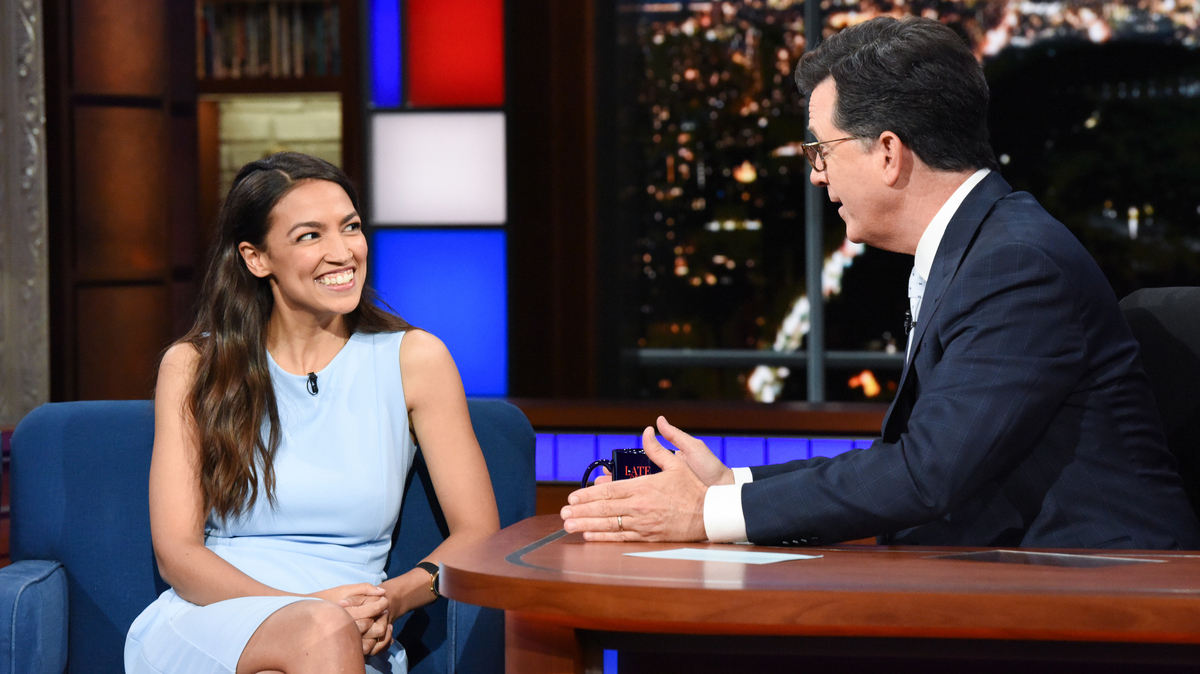 Alexandria Ocasio-Cortez appears on The Late Show with Stephen Colbert in June.

It's a Saturday evening in early July, and the North Central West Virginia chapter of the Democratic Socialists of America is getting together at a brewery outside of Rivesville.

Everyone here has their own stories for how they came to socialism. For chapter co-founder Kelley Rose, a 36-year-old who works for a nonprofit helping young adults stay in school and find jobs, religion played a big part.

"I might be the only one in our little chapter that is a Christian, and it all just fits so perfectly together for me, things that I've always thought anyway along with my values morally and religiously," she said.

"Possibly my mother would want to debate me on this, but if anyone was ever a socialist it was Jesus."

And so, less than a year and a half ago, Rose helped start this chapter of the Democratic Socialists of America, making it a part of the DSA's explosive growth nationwide. Membership has grown sevenfold since 2015, from around 6,000 then to 43,000 as of early July.

But for all of its recent growth, socialism is still an idea with a lot of Cold War-era baggage for a lot of Americans. Still, the group has gained new prominence with New York Democrat — and DSA member — Alexandria Ocasio-Cortez's recent congressional primary win.

Here's how one socialist sums up his beliefs:

"I think we just need to realize that the end goal is, ultimately, like social control of the means of production," said Joe Cernelli, a founding member of that West Virginia DSA chapter. "You know we don't just want to improve capitalism, we will ultimately want to get rid of it."

That's not just his idea; the DSA views capitalism as an oppressive system — "We see it as fundamentally undemocratic," as DSA National Director Maria Svart put it. Here's how she sums up what the group wants:

"When it comes right down to it, we believe people need to be able to live a dignified life. I mean, there are certain things that should not be left up to the market," she said.

Removing some parts of the economy from the forces of the free market, for example. In other words, socialism.

In the DSA's ideal economy, some sectors — like health care and utilities — would be government-controlled. Other businesses would be worker-owned, as Svart explains it.

"Let's say you were negotiating at a bargaining table with workers in a bakery, and the workers said, 'Look, we want more than a quarter of the bread; we want half of the bread, or we want two-thirds of the bread,' " she said. "The socialist would say, 'Actually, we want the bakery. We want to control it all, for all of our benefit.' "

It's easy to focus on the "socialist" part here, but the word "democratic" is also a part of the group's name, and members often stress that part of their ideology. They say putting workers in charge of businesses, for example, necessarily makes those businesses more democratic.

But beyond that, the group advocates for some pretty revolutionary changes to democracy, like abolishing the Senate. The DSA calls it "extremely unrepresentative" for the way it gives both tiny and huge states alike two senators each — the group would like to replace it with a more representative body.

The country — and the attitudes of most American voters — are pretty far from this vision, though, so the DSA is willing to pursue policies that fall short of its ultimate goals. Health care is one example — the group backs "Medicare for All" — where the government provides health insurance, but the private sector supplies the doctors and hospitals. But many DSA members would prefer a system where the government employs the doctors themselves.

The most prominent champion of "Medicare for All" is Vermont Sen. Bernie Sanders. While Sanders considers himself a democratic socialist, he is not a DSA member, and his views don't fully align with the DSA. That's true of members like Cernelli, as well. 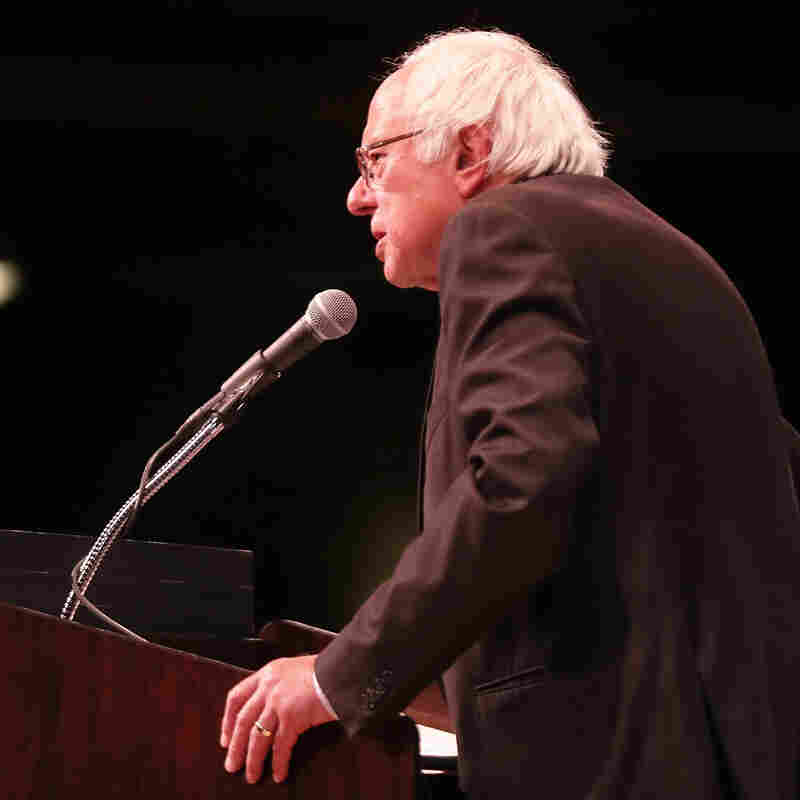 Vermont Sen. Bernie Sanders speaks at a 2016 event in New York City. Sanders describes himself as a socialist, but is not a member of the rapidly growing Democratic Socialists of America. Spencer Platt/Getty Images hide caption 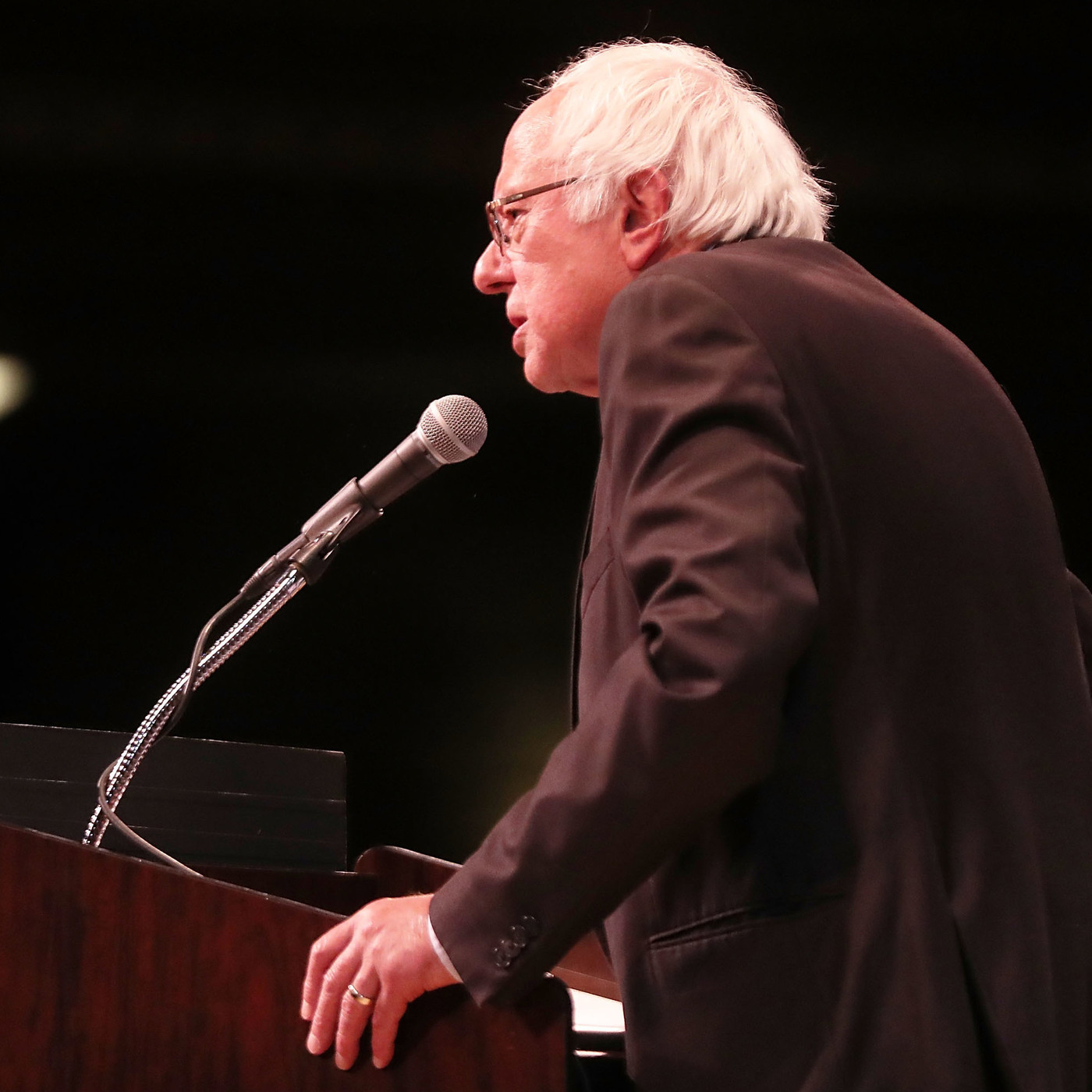 Vermont Sen. Bernie Sanders speaks at a 2016 event in New York City. Sanders describes himself as a socialist, but is not a member of the rapidly growing Democratic Socialists of America.

"I think we could do better than Bernie, but I think it was definitely a good start," he said. "There are some policies that I think he's been a little too soft on, a little too Democrat for me."

And this gets at something important about the DSA: while the DSA has its stated goals, there's no orthodoxy members have to follow.

"I'd say one of its strengths is that it's a big tent — at least on the left," said Maurice Isserman, a professor of history at Hamilton College and a charter member of the DSA. "People come in describing themselves as libertarian socialists or social democrats or anarchists or whatever you know as long as they subscribe to the basic tenets of the organization they can maintain their own political identity within it."

And because the country is so far from the DSA's ultimate vision, the group has a pragmatic streak in how it approaches its radical ideas. For example, in explaining its electoral strategy, the group acknowledges that it's part of a bigger "mobilization to defeat Republican rule at the state and national level," and that "chapters may also choose to support progressive, anti-corporate candidates who do not openly identify themselves as socialists."

And likewise, Svart says, the group sees Sanders as an "ally" while also wanting to go further than he does on many areas.

It can be really hard to nail down what, exactly, the DSA wants, just by talking to members. There are regional chapters nationwide, each with different priorities, and those chapters have members with different socialist ideas.

What policies they support

Beyond that unifying ideology, the group doesn't have a platform that lays out a comprehensive list of positions on a range of topics.

However, the group does have three major current campaigns it has agreed upon: "Medicare for All," strengthening unions, and electing Democratic Socialists.

"Medicare for All": This a term getting thrown around among progressives these days. The basic idea is to take Medicare, which is in part free and in part subsidized for seniors, and give it to everyone else, too.

"We don't want something that's a half measure," Svart explained. "We want to get private industry totally out of the system. We just want to make sure everybody's in. Everybody gets health care."

This isn't an entirely new idea. In fact, Bernie Sanders talked about it a lot in his presidential campaign. And he got attacked for how much it could cost — by one estimate, $32 trillion over 10 years.

Electing more democratic socialist candidates: It has been 20 years since a member of the DSA was in a national seat. Ocasio-Cortez is set to change that, in a congressional race she is heavily favored to win.

She's the most prominent DSA candidate out there, but there's a whole slate of other DSA politicians in smaller races — Julia Salazar, running for a state seat in New York, Sara Innamorato, running for Pennsylvania's House, and Gabriel Acevero, running for Maryland's House of Delegates, to name a few.

Strengthening unions: Svart explained that this involves helping out workers who are organizing or negotiating.

But once again, these are examples of the group's willingness to accept incremental steps on the way to its bigger, much more radical goals.

For example, take the DSA's focus on strengthening unions. The group is helping workers organize now, but it's ultimately in favor of worker-run cooperatives in many industries, as well as putting workers on corporate boards.

How they fit into American politics

Even with only a handful of primary victories for the group's candidates, as well as 45,000 members — a tiny number in the grand scheme of American politics — the group's new visibility is a big deal, Isserman says.

"This is the most important moment in DSA's history," he said.

In addition to skyrocketing growth, the group is benefiting from young American adults growing more open to socialist ideas. One 2016 Harvard poll of 18 to 29 year olds found that 33 percent supported socialism. Capitalism was only slightly more popular with that cohort, drawing 42 percent support.

"Thanks to the economic downturn of 2008, which turned the millennial generation in a significant way to the left, it made them much more open to the idea of socialism," Isserman explained.

On top of that, he added, movements like Black Lives Matter and Occupy Wall Street acquainted young Americans with organizing, making them more open to a group like DSA, with its ambitious agenda. And Bernie Sanders, despite not being a DSA member, claimed the label of "democratic socialist," helping the group gain visibility as well.

While the electoral gains this year won't be all that big, the size of the group's ideological influence remains to be seen.

"There are a couple of issues that I think will be interesting tells as indicators as to what sort of impact they may have," said Mo Elleithee, former communications director for the Democratic National Committee. "The most recent one is eliminating ICE."

Ocasio-Cortez championed the idea of eliminating the U.S. Immigration and Customs Enforcement agency, and some Democratic lawmakers have picked it up. That could be one growing sign of DSA clout.

Then again, though, it could be easy to mistake the group's newfound visibility for political power.

He recognizes that the post-2016 Democratic Party has been moving left, on policies like "Medicare for All" and job guarantees. But Elleithee says that's not evidence that socialists caused the shift among Democrats

"Maybe thats the distinction," he said. "There's a progressive wing of the party that I think is having an impact and is helping to frame the debate."

In other words, it's not that a more popular DSA — or even socialists more broadly — is pulling the party left, it's that leftward-moving Democrats are making the group more popular.

Still, a lot of the group's policies — even if they are gaining more adherents — face an uphill battle. Because of potential cost and also just the radical changes involved, DSA ideas are often criticized as economically and politically unrealistic.

Jonathan Williams understands that. He's a first grade teacher who showed up to the brewery to check out his local DSA chapter for the first time. After seeing Hillary Clinton lose in 2016, he explains, he rethought his more moderate politics.

"That Clintonian view of politics I did find appealing for quite some time," he said. "It took seeing it crushed rather decisively and then all of those gains wiped away in the course of 18 months to realize that maybe that wasn't working. And rather than telling myself that good things are impossible that it's not doing any harm to swing for the fences."

For a voter who thinks the Democratic Party is balking too much, swinging for the fences just seems like the best option.