Accessibility links
Legal Opinions Or Political Commentary? A New Judge Exemplifies The Trump Era Judge James Ho has begun what likely will be decades of service on the federal bench, drawing attention from critics and supporters and encapsulating how much effect Donald Trump is having. 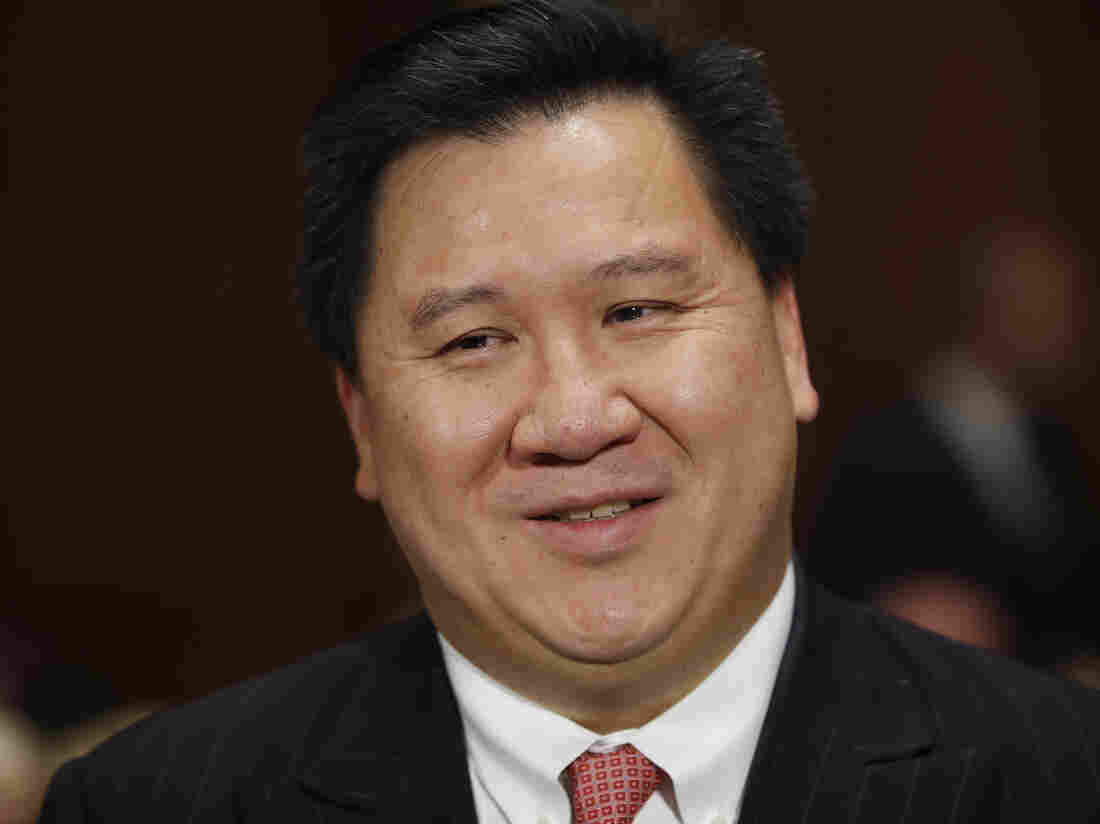 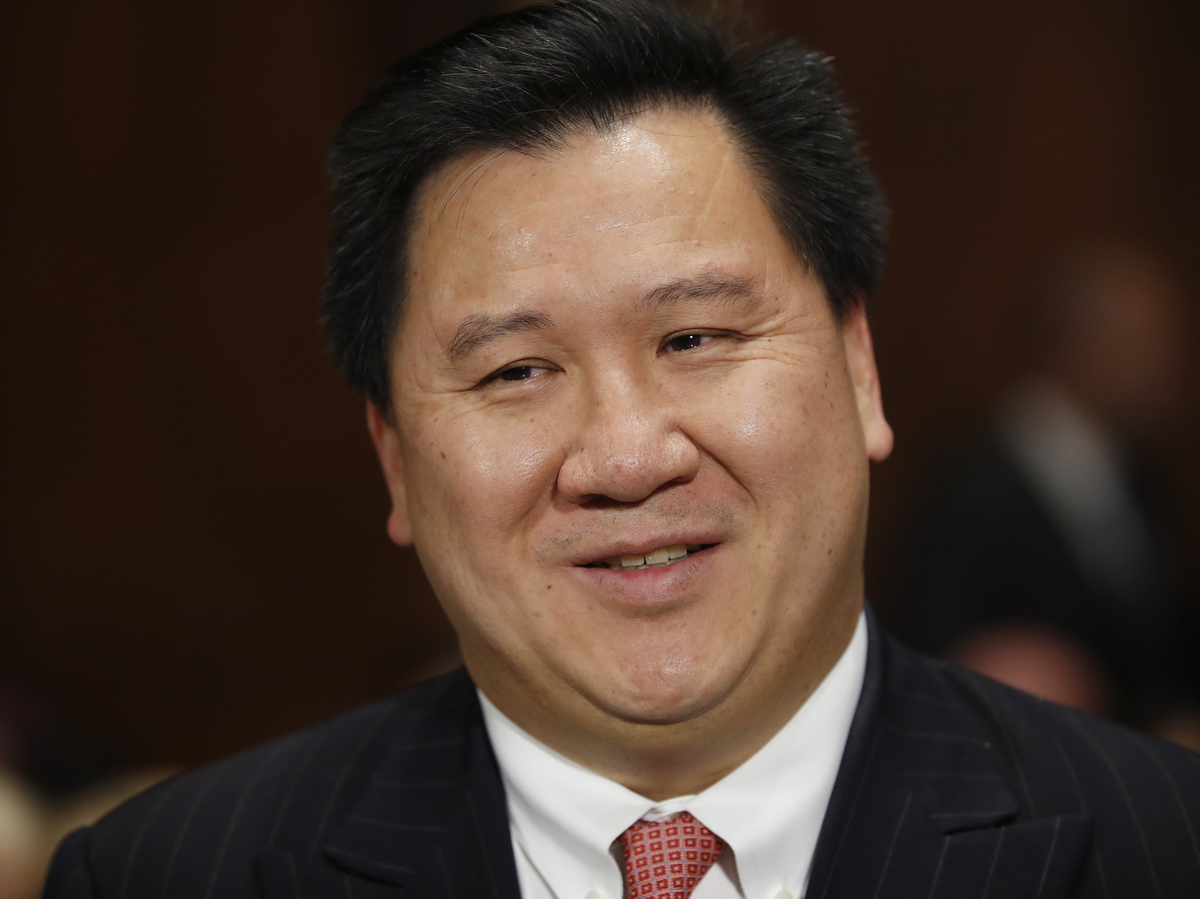 Appellate Judge James Ho, a young conservative newcomer, embodies the changes that President Trump and Senate Republicans are making to the federal judiciary.

Today's government "would be unrecognizable to our Founders," he has written. He condemned what he called "the moral tragedy of abortion." And he's bemoaned that the Second Amendment appears to be considered a "second class right."

What's clear to all is how much the young judge — and many others like him confirmed by the Senate under Trump — is making a mark on the federal judiciary and how much that will continue for decades to come.

Ho said he couldn't comment for this story because he was traveling.

Ho's legal credentials are unmistakable: He attended Stanford and the University of Chicago, served in the civil rights division at the Justice Department early in the Bush administration, and went on to work as chief counsel to Texas Republican Sen. John Cornyn and as clerk for Justice Clarence Thomas on the Supreme Court.

Then, Ho replaced now-Sen. Ted Cruz as Texas solicitor general from 2008 to 2010, leading an aggressive legal attack against the federal government during the administration of President Barack Obama.

In December, the Senate confirmed Ho for a seat on the U.S. Court of Appeals for the 5th Circuit by a vote of 53 to 43. That followed a confirmation hearing in which Don Willett, a colorful Texas Supreme Court justice nicknamed "the Tweeter Laureate of #Texas," drew most of the flak.

But in the months since they took their oaths of office, Ho has been the one attracting national attention. 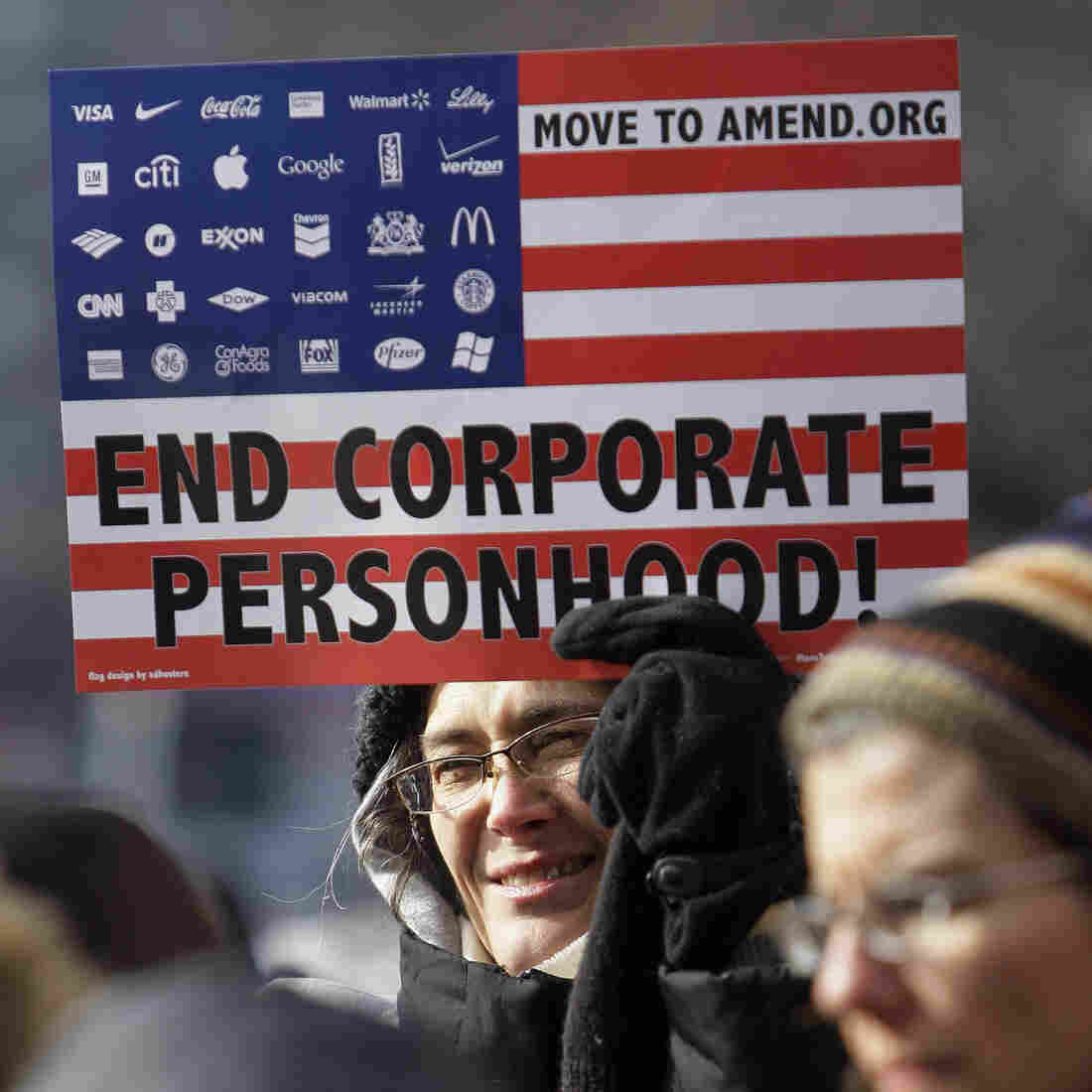 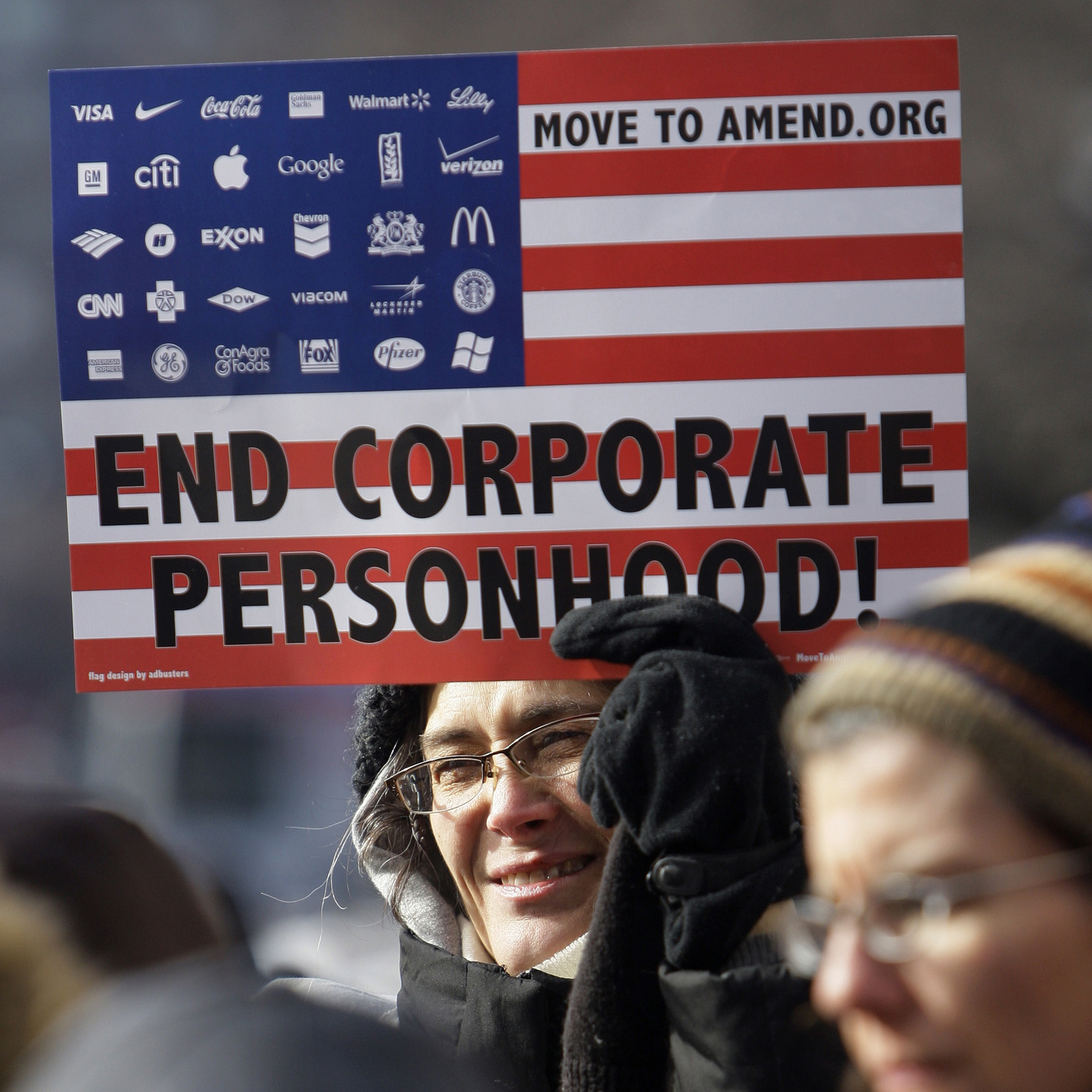 Ho's first opinion, in April, was a dissent in a case involving limits on campaign contributions in Austin, Texas. Candidates for municipal elections — people like mayors and city council representatives who represent fewer than 100,000 people — are barred from accepting donations of more than $350.

A three-judge panel on the appeals court upheld the ordinance, and a majority of the judges on the court voted to keep it that way.

Ho took a different approach, penning a 13-page dissent arguing the full court should hear the dispute. Ho said the contribution limit violated the First Amendment. Then, he went farther, decrying the size of the federal government:

When the government grows larger, when regulators pick more and more economic winners and losers, participation in the political process ceases to be merely a citizen's prerogative — it becomes a human necessity. This is the inevitable result of a government that would be unrecognizable to our Founders.

Then, Ho cited the Supreme Court ruling in NFIB v Sebelius — the case in which a divided court majority upheld the Affordable Care Act, also known as Obamacare.

If we're going to ask taxpayers to devote a substantial portion of their hard-earned income to fund the innumerable activities of federal, state and local government, we should at the very least allow citizens to spend a fraction of that amount to speak out about how the government should spend their money.

Ho's opinion put him closely in tune with the Trump administration, which has made a priority of destroying the "administrative state."

Eugene Volokh, a professor at the UCLA School of Law, said he's been following Ho for years.

"What we're seeing from Judge Ho is a judge who, because he's really interested in law and ideas, wants to write more about the bigger picture," he said. "It's indisputable that he's writing opinions that express particular ideas that some people disagree with, even sharply disagree with."

But Volokh said that Ho is not conservative on all issues — pointing out a scholarly article from 2006 in which Ho supported birthright citizenship, an idea that clashes with some in the Trump White House.

Richard Hasen, a voting rights expert and law professor at the University of California, Irvine, is also among those taking note of Ho, in part because of his unusually aggressive approach for someone new to the bench.

"Rather than doing what lower federal courts are supposed to do — apply binding Supreme Court precedent — Judge Ho went out of his way to express his agreement with Supreme Court Justice Clarence Thomas's views of how campaign finance cases should be resolved," Hasen said.

Ho also is setting himself apart from a more conventional appellate judge in the way he directs his attention toward big, strategic criticism about the size of government, as opposed to one focused more on the laws at issue in the case, Hasen said.

"Judge Ho moved fully from a legal role to a policy one when he told readers of his opinion that if they did not like big money in politics, the solution was not campaign finance reform but shrinking the size of government," he said.

"This struck me as wholly apart from his judicial role, and while I believe it would be perfectly fine for Judge Ho to give a speech or write an article on such a question, the view should not have been included in a formal legal opinion."

Orin Kerr, a law professor at the University of Southern California, seemed to agree. Kerr tweeted that Ho's law clerks "should have urged" he remove a passage "that reads like a politician's op-ed."

Jim Ho's law clerks should have urged that he take this passage out. It reads like a politician's op-ed, not a legal opinion; judges should stick to law. https://t.co/HiAmm0AsZH pic.twitter.com/ISKdJlKDVS

Ho's old friend, Texas Sen. Ted Cruz, has been impressed enough to suggest Ho would be a good fit for the Supreme Court, noting the high court has never had an Asian-American justice.

Ho arrived in the U.S. as an immigrant from Taiwan when he was a child and describes himself in a biographical listing as "Taiwanese by birth and Texan by marriage."

Ho's wife, Allyson, clerked for Supreme Court Justice Sandra Day O'Connor, and went on to argue four cases before the high court as an advocate. She's currently a partner at the law firm Gibson Dunn & Crutcher, where Jim Ho worked before becoming a federal judge.

A law firm spokeswoman said the transition was so easy that Allyson Ho took over her husband's old parking spot at the firm.

But critics say Ho adopts a harsher tone in his day job as a federal appeals court judge.

Earlier this month, Ho weighed in on a case that challenged a Texas law that requires cremation or burial of "fetal remains." Texas maintained there was no real cost to patients or clinics because the state's Conference of Catholic Bishops said it would do the burials for free or for a modest fee.

The dispute made its way back to court, where a district judge sided with the plaintiffs and against the Conference of Catholic Bishops. Ho voted, successfully, to block the lower court's order.

"It's hard to imagine a better example of how far we have strayed from the text and original understanding of the Constitution than this case," Ho wrote in a concurring opinion." The First Amendment expressly guarantees the free exercise of religion — including the right of the bishops to express their profound objection to the moral tragedy of abortion."

More recently, in a case involving the ban on interstate handgun sales, Ho complained, "the Second Amendment continues to be rated as a 'second class' right," borrowing language from his mentor, Clarence Thomas, and new Supreme Court Justice Neil Gorsuch.

"Law-abiding Americans should not be conflated with dangerous criminals," Ho added. "Constitutional rights must not give way to hoplophobia."

The Urban Dictionary defines that term as an "irrational, morbid fear of guns."