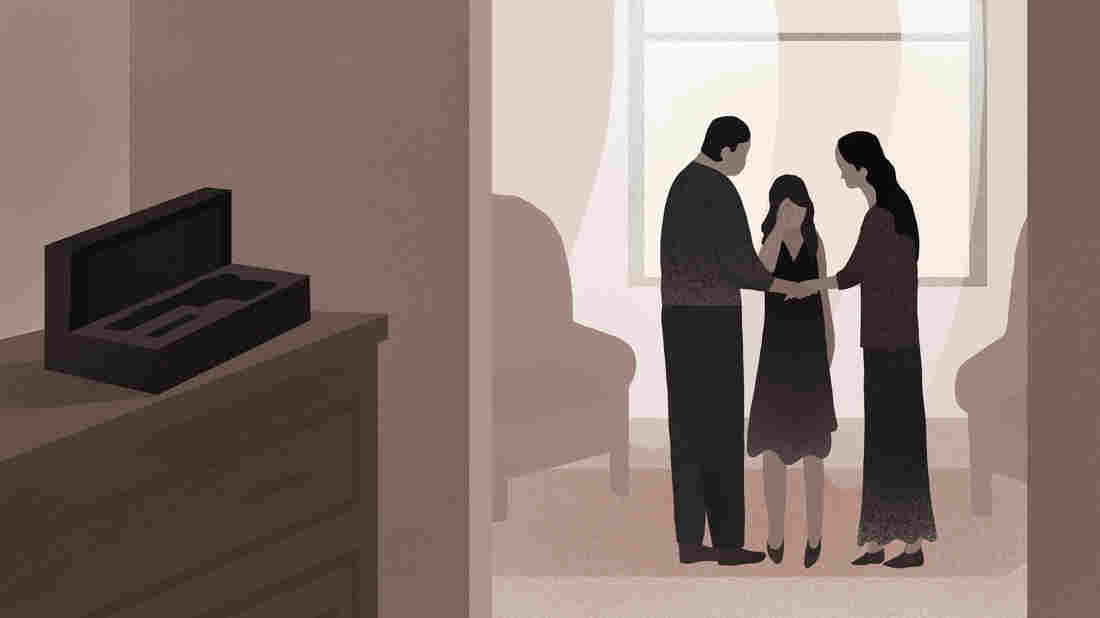 The conversation around gun violence in the U.S. usually focuses on homicides, urban crime and mass shootings. But the overwhelming majority of gun deaths are suicides. Nicole Xu for NPR hide caption 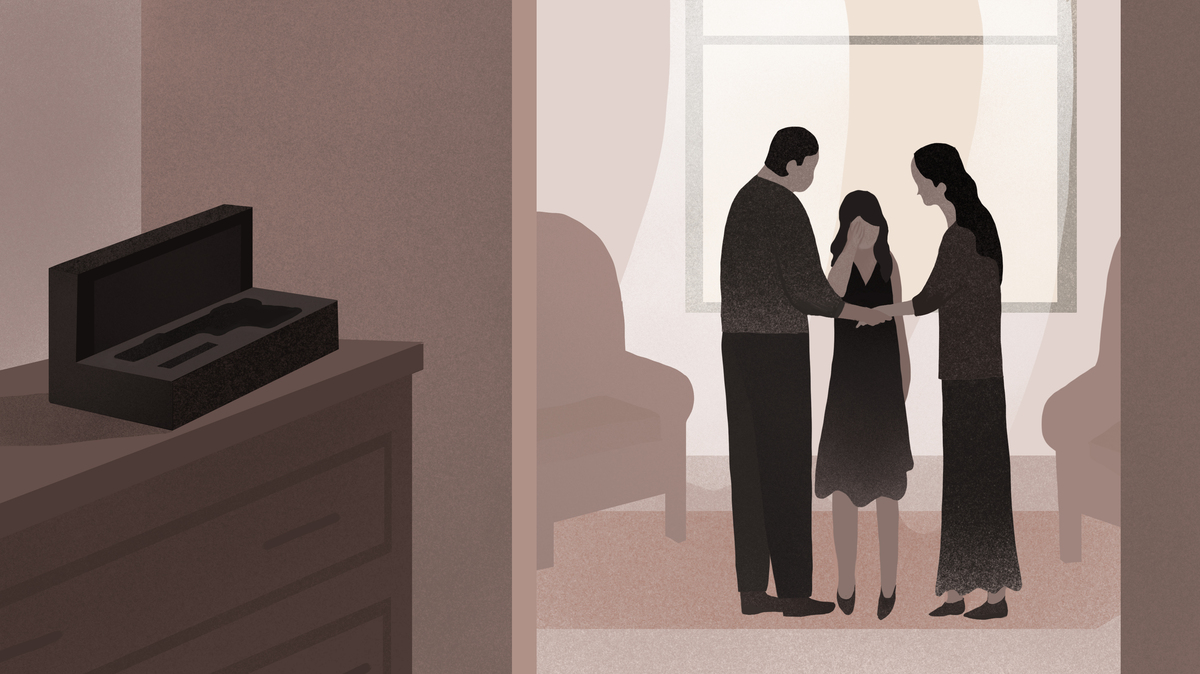 The conversation around gun violence in the U.S. usually focuses on homicides, urban crime and mass shootings. But the overwhelming majority of gun deaths are suicides.

When Dorothy Paugh was 9, her father bought a pistol and started talking openly about ending his life. Her mother was terrified but didn't know what to do.

"She called our priest and called his best friend," Paugh recalled. "They came and talked to him, and they didn't ask to take his gun away."

Her father was 51 when he shot himself to death.

"One morning — it was a hot August day — he said, 'Take the kids to the pool.' There were five of us, and she piled us in the station wagon. We had a great time until they announced over the loudspeaker that the police were there to take us to the hospital," Paugh said.

Six years ago, in 2012, it happened again. Paugh's son Peter bought a pistol, walked to a nearby park and shot himself. He was 25.

"It was so shattering, so catastrophic," Paugh said. "He made a 911 call to the police because he said he didn't want any children playing in the woods to come upon the gun and his body."

The conversation around gun violence in the U.S. usually focuses on homicides, urban crime and mass shootings. But the overwhelming majority of gun deaths in America don't involve bad guys with guns. They're caused by people deliberately harming themselves. In fact, Paugh's harrowing experience echoes again and again across America, with more than 60 gun suicides every day.

What the research tells us about guns and suicide

The Centers for Disease Control and Prevention's best data, from 2006 through 2016, show that roughly 218,000 Americans ended their lives using a firearm over that period.

"I believe we have a major public health crisis that we're not doing nearly enough about," said Jennifer Stuber, policy director of Forefront Suicide Prevention at the University of Washington, which works to educate people in gun culture about the risks of firearm suicide.

Stuber's husband ended his life with a firearm in 2011.

"The public is really misinformed about this issue," she said. "They think it's homicide. But 60 to 80 percent of gun deaths are suicides, depending on what state you're in. So we have to start raising awareness about this."

Paul Nestadt, a psychiatrist at Johns Hopkins who studies suicide at the School of Public Health, agreed.

"As I looked into suicide more and more, it became very clear that access to lethal means, specifically guns, was one of the most important risk factors that we could address," he said.

Suicide attempts are fairly common, Nestadt said, but usually, they're unsuccessful. The data show that having a gun available in the home or workplace make those attempts at self-harm far more likely to succeed.

Researchers say suicide tends to be a highly impulsive act. Studies show that if you can limit access to the deadliest means of self-harm, like a pistol or a shotgun, the moment of crisis will often pass quickly. People contemplating suicide usually won't go looking for another way to hurt themselves. Also, people who survive a suicide attempt, after using less lethal means, rarely try again.

Another important finding in Nestadt's research and other studies shows that the people most at risk of gun suicide tend to be white men in America's small towns. That means they're the people most deeply attached to gun culture.

"Since it tends to be more rural, more white, definitely more male, and somewhat older [Americans] that have more firearms, they also have the higher suicide rate by firearms," he noted.

Some inside gun culture acknowledge the risk

People inside gun culture and the firearm industry don't dispute the statistics, but they have often downplayed the risks, arguing that guns actually make you safer if they're in the hands of good people. But that is starting to change, with more gun rights activists acknowledging firearms can be risky, even when owned by law-abiding citizens.

"It's touched close to me," said Alan Gottlieb, co-founder of the Second Amendment Foundation in Washington state, one of the oldest gun rights groups in the U.S. One of his employees fatally shot himself.

"We, of all people, would like to solve this problem more than anybody. It would surely help us in the gun debate from our side," he said. "And likewise, it would save a lot of lives."

In their response to the high number of gun-related suicides, the industry and activist groups overwhelmingly favor education and voluntary risk-reduction efforts over regulation.

Gottlieb's group and other gun industry-related organizations, including the National Shooting Sports Foundation, have joined the effort to raise awareness of the risks. A growing number of people in gun culture say this is a personal issue. They've seen friends, family and customers die of suicide.

Robin Ball, a gun store and shooting range owner, appeared in a training video designed to educate people in the gun industry as well as potential gun buyers about suicide prevention. In 2015, she experienced gun suicide firsthand when a customer shot himself to death at her shooting range.

"It's not something I want our staff to ever go through again," Ball said. Now she says her employees are better trained and much more cautious when selling a firearm. "I'll have an employee who will say, 'Hey, the hair on my neck is standing up, I don't want to do this [gun] transfer.' "

One of the main national partners for the gun industry in this effort is the American Foundation for Suicide Prevention. CEO Robert Gebbia says his organization set a national goal to stop the steady rise of suicide deaths and then cut it by one-fifth. His team realized it couldn't do that without reaching gun owners.

"Unless you can do something about the numbers of people who die by suicide using a firearm, you really can't get to that 20 percent [reduction]," he said. Gebbia said his team spent a year negotiating with the gun industry, developing this pilot project.

"They agreed to incorporate our information. It had more credibility, more acceptance. I think if we had walked into the gun shops, our volunteer, they might have been suspicious."

Given the number of gun suicide deaths — more than 21,000 a year — this experiment may sound modest. But the debate over guns and violence in America is deeply polarized. This is a rare collaboration and supporters hope voluntary education and outreach will save lives.

Still, critics say industry groups such as the National Shooting Sports Foundation are doing the bare minimum given the scale of the public health emergency.

"I think it's window dressing," said Erin Dunkerly, an anti-suicide activist whose father ended his life with a firearm in 2006. "I think it's a way for the NSSF to assure people that, 'don't worry, we're doing this nice work in the community.' "

Dunkerly says that for the most part, the industry hasn't embraced gun storage laws and other regulatory measures that safety experts say might rapidly cut America's suicide rate.

Dorothy Paugh, who after her son's death in 2012 emerged as a leading gun control activist in Maryland, also wants the warnings to potential gun buyers to be much more blunt.

"I really wanted to shake that notion, which is marketing hype, that guns make people safer," she said. "The vast majority of the time that is just not true."

Still, Paugh said groups that oppose most gun control laws have shown some flexibility when it comes to suicide prevention measures. She helped push a so-called red-flag law through Maryland's legislature earlier this year that allows police to temporarily confiscate guns from people at risk. "The state NRA did not oppose what finally came out and the governor had spoken up and he's a Republican and you know [he said] 'let's get this done.' "