Accessibility links
Heavy Weapons Training May Cause Brain Injuries, But The VA Doesn't Cover It The Department of Veterans Affairs is trying to figure out how to deal with veterans who may have brain damage from firing powerful weapons. 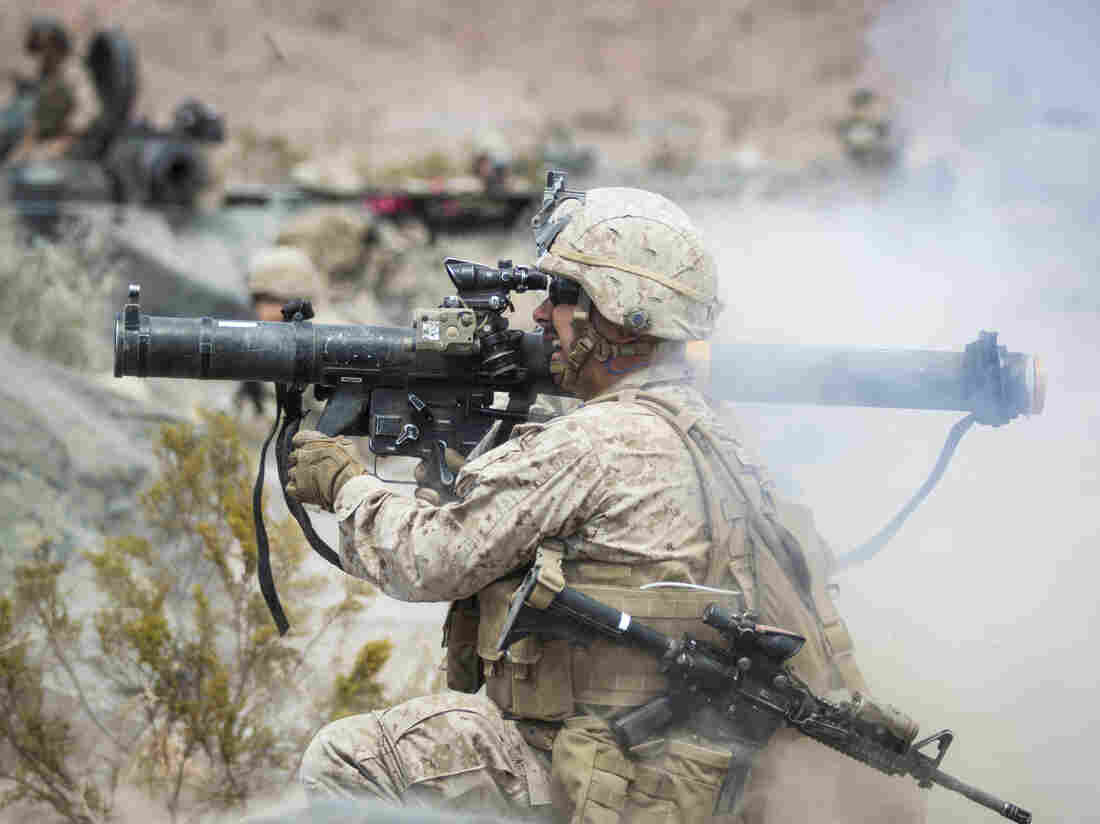 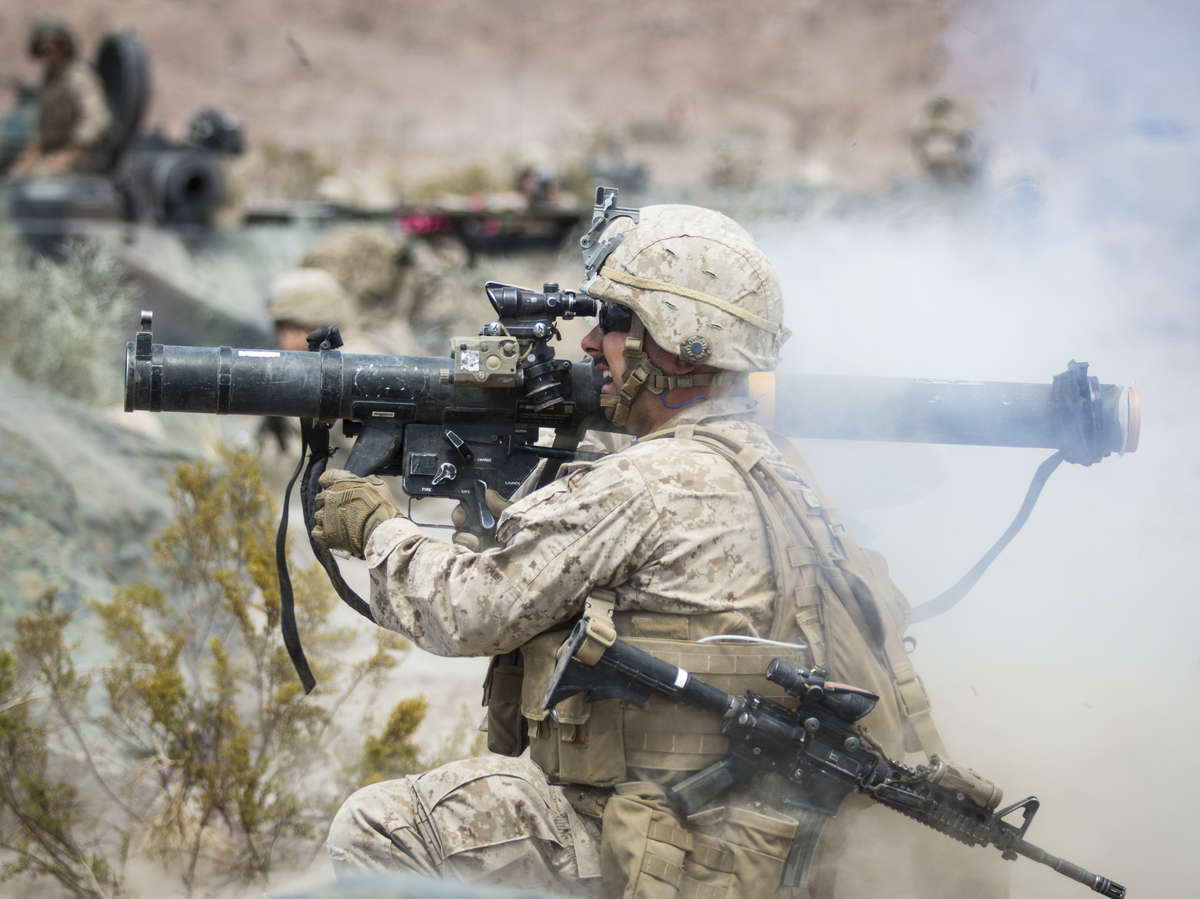 Heavy weapons like this shoulder-launched multipurpose assault weapon deliver a powerful blast to the shooter's head.

Daniel, a Marine Corps veteran, used to fire a rocket launcher called the shoulder-launched multipurpose assault weapon. Two decades later, he still experiences dizzy spells and disorientation. But the Department of Veterans Affairs doesn't have a category for vets like him, who may have sustained traumatic brain injuries from training rather than combat.

We heard yesterday from a Marine named Daniel. He spent years firing rocket launchers. Now he thinks that experience may have injured his brain.

DANIEL: I lose my spatial orientation. I don't know where I am. Vision gets blurrier, even sound is kind of muffled.

CORNISH: But when Daniel went to the Veterans Affairs Department for help, he discovered that the VA doesn't have a category for people like him. NPR's Jon Hamilton reports on how the VA is dealing with veterans who may have a new kind of brain injury, one caused by the weapons they fired.

JON HAMILTON, BYLINE: Daniel, who asked us not to use his last name, used to fire a rocket launcher called the Shoulder-Launched Multipurpose Assault Weapon or SMAW.

HAMILTON: That meant his head was just inches from the explosion used to launch each rocket. And during his training in the late 1990s, Daniel began to have episodes where he'd feel dizzy and disoriented. Now, 20 years later, those symptoms can still return when he turns his head quickly or stumbles.

DANIEL: It's disturbing to me. And it is terrifying to me.

HAMILTON: When Daniel first went to the VA, doctors thought he might just have a hearing problem. But his hearing was OK, so they send him home. Years went by. Daniel went to college. Then he got a job in Northern California. But his symptoms never went away. Meanwhile, military scientists were learning how the invisible blast from an explosion could damage the brain, including areas involved in balance and spatial orientation. Then just a few months ago, Daniel heard a story on NPR suggesting that certain military weapons might be powerful enough to give the shooter a traumatic brain injury or TBI.

DANIEL: I went back to the VA. And I said, I want to be tested for TBI. And they said, great.

HAMILTON: They handed him a questionnaire.

DANIEL: Question one was, what was your combat zone? So I didn't know how to answer that.

HAMILTON: His time with heavy weapons was before the wars in Iraq and Afghanistan, so he hadn't been in combat.

DANIEL: Question two, were you hit by an IED? Was it a grenade explosion, a bomb dropped too close to you? So I couldn't actually answer the questionnaire.

HAMILTON: All he'd done was fire a rocket launcher in training exercises over and over and over. And Dr. Joel Scholten, who's in charge of physical medicine and rehabilitation for the VA, says he's seen quite a few veterans like Daniel. The conversation usually goes like this.

JOEL SCHOLTEN: While I was training, we fired a certain type of weapon. I felt dizzy or had some ringing in my ears after that.

HAMILTON: Then Scholten asks if the veteran was ever near a bomb blast or took a blow to the head. Many say yes. And for them, VA guidelines call for a full examination for traumatic brain injury. But there's no obvious category for veterans like Daniel. That's because there still isn't clear evidence that training with heavy weapons can cause long-term problems with things like memory, thinking and balance.

HAMILTON: From a medical perspective, the lack of a box to tick is not a big deal. Scholten says treatments are usually designed to improve a patient's symptoms regardless of the cause.

SCHOLTEN: For instance, someone with cognitive or concentration impairments, we would focus our therapy on how to improve concentration.

HAMILTON: But paying for therapy is another matter. The VA gives priority to veterans whose medical problems can be linked to their service. And since military scientists still aren't sure whether firing a powerful weapon can have long-term effects, Daniel says the VA is sending him the bill. He's being asked to pay out-of-pocket for high-tech brain scans and other tests.

DANIEL: I love the VA. I have nothing bad to say about the VA. The individuals there get it. They really do. But their hands are typically tied by their process.

HAMILTON: Dr. Scholten says the VA hopes that ongoing studies will make it clear whether people like Daniel could have been harmed by the weapons they fired. And he says the results of those studies will be used to update the VA's guidelines on who gets checked out for a traumatic brain injury.

SCHOLTEN: In the next iteration, will we or should we expand to include training exposures? Possibly so.

HAMILTON: If they do, it could mean evaluating the brains of hundreds of thousands of veterans who trained with weapons like the one Daniel shot. Jon Hamilton, NPR News.