Accessibility links
Wyoming Gives 22 Winners The Chance To Hunt Grizzlies — Or Not A whopping 7,000 people vied for the chance to hunt Wyoming grizzly bears for the first time in 44 years. Many entrants in the permit lottery said if they won, they would sit out the hunt. 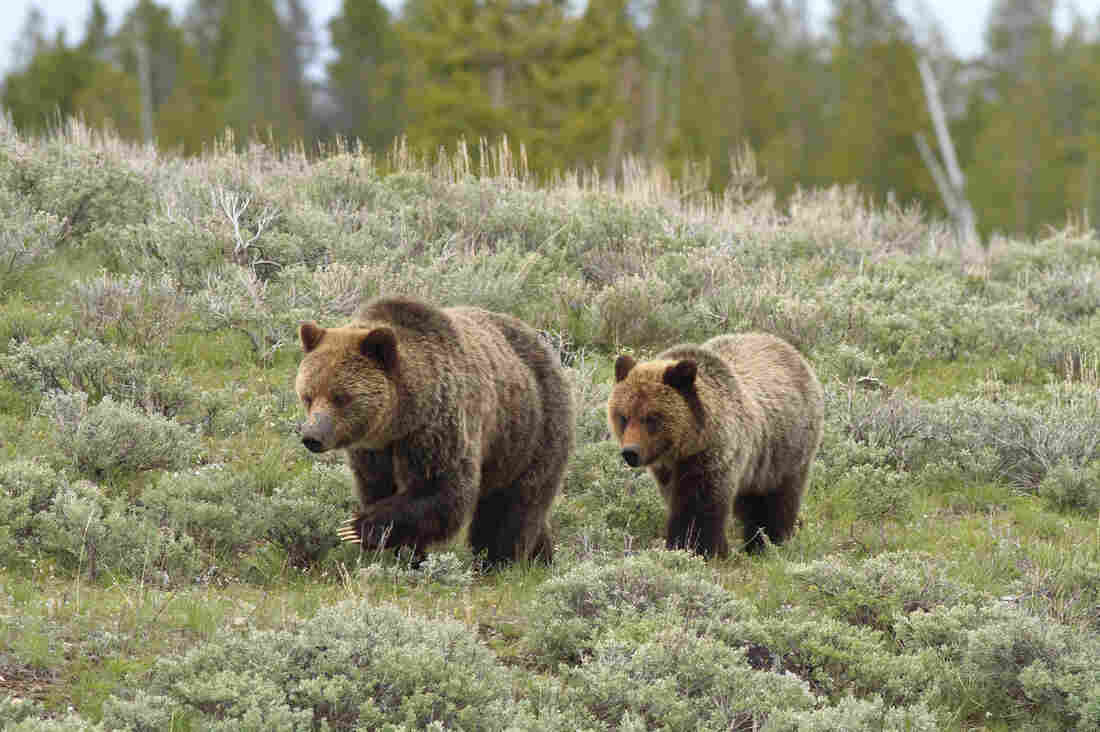 Sow Grizzly and cub in Wyoming.

Thursday morning, hopeful applicants for a historic grizzly bear hunting license found out whether they were successful or not.

Up to 22 grizzly bears can be hunted this fall in the first grizzly bear hunt in Wyoming since the bear was listed as threatened 44 years ago.

Tom Mangelsen, a Wyoming-based nature photographer, snagged a license. He chronicled the life of the now famous bear "Grizzly 399" and co-authored a book about the bear.

Mangelsen will use his tag to photograph a grizzly, not kill one.

"The time has come [in] 2018 to really think about the value of wildlife for what it is for everybody," Mangelsen says. "The public has the right to see bears and the hunters do not have the right to take that away from the public."

Mangelsen's win was publicized by the Jackson-based group Shoot'em With A Camera, which encouraged opponents of the grizzly bear hunt to apply for a license. According to Wyoming Game and Fish grizzly bear hunting regulations, 22 of more than 700 bears estimated in Wyoming will be up for grabs between Sept. 15 and Nov. 15. Ten of these bears can only be killed in what is known as the Demographic Monitoring Area (DMA), an area around Grand Teton and Yellowstone National Park. If one female is killed in the DMA, the hunt in that area will automatically be over. Only one hunter can be in the DMA at a time with a 10-day limit.

The 10-day limit was created as a response to people in support of the grizzly hunt who feared it could easily be hijacked by activists who would buy a license but not use them. When the time limit was announced in May, Brian Nesvik, Wyoming Game and Fish's chief game warden, said it was changed to be able to provide the hunting opportunity to as many people as possible.

"So we don't have one person who decides they want to take the whole season and use [those] two months," Nesvik says. "This would prohibit everybody else from being able to hunt."

Mother Bears Are Staying With Their Cubs Longer, Study Finds

Of the three states that could have allowed a grizzly hunt, Wyoming was the only state to introduce a true hunting season. Idaho is allowing one grizzly to be hunted while Montana passed on the opportunity.

License winners for the Wyoming DMA areas have ten days to pay the license fee after Game and Fish contacts them. The fee is $600 for Wyoming residents and $6,000 for others.

Tribal and conservation groups have filed several lawsuits over the federal government's decision to take grizzlies off the Endangered Species List. They argue the decision fails to address new issues that threaten the bear, like the loss of critical food sources. The next hearing is scheduled for August, before the hunt is set to begin.