Accessibility links
Opinion: The U.S. And North Korea Have Made Progress. Here's How They Can Keep It Up North Korea's moves to return U.S. remains and dismantle sites are not meaningless. Now, the U.S. should take the denuclearization bull by the horns, writes a veteran U.S. negotiator with Pyongyang. 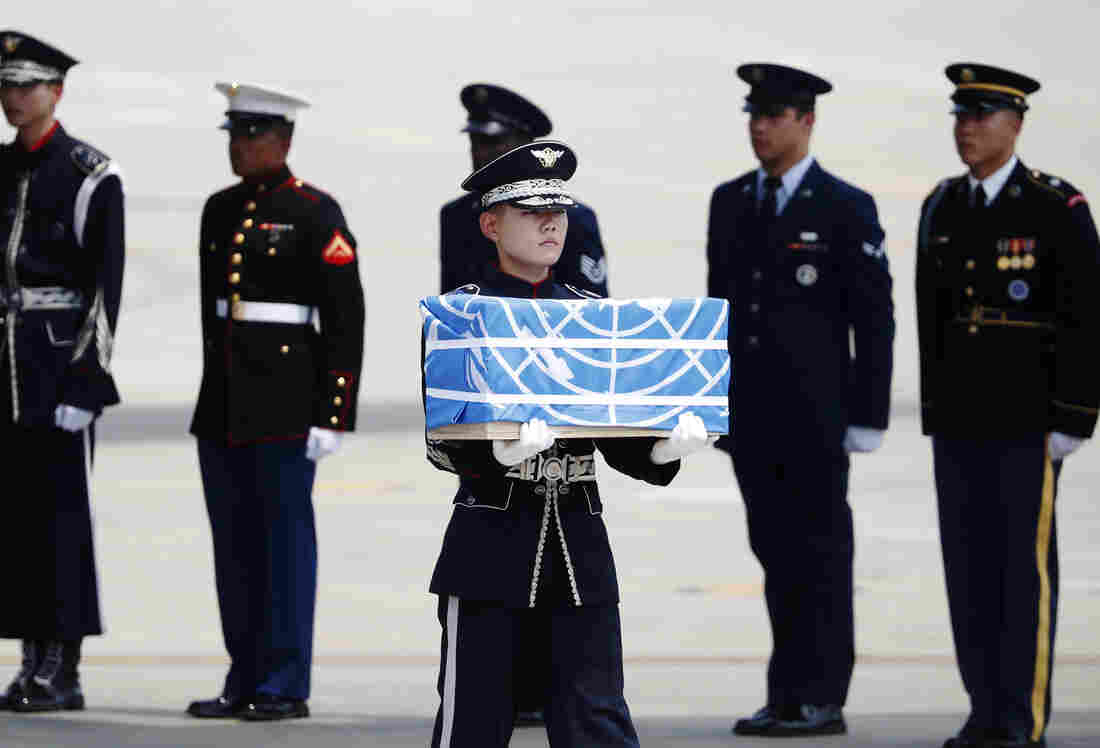 A soldier carries a casket containing possible remains of a U.S. soldier who was killed in the Korean War during a ceremony at Osan Air Base in Pyeongtaek, South Korea, Friday. Kim Hong-ji/AP hide caption 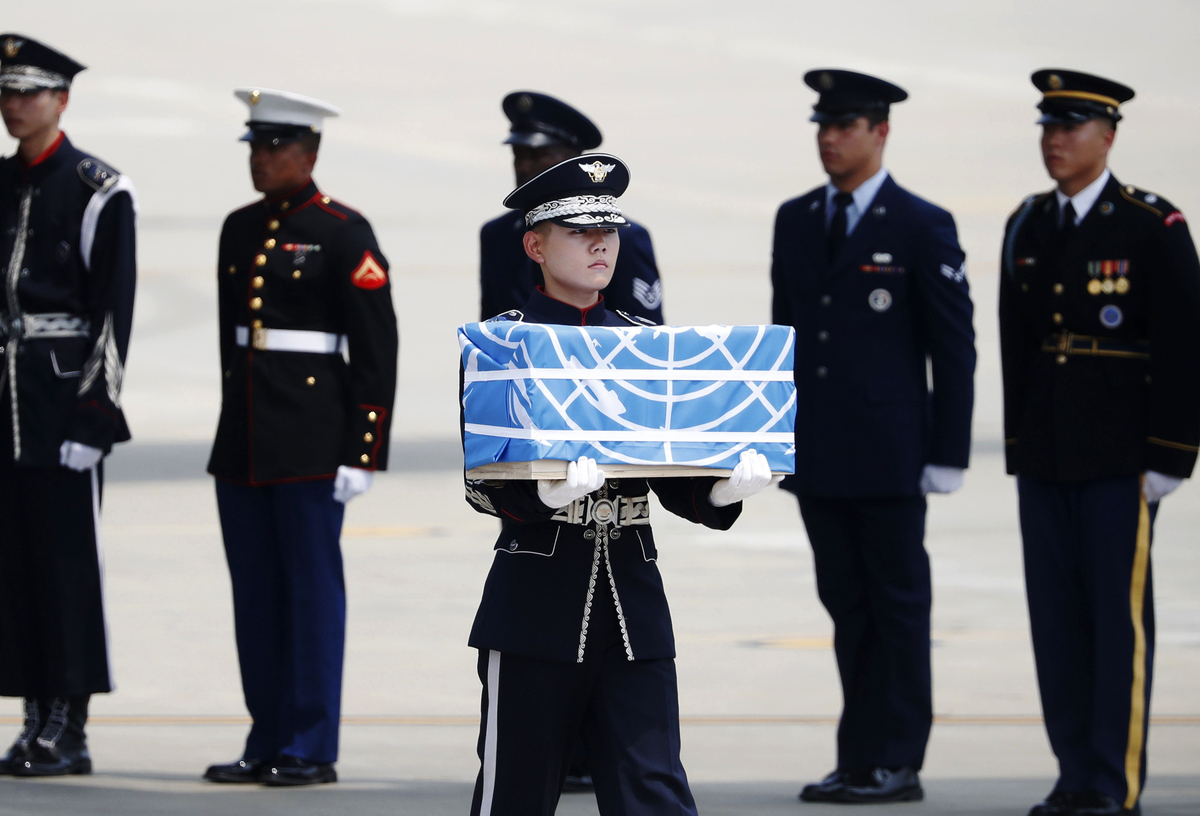 A soldier carries a casket containing possible remains of a U.S. soldier who was killed in the Korean War during a ceremony at Osan Air Base in Pyeongtaek, South Korea, Friday.

Joel Wit (@Joel_Wit38) has participated in face-to-face talks as a State Department official and as a private citizen with North Korea for 25 years. He is a senior fellow at the Henry L. Stimson Center and director of the 38North project.

While the press has been full of stories about frustration with North Korea's lack of rapid follow-through on its denuclearization pledge at the Singapore summit, President Trump and Secretary of State Mike Pompeo are right in saying that the United States needs to give that process time.

North Korea recently began the apparent dismantling of key facilities at its Sohae space launch center, which is a step in the right direction, since they might be used to test ballistic missiles. So is Pyongyang's return of possible remains of American soldiers killed in the Korean War intended to help improve the political atmosphere for further talks.

But there is a long road ahead. And despite the political momentum created by the summit, there remains a danger that the effort will stall without steady progress.

Constant public sniping about the summit and its aftermath has obscured the positive steps taken by Washington, Seoul and Pyongyang over the past few months. No one would have predicted at the beginning of 2018 all the progress there has been to date — especially the U.S.-North Korean summit and the North's halting of missile and nuclear tests, the dismantlement of the nuclear test site and the apparent start of dismantlement of a major missile test facility — and now the return of possible remains of U.S. soldiers. Indeed, at the beginning of the year, most experts were asserting that the change in Kim Jong Un's line toward engagement was just another meaningless peace offensive. 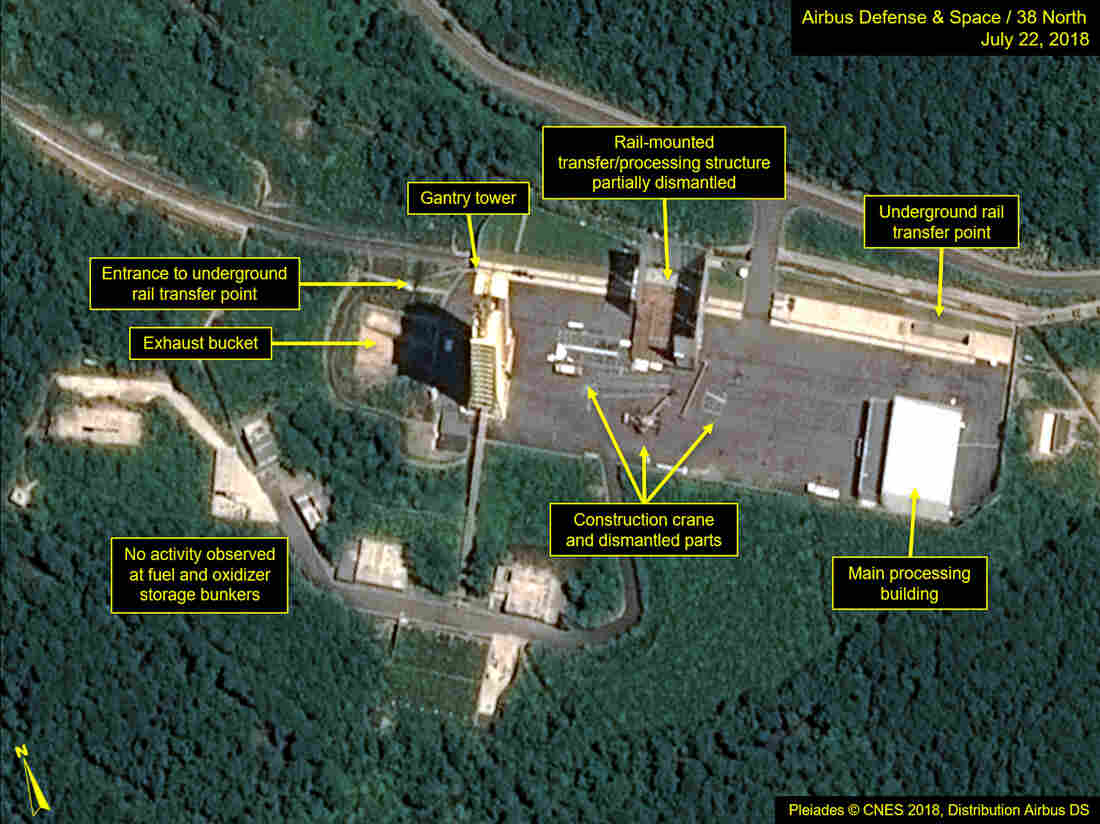 This July 22 satellite image, released and annotated by 38 North on Monday, shows what the U.S. research group says is the partial dismantling of the rail-mounted transfer structure (center) at the Sohae launch site in North Korea. Airbus Defense & Space/38 North via AP hide caption 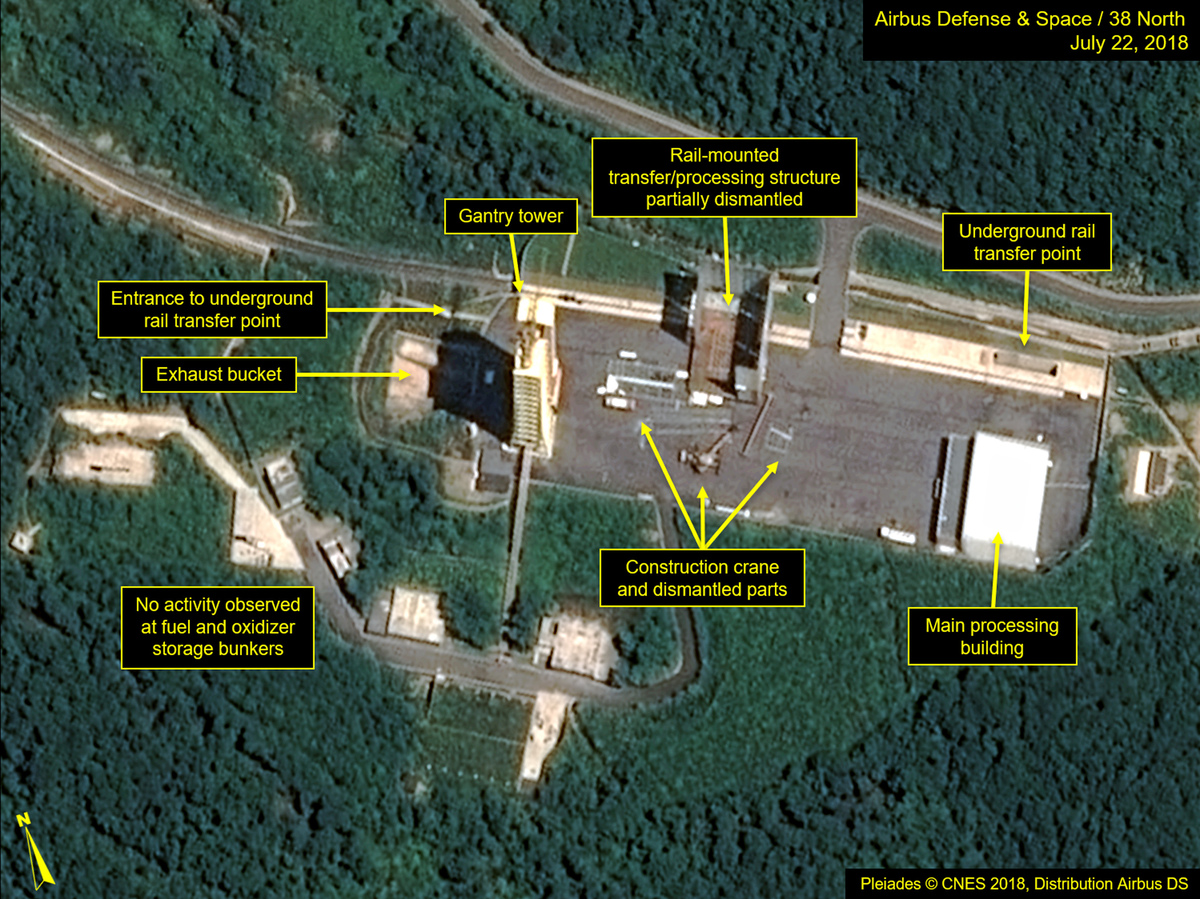 This July 22 satellite image, released and annotated by 38 North on Monday, shows what the U.S. research group says is the partial dismantling of the rail-mounted transfer structure (center) at the Sohae launch site in North Korea.

Critics are right in asserting that, so far, none of these tangible measures touch on the core challenges of denuclearization — finally ridding Pyongyang of its nuclear weapons and the missiles to deliver them. However, dismissing them as mere window dressing is a mistake. Though limited, they are not meaningless in terms of their impact on North Korea's ability to modernize its nuclear and missile forces. These steps are important to build confidence and provide space for what are likely to be complicated negotiations to deal with central security concerns on both sides.

Washington now needs to take the denuclearization bull by the horns, first by recognizing that the United States has leverage over North Korea, not solely because of international sanctions, but also because of Kim's major focus on reforming his nation's economy. To do that, the North understands it needs, if not close, then at least less hostile, relations with the United States. And that, in turn, means ending what the North Koreans call the U.S. "hostile policy," including its constant emphasis, both in private and public, on ending the Korean War halted only by the temporary armistice that has been in place for 65 years.

Opinion: What I Learned From Long Months Of North Korea Talks

In 2016, as North Korea escalated its nuclear and missile tests, I and a group of former U.S. government officials met overseas with North Korean government officials at a time when they seemed to be demanding negotiations to reach a peace treaty before talking about denuclearization. We were concerned that position was a trap since peace talks could drag on for years, delaying any hope of ending the nuclear threat. In fact, the North Koreans had in mind a parallel process, kicked off by a trilateral declaration by the U.S., North Korea and South Korea that the era of the war was over.

That is also the North Korean position today, highlighted by the Singapore summit declaration in June that pledges to establish "new U.S.-DPRK relations" and to "build a lasting and stable peace on the Korean Peninsula."

North Korea's Foreign Ministry issued a statement after Secretary of State Pompeo visited Pyongyang in early July. While the Western media fixated on a line that talked about America's "gangster-like demand," in fact the statement sent much the same message as the Singapore declaration.

Some experts continue to warn that we could get bogged down in peace talks and never have serious nuclear talks. But rather than viewing the North Korean position as a trap, the Trump administration should see it as positive leverage to secure its denuclearization objectives, starting with the following steps:

Secure information on Pyongyang's nuclear and missile programs: Since there are still uncertainties about North Korea's effort, a declaration will be essential. While the United States could try to secure a complete declaration right away, our judgment is that will prove to be a bridge too far, given years of tense relations. A more limited but significant initial step forward would be for the North to come clean on where it produces the nuclear material to build bombs — we may not be sure about some hidden plants — and how much material it has produced. Both will provide a firm basis for subsequent steps to verifiably freeze, roll back and eliminate its nuclear arsenal.

The Trump administration should also pick up on hints in the same Foreign Ministry statement about the North's willingness to curb the production of ballistic missiles by asking for information on where those missiles are assembled and how many have already been built. Again, these steps would be logical building blocks for further restrictions.

Build cooperation for on-site verification: In 1998, I led a team of Americans to inspect a North Korean military base near the Chinese border where the U.S. suspected Pyongyang was housing an underground nuclear reactor in violation of a denuclearization accord with the United States. The inspection, which found that there was no underground reactor, worked because of North Korean cooperation built on improving political relations between the two countries.

Today, however, after years of hostility, rather than seeking highly intrusive inspections right off the bat, it might be wise to first work out cooperation-building measures. For example, the North could allow foreign inspectors to visit its nuclear test site and other facilities Pyongyang has been dismantling to confirm its claims.

Get the denuclearization ball rolling: Since it isn't going to happen overnight, the U.S. and North Korea need to start work on a negotiated, phased agreement that directly affects the North's ability to produce weapons.

For example, North Korea could convert the Yongbyon nuclear facility — where it produces fissile materials indispensible in building nuclear weapons — to a scientific and industrial park engaged in helping to modernize the North Korean economy. That would require an immediate suspension of all activities at the site to be observed by foreign inspectors, a permanent end to those activities by disabling and dismantling key facilities and moving to establish new ones that could gainfully employ the thousands of engineers, technicians and workers at Yongbyon previously engaged in building weapons. One possibility is the production of radioisotopes used in nuclear medicine that are in short global supply.

Any new agreement should also include the dismantlement of all remaining rocket engine test sites in North Korea that could be used to develop long-range missiles.

All of these steps would present important progress, but they can't be achieved without hard work and, most importantly, a serious negotiating effort. That hard work cannot be done by Pompeo during two-day visits to Pyongyang or a U.S.-North Korean "working group" that meets at the Demilitarized Zone that divides the two Koreas. It will require a sustained, face-to-face effort that may take weeks, and probably months.

Quickly appointing a special representative to lead talks with the North is a step in the right direction. But that will not be enough, given the enormous task ahead. Secretary Pompeo will have to remain closely involved, perhaps participating in talks at key junctures to resolve tough issues. And so will President Trump through more summits with Kim Jong Un.