Accessibility links
The 'Babe Ruth' Of Ice Cream Gives The Scoop On His 71-Year Career The town of Peabody, Mass., calls him "The King of Cool." Allan Ganz reflects on how his father introduced him to the business, and the cherry on top of his lifelong career: meeting his wife. 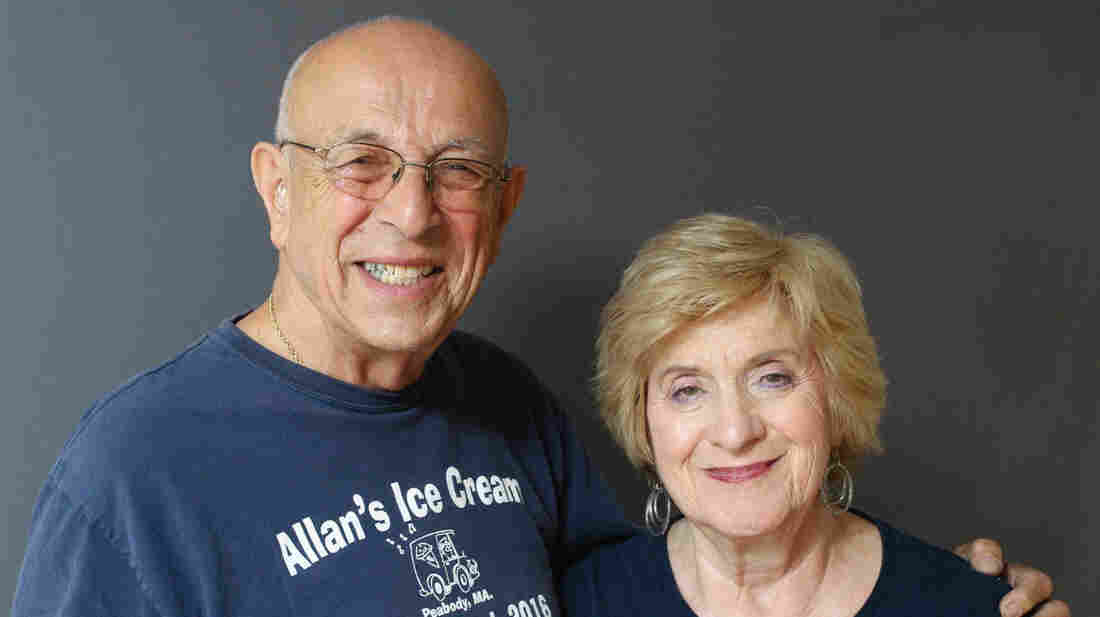 Allan Ganz and his wife, Rosalyn, met during his 71 years in the ice cream business. The couple looks back on Allan's life of local fame in a StoryCorps interview this month in Peabody, Mass. Camila Kerwin/StoryCorps hide caption 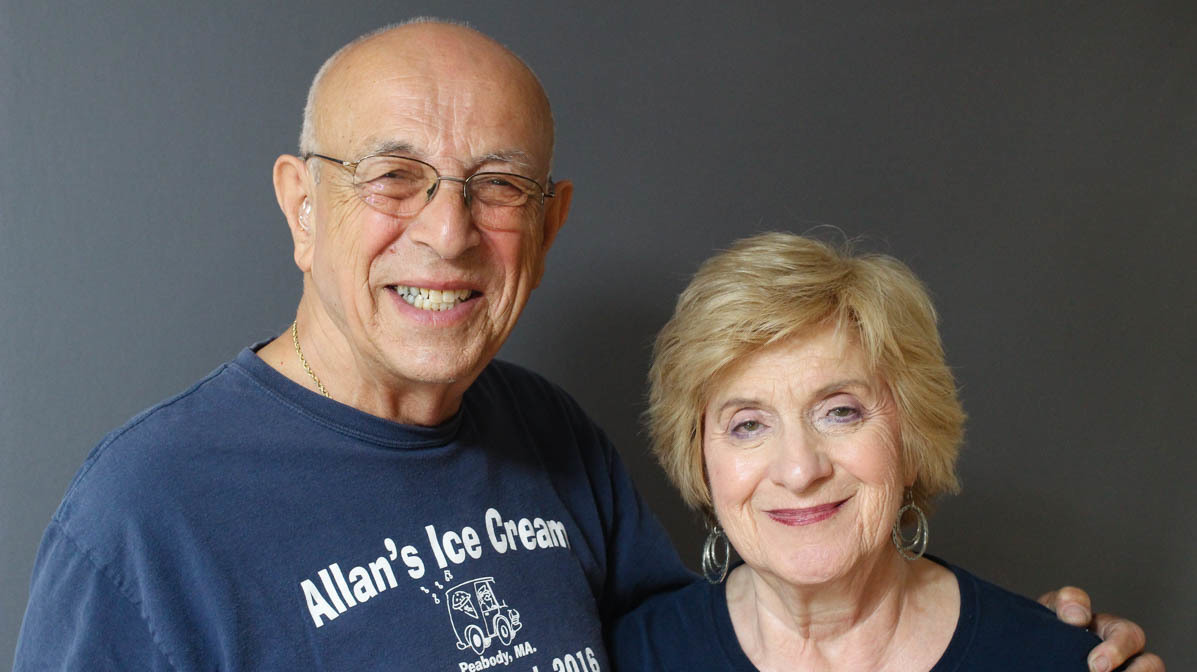 Allan Ganz and his wife, Rosalyn, met during his 71 years in the ice cream business. The couple looks back on Allan's life of local fame in a StoryCorps interview this month in Peabody, Mass.

Every summer since 1977, the town of Peabody, Mass., has heard "Yankee Doodle" coming from Allan Ganz' ice cream truck.

Over that time, Allan has watched his customers grow up — and become parents and even grandparents. The town loves him so much it has a street sign designating him "The King of Cool."

It was his father, a popular ice cream man himself, who got him into the business. "I started riding with him when I was 10 years old," Alan Ganz, now 81, tells his wife Rosalyn, 77, on a visit to StoryCorps earlier this month.

His dad was known as "The Jolly Man;" Allan was "Jolly, Jr."

"In those days, ice cream was a nickel and a dime, and the ice cream trucks was just pickup trucks and they had chests built on the back kept cold by dry ice," he says.

"I got my license three days after I was 16," Allan says. That same day, his dad told him he was taking the day off and that he should take over the route. "And I went out for business."

Allan met his wife Rosalyn thanks to ice cream.

She says she would look forward to seeing the ice cream man drive through her neighborhood. "I remember hearing the truck come, getting all excited," she says.

Allan recalls how Rosalyn and her friends flocked to the truck to buy ice cream. "And I would kibitz for a few minutes and then I'd have to move on," he says. "I had to be out selling ice cream 'cause you have to make hay while the sun shines."

"But, it was in the cards for us to end up together." Rosalyn was 19 and Allan was 23 when they got married.

"Well, you were really, really cute — with hair," Rosalyn says.

Allan had been driving his dad's truck off and on for years. "I wanted to get my own truck," he says. At age 40, he finally did, selling ice cream on nights and weekends and also working during the day at the post office. 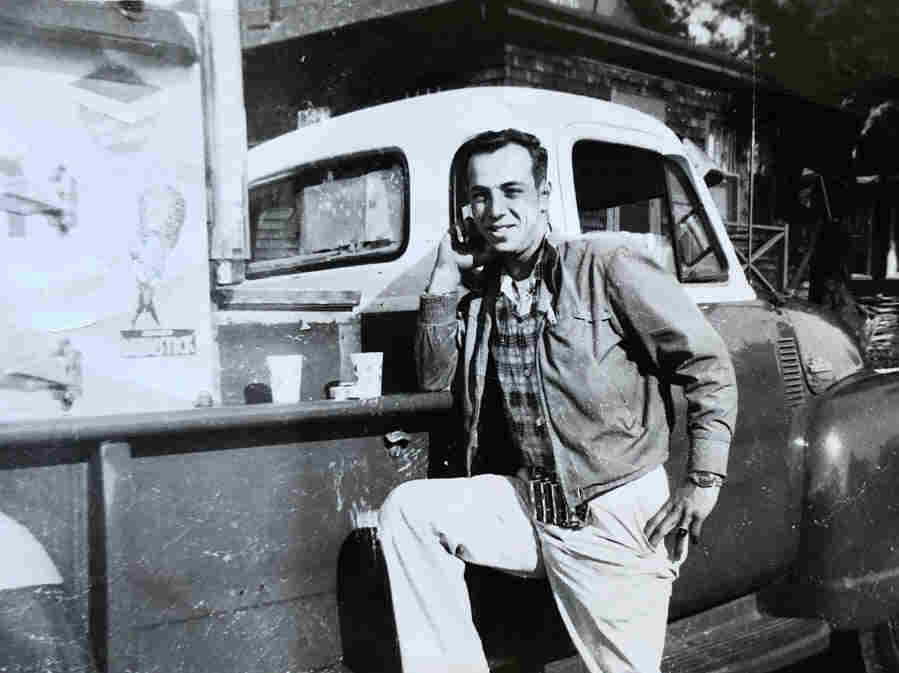 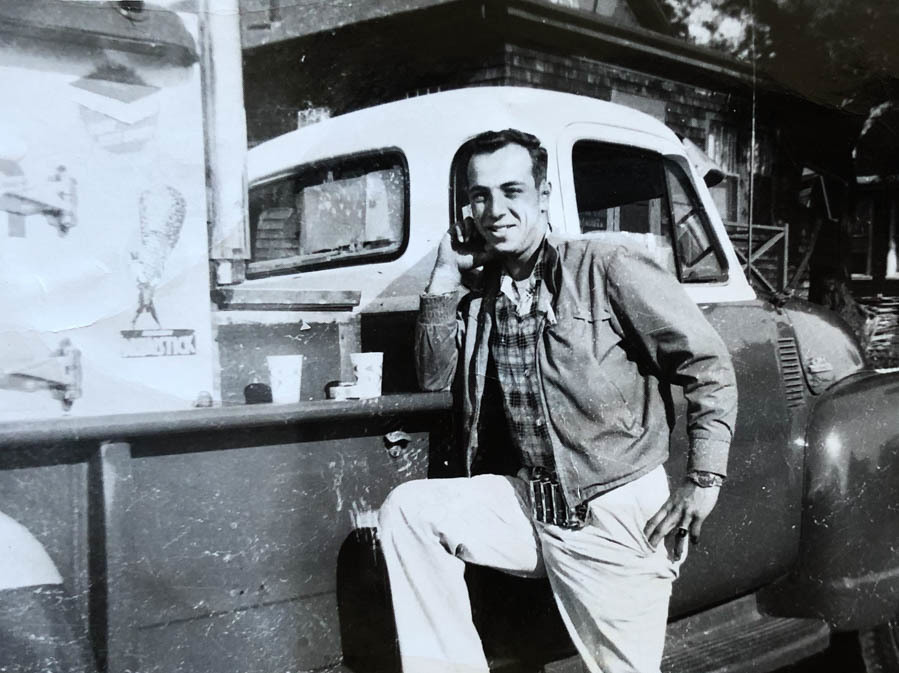 Allan Ganz, then 19, poses in front of his dad's ice cream truck.

He's been driving his ice cream truck full-time for the past 16 years. "Like Pavlov's theory — you ring the bell, they expect me," he says.

He recognizes that there were beloved ice cream men, like his dad, even before he came along. "One day, I was out selling ice cream and somebody come running up, stopped me with a couple of little kids, and he was pointing to pictures on the ice cream truck," Allan recalls. "And he says, 'I used to get these Screwballs off The Jolly Man!' I says, 'See that picture over there?' He looked up and saw a picture of my father in the truck."

This summer is likely Allan's last in driving the truck full time, though he plans to keep working at least one day a week for as long as possible.

"Ice cream is the great American pastime," Rosalyn says. "It certainly made a big difference in our life."

In the ice cream world, Allan puts himself in the hall of fame. "I don't want to sound big-headed, but ice cream has given me a name like a Ted Williams or a Babe Ruth or a Larry Bird," he says. "I have the same recognition here in Peabody."

"It has been a great ride," he says, "and the scoop is I love the business."