Accessibility links
U.S. Economy Surges To A 4.1 Percent Growth Pace In 2nd Quarter A key measure of the economy's health showed a dramatic pickup, which President Trump called "amazing." But some analysts doubt the higher growth rate will last. 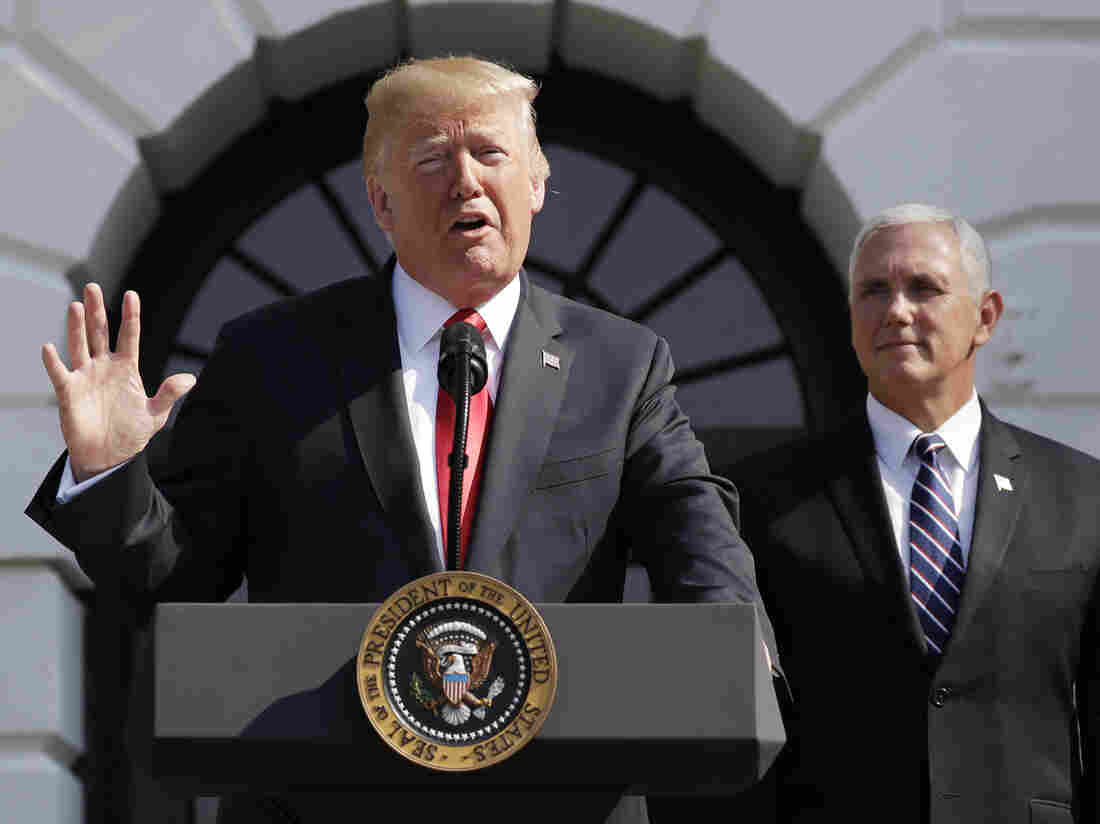 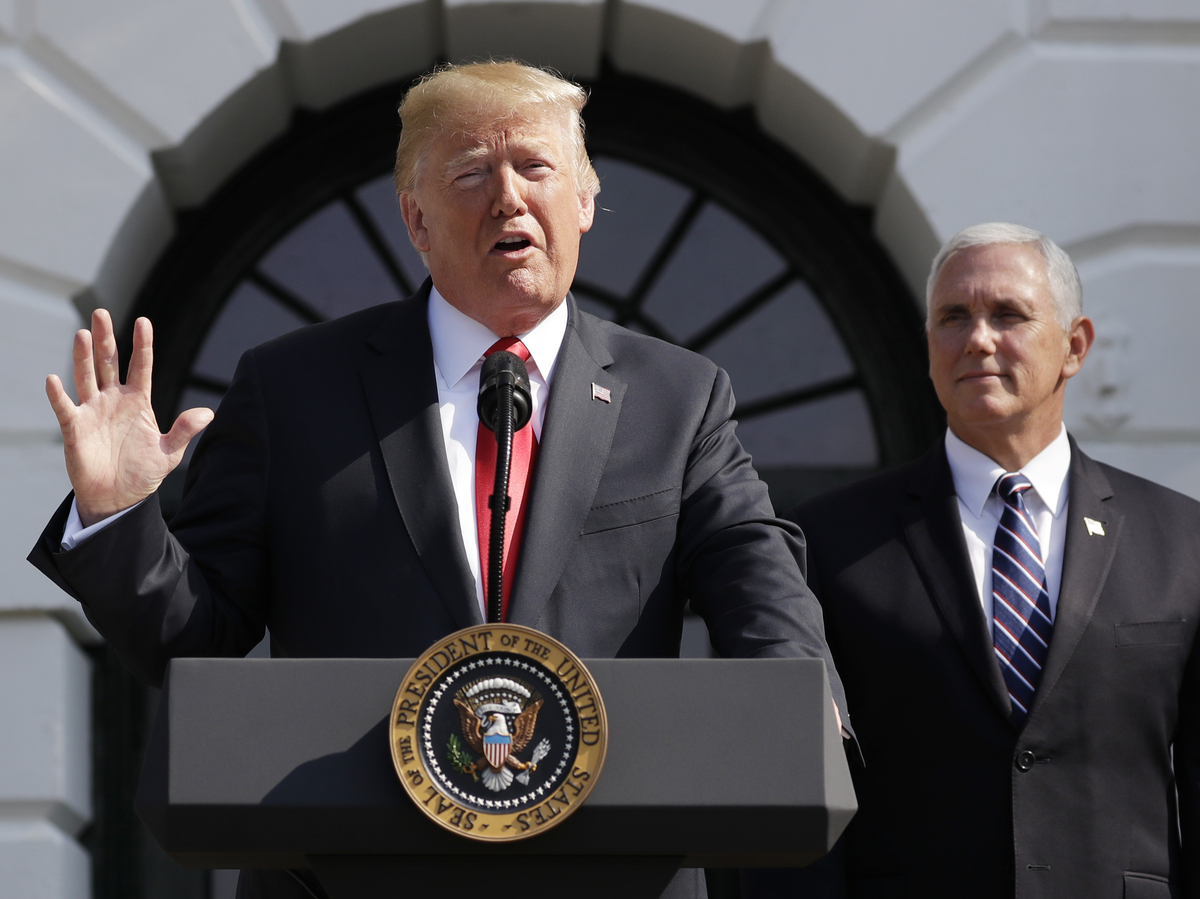 The U.S. economy had a blockbuster second quarter, with growth surging to a 4.1 percent pace, the Commerce Department said Friday. That was nearly double the first quarter rate of 2.2 percent and the strongest pace in nearly four years.

President Trump has been steadfastly claiming that his policies will catapult the U.S. economy into a much higher rate of growth — 4 percent over the next few years.

That would be about double the growth rate in recent years. And it would almost certainly mean a big boost in the standard of living for many Americans, with higher wages and better public services as the government raked in more tax dollars from a booming economy.

"We've accomplished an economic turnaround of historic proportions," Trump said in remarks at the White House Friday morning. "Once again, we are the economic envy of the entire world."

The president called the 4.1 percent rate "amazing" and said, "As the trade deals come in one by one, we're going to go higher."

Boosted by a 4-percent jump in consumer spending and a 13.3 percent surge in goods exports in the second quarter, the economy expanded at its fastest pace since the 4.9-percent rate of the third quarter of 2014.

"Consumers were really on a tear," said Ian Shepherdson, the chief economist of Pantheon Macroeconomics. Consumer spending, which accounts for nearly 70 percent of economic activity, has been growing at about 2.5 percent, he noted. "So to grow at 4 [percent] probably tells you people were spending the tax cuts that they enjoyed back in January, but that's extremely unlikely to happen again.

Peter Navarro, the top trade adviser to the president, told NPR Friday before the GDP report was released: "What we're seeing in the Trump economy is wages going up for the first time in a long time. We're seeing unemployment go down to levels we haven't seen since the 1990s. This is a strong economy. This president's economic policies are succeeding, and trade is a big part of that."

Trump called the numbers "very sustainable," adding: "This isn't a one-time shot. ... Next quarter, I think it's going to be outstanding."

But most economists say such a strong growth rate is unlikely to last.

Yet, at least for the second quarter, the stars have aligned, and, as many analysts predicted, gross domestic product grew by an annual 4.1 percent.

Most economists caution this is likely to be a one-off growth spurt and not a new sustained trend.

GDP Is Up 4.1 Percent: What That Means

GDP Is Up 4.1 Percent: What That Means

Exports are a particularly dramatic example. Shepherdson says the Trump administration's ongoing trade fight with China is a big threat to the economy. But in recent months, the trade dispute sparked an unexpected short-term boost in exports.

"We saw an enormous surge in soybean exports," Shepherdson said before the report was released. And that gave the overall export numbers a big lift. That's because, ahead of retaliatory tariffs by China on U.S. agricultural products, China went on a soybean buying spree.

But that boost in exports will now reverse because the tariffs have been imposed, Shepherdson says. And, he says, that will be a drag on the economy. "I think some of these components, which look great in the second quarter, won't look so great in the third, in particular the foreign trade numbers," he says.

"There's going to be a payback," says John Silvia, the chief economist at Wells Fargo. Both he and Shepherdson had predicted very strong second-quarter GDP growth of 4.5 percent or higher.

Still, Silvia says, "you can have a very strong second quarter," but growth will slow to about 2 percent to 2.5 percent as the export picture turn negative.

Another factor at play here is tax cuts. They're boosting the economy, but Shepherdson says that just creates "a short-term sugar rush to growth and then probably some sort of hangover eventually down the line."

He says that if the government had passed a big infrastructure plan, it would have meant long-term projects that would have helped boost growth and underlying productivity for years to come. Instead, Shepherdson says, the tax cuts gave millions of Americans a one-time income boost and that's now being spent on "on gadgets and cars and vacations." But, he says, that growth in spending will fizzle.

Silvia says the tax cut will have a longer lasting effect, but nowhere near enough to sustain 4 percent or 5 percent GDP growth. He predicts about 2.5 percent growth for 2019 — a bit better than the 2 percent of recent years. Shepherdson predicts about the same.

Just about all economists say the biggest wildcard is the ongoing trade fight with China and other major trading partners. If that escalates and disrupts supply chains and damages exports further, they say all bets are off on whether the economy will be growing at all or sliding toward a recession.