Accessibility links
Opinion: Imran Khan Has Declared Victory In Pakistan's Election. But The Military Won The military's involvement in Pakistani politics leaves no one immune and nothing sacred, write Shamila N. Chaudhary, a former director for Pakistan and Afghanistan on the National Security Council. 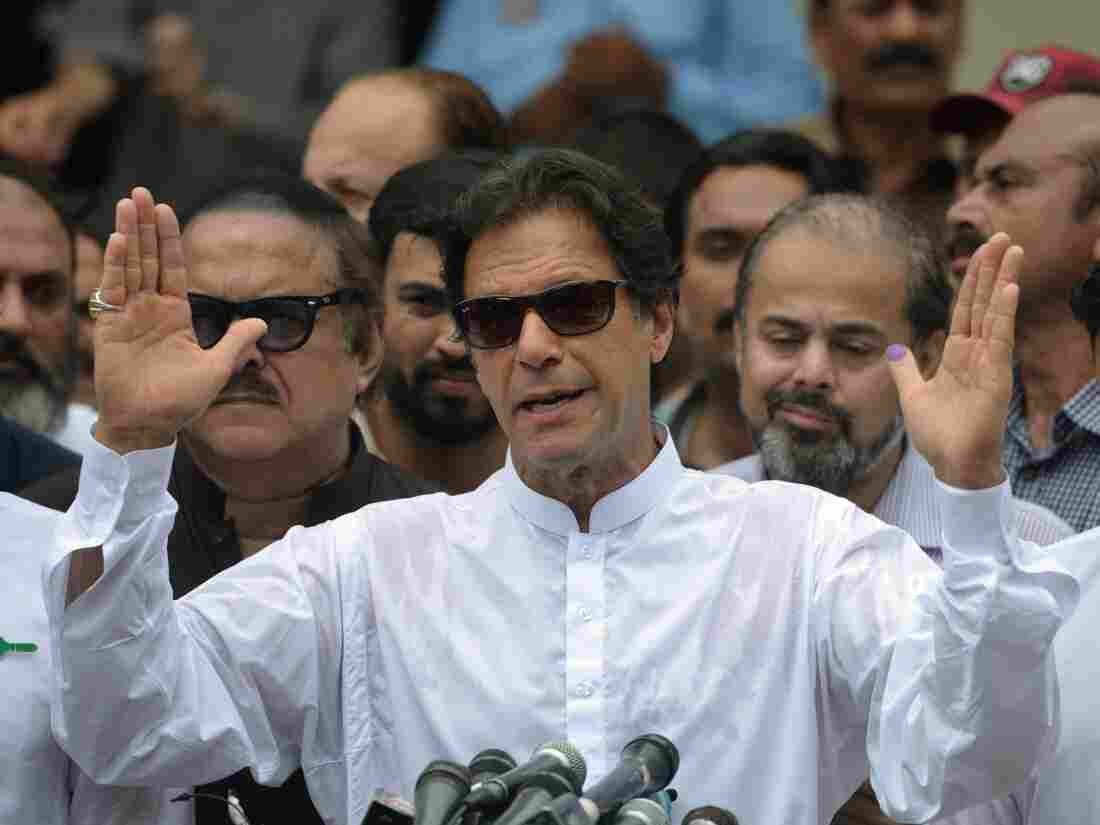 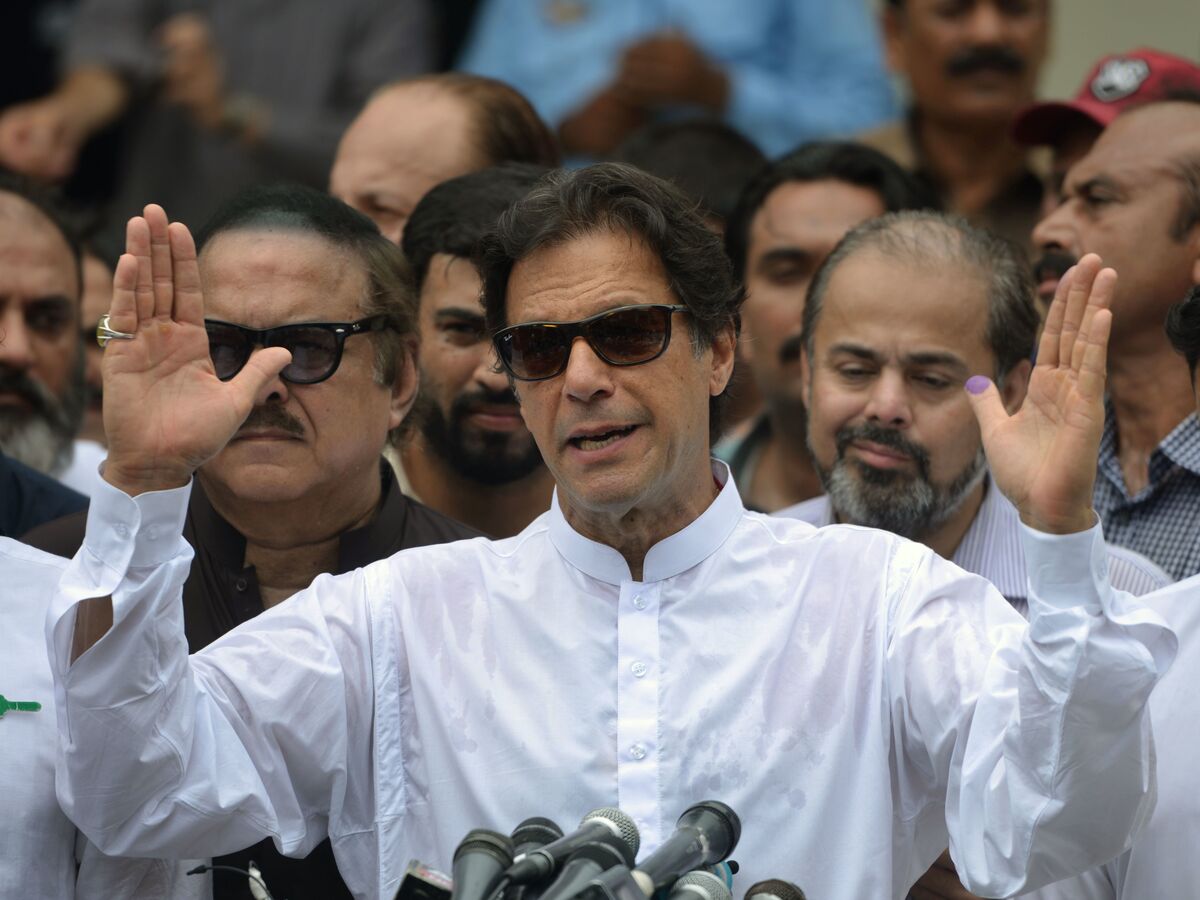 Pakistan's cricket star turned politician Imran Khan speaks to the media after casting his vote in Islamabad on July 25.

Shamila N. Chaudhary (@ShamilaCh) is senior adviser to the dean at Johns Hopkins University School of Advanced International Studies, a fellow at the school's Foreign Policy Institute and senior fellow at New America. She served as director for Pakistan and Afghanistan on the National Security Council during the Obama administration.

The Pakistani people have spoken. In Wednesday's parliamentary elections, they voted in Pakistan Tehreek-e-Insaaf (PTI), a political party led by former cricket star turned politician Imran Khan, to form the next government. PTI will most likely install Khan as the prime minister.

But have the Pakistani people told us what they want? We can't be sure, and here's why: The campaign environment leading up to the elections was heavily manipulated by pro-PTI forces, namely members of the military, judiciary and the political elite — a collection of powerful individuals and institutions commonly referred to in Pakistan as "the establishment." The civilians who join forces with the military to achieve its dominance — including a politicized judiciary that historically has been used as a tool to justify the military's extra-constitutional measures — often reap benefits typically reserved for those in uniform.

Pakistan Election Begins Amid Allegations Of Intimidation And Rigging

Many Pakistanis believe that the establishment is behind the pressure tactics directed against the electorate during this campaign season. In this election season, assassination of candidates, intimidation of the media and the imprisonment of Khan's primary rival, former Prime Minister Nawaz Sharif, no doubt silenced critical aspects of the electoral process.

Did the media report freely? Were people scared off from voting because of violence and fears of retribution? Did the judiciary's pursuit of corruption charges against Sharif distract from his party's successes in running the government for the past five years? In a place like Pakistan, where a layer of political manipulation by the establishment has clouded every election since the country's birth in 1947, we will never fully know the answers to these questions. 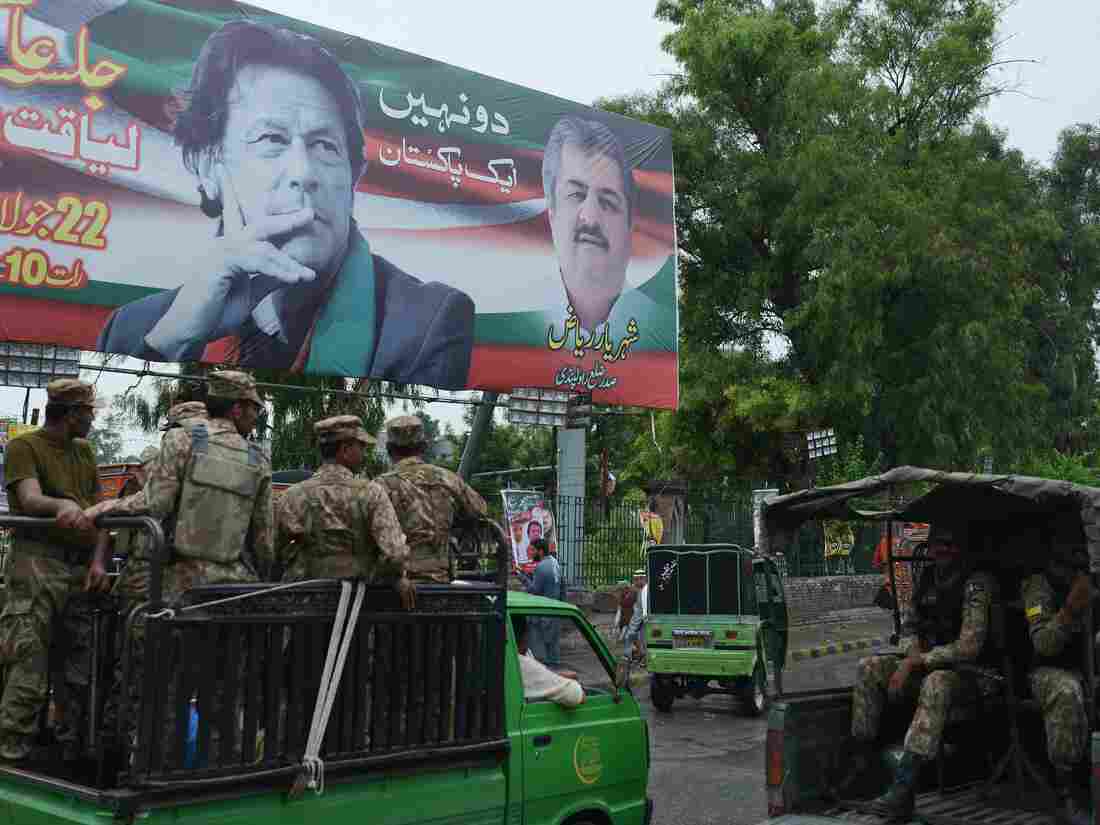 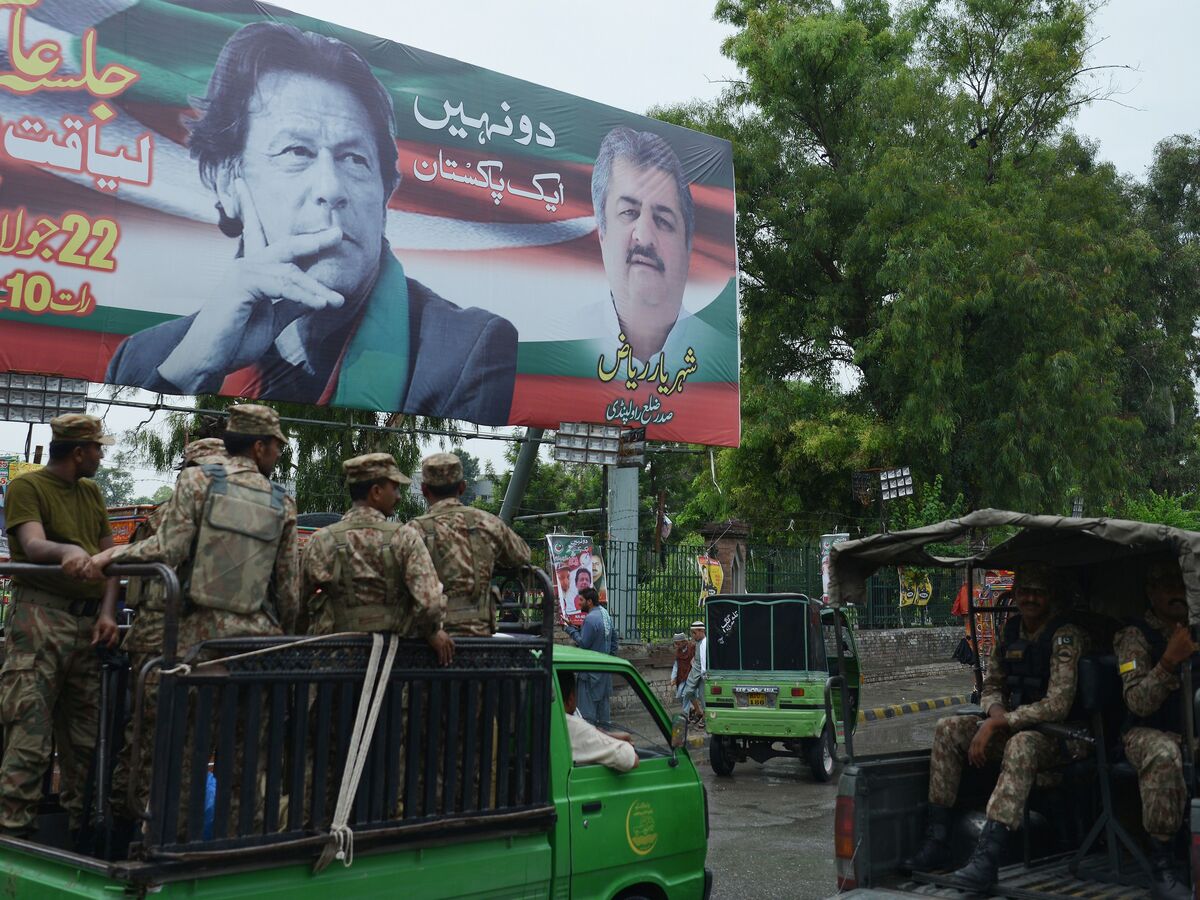 Pakistani soldiers patrol a street with a billboard featuring an image of Imran Khan in Rawalpindi.

But we're not meant to. The difficulty of ascertaining what the people want is part of the establishment's plan. It does not want a government led by Imran Khan per se. Rather, it wants a government that is weak and where civilians cannot strengthen themselves against a powerful military, which wants to maintain its influence over national security issues such as relations with India and nuclear proliferation, issues over which civilians in a democracy should have primacy.

So while Imran Khan got the votes in this election, it is Pakistan's military that has won — again.

The military has been cautious about overtly involving itself in politics in the past decade — a result of the unpopular legacy of former military ruler Gen. Pervez Musharraf, the military's negative exposure in Wikileaks documents and the difficult fight against anti-state militants. But that inclination has steadily receded over the past few years. The Pakistani military is no longer lurking in the shadows. It is walking down Constitution Avenue in Islamabad in broad daylight.

Khan, who can reach millions of Pakistanis in a way that no other politician can, is its newest foil. His popularity as a sportsman is unparalleled and his brash, populist rhetoric appeals to young, working-class voters. What better candidate to break the dominance of the dynastic former ruling party, Sharif's Pakistan Muslim League-Nawaz, in Parliament?

But the legitimacy of Khan's government will undoubtedly be questioned for the duration of his tenure. Ironically, in shaping the political environment to favor Khan, the establishment has effectively handicapped its own candidate.

With Sharif's party sidelined and Khan having to defend his legitimacy, the establishment has taken a page out of a playbook from the 1990s, when the military would pit politicians against each other to ensure weak coalition governments wouldn't unify against military influence. This era ended in 1999, when Musharraf ousted Sharif in a military coup.

The return to 1990s-style party politics has ushered in a backsliding of Pakistan's democratic culture, which begs the question: Could it also eventually lead to another coup? The makings of it are already underway, with Pakistan's politicized judiciary, compromised media, an exhausted and untrusting electorate, and a fractured political elite.

Critics of Khan will say that a soft coup has already happened and with him in place, the military already runs the show. But we must consider what the Pakistani military would do if Khan's government fails to adhere to its expectations. And there will be many opportunities to fail, from determining the imprisoned Sharif's future and rapprochement with India to working with the United States to end the war in Afghanistan.

All this talk of political manipulation distracts from the ambitious agenda Khan has for his vision of the "new Pakistan," a place where the stark divide between the poor and privileged is addressed through a welfare state system. Amidst fraught relations with Pakistan's neighbors and the United States, Khan's government will also need to define its agenda and approach with the international community. The hardest part will be how Khan refashions himself as a unifying figure who can bring together the political parties who believe his victory is a sham.

Those who came before Khan never fully realized their agendas on these and other policy matters because of lack of support from the military. "We need a chance to succeed" is a common refrain of Pakistani politicians on the subject of the country's antagonistic civil-military relations. Given his standing with the establishment, will Khan be different and get his chance?

The challenges that lie ahead mean his lifeline as prime minister is potentially not very long. In many respects, Khan stands to butt heads with the very establishment that put him in power. The military will want to protect its interests in India and Afghanistan. The judiciary will not want to go soft on Sharif. Extremist groups close to the military may not like concessions Khan may have to make on social issues to build his coalition.

To understand Khan's political fortunes and possible destiny, we should look no further than the path taken by Nawaz Sharif, who began his political career as a protégé of the military dictator Gen. Muhammad Zia ul-Haq. When Sharif first was elected prime minister in 1990, many believed the intelligence services rigged his victory. His dramatic fall from grace — he has been ousted three times as prime minister and now sits in jail — should be a reminder for the PTI and the jubilant Pakistanis cheering Khan's victory that the military's involvement in politics leaves no one immune and nothing sacred.