Accessibility links
'Garlandia' Is A Trippy, Visionary, Not Quite Sublime Graphic Novel The big new collaboration between Lorenzo Mattotti and Jerry Kramsky is visually gorgeous, lush and virtuosic — but its story of a peaceful fantasy world threatened by a crisis feels generic.

'Garlandia' Is A Trippy, Visionary, Not Quite Sublime Graphic Novel

'Garlandia' Is A Trippy, Visionary, Not Quite Sublime Graphic Novel 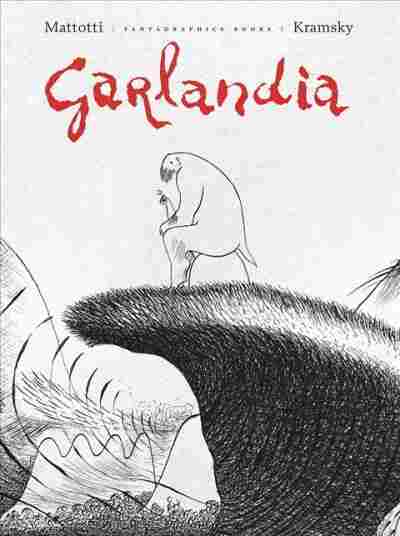 by Lorenzo Mattotti and Jerry Kramsky

Here's a weird fact about American comics: When writers and artists collaborate, the writer's name usually comes first on the book cover. And yet the medium is defined by pictures; highbrow types even call it "sequential art." A poorly drawn comic will almost always fail, no matter how good the story. But powerful illustrations can often sweep up and overwhelm a comic's weak story, resulting in a book that works almost despite itself.

That's what happens in Garlandia, the big new graphic novel from Eisner Award-winning European collaborators Lorenzo Mattotti and Jerry Kramsky. Artist Mattotti's name does come first on this book's title page — along with credit for helping Kramsky write the story — and top billing was never better earned. Garlandia's art is so virtuosic, so gorgeously replete, it almost doesn't matter what the book is about. Its inexorable momentum (which it sustains for nearly 400 pages) is entirely visual. Things like character motivations and plotting merely provide a frail scaffolding for page after page of billowing, ecstatic linework.

Said scaffolding is a sort-of-parable centering on a race of creatures called gars. The gars, bipeds with fleshy bodies and whiskers, live peacefully in a lush fantasy world full of extraordinary flora and fauna: It's Ferdinand Bauer meets Dr. Seuss. But when one gar, a shaman's son named Hippolytes, makes a fatal mistake, the gars' homeland and way of life are thrown into peril. Hippolytes must go on a far-flung quest to set things to rights and reunite with his wife, Cochineal, and their newborn child. Along the way he's helped and hindered by an array of strange beings: a giant snail who sails across an endless sea, a centaur-creature with pointy breasts and gazelle's legs, and an oversized, waddling humanoid. "So many disturbing presences," Hippolytes muses. "Nah," replies the centaur coolly, "they're almost all hallucinations."

Meanwhile, back in Garlandia, the gars fall under the sway of a dangerous prophet. This subplot seems to exist solely in order to gin up some narrative interest; to the extent that it makes any thematic point, that point is trite. Since there's little to set individual gars apart, the crisis that afflicts their society is generic and unmotivated. Hippolytes' quest, too, feels desultory at best. But it doesn't really matter. In the end, the gars and their world merely offer Mattotti the chance to play. He and Kramsky have dreamed up a volcano that spurts out vaporous visions; flying beings with trumpet blossoms for heads; a floating "daemon" with a gnarled face and gaseous tail; a fluffy living island that serves as a creche for Hippolytes' child. The gars' world is frequently beset by typhoon-like gales and floods. A lesser artist would fall short here: It's hard to make wind and water come alive. Mattotti fills huge two-page spreads with nothing but swirling textures, and it's beautiful.

'Garlandia's art is so virtuosic, so gorgeously replete, it almost doesn't matter what the book is about. Its inexorable momentum ... is entirely visual.

Mattotti's style owes a lot to Moebius (to whom he dedicates the book), and the gars look a bit like Freddy the Pig as drawn by Kurt Wiese. But the light elasticity of Mattotti's line, and the irresistible kineticism infusing his drawings, are unique. New, ever-trippier creations pop up every few pages, but Garlandia avoids the self-indulgence that can sometimes make hallucinatory artwork seem cheesy. Mattotti was smart to limit himself to black and white. That decision allows him to focus on form, filling each page to overflowing without swamping the reader. His compositions are almost always perfectly balanced, even as the drawings boil with energetic strokes.

It's probably not fair to discount Kramsky's contribution completely. He bears some credit for Garlandia's wonders. Still, it's a shame that he and Mattotti between them couldn't apply more creativity to their characters' inner worlds. Garlandia is a thing of beauty, make no mistake. But with decent doses of ambiguity and conflict, it could have been sublime.