Accessibility links
'Democracy For Cambodia Is At Stake' As Country Heads Into Elections This Sunday's elections have been declared a sham by rights groups and Cambodia's opposition leaders, who've called for a boycott. For longtime leader Hun Sen, they're about cementing his legacy.

'Democracy For Cambodia Is At Stake' As Country Heads Into Elections

'Democracy For Cambodia Is At Stake' As Country Heads Into Elections 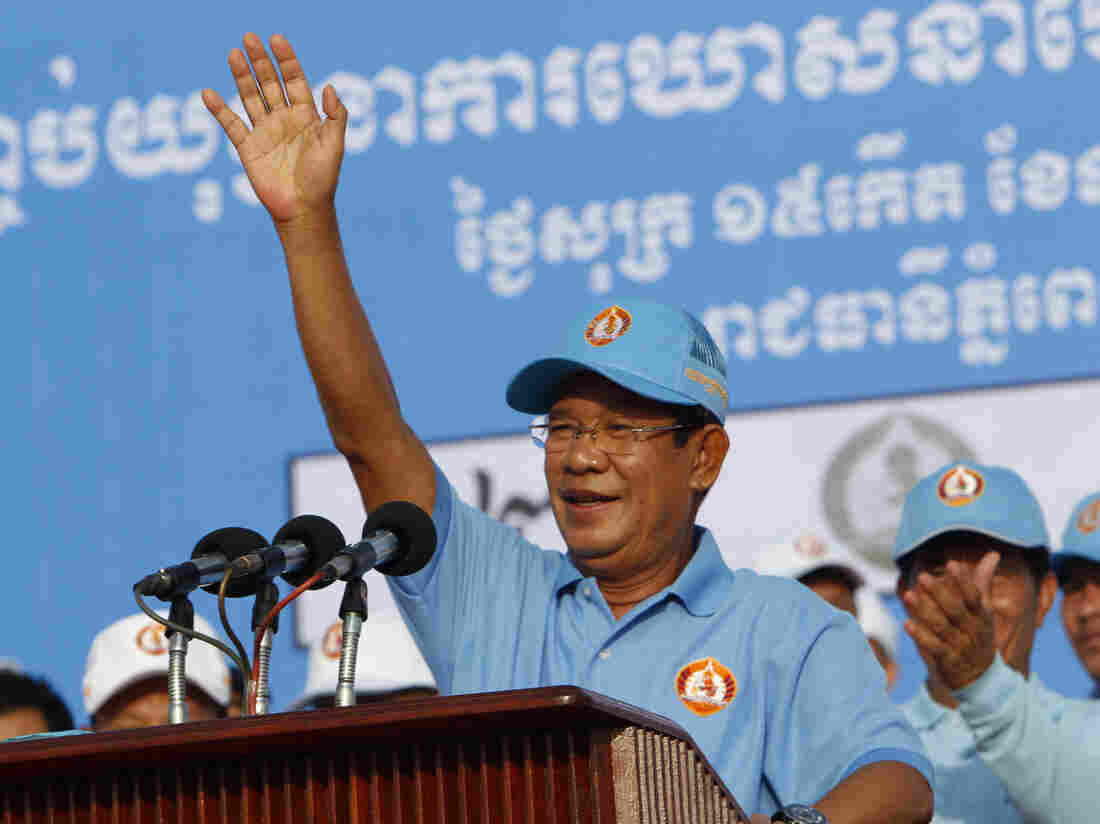 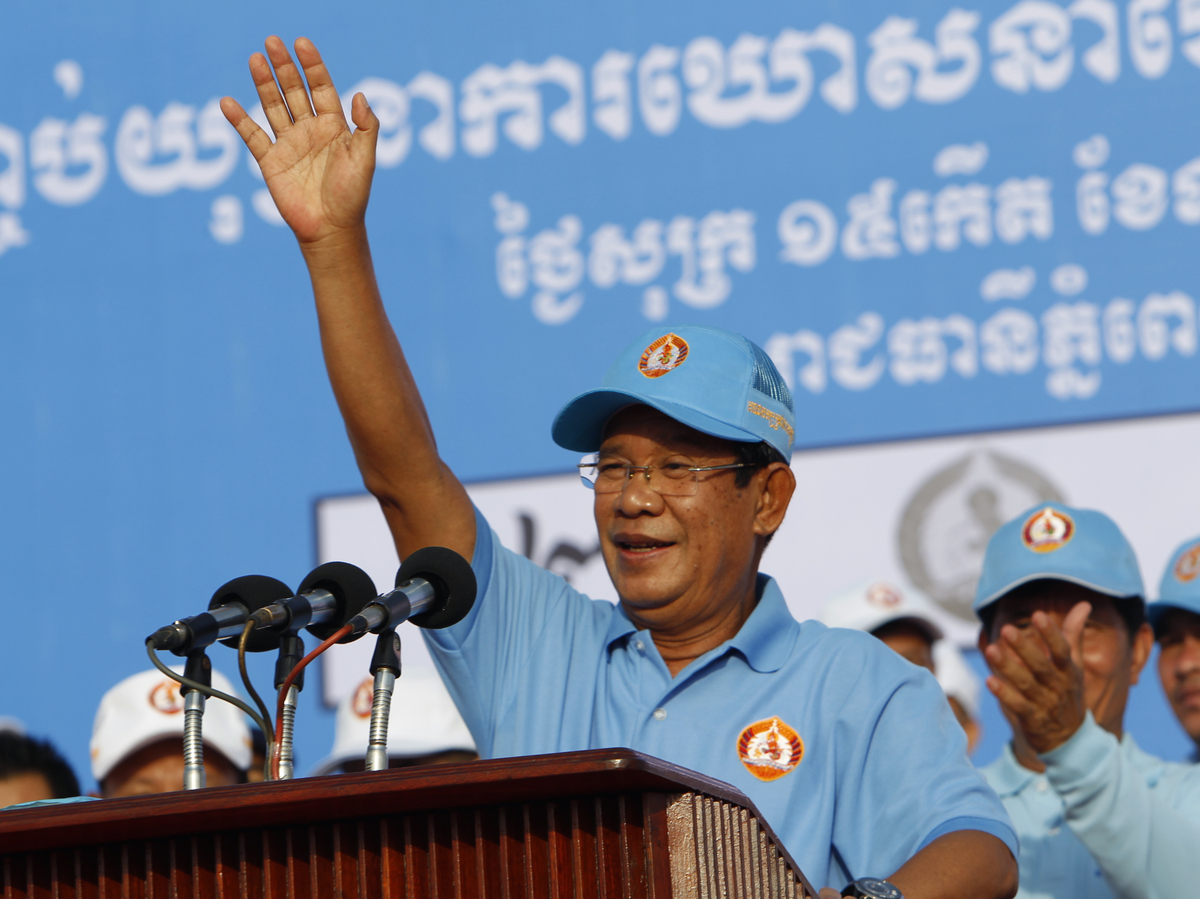 Cambodian Prime Minister Hun Sen waves to supporters in Phnom Penh on Friday. Ahead of Sunday's elections, Hun Sen's ruling party has banned the main opposition party, jailed its leaders and other critics and shut independent media outlets. Opposition politicians in exile are urging a boycott.

Other than the campaign posters plastered across Cambodia's capital Phnom Penh, there's little sign that general elections are coming up this Sunday, July 29. Traffic hums along as usual. And save for the occasional car spouting ruling party propaganda through a bullhorn, there's no canvassing or active campaigning in the streets and scant open talk about the vote.

This is in stark contrast with what happened during last year's election campaign season, when opposition rallies drew crowds across the country. These days, the only political party drawing big crowds is the Cambodian People's Party, the longtime ruling party.

That's because this time, there's no real opposition to the CPP. Its leader, Prime Minister Hun Sen, has been in office for more than 30 years. After significant gains by the Cambodia National Rescue Party (CNRP) in last year's local elections, Hun Sen launched a brutal crackdown on dissidents, the media and rights organizations that he accused of trying to overthrow the government. By the end of 2017, the main opposition party had been dissolved by the Supreme Court.

With only fledging parties standing in Hun Sen's way, Sunday's elections have already been declared a sham by Cambodia's main opposition politicians, rights groups and some members of the international community, who have withdrawn election funding. Human Rights Watch calls the elections "fundamentally flawed" and warns that banning the main opposition makes the "vote meaningless." It also notes that many election observers are staying away because "the electoral process is too problematic." The U.S. House of Representatives passed a measure this week calling for sanctions on the ruling party for undermining democracy and human rights.

"Democracy for Cambodia is at stake," says Mu Sochua, vice president of the CNRP, reached by NPR in Portugal. She has been living in exile since she and several other opposition leaders fled the country in October, after their party's co-founder, Kem Sokha, was arrested for alleged treason. Kem now sits in jail with no timeline for a trial.

From Hun Sen's perspective, voter turnout will be key since the CNRP has called for an election boycott. High turnout would be "cited as proof that the nation has come together to express support" for the ruling party, writes Astrid Norén-Nilsson with the Center for East and South-East Asian Studies at Lund University in Sweden.

Low turnout, she tells NPR in an email, "would be an Achilles heel" that the opposition could use to undermine the ruling party in the future.

Mu and other opposition leaders are banking on the international community not recognizing the election results. But for Hun Sen, this election is primarily about locking in his legacy, Norén-Nilsson says.

"Hun Sen has led Cambodia for more than three decades, making Cambodia rise again from the ashes of the Khmer Rouge-regime ... overseeing two decades of stellar economic growth and making the country reach lower middle-income status," she says. "He wants these achievements to be his political legacy."

A former Khmer Rouge commander, Hun Sen was installed as Cambodia's de facto leader of the Vietnamese-backed government in 1979. He was first elected prime minister in 1985. As he jostled for power with two other strongmen into the 1990s, he became "co-prime minister" in 1993. Hun Sen launched a coup in 1997, deposing the first prime minister. The following year, Cambodians elected him again as sole prime minister on a message they craved: stability, development and economic growth.

"In 1998, he managed to negotiate an end of the Khmer Rouge and bring about peace for the whole country for the first time in decades," Ou Virak, president of the Future Forum, a public policy think tank in Phnom Penh, told NPR in an email.

Hun Sen also followed through on his promise to develop the country. Cambodia's economy — based largely on garment manufacturing and tourism — grew by an average 7.6 percent between 1994 and 2015 and is the world's sixth-fastest growing economy, according to the World Bank. While income inequality has risen, particularly between the ruling elites and the poorest 30 percent, Cambodia's middle class is growing, says Ou. Still, Cambodia remains poor, with a per capita GDP of $1,384 in 2017, one of the lowest in the region.

Over the decades, human rights groups have accused Hun Sen's government of stamping out dissent by way of political violence, unbridled corruption, repression of free speech and almost complete control of the media. His iron-fisted rule, Ou says, has succeeded through a "wide and somewhat successful network of patronage." He also built loyalty in the armed forces and the courts.

Yet he has allowed Cambodians to have some personal freedoms, says Ou, such as permission to study abroad and speak English. While always facing some restrictions, civil society has blossomed throughout the 1990s and 2000s, he says. "The ideals of human rights and democracy have been allowed to be disseminated," Ou says.

Many experts see Hun Sen as moving toward China, which is bringing aid and investment, and away from the West, which criticizes the way he runs his country and accuses him of human rights abuses. Over the years, the Cambodian leader has hammered away with an anti-Western message: that Cambodia has been used as a geopolitical pawn by outside powers. He has plenty of fodder for this argument, including Cambodia's French colonization, the U.S. bombing campaign in the late 1960s and early 1970s, and what he sees as United Nations interference in nation-building.

Cambodia makes for an interesting test case of China's influence, says Joshua Kurlantzick, senior fellow for Southeast Asia at the Council on Foreign Relations. The U.S. has mostly focused on human rights issues in Cambodia, he says. "But the U.S. has to figure out a strategy for a world in which China is much more influential and the U.S.'s power is receding somewhat," says Kurlantzick.

Although repression over the last year has been the most severe Cambodia has seen since the late 1990s, Kurlantzick suggests Hun Sen might let up after the election.

"Historically, Hun Sen's strategy has been to alternate between severe repression and co-opting opposition members, leaders of civil society and anyone who generally opposes him in between periods of repression," he says.

Other experts, like Norén-Nilsson, believe Cambodia is going through a political transformation and that the main point of Sunday's election is for Hun Sen to usher in a "new normal" with fewer democratic freedoms — something unpalatable to many Cambodians.

"I think ordinary Cambodians, almost without exception, want Cambodia to be a democracy ... even though there may not be even a minimal agreement in society about what democracy means," she says.

Mu Sochua says after Sunday, she'll continue the fight on behalf of her opposition party.

"We cannot live in fear, we need to give Cambodia a chance," she says.

Mu points to Malaysia's shock election earlier this year, where the ruling party of 60 years was finally ousted by the opposition.