Accessibility links
Imran Khan: From Swaggering Cricketer To Populist Prime Minister Imran Khan has been a world champion cricketer, a playboy splashed across gossip columns, and the husband of a British heiress. Now, he's poised to be the next prime minister of Pakistan. 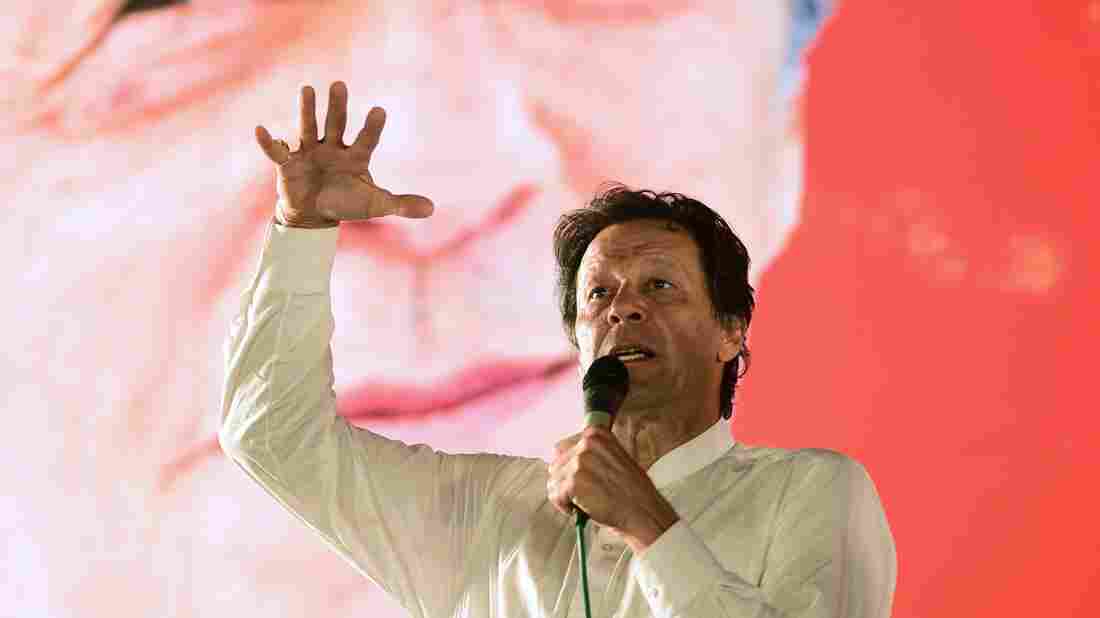 Imran Khan addresses a political campaign rally ahead of the general election in Islamabad on July 21. He's been in the public eye for decades, first as a cricket player, and now is set to become prime minister. Farooq Naeem/AFP/Getty Images hide caption 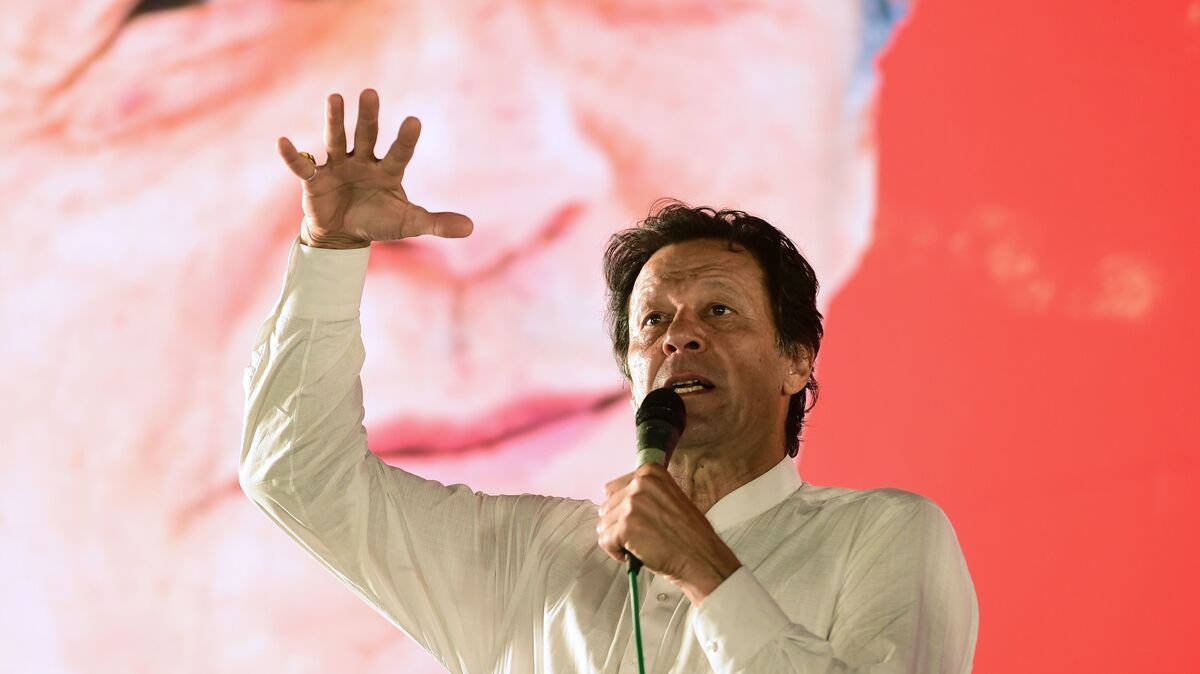 Imran Khan addresses a political campaign rally ahead of the general election in Islamabad on July 21. He's been in the public eye for decades, first as a cricket player, and now is set to become prime minister.

"And the chant has now continued into his rallies," says Omar Waraich, a Pakistani political analyst and former newspaper correspondent.

For his supporters, Khan has come full circle, from the man who led Pakistan to victory in the 1992 Cricket World Cup, to winning Pakistan.

On Friday, Pakistan's election commission said that Khan's party, the Pakistan Movement for Justice, had won the biggest share of seats in the National Assembly, paving the way for Khan to become the country's next prime minister.

He possesses a rare trajectory. A sporting legend who was also a handsome playboy and British celebrity — he married one of Britain's wealthiest socialites — and transformed his public image. He became a philanthropist and took on the mantle of public piety even as he turned to politics.

Now he assumes leadership of one of the world's most populous Muslim countries, facing enormous challenges at home and abroad. Pakistan is a nuclear-armed nation that has hostile relations with neighbors Afghanistan and India. It is mired in debt, faces rising temperatures and diminishing water supplies. Meanwhile, militants continue to wreak havoc in the country's periphery.

OPINION: Imran Khan Has Declared Victory In Pakistan's Election. But The Military Won

The world of Pakistani politics

For some analysts, Khan fits a similar mold as other conservative populists who have enjoyed renewed favor in recent years. In Khan's case, that populism is bent toward Islamism. He has vowed to make Pakistan an Islamic welfare state.

"Imran himself says that one of the people he'd like to emulate is Recep Tayyip Erdogan," says Waraich, referring to Turkey's president, who has increasingly tightened his grip on power. "Even amongst his supporters, there are some who worry he may take that comparison a bit too far."

Even before official results were announced, Khan reached out to Pakistanis, promising them to run the country "as it has never before been run." He vowed to fight corruption and alleviate poverty. On foreign policy, he has called for peace with India; praised China, Pakistan's closest ally; and criticized the United States, arguing that Pakistan has been waging war on behalf of Washington.

"America gives aid to Pakistan to fight America's war," he said in a speech broadcast from his home in a wealthy Islamabad suburb Thursday. "This causes a lot of damage to Pakistan," he said. "We want relations with the U.S. that are mutually beneficial."

It is so far unclear, however, how much control Khan will have over policy toward the U.S., India and Afghanistan, which have long been the purview of the military.

Khan's party ended up with 116 of 272 contested seats in the parliament. Despite the extent of his win, his victory has been marred by allegations that the military and judiciary conspired to curb his main rival's electoral success — and to boost him into the premiership. Nawaz Sharif, Pakistan's former prime minister and leader of the former ruling party, alleges that a slew of corruption cases against him and his family was timed to destroy their political future.

Those cases stem from the release of the Panama Papers in 2016, which detailed how Sharif's children were linked to offshore companies that owned upscale apartments in London.

In the aftermath of those revelations, Khan loudly pushed for the courts to investigate the Sharifs, who offered contradictory explanations for how the apartments were paid. The courts would ultimately oust Sharif as prime minister in 2017. Sharif was also banned from public office, and then, weeks before the election, sentenced to prison for a case surrounding the ownership of the apartments.

In the run up to elections, other leaders from Sharif's party faced criminal charges under anti-terrorism laws. One leader was given a life sentence in a narcotics case. There was also a crackdown on media outlets perceived as sympathetic to Sharif. That prompted a European Union monitoring team to say on Friday that the run-up to Pakistan's elections had "reshaped the political environment ahead of the elections."

The State Department said it "shares concerns about flaws in the pre-voting electoral process," which included "constraints placed on freedoms of expression and association during the campaign period that were at odds with Pakistani authorities' stated goal of a fully fair and transparent election."

The military, which has ruled Pakistan for nearly half its history, has denied any interference, as has the judiciary.

Khan too, dismissed those allegations, saying that corruption is what brought down his rival. Responding to an NPR question at a press conference earlier this month, he said: "How would a Western government react? Would they not put somebody like that behind bars?" he said. "How can there be any sympathy for somebody like that?"

For his critics, it signaled Khan's accommodation with the military, Pakistan's most powerful institution — as long as he could win.

No stranger to the public eye

Khan is from a wealthy family who reside in Pakistan's second-largest city, Lahore. He was educated at the University of Oxford, and spent his years crisscrossing between Pakistan and the United Kingdom, where he became a sought-after celebrity for his cricket skills, easy charm and good looks. He even married a wealthy British socialite, Jemima Goldsmith, who converted to Islam and moved to Pakistan with him — they divorced on good terms in 2004 after nine years of marriage. 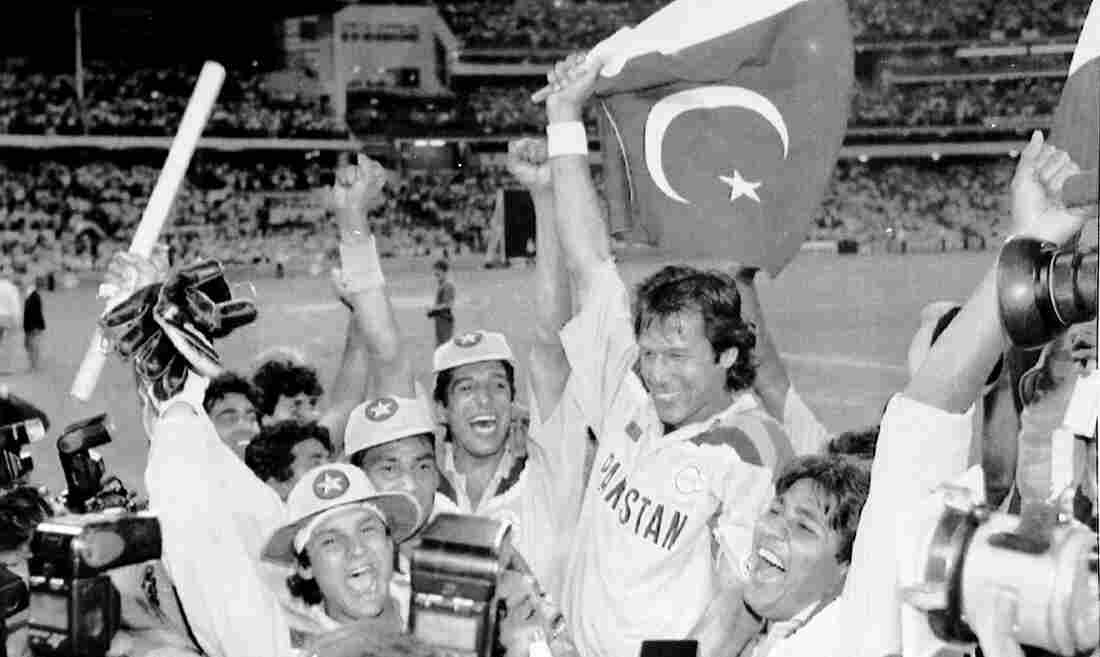 As Pakistan's cricket team captain, Imran Khan is cheered by his teammates after Pakistan defeated England in the World Cup Cricket final, in Melbourne, Australia, in 1992. Steve Holland/AP hide caption 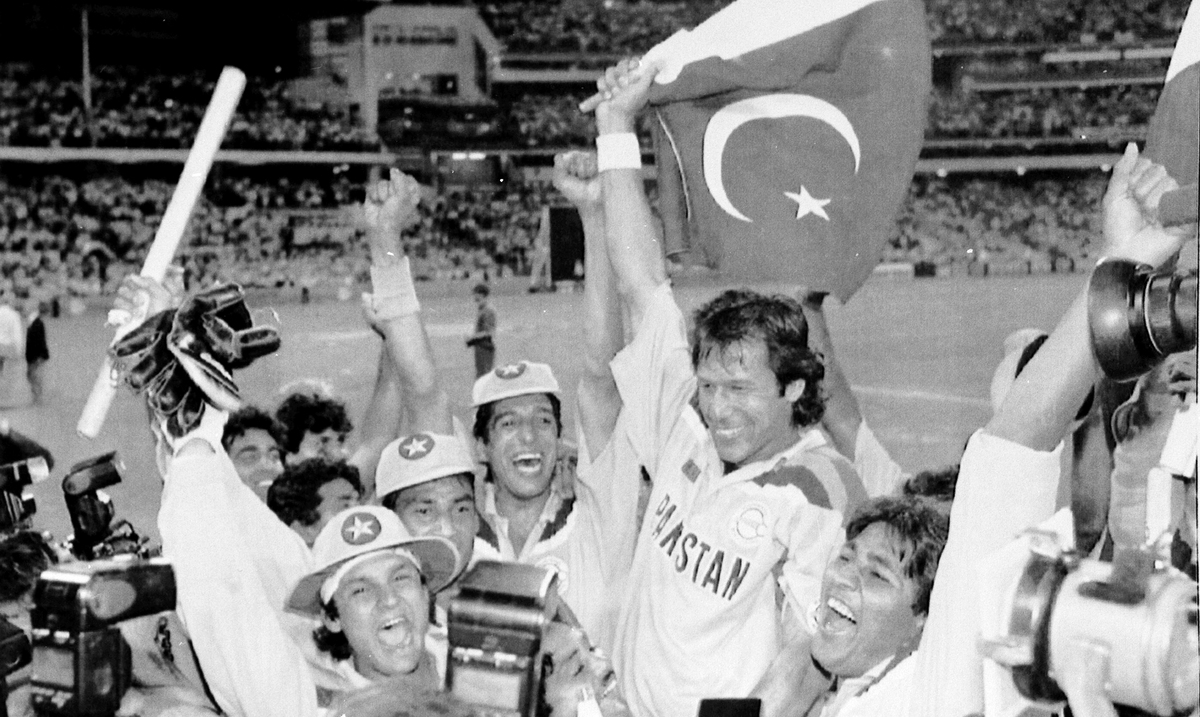 As Pakistan's cricket team captain, Imran Khan is cheered by his teammates after Pakistan defeated England in the World Cup Cricket final, in Melbourne, Australia, in 1992.

Around the time he retired from cricket as a hero in the early 1990s, he began fundraising for a cancer hospital and research center, named after his mother. That effort inspired a generation of Pakistanis to rally around a philanthropic cause, according to Mosharraf Zaidi, an Islamabad-based columnist for Pakistan's The News International and co-host of a political affairs podcast called How to Pakistan.

"I'm part of a generation of Pakistanis who went door to door all around the country to raise money for the Shaukat Khanum Hospital," says Zaidi.

Khan created "self-awareness and civic sense of duty and responsibility," he says. It was the "first time a politician had done something like that in Pakistan."

Slowly, he built up a following as he lashed out against Pakistan's endemic corruption, and gathered "a robust and diverse coalition of people that could win electorally," Zaidi says.

But for years, his party had only ever won one seat — his. Then, in 2013, the party won about 10 percent of the national assembly, according to Zaidi. They became the chief opposition party, attracting socially conservative urban middle class voters.

"We want change and we want him to bring change," says Iftikhar Ahmed, 23, a salesman in a sporting goods shop in Islamabad. "We have already tested the others," Ahmed says. "Imran will improve education, he will stop money laundering, he will bring an end to corruption, he will bring so many reforms."

No stranger to criticism, either

But to Khan's critics, he is a man who craves power, not governance. They cite a damaging sit-in that paralyzed the capital Islamabad during the fall of 2014 after Khan claimed his rivals had rigged the elections to their favor. Meanwhile, as a lawmaker, he was one of the most absent legislators in Pakistan's parliament — only showing up for 4 percent of all days that lawmakers are expected to attend, according to Pakistan's Free and Fair Election Network.

They see him as a disrespectful leader who calls his opponents "donkeys" — leading some to blame his followers for torturing at least one real-life donkey in a frenzy of hatred, according to local media.

They critique his populist promises, which they say are unrealistic and unattainable. Those promises include a swift end to corruption, a promise to build 5 million affordable homes, create 10 million jobs and revitalize tourism.

Among some Pakistani feminists, Khan is viewed with suspicion for saying that Western feminism degraded motherhood. He was also accused of sexual harassment by a former legislator in his party, Ayesha Gulalai, which Khan wouldn't comment on last year.

His second marriage, to Pakistani broadcast journalist Reham Khan, lasted less than a year, ending in divorce in 2015.

Now 65, Khan's party confirmed his third marriage to Bushra Manika earlier this year. He married her in secret. She is called one of his spiritual advisers and she covers her face in public.

Why It's So Hard To Wipe Out Polio In Pakistan

Some view Khan with suspicion for what they say is his coddling up to militants.

They point to his governing coalition providing millions of dollars-worth of funds for a seminary run by a man who is seen as the spiritual father to the Taliban. He also openly supports Pakistan's blasphemy laws, which have been disproportionately used to punish minorities. A radical cleric who founded a militant organization that was close to al-Qaida also announced he was joining Khan's party.

Zaidi says the presumption that Khan has embraced extremists is incorrect.

Khan and his party "are very cynical and opportunistic politicians, and so their embrace of right wingers has often been based on cynical calculations," he says. "What is I think more dangerous," he says, "is the degree of moral agnosticism that he's displayed in his dealings."

Waraich offers a different interpretation. Imran Khan is as contradictory as Pakistan itself, he says.

"Imran is not alone in being someone who can appear liberal at one moment but also holds conservative views — be comfortable in the West and also be comfortable in a village here. That's true of many Pakistanis," Wariach says — but particularly Khan.

A previous Web version of this report said that one of Imran Khan's former wives had accused him of domestic abuse. In fact, she has made that accusation about a different man. Also, Omar Waraich's name was misspelled as Wariach.