Accessibility links
Zimbabwe's Robert Mugabe Says He Won't Support His Old Party The nation's former ruler hinted he would vote for the leader of the opposition movement, telling reporters on Sunday, "I cannot vote for those who have tormented me." 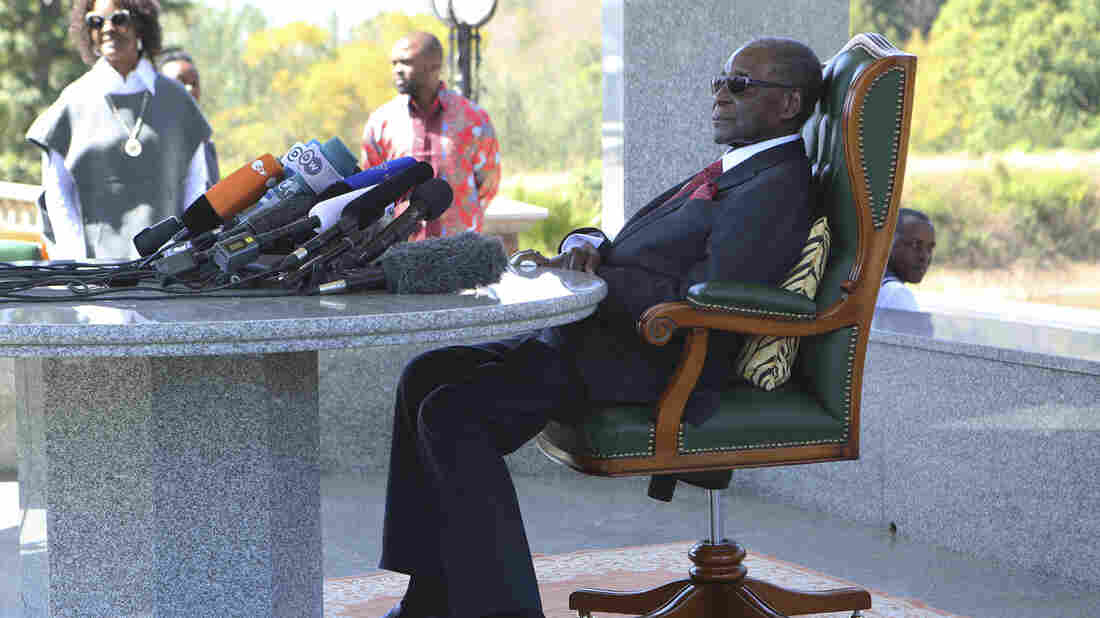 Former Zimbabwean President Robert Mugabe holds a press briefing at his residence on Sunday, on the eve of the country's elections. Tsvangirayi Mukwazhi/AP hide caption 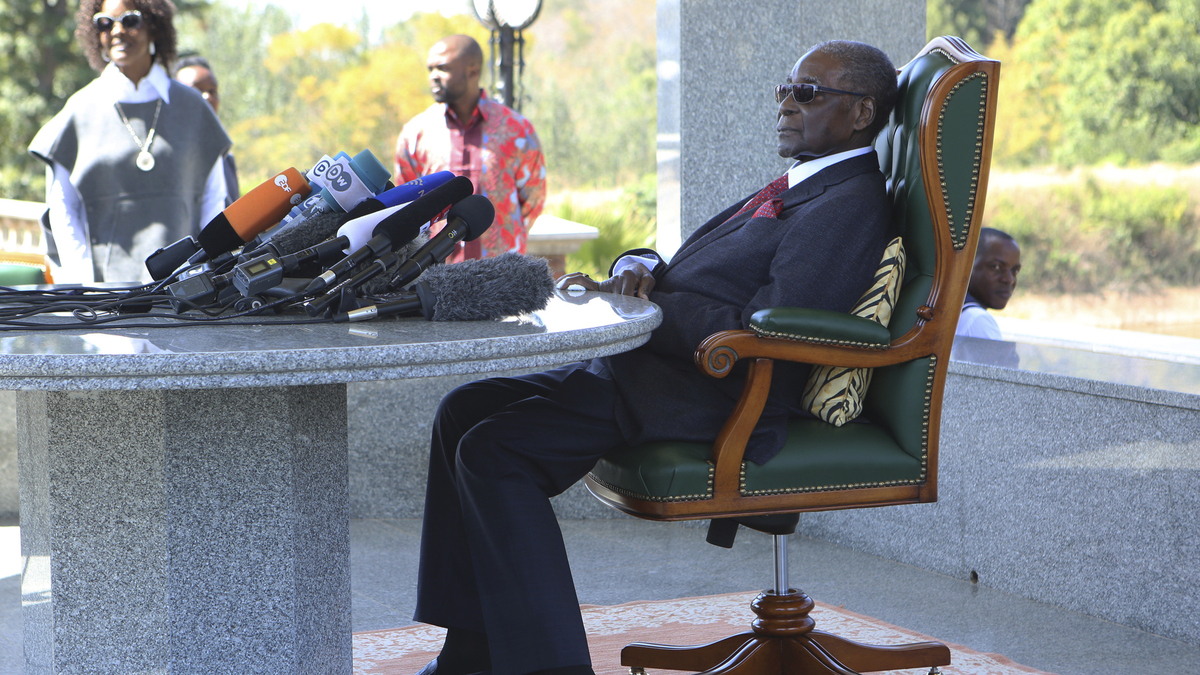 Former Zimbabwean President Robert Mugabe holds a press briefing at his residence on Sunday, on the eve of the country's elections.

Robert Mugabe sat on a green office chair. He wore sunglasses, and he looked small placed at the center of a gazebo in the middle of his huge estate in one of Harare's wealthiest suburbs.

Behind him, there was a pond, and down a sloping hill, his mansion — a sprawling multistory house flanked by granite lions and topped with blue, Chinese-inspired tiles that give it its name — "the Blue Roof."

For 37 years, Mugabe ruled Zimbabwe with an iron fist. But the mansion is where he spends most of his time now, since the military pressured him to resign in November.

But the day before elections — the first time he is not on the ballot since Zimbabwe's independence in 1980 — the notoriously long-winded Mugabe was not about to stay silent.

"I cannot vote for those who have tormented me," he said at a press conference. "I can't."

Mugabe then strongly hinted that he would support Nelson Chamisa, the young lawyer, pastor and leader of the opposition Movement for Democratic Change.

It was a remarkable act of political vengeance.

Zimbabwe's Rickety Trains Get A Boost From Expat Investors Next Door

Last year, Mugabe was ousted by his former vice president and enforcer, Emmerson Mnangagwa. Under Mugabe, Mnangagwa was exiled from government, but he regrouped abroad and persuaded the head of the army, Constantino Chiwenga, to join him in forcing Mugabe out of power.

In November, tanks rolled through the streets of the capital city. Troops surrounded Mugabe's home, and for the first time in decades, the military allowed Zimbabweans to march on the streets en masse to call for Mugabe's resignation. Feeling cornered, Mugabe stepped down. Mnangagwa took over the presidency and Chiwenga became his vice president.

On Sunday, Mugabe spoke for nearly two hours. He was at times bitter, recalcitrant and still eaten up by the betrayal. He said he hoped Monday's election would "bring a better day."

And without a hint of irony, the man who led a regime that squashed dissent violently for decades said he yearned for the days of freedom in Zimbabwe. He said that since he was ousted, his friends and allies no longer feel free to express their support of him.

Despite his ouster, Mugabe remains a powerful figure in Zimbabwe. He still has a base. Mnangagwa blamed Mugabe loyalists for a grenade attack at one of his rallies earlier this month. So his speech was being carefully monitored, and officials in Mugabe's former party, Zanu-PF, responded swiftly.

Nick Mangwana, who is part of the Zanu-PF communications team, wrote on Twitter that the party had been made "aware of the rumblings of a retired old man."

"He is a pensioner and we will continue to respect him in that regard as cultured Africans regardless of the fact he no longer merits it," he wrote. "He has 1 Vote like all of us and his vote choice is respected."

Later in the evening, Mnangagwa tried to turn the tables. He recorded a video message, saying Mugabe's statement made it clear that he was now part of an alliance with the opposition.

"The choice is clear, you either vote for Mugabe under the guise of Chamisa or you vote for a new Zimbabwe under my leadership and Zanu-PF," he said.

Mugabe, for his part, defended his record. He implied that he had always won his elections fair and square and that he had remained in power without the help of the military. Over the years, however, human rights groups have documented systemic voter intimidation and rigging. After the 2008 elections, for example, tens of thousands of people were displaced as the government unleashed violence against MDC supporters.

"Let's pray that tomorrow brings us good news," he said. "And I believe the good news to everyone is we get our freedom back, that we get democracy back."

The most credible poll has Mnangagwa and Chamisa in a dead heat.