Accessibility links
The 200 Greatest Songs By 21st Century Women+ (160-141) This list tackles history in the making, celebrating women and non-binary musicians whose songs are redefining genres and attitudes and changing our sense of what popular music can be in this century. 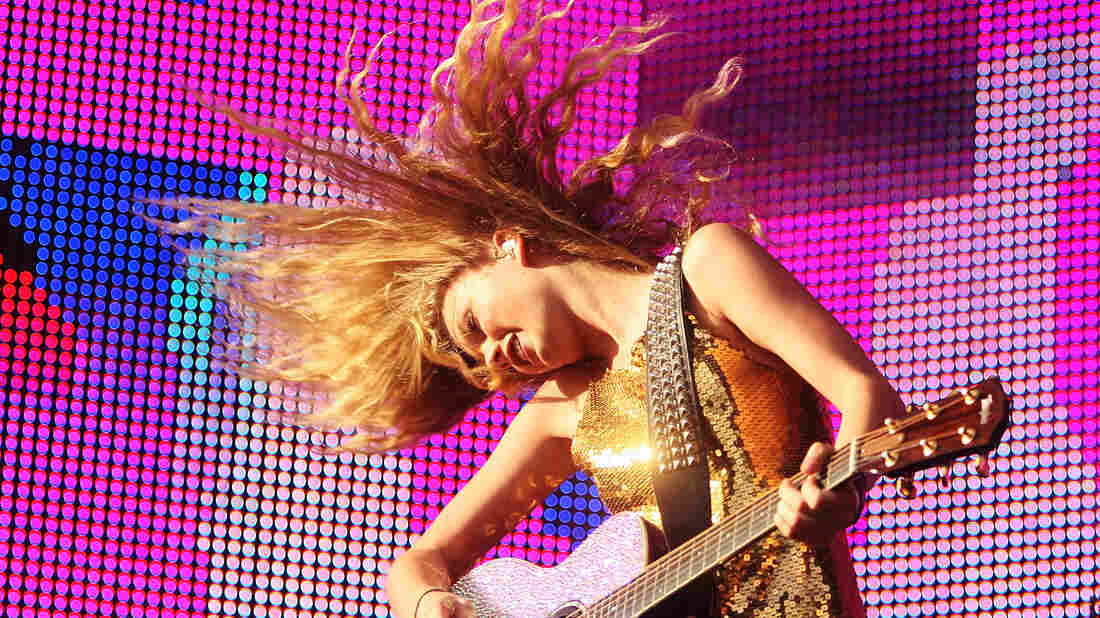 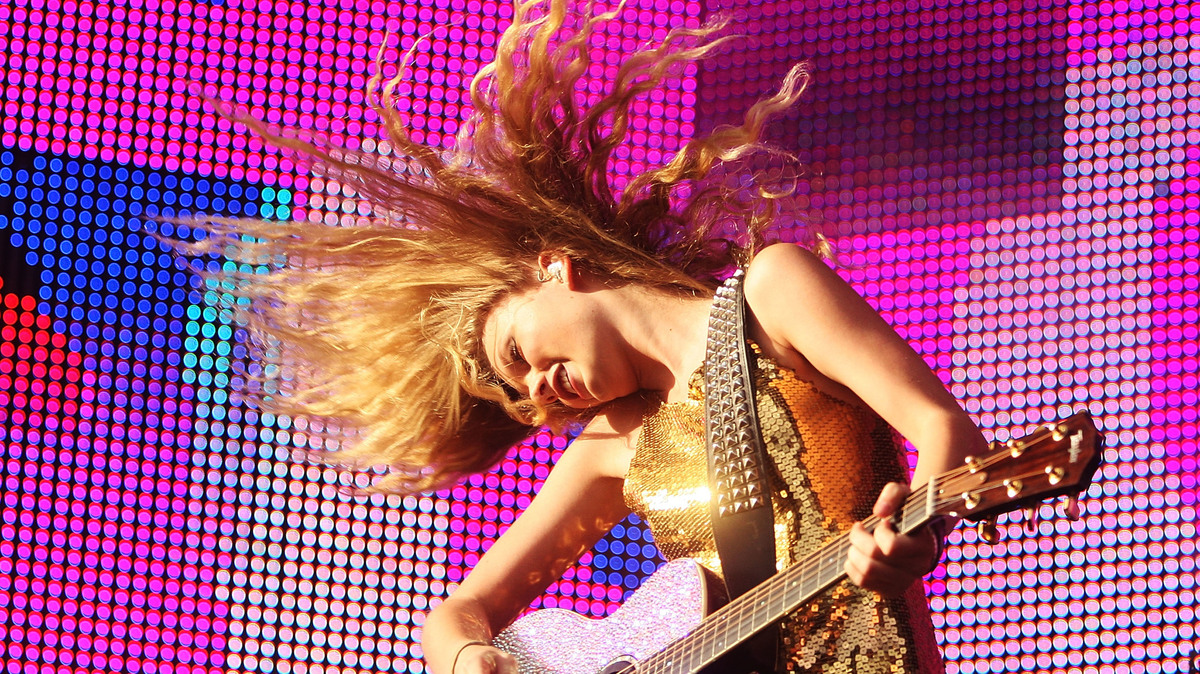 Taylor Swift on stage in Sydney, Australia in March 2009.

Mandolin, fiddle and untimely death: these things sure don't sound like the makings of a crossover hit. But The Band Perry, fronted by Kimberly Perry and her brothers Neil and Reid, turned a song about our harshest realities into pop country gold, anchoring the strings on the ledge between mournful and hopeful and offering an uncannily infectious chorus within a song lineage not exactly known for its hooks. And it's not just catchy, either: with lines like "the sharp knife of a short life," it's cutting, too. —Marissa R. Moss

"A woman's husband appears at her door after an absence of 20 years, suffering from brain damage..." That's the premise behind Sarah Kirkland Snider's Penelope with lyrics by playwright Ellen McLaughlin and sung by Shara Worden (My Brightest Diamond). The gorgeous, haunting song cycle updates Homer's Odyssey from the perspective of its female characters. Snider has been taken to task for writing music that is too vulnerable and too expressive. In "The Lotus Eaters," she answers her critics powerfully with restless music that overflows from an intoxicating desire to forget. —Lara Pellegrinelli

Choosing just one of Mary Gauthier's songs to highlight is no easy feat, as she's already something of a living legend among songwriters. The title track off her 2005 debut album is a daring feat of compassion, using the struggles of Gauthier's immediate family as beautifully rendered lenses through which our broader human weaknesses can be viewed with love and empathy. The song has also had a second life in the wake of the 2016 presidential election, with its focus on outreach and acceptance serving as a welcome antidote to our toxic political climate. —Brittney McKenna

Jazz drummer Terri Lyne Carrington won a Grammy Award for The Mosaic Project, which features a high-caliber all-female lineup. Carrington composed five of the 14 tracks on the album, including "Mosaic Triad," a song featuring complex rhythms and intersecting melodies. The song showcases Carrington's phenomenal expertise and versatility as a drummer and composer, as well as her ability to lead and accentuate the talent she surrounds herself with. —Amy Miller (KXT)

"Sprained Ankle" is, like many of Julien Baker's songs, relatively simple: It rests mostly on a harmonic, looped guitar riff and Baker's unflinching honesty. Woman songwriters who prefer these kinds of straightforward arrangements and from-the-gut lyrics are often labeled "raw" or "fragile." But Baker's gentle touch leaves no room for infantilizing descriptors or "vulnerability-as-strength" clichés, instead evoking an entire world — of suffering and healing, eagerness and fear, loneliness and companionship, distance and intimacy — in its search for a more human truth. —Marissa Lorusso

The fact that this band consists of three women is probably the least interesting fact about Mortals. In extreme metal, what matters most is the technical proficiency, wisdom, respect and dedication to the underground, and the trio has it in spades. "View from a Tower" is Mortals at their best: Vocalist/bassist Lesley Wolf's disembodied vocals, Caryn Havlik's precision drumming and Elizabeth Cline's riffage make this 2014 single a memorable one. —Laina Dawes

Few recordings sound like the present quite like this: Herndon's glitchy banger, built with fragments of her voice plus the contemporary intimate sounds of YouTube and Skype browsing. First released in 2014, "Chorus" previewed what was to come with her innovative 2015 LP, Platform. Herndon criticizes and humanizes our increasingly digital existence in a rare way that's both accessible and intellectual — joining the all-at-once aesthetic of our daily lives with the power of hooks to make subversive experimental pop symphonies. —Liz Pelly

Lily Allen was always a rebel in a polka dot dress. You could see it in her early years when she would get thrown out of schools (plural) for chain-smoking and fighting but would turn around to bring an auditorium to tears with her beautiful rendition of a Disney song. And you could hear that duality of life experience and musical presence in her 2006 debut single "Smile," when she dressed up some Cockney-twanged mischief in sugar-coated vocals and ska-pop-tinged melodies. It's cheeky, bawdy, experimental and ear-catching. With a mix of spoken word disses and Snow White high notes, "Smile" proved then (and forevermore) that Lily Allen is the pop princess that you do not want to mess with. —Joni Deutsch (WFAE)

"House Music Is Controllable Desire You Can Own" (2008) 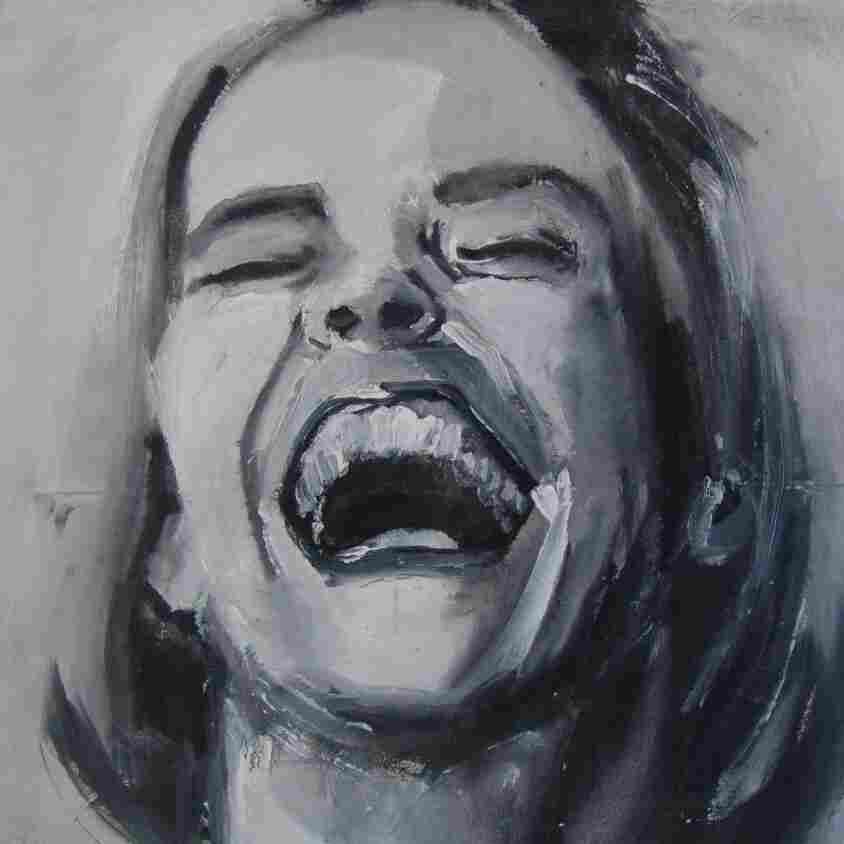 Queer philosophizer, deep house revisionist, and general polymathic multi-hyphenate Terre Thaemlitz has spent an entire career posing critical correctives to the failures of house music's canon, aiming to unspool the ideas that've guided the cozy, utopian ideas largely surrounding dance music and recalibrate them in the realities of the LGBT hardship that shaped and defined its course. The centerpiece of Thaemlitz's house classic-wouldn't-even-begin-to-describe-it, Midtown 120 Blues, is DJ Sprinkles par excellence: pearlescent, hypnotic, and spiked with lines of inquiry. —Mina Tavakoli

With her 2009 debut album as Fever Ray, Karin Dreijer eked out danker depths of isolation electronica than most artists of similar ilk would dare to imagine. "Seven" establishes Dreijer's creative voice as one that can be both primordial and pretty, cutting yet kind, and utterly seductive for those listeners bold enough to slither down into the dance cave along with her. —Talia Schlanger (World Cafe)

Neo-Sufi musician Arooj Aftab grew up in Pakistan, where opportunities for women musicians are scarce. "We're very conservative, culturally, and our society has assigned roles to women. Women sing, but they can't play guitar or compose on their own," she has said. "A girl with a guitar is a big deal here." Despite this, Aftab mastered singing and playing the tabla drum, then the guitar. At 19, she moved to Boston to attend the Berklee College of Music, where she incorporated a kaleidoscope of new influences into her music, from Crosby, Stills & Nash to Farida Khanum to Jill Scott. "Lullaby," from her debut album Bird Under Water, calls forth the poetry and euphoria of Pakistani Qawwali and Sufi styles, swirled into modern, interpretive riffs from rock, hip-hop, classical and jazz. —Michele Myers (KEXP)

Sky Ferreira, "Everything Is Embarassing" (2012)

Sky Ferreira's "Everything Is Embarrassing" marked her first foray into pop stardom — by that point, the 20-year-old had a successful career as a model and actress, but this downtrodden dance-pop single produced by 1980s revisionists Dev Hynes and Ariel Rechtshaid ushered in a new musical moment. Ferreira's vocals are impossibly cool, fully embracing the humiliation of anxiety and unfulfilled romances. It's a song that submits to mundane mortifications, the sound of sweet suffering. —Maria Sherman

Emboldened by Rilo Kiley's evolution from alternative country to More Adventurous indie rock, Jenny Lewis' performance on "Portions for Foxes" is forcefully carefree and infectiously fun. "C'mere!" she growls halfway through the song, a moment that may as well mark the beginning of her solo career. Conor Oberst came running and invited her to record an album for his new label, which resulted in 2006's Rabbit Fur Coat. Rilo Kiley released its final album in 2007, and Lewis went on to collaborate with the likes of Elvis Costello, Ryan Adams and Beck over the span of two more solo albums and two side projects, Jenny & Johnny and Nice as F***. —Kristen Kurtis (WXPN)

Few songs give you goosebumps with every listen. With nothing but her voice and a vocoder, Imogen Heap has created something emotive, dynamic and minimalistic with "Hide and Seek." A pioneer of electronic pop, Heap manages to bend, twist, flip, grow and shrink notes with her vocal dexterity here, and the result is the stand-out gem of her illustrious career. —Lindsay Kimball (The Current)

Of the dozens of heart-forward dance songs Metric has cranked out over the past two decades — see "Gimme Sympathy," "Stadium Love" — few cut to the quick of Emily Haines' anxious yet optimistic outlook on life quite like "Help I'm Alive." An ode to learning how to exist in fight-or-flight mode, the song captures Haines and her band in all their pulse-quickening pop glory. —Andrea Swensson (The Current)

Crisp and impactful as the stories they invoke, Jamila Woods' lyrics pay tribute to Black female revolutionaries from the underground railroad to Black Lives Matter. She laments abuse, scientific racism, #oscarssowhite and institutional neglect ("We go missing by the hundreds / Ain't nobody checkin' for us"). Yet "Blk Girl Soldier" is upbeat and energetic. It's tinged with sadness about injustices committed "last century, last week," but infused with the beautiful power of those who fought and keep fighting. —Sheli DeLaney (KTOO)

Mala Rodríguez, one of Spain's fiercest jarcor rappers, has always bucked against the norm. Before she was ubiquitously known as "La Mala" — a nickname from her aunt, due to her penchant for mischief — she spray-painted her moniker all across Seville. But her name was on everyone's lips when she released her uncompromising song "Yo Marco El Minuto" from her first album, 2000's Lujo Ibérico. Over a downtempo beat, she spits line after line of all-knowing, cheeky revelations: "Mi madre me educó hasta donde pudo / Y luego me dio su escudo / No voy a salvar el mundo / Salvaré mi culo" (My mother educated me up to where she could / Then she gave me her shield / I'm not going to save the world / I'm going to save my ass). Brilliant and sure, "Yo Marco El Minuto" was at once an early introduction to her unmistakable flow and also a foreshadowing of the greatness to come. —Paula Mejia

Cooly G got her start wrapping exhilarating drum patterns around U.K. funky's party spirit in the late 2000s. Her 2012 debut album, Playin Me, revealed a new side to the South London producer and singer, one that foreshadowed many of today's club-inspired, slow-jam records. With its extended intro, diaristic lyrics and towering bass, the LP stand-out "He Said I Said" is a master class in rendering the heart-in-throat tension implicit in physical attraction. —Ruth Saxelby

Taylor Swift became officially unavoidable with 2008's Fearless. "You Belong With Me," responsible for one ill-fated VMAs acceptance speech, is a trope-heavy teenage underdog romance tale — told with such sincerity as to feel suddenly original. That's Swift's brilliance: the Zeitgeist as personal, the personal as Zeitgeist. There's a banjo part thrown in, but "You Belong With Me" is 100 percent perfect pop, forecasting Swift's unprecedented crossover to where she and her airtight songwriting always belonged: the chart-topping mainstream. —Isabel Zacharias (KMHD)