Accessibility links
The 200 Greatest Songs By 21st Century Women+ (180-161) This list tackles history in the making, celebrating women and non-binary musicians whose songs are redefining genres and attitudes and changing our sense of what popular music can be in this century. 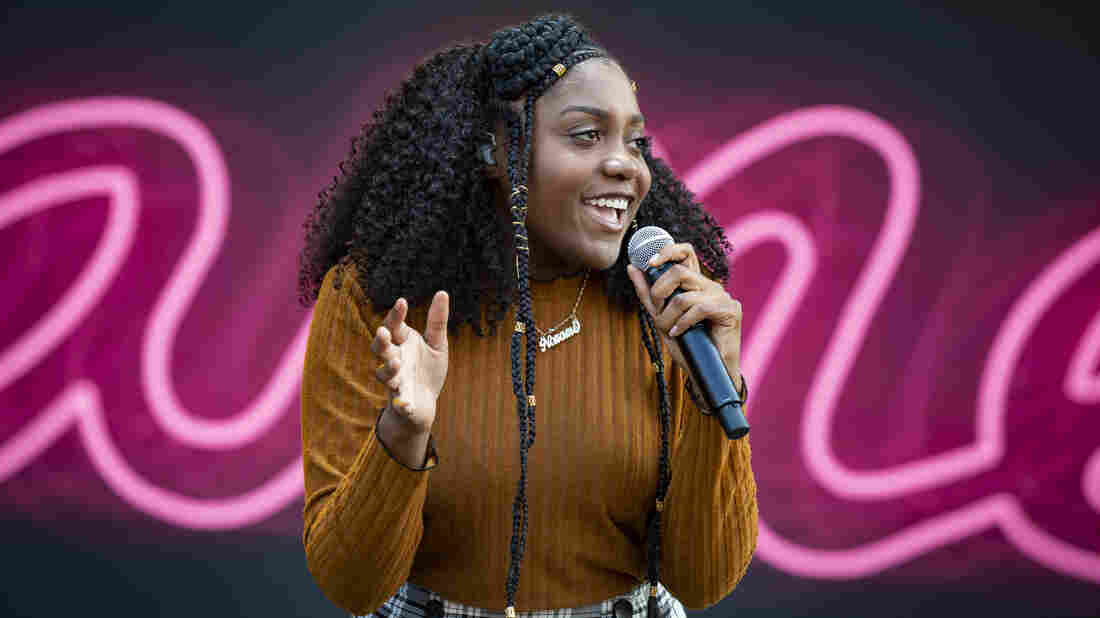 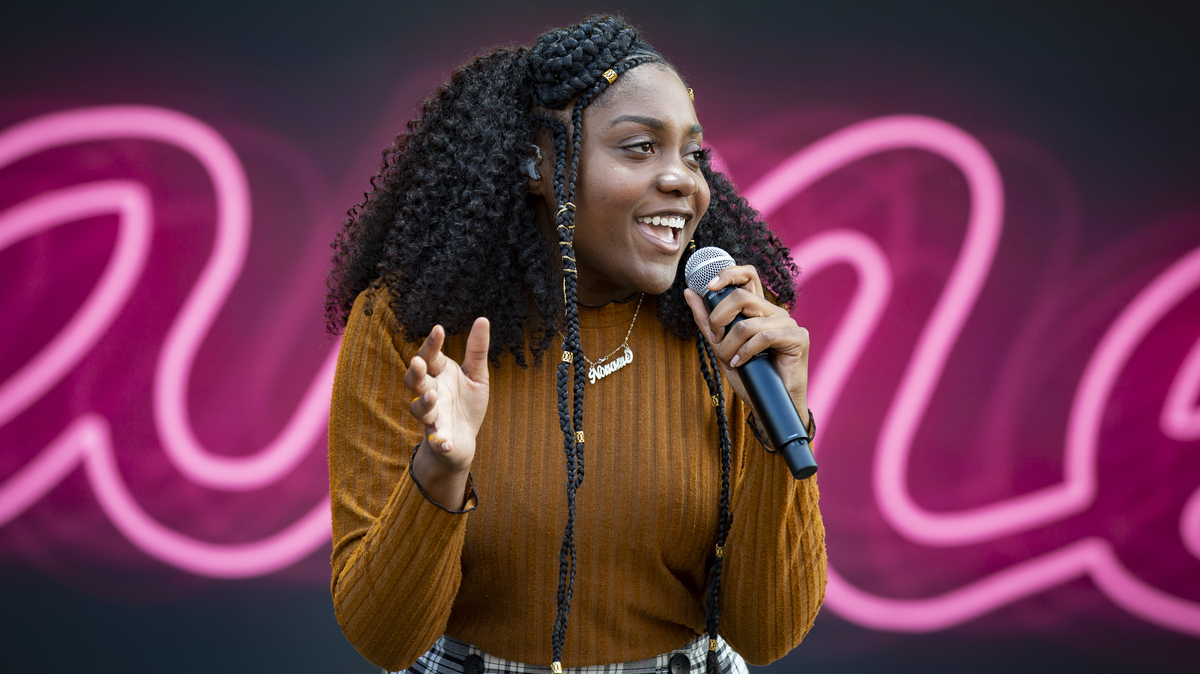 Noname performs at RBC Bluesfest at LeBreton Flats in Ottawa, Canada in July 2018.

This list is part of Turning the Tables, an ongoing project from NPR Music dedicated to recasting the popular music canon in more inclusive – and accurate – ways. This year, our list, selected by a panel of more than 70 women and non-binary writers, tackles history in the making, celebrating artists whose work is changing this century's sense of what popular music can be. The songs are by artists whose major musical contributions came after Jan. 1, 2000, and have shifted attitudes, defied categories and pushed sound in new directions since then.

Spoiler alert: "Love Song," Sara Bareilles' 2007 breakthrough single, was never about a person. Rather, "Love Song" was simply Bareilles' poppy response to a label (not to mention the music industry at large) that kept asking for a radio-friendly love song to kick off her music career. Frustrated by the creative confinement, Bareilles put pen to paper (and soulful voice to cheerful ivory keys) to create her own kind of "Love Song," one where she reminds the naysayers to let her write what she wants, sing what she wants and be who she wants. Spoiler alert (again): Bareilles' heart-on-her-sleeve song won over the label and the radio charts. —Joni Deutsch (WFAE)

Laura Mvula's work is a genre-defying tribute to her musical upbringing – a childhood spent singing gospel at church, listening to Miles Davis with her father and, later, classically training at the Birmingham Conservatoire. In "Father Father," Mvula's normally lush sound is stripped to a single piano. Her quietly powerful vocals deliver a devastating plea to an estranged father: "Father, father, let me love you." The Nina Simone crackle in Mvula's voice lends the song a timeless quality, but her pain feels fresh. —Lauren Migaki

In an album filled with musings on love and mourning, "Diddy Bop" filters in like summer light: Happy memories of childhood in Chicago layer over the socioeconomic realities the city has faced. The song rings relevant to the juxtaposition in black people's lives in many places — the kind of joy that bubbles over with the sun and sweat and somehow breaks through the grief. It's Noname's ability to collage these moments that makes "Diddy Bop" – and her debut album — so stunning. —Sydnee Monday

On this lush electro-pop track, producer and vocalist Shannon Funchess' rich voice, not unlike Grace Jones' with more vibrato, stands out against a bed of warm, pulsing analog synths. Light Asylum's plangent ode to love and loss propelled the Brooklyn duo out of the underground and filled discerning dancefloors everywhere for a moment in the early years of this decade. —Jes Skolnik

Named the Mead Composer-in-Residence with the Chicago Symphony Orchestra for its next two seasons, Missy Mazzoli is arguably the most prominent and critically acclaimed female composer under 40. She belongs to a generation fostered by New Amsterdam Records, who have unapologetically allowed pop influences to shine through in their "serious music." Mazzoli takes that impulse even further, writing and playing keyboards with her chamber-rock quintet Victoire. Their "Cathedral City" laces technicolor dreamscapes through its fluttering heartbeat. —Lara Pellegrinelli

The three sisters of A-WA (that's "AY-wah," or "yeah" in Arabic) are all about multifaceted identity. They mesh a Yemenite Jewish song — culled from a tradition by, for and about women, and passed down through many generations — with EDM and hip-hop. Talk about intersectional: these are Jewish women, singing in their native Arabic, in bracing, close three-part harmony. And they pair cheeky sonics (plus a delightful, visually dazzling video) with lyrics of untethered romantic longing. —Anastasia Tsioulcas

The title track of Abigail Washburn's second solo album reins in her expansive vocal range on a near-monotone melody. With the galloping pace of her clawhammer banjo and the tugging fiddle of Rayna Gellert, the song is a declaration of how progressive one can be within deeply traditional music without losing sight of its roots. It cemented Washburn's status in the roots realm and yanked us into the magical world of this haunting album. —Kim Ruehl

Against the backdrop of a simple, haunting piano, Jhené Aiko's angelic voice on "The Worst" seeps in like the sweetest of poisons. She grapples with herself in real time over choosing a lover ill-suited for her. And as the song progresses, she turns agitation into venomous aggression. "Don't take this personal / But you ain't s**** / And you weren't special 'til I made you so," she seethes in the second verse. Aiko exhibits the same coquettish charm as '90s predecessors Aaliyah and Brandy, but what sets "The Worst" and Aiko apart is the level of savagery delivered in such a sweet package. —Sidney Madden

Juana Molina's musical world is one of constant flux: The Argentinian songwriter's verses are defiant of traditional time signatures and narrative arcs, and invite expansion by gazing within. The swerves of the enthralling "Eras," from her 2013 album Wed 21, perhaps most aptly capture why Molina is one of the most imaginative and unpredictable artists around. What begins as steady percussion soon morphs into an asymmetrical hum of electronics mingling ominously with folk strums. It's grounded by Molina's greatest talent: spectral, rhythmic vocals with layered lyrics. In this case, she aptly embodies the contradictions of love as she tries to forget someone ("Eras, todo / Nada me hará feliz") and also implores them to "come quickly."—Paula Mejia

By 2011, few harbored analogous ambitions to Kuwaiti bass producer Fatima Al Qadiri: a strange, new, intoxicating presence across transatlantic club scenes who wrote manifestos for her work like museum placards and treated the dancefloor with the deference of a gallerist. "D-Medley" marked her ascent to queenhood in her distinct and arch sonic practice, spurning countless disciples and making freaky theory-based dance music into art itself. —Mina Tavakoli

Let's play a game. I'll say two words, you fill in the rest. Ready? "My milkshake..." You can't resist, can you? "My milkshake brings all the boys to the yard..." It's a total earworm, but the kind that, even 15 years after it first hit the airwaves, still sounds ineffably cool. On "Milkshake," Kelis is sexy, she's confident, she whispers so you'll lean in closer, then tells you the truth. Her milkshake — the things that make Kelis special — brings us all to the yard. Watch if you're smart. —Sarah Handel

While Brandy Clark's work both as a solo artist and as a pen-for-hire for country mainstays like Miranda Lambert and Kacey Musgraves has already had a considerable impact on country music, she's also established herself as the kind of songwriter whose influence will only deepen with time. To boot, the heart-wrenching ballad "Hold My Hand" off Clark's 2013 solo debut 12 Stories shows Clark to be as talented a singer as she is a songwriter. —Brittney McKenna

The Confederate anthem "Dixie" and the anti-lynching ballad "Strange Fruit" couldn't be less likely bedfellows for a musical arrangement. As imagined by René Marie, a former Jehovah's Witness who began singing professionally at the age of 41, the combination is tense with the contradictions of what it means to be black and from the South. Jazz and protest singing effectively parted ways after the Civil Rights era, but Marie carries forward this tradition. —Lara Pellegrinelli

Daymé Arocena, the brilliant Afro-Cuban composer and jazz singer, possesses an extraordinary gift for world-building. That's nowhere more apparent than in "Mambo Na' Má," the single from her 2017 album Cubafonía, which joyously probes the psychic and sonic connection between '50s mambo traditions and the brass sounds of New Orleans' second line. Arocena flawlessly scats over the melange of horns, electronics and mambo and clave rhythms to create both an homage and a forward-thinking future sound — and a star-making one, at that. —Paula Mejia

Aoife O'Donovan, Sarah Jarosz, and Sara Watkins joining forces as I'm With Her was a revelation in roots music circles. Not only do their vocal and instrumental talents blend together beautifully, but their joy in performing collectively is palpable. On "I-89," a tale of self-possession that bristles with bravada, O'Donovan takes the lead with Jarosz and Watkins layering their voices above and beside hers. A gem in its own right, the real potency of "I-89" lies in how it signals what is yet to come from the group. —Kelly McCartney

English-language audiences now know Amara as a cast member on Love & Hip-Hop: Miami, where she has been saddled with the unfortunate task of explaining Afro-Latinidad to ignorant people. But to Dominican and Spanish-speaking audiences, her breakout was 2013's relentlessly ebullient, cheerleader-invoking single "Poron Pom Pom," which celebrates and revels in her own beauty and pep as an Afro-Dominicana. It was not only a feel good hit; it would also mark Amara's continued efforts to combat colorism within and outside of Latinidad. —Julianne Escobedo Shepherd

After decades spent largely as the music of society's outcasts, doom became a dominant strain of 21st-century metal. Richmond, Va. five-piece Windhand is among the genre's reigning bands in part because frontwoman Dorthia Cottrell's voice embodies all the rich, velvety and earthy qualities of a perfectly overdriven amp. The careening, psychedelic "Orchard" opens Windhand's breakthrough album, Soma, with an enveloping wave of sound — and things have only gotten more beautiful and devastating from here. —Jamie Ludwig

Pato takes the indigenous Celtic music of her native region of Galicia, Spain — think mossy green hills and the cold North Atlantic, not languid landscapes brushing against Mediterranean waters — and just wails on her gaita bagpipe. On this tune (written by Victor Prieto and Emilio Sollaher), she pushes an exuberant dance tune through the prism of jazz. —Anastasia Tsioulcas

After "Call Me Maybe" swept the nation as a meme-able, lip-syncable phenomenon, Carly Rae Jepsen kicked off her follow-up album, Emotion, with a saxophone riff as catchy as any hook from the past half-century. "Run Away With Me" shivers with the promise of reckless romance, stirring up the image of a couple speeding into the sunset; it also cascades with a joy and exuberance unparalleled by any of Jepsen's contemporaries. —Sasha Geffen