Accessibility links
The 200 Greatest Songs By 21st Century Women+ (140-121) This list tackles history in the making, celebrating women and non-binary musicians whose songs are redefining genres and attitudes and changing our sense of what popular music can be in this century. 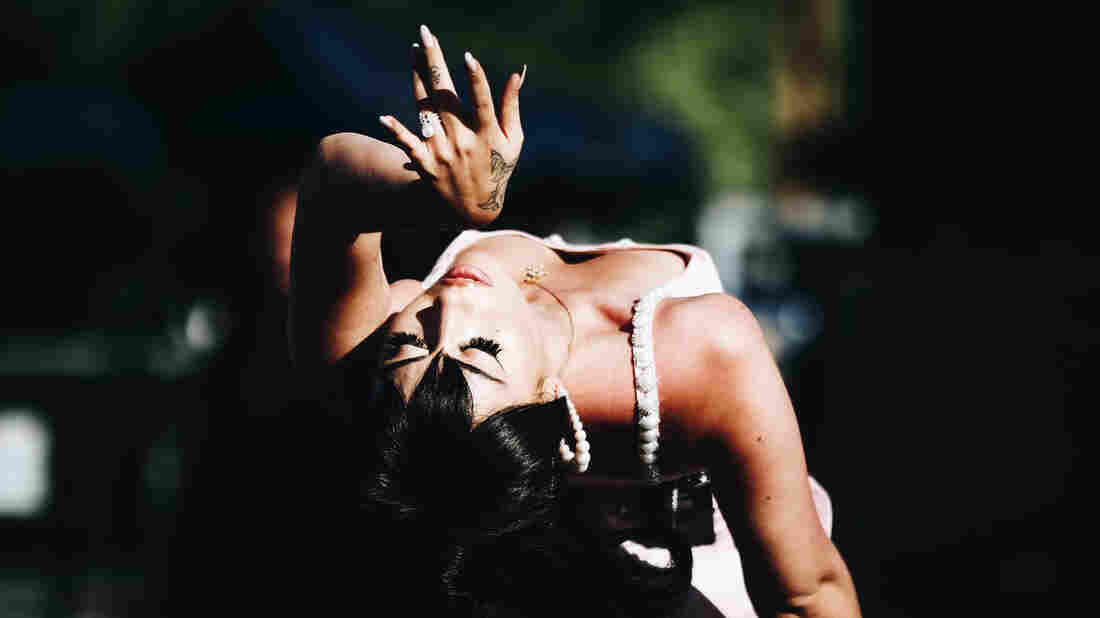 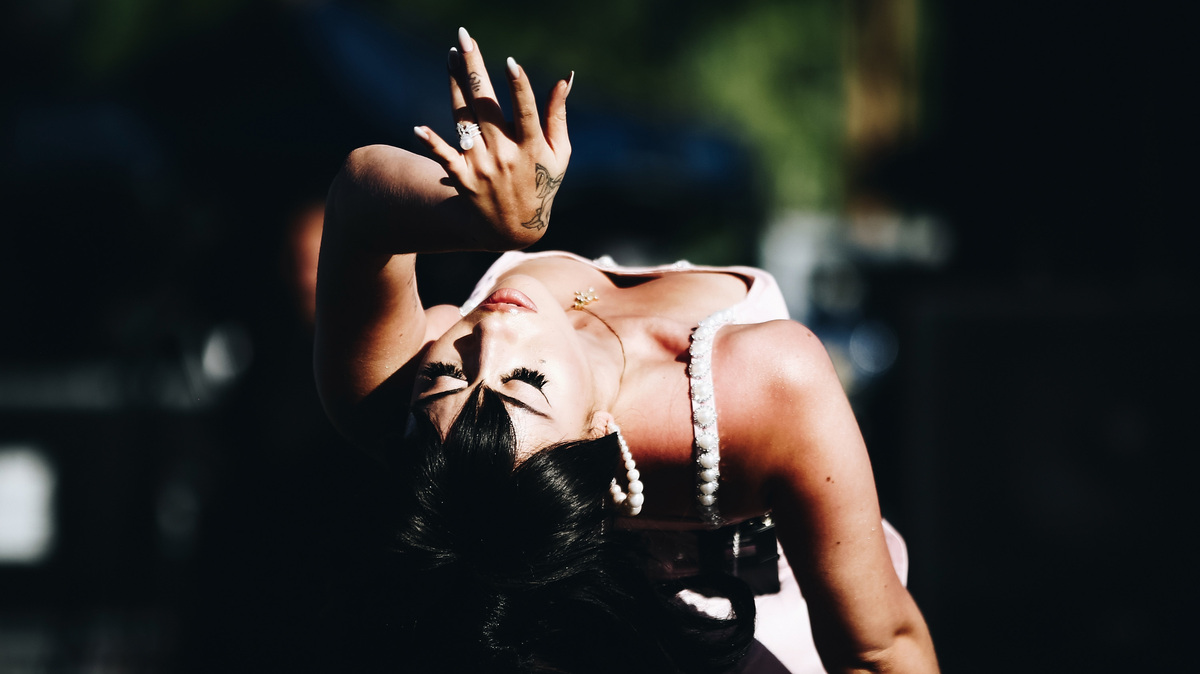 When feminist provocateur Jenny Hval revealed her transfixing and cinematic fifth solo album, she'd already been turning her poetry into avant-garde compositions for nearly a decade. On Apocalypse, girl's third track, Hval pierces into the propagandist claims that feminism's battles have been won. When capitalism defines progress to mean "I can consume what I want now," as Hval sings with conviction over an unsettlingly steady beat, it's clear the fights are far from over. —Liz Pelly

When time-traveling noise poet Camae Ayewa released her debut studio record in 2016, it was like a boiling-over of energy she'd harnessed through years of art and activism. With its confrontational, punk-industrial Afrofuturism, Fetish Bones broke new ground, and "Deadbeat Protest" was its toughest punch. "Trying to save my black life by fetishizing my dead life," Ayewa shouts. Its earworm refrain distills the record's rage against racist violence: "You can see my dead body at the protest." —Liz Pelly

Mica Levy was an undersung force of '00s experimental pop, and this is her masterpiece. Equally danceable and iconoclastic, "Golden Phone" is like a musical arts and crafts project, more genre-confounding than genre-bending. Found sounds and jury-rigged instruments do most of the work: Levy's voice sighs and samples back rhythmically; the fuzz-buzz of a vacuum cleaner lurks here and there; and shredding through the chorus is "the Chu," a highly adapted guitar Levy named after herself. —Isabel Zacharias (KMHD)

A full eight years before Lemonade, Jazmine Sullivan handed down punishment for infidelity by applying blunt instrument to automotive glass. The deliciously menacing R&B tango unfurls like a four-minute film noir, weaving sinister strings around rich-and-raspy vocals that really do get kind of dark for the pop charts ("I guess I'll always have these ugly scars"). Or were they? Proving the enduring appeal of a good revenge fantasy, Sullivan's sophomore single earned a Grammy nomination for Best R&B Song and hit No. 31 on the Billboard Hot 100. —Alison Fensterstock

Chilean singer Mon Laferte has deftly woven the high drama of bolero with the sensuality of pop and the guttural ache of the blues since 2003. On 2017's "Pa' Dónde Se Fue," Mon Laferte's voices strikes like a fist through salt water over Andean flutes and strings in a tale of an absent father, her most intimate work to date. His absence, palpable through her wavering grief and anger, gives way to fill the room instead with the fronteriza spirit that survived and blossomed in its place. —Stefanie Fernández

On Big Thief's song "Mary," frontwoman Adrianne Lenker breaks form, trading her electric guitar for a soft piano arrangement. Over the warm drone of a keyboard, she strings together words and memories, spinning a love song to friendship and a hymn of herself. Arriving almost a year after Big Thief's debut album Masterpiece, "Mary" is one of many women we meet on Capacity, elevating their perspectives with intimate and bold femininity. —Annie Bartholomew (KTOO)

Maren Morris moved to Nashville and wrote songs for other country crooners before her ode to long drives and her faith in a car's FM dial, "My Church," made her a Music City star in her own right. Her windows-down belt soars over every call for a "Hallelujah," but her wry wordplay that has her cussing on Sundays was merely a precursor to her major cross-over collaboration (with Zedd on "The Middle") and an already-packed awards shelf. —Hilary Hughes

Written in response to the Federal Marriage Amendment, which would have outlawed gay marriage in the U.S., Gossip's "Standing in the Way of Control" became a rallying cry of liberation, empowerment and unity. With its minimal yet pulsating instrumentation and Beth Ditto's impassioned, soulful vocals, the song signaled the trio's evolution from dancepunk phenoms to pop disrupters. Today, its message rings as powerfully as ever for anyone who's ever felt marginalized or constrained. —Jamie Ludwig

In 2004, Ciara upped the ante for summer jams. With her debut single, the 18-year old artist tapped into everything that was of the moment that season: young, sexy, glamorous independence. "Goodies" spent most of the summer climbing the charts, only to peak at No. 1 on the Billboard Hot 100 and stay there for seven straight weeks. Whether that's due to Ciara's smooth vocals or that very dope whistle is still up for debate. —Leah Donnella

"Black Origami" is the title track of Jlin's 2017 album and the seed from which it grew. Rapidfire drums, frenetic percussion and piercing synth lines slalom in and out of one another with guile and gusto. There are flashes of footwork — the Chicago sound that got the Indiana producer hooked on making music back in 2007 — but Jlin's urgent composition unfolds into something altogether her own. Anyone interested in the future of electronic music should be paying attention. —Ruth Saxelby

Early in Elizabeth Cook's career, and especially during her brief stint in the major label country world, some people recognized her star power while underestimating her intellect. It wasn't until Cook began to lean on the idiosyncrasy of her vantage point — combining downhome roots, bohemian taste, earthy feminism and a slightly warped wit — that she established herself as one of the most magnetic singer-songwriters working in the Americana scene. In "Heroin Addict Sister," a vivid, conversational character study that she penned alone for her defining album Welder, Cook manages to tease out the absurd indignities suffered by an addict and those who love her. The lyrics are full of observations both wry and devastating, and her pinched, girlish drawl conveys equal amounts of tenderness and exasperation, all of which makes it ring powerfully true. —Jewly Hight

Because Joanna Newsom is such a singular composer and arranger, it's easy to get lost in the dizzying craftsmanship of her records – all the oddball harmonic shifts and unexpected turns of phrase. But each of her songs has a heavy emotional center, too. "Sapokanikan," like much of her fourth LP, Divers, is about death, and the way it grounds and gives real stakes to human relationships. It's a strange and beautiful tribute to the risks we take to love each other. —Amanda Petrusich

Frances Quinlan is a beacon of empathy. Recording as Hop Along for over a decade, the Philadelphia-based songwriter has perceptively, ecstatically amplified the stories of undersung people with a literary edge that has influenced a generation of songwriters, including Waxahatchee's Katie Cruchfield. Quinlan's voice, ripped and tattered at the edges, is like none other in rock. There is pure conviction in every grain of "Tibetan Pop Stars," which Mark Hoppus called "the most painfully beautiful song ever." —Jenn Pelly

In 2015, composer Julia Wolfe won the Pulitzer Prize in music for Anthracite Fields, a large-scale work for chorus and instrumental sextet that summons up life in Pennsylvania coal-mining country around the turn of the last century. (Wolfe is one of very few women to have won a music Pulitzer.) Later that year, Bang on a Can All-Stars and The Choir of Trinity Wall Street released an original recording of Anthracite Fields. "Flowers" is the piece's luminous and shimmering fourth movement, evoking the gardens planted by miners' mothers, wives and daughters. — Anastasia Tsioulcas

Andra Day's "Rise Up" wasn't intended to be an anthem. The San Diego soul singer says she originally wrote the song, from her debut album Cheers to the Fall, as a prayer for herself during a difficult time. But the rousing song resonated widely with activist communities after its 2015 release — the Black Lives Matter movement in particular. Day performed the song at the 2016 Democratic National Convention just after the mothers of Sandra Bland, Trayvon Martin and Jordan Davis addressed the crowd; by then, "Rise Up" had become an anthem not just for personal perseverance, but for the wider struggle for social justice in our era. —Marissa Lorusso

Priests' wiry post-punk sound and take-no-prisoners vision crystallizes on "And Breeding," the muscular track that closes its stunning 2014 EP, Bodies and Control and Money and Power. The band's frenetic energy pulses under singer Katie Alice Greer's unmistakable howl, building to its immediately memorable final line — one that pithily sums up the band's impatient, status-quo-bashing, anti-neoliberal vision: "Barack Obama killed something in me," Greer repeats menacingly, "and I'm gonna get him for it." —Marissa Lorusso

2005 — the year Amerie's "1 Thing" was released — was a golden year for R&B love songs. But for Amerie, it was a departure from 2002's "Why Don't We Fall in Love," the jazzy summer swell that introduced her. Produced by Rich Harrison, the dizzying pace of "1 Thing" encapsulates the thrill of infatuation and the go-go beat moving it along made it infectious. —Sydnee Monday

After developing a cult fan base for writing honest pop-rock songs, twin sisters Tegan and Sara Quin were more ambitious than ever on 2007's The Con -- which is to say, they dug deeper into their female lives, into their queer relationships, into feeling itself. This soaring title track is Tegan and Sara's most explosive song in a catalog full of them, an exorcism of pain amid failing communication. You can feel desperate vulnerability in every jagged angle of "The Con."—Jenn Pelly

Kali Uchis, the Colombian-American singer born Karly-Marina Loaiza, grew up marginally homeless in the Virginia suburbs, often resorting to spending nights in her car; "Tyrant" makes it clear she's only been working on nailing this whole survival thing ever since. Paired with Jorja Smith on the joint, the two joyride in matching magenta Vespas through a saccharine street lined with babes, complete with celestial swells and candy-coated vocals. It's a party — and while the vino verde may not flow forever, that blissful buzz will last. —Beca Grimm

Notions of femininity have always been at odds with each other in our society: At once, they entail being smart but non-threatening, expressive yet not outwardly emotional. Enter Olympia, Wash.'s defunct hardcore band G.L.O.S.S. (which stands for Girls Living Outside Society's Shit) and its rallying cry, "G.L.O.S.S. (We're From the Future)." In this incisive call to arms, vocalist Sadie Switchblade calls out how hypocritical these expectations are, especially to outsiders — including queer and transgender people — who don't meet these impossible, exacting standards: "Now they tell us we aren't girls / Our femininity doesn't fit!" The song, created by and for "f****** future girls living outside society's shit," is a crucial part of the hardcore canon, one that both rejects and redefines these ideals one syllable at a time. —Paula Mejia