Accessibility links
'The Provocative Colette' Celebrates The Power of Beauty Cartoonist Annie Goetzinger's new biography of the French writer and provocateur Colette focuses on her most youthful, beautiful decades — set in a romanticized, cleaned-up version of Paris.

'The Provocative Colette' Celebrates The Power of Beauty

'The Provocative Colette' Celebrates The Power of Beauty 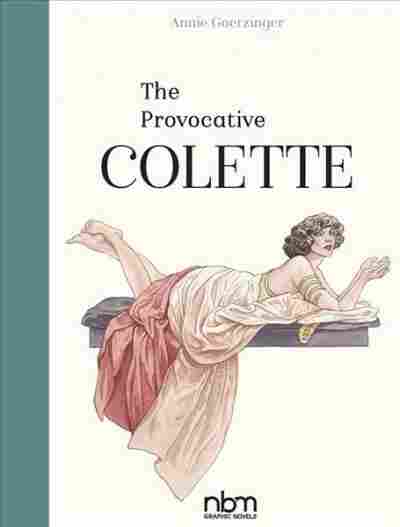 Lusty, obstreperous and ambiguously liberated, Colette has always been a heroine for a certain kind of person: The kind who believes you can do anything if you do it beautifully. The grande dame of 20th-century French letters shocked fin de siècle Paris with her literary and theatrical excesses, and cycled through husbands and lovers almost as briskly as she churned out books. And for many years, she looked great doing it.

Annie Goetzinger is deeply interested in that last characteristic, maybe too deeply. In The Provocative Colette, a graphical biography, Goetzinger restricts herself to the writer's most youthful and beautiful decades. The 20-year-old Colette's physical charms were an undoubted asset when she arrived in Paris from the provinces on the arm of her 34-year-old husband, the journalist and libertine Henry Gauthier-Villars, in 1893. Willy, as he was known, disabused his bride of any stuffy notions of marital fidelity, and her notorious amorous career began. Two divorces, an affair with a mannish Marquise (whom she kissed onstage at the Moulin Rouge, causing a riot) and the seduction of her 16-year-old stepson are among the highlights of The Provocative Colette. Throughout it all, Goetzinger elides emotional storms, portraying Colette and her loves as improbably, unsinkably resilient. The only real exception is when husband No. 2 objects to her affair with his son. His reaction is described, not illustrated: "Father and husband betrayed! Jouvenel leaves the room, dumbstruck."

Goetzinger gives similarly short shrift to Colette the writer, offering little insight into a mind as fecund as it was unfettered. We seldom see her at work and learn little about what made her want to write — though we do witness her insecurity. "It's awful to think, like I do every single time I start a new book, that I don't have and never have had any talent," the bestselling author frets as she signs copies of 1920's Cheri. Mostly, though, Goetzinger sees Colette's literary work as just one more way of living exuberantly, along with her journalism, her theater performances, her screenwriting and all those mesmerizing love affairs. But exuberance alone can't explain the perverse and stubborn compulsion that makes a writer. In Colette's case it was a formidable compulsion indeed: Her oeuvre totaled 80 volumes by her death, in 1954, at 81; she'd had to stop writing in her 70s because she could no longer hold a pen.

Goetzinger's heroine seems to pursue her adventures in a delicately tinted, crystalline utopia.

More importantly, Goetzinger's art is beguiling enough to excuse her narrative slip-ups. Here as in 2013's feather-light Girl in Dior, Goetzinger draws lovely things and lovely people with elegant facility. She utterly rejects the ironic distortions and self-conscious artificiality that characterize many contemporary comics. Her style is deceptively transparent: She seems to be relaying beautiful visions, not crafting them. But her hand is tyrannical nonetheless. Just as she skips over the torturous parts of Colette's romantic progress, she banishes all grit and grot from turn-of-the-century Paris. There are no musty corners or frayed gowns in her version of Colette's world, none of the filth or poverty of a teeming city in an industrial age. Goetzinger's heroine seems to pursue her adventures in a delicately tinted, crystalline utopia.

That's at odds with the actual Colette's realist agenda. But Goetzinger's sentimentality would probably win her subject's approval anyway. Colette was committed to the power of beauty; she even went into the cosmetics business in the 1930s. For anyone who likes to believe that beauty is a prime driving force in life — and that it excuses many failings — Goetzinger offers eloquent support.