Accessibility links
Iran Is Unenthusiastic After President Trump Suggests A Meeting The leaders of the U.S. and Iran haven't met in person since before the Islamic Revolution in 1979. Trump says he's ready to sit down; Iranian President Hassan Rouhani hasn't expressed any interest. 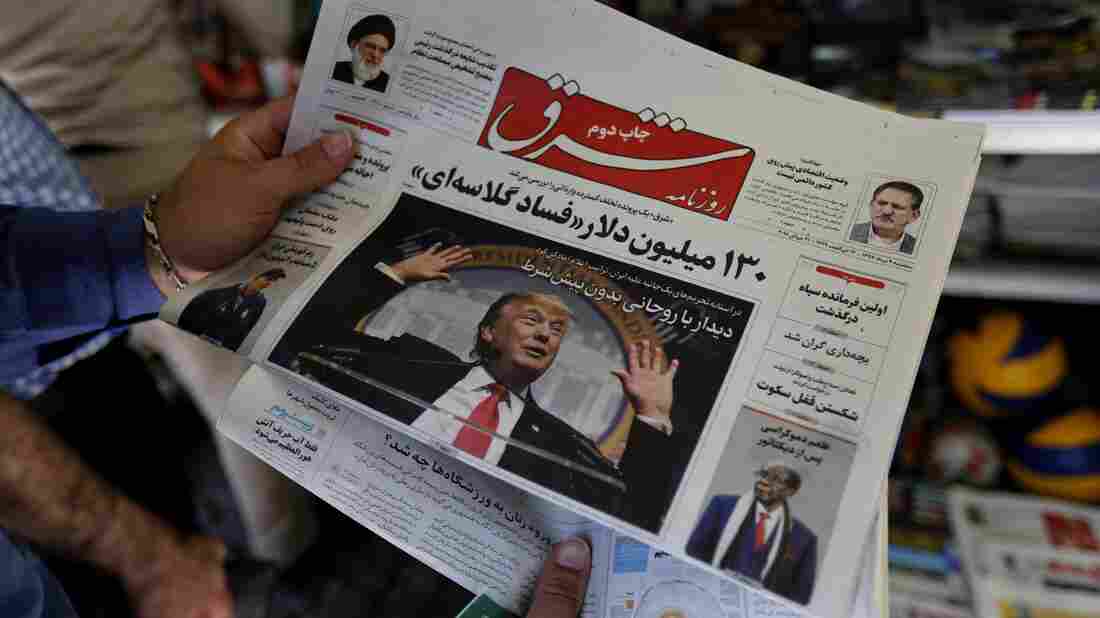 A man in Tehran looks at a newspaper with a picture of President Trump on the front page on Tuesday. Iran's currency traded at a fresh record-low of 119,000 to the dollar today, a loss of nearly two-thirds of its value since the start of the year as U.S. sanctions loom. Trump says he's willing to meet with Iranian leaders, but Iran doesn't seem eager to sit down. Atta Kenare/AFP/Getty Images hide caption 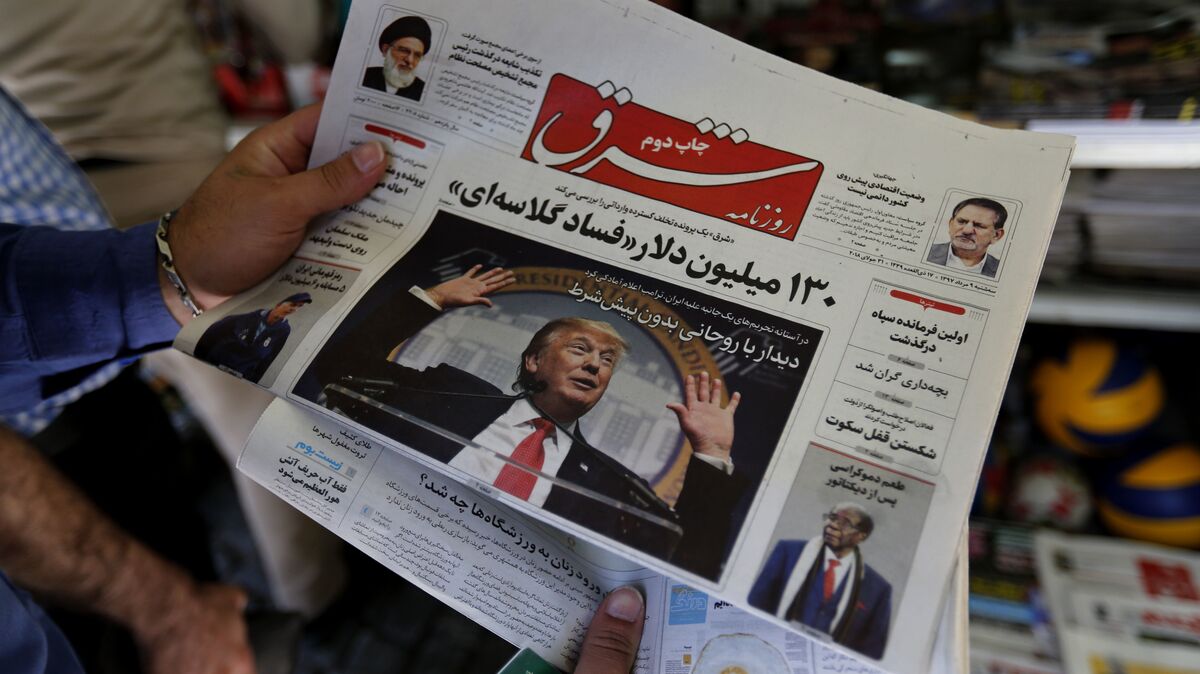 A man in Tehran looks at a newspaper with a picture of President Trump on the front page on Tuesday. Iran's currency traded at a fresh record-low of 119,000 to the dollar today, a loss of nearly two-thirds of its value since the start of the year as U.S. sanctions loom. Trump says he's willing to meet with Iranian leaders, but Iran doesn't seem eager to sit down.

Although President Trump said Monday that he would be willing to meet with Iranian President Hassan Rouhani at "any time," it looks like that meeting won't be happening any time soon — multiple Iranian officials have played down the possibility of a sit-down, without ruling it out entirely.

The leaders of the U.S. and Iran have not met in person since before the Islamic Revolution in 1979. A phone call between Rouhani and former President Obama in 2013 was the first direct conversation of any kind in decades. That call was part of the lengthy negotiations toward the multinational nuclear deal reached with Iran in 2015 — which Trump pulled out of earlier this year.

As a result of Trump's decision to withdraw from the agreement, some previously lifted U.S. sanctions will be reimposed on Iran over the next few months.

The bluster was gone this week, as Trump instead issued an invitation for a summit.

On Monday he said he would be willing to meet with Iran's leaders "any time they want," with "no preconditions."

However, as NPR's Peter Kenyon notes, "shortly after Trump spoke and said no preconditions, Secretary of State Mike Pompeo went on CNBC and he laid out a number of conditions, ones he's talked about before."

Pompeo called for the Iranian leaders to "demonstrate a commitment to make fundamental changes in how they treat their own people" and to "agree that it's worthwhile" to enter into a new nuclear agreement.

Iran, in turn, has responded with a list of conditions of their own.

Hamid Aboutalebi, an adviser to Rouhani, tweeted on Monday, calling for the U.S. to respect Iran and return to the original nuclear deal. Semi-official Iranian news agency ISNA has a translation:

"Respecting the Iranian nation's rights, reducing hostilities and returning to the nuclear deal are steps that can be taken to pave the bumpy road of talks between Iran and America. Iran had showed its openness to dialogue in the past, particularly with the phone call between Rouhani and Trump's predecessor Barack Obama in 2013. That dialogue was based on the idea of confidence-building measures and the nuclear deal was an achievement of this effort and it must be accepted."

The vice speaker of Iran's parliament also told reporters that the U.S. withdrawal from the 2015 deal, known as the Joint Comprehensive Plan of Action, made new negotiations a nonstarter.

"Talks with the US would have been right had the US not withdrawn from the JCPOA and imposed sanctions on Iran," Ali Motahhari said, according to Iran's state-run IRNA news outlet. Under "appropriate" conditions negotiation can be helpful, but currently such talks would just bring humiliation to Iran, he said, according to IRNA.

At the same time, senior cleric Ali Akbar Nategh Nouri, a member of Iran's Expediency Council, said it didn't make sense to reject the offer out of hand.

" 'It should be discussed in the Supreme National Security Council,' said Nategh Nouri, who is also a former aide to Supreme Leader Ayatollah Ali Khamenei. Nategh Nouri said 'we have to contemplate' the gesture, but also cautioned 'we should not rejoice over this offer and not get excited.'

" 'Trump may take advantage of this over-excitement,' he said, the state-run IRNA news agency reported. 'It could be a test for us.' "

Kenyon reports that Rouhani himself — who has not publicly responded to the invitation — told parliament that the U.S. has proven it doesn't keep its promises and that Iran will protect its right to export oil, which is the target of U.S. sanctions.

Kenyon says there will be some pressure on Iran to negotiate with the U.S. — but he puts that in perspective.

"Iran came to the table to negotiate the [2015] nuclear deal after years of sustained pressure from the U.S., Britain, France, Germany, Russia and China," Kenyon says. "Now all of those countries except the U.S. are on Iran's side, wanting to stick with the deal and keep doing business.

"But it's not clear they have a workable plan to do that. The Iranian economy is suffering badly, inflation is up, the rial is down, so there will be pressure — but if Iran's past reactions to pressure are any guide, it will take some time if there ever is a meeting."