Accessibility links
After Calf's Death, Orca Mother Carries It For Days In 'Tragic Tour Of Grief' What began as a moment of joy ended in tragedy when the infant died last week. Since then its mother has refused to let go, holding her child tightly in what experts call a moving expression of grief.

For a brief moment last week, just off the coast of southwestern Canada, the typically grim outlook confronting orcas took on a hopeful hue. A whale watch operator, staring through binoculars, had caught sight of a healthy calf swimming beside its mother — a rare beacon for a population that had not seen a healthy infant in years.

It was not to last, however. By the time experts with the Center for Whale Research arrived, just half an hour later, the calf had already died.

But that's not the end of this story. 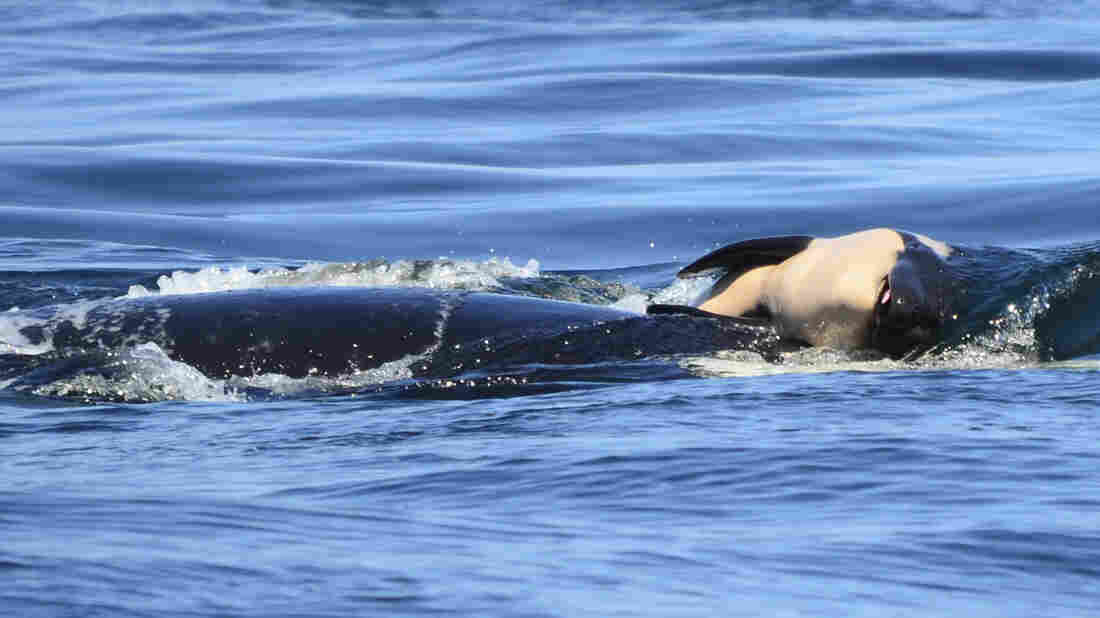 The mother orca, known as J-35, pushes her dead calf to the surface last week off the coast of Victoria, British Columbia, Canada. The infant orca died shortly after its birth, but its mother has been observed carrying it with her in the days afterward. Michael Weiss/Center for Whale Research via AP hide caption 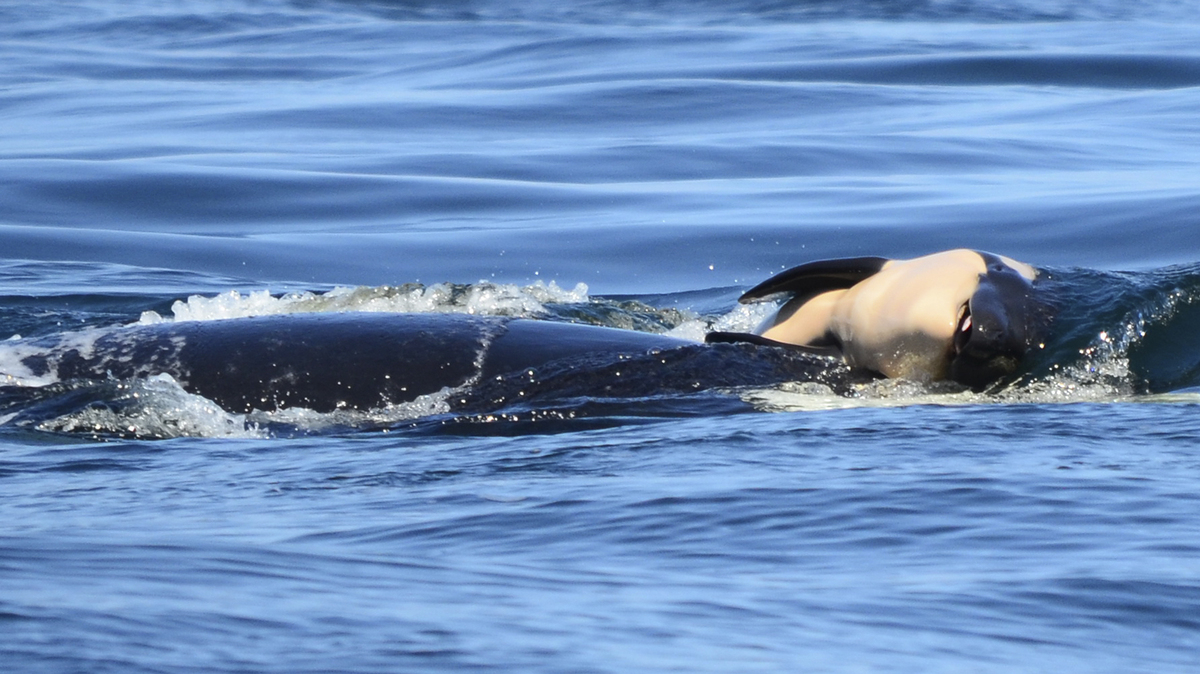 The mother orca, known as J-35, pushes her dead calf to the surface last week off the coast of Victoria, British Columbia, Canada. The infant orca died shortly after its birth, but its mother has been observed carrying it with her in the days afterward.

Since the infant's death, its mother has carried its body with her everywhere she goes. Sometimes nudging the calf with her nose, sometimes gripping it with her mouth by the flipper, sometimes diving to retrieve it when she loses her grip, the mother has been observed bearing her dead child for at least seven days across hundreds of miles.

"It's a very tragic tour of grief," says Ken Balcomb, the center's founder.

As part of the Orca Survey, Balcomb and his colleagues have spent 42 years identifying and monitoring each individual orca in the Southern Resident killer whale population, an extended family of some 75 orcas living in three pods. In the survey's catalog, the pods go by letters and the orcas themselves are identified by numbers — which explains the mother's most commonly used name: J-35.

Jenny Atkinson, executive director of the Whale Museum on Washington's San Juan Island, prefers to call her by another name: Tahlequah, a moniker given her as part of the museum's adopt a whale program. 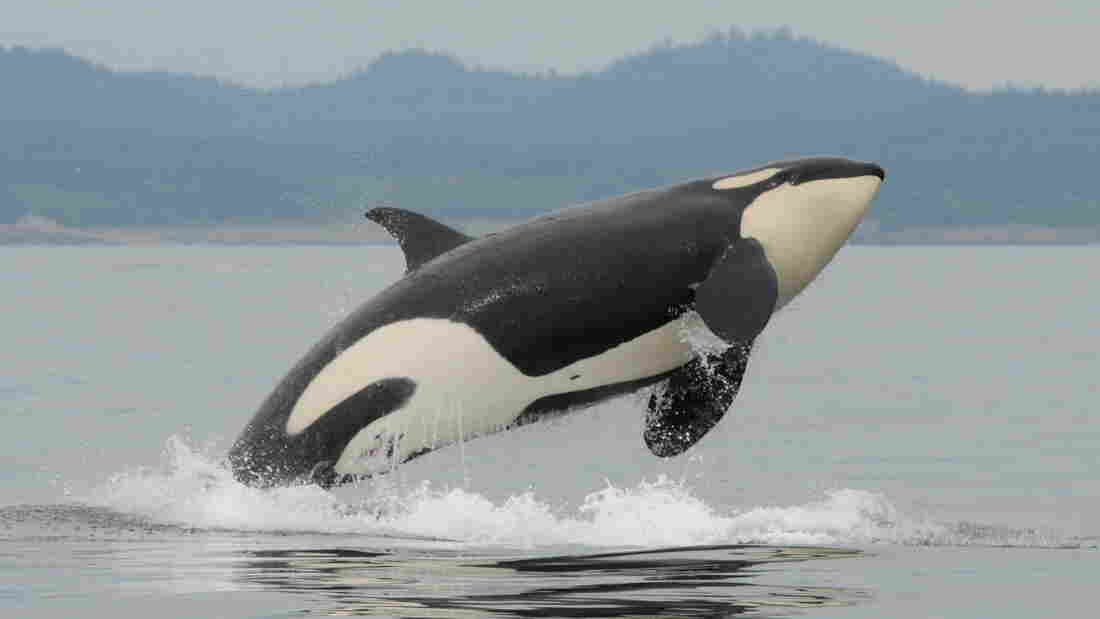 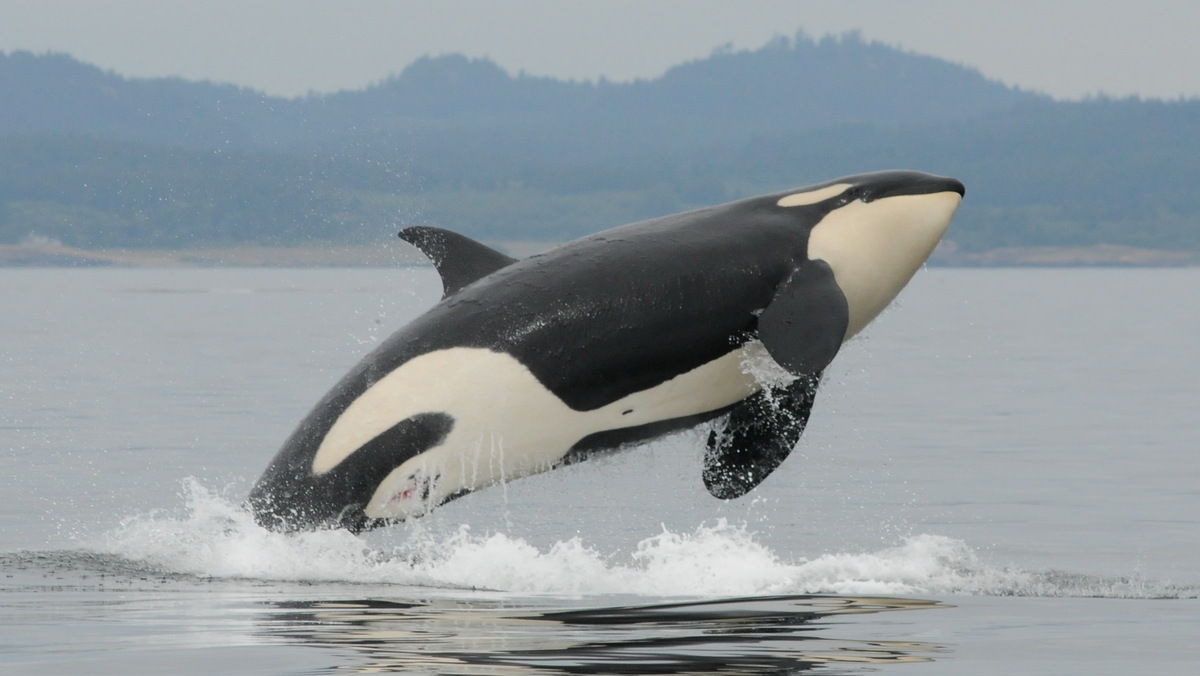 Orca J-35, also known as Tahlequah, seen in 2014 off the coast of British Columbia, Canada.

"She's a normal, joyful whale. She's 20 years old. She's got an 8-year-old son," Atkinson says, adding that Tahlequah likely had another pregnancy a few years ago that she didn't bring to term.

"She has one successful calf, she may have had a miscarriage and now we have a third one that she met," Atkinson adds. "And I can only imagine, once that baby took breath and swam by mom, that the bond they would have already shared had to have deepened. So maybe that makes this even more painful."

Atkinson says it's not uncommon for an orca to carry her dead infant for a few hours, perhaps even a day. Balcomb saw a report dating back to the 1960s that described an orca doing so for a week. But in all their decades of combined experience, neither of them has personally observed a scene like the one that has unfolded over the past seven days.

"Look at some human traditions — from an Irish wake or an open casket, to when an elected official lies in state — when people want to come by and pay tribute to a person," Atkinson says. "There are so many ways that humans have done multi-day ceremonies to honor the dead and say that even though they're no longer a part of our community physically, they will always be a part of us.

"And I think that's what Tahlequah and her family are doing."

There's a word for that kind of behavior: grief.

"We can't get into the animal's mind, we don't know if she has a concept of death," says anthropologist Barbara J. King, author of How Animals Grieve and longtime writer for NPR's 13.7: Cosmos and Culture. "But it seems to me that she's quite aware that there's something very wrong, that her baby is no longer the way that it should be — and she's so distressed about it that it rises to the level, in my estimation, of grief."

That behavior can have its own dangers — not just to Tahlequah, who has shown signs of exhaustion as she carries her dead child, but also to Tahlequah's adult son and others. Given the fact that orcas move in matrilineal groups, dependent on mothers and grandmothers, her death may threaten others in her pod.

And that, King says, is "terrifying." The numbers explain why.

Listed as an endangered species for more than a decade, Southern Resident killer whales have not had a single successful pregnancy in the past three years, according to the Center for Whale Research. "We should be getting about nine babies a year," Balcomb says.

He traces the orcas' decline to the dwindling of their food source, Chinook salmon, several species of which are listed as endangered in their own right. Between toxins in the water and dams obstructing access to their spawning regions, the salmon's numbers have suffered dramatically — and so too have the numbers of the predators who feed on them.

Southern Resident killer whales have lost roughly a quarter of their population in just over two decades, according to Washington Gov. Jay Inslee, who signed an executive order earlier this year seeking to protect both orcas and their primary prey.

As for Tahlequah, a thick fog left observers unsure Tuesday whether she is carrying her child for yet another day or has let loose the morbid weight she carried. Soon her decision will be made for her, because even in the cold waters of the Pacific Northwest, the calf will decompose with time.

Before then, though, Balcomb hopes something good may come from this grim vigil.

"She's telling the story far better than I can that these whales are in trouble," he says.

"It's a message. These are pretty amazing animals. They know they're being watched, they know what's going on and they know that there's not enough food. And maybe they know that we have something to do with it."