Accessibility links
Judge Issues Temporary Restraining Order Blocking 3D-Printer Guns The judge said the untraceable weapons could end up in the wrong hands. But it's unclear how effective the order is since some gun plans have already been online for four days. 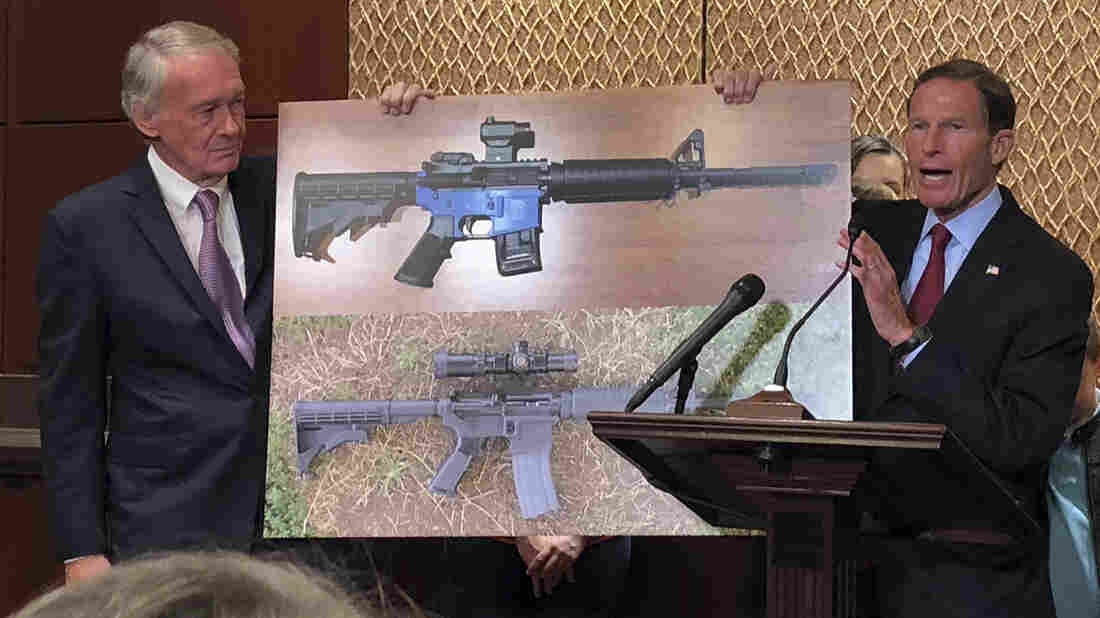 Sens. Edward Markey, D-Mass., left, and Richard Blumenthal, D-Ct., display a photo of a plastic gun Tuesday, as they call for President Trump to reverse an administration decision to allow a Texas company to make blueprints for a 3D-printed gun available online. Trump announced over Twitter that he is "looking into" the sale of 3D plastic guns to the public. Matthew Daly/AP hide caption 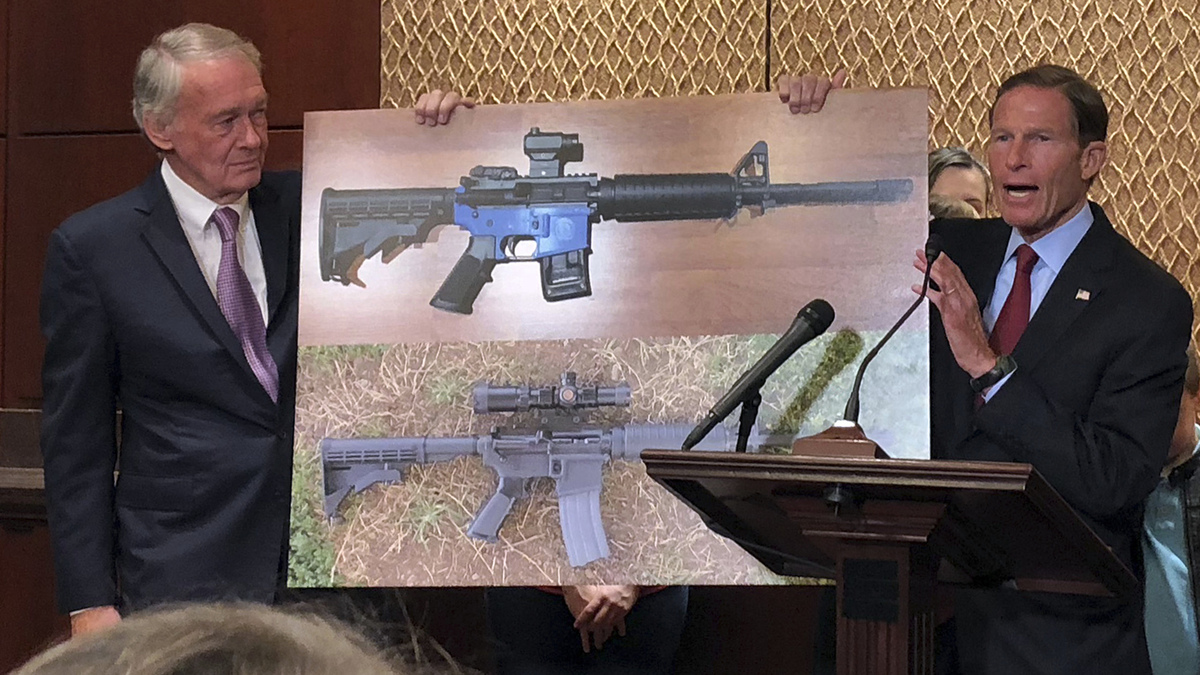 Sens. Edward Markey, D-Mass., left, and Richard Blumenthal, D-Ct., display a photo of a plastic gun Tuesday, as they call for President Trump to reverse an administration decision to allow a Texas company to make blueprints for a 3D-printed gun available online. Trump announced over Twitter that he is "looking into" the sale of 3D plastic guns to the public.

A federal judge in Seattle issued a temporary restraining order on Tuesday that prevents the publication of online 3D blueprints for plastic yet deadly guns.

U.S. District Judge Robert Lasnik said the untraceable weapons — which bear no serial numbers and can be printed from directions downloaded from the Internet — could end up in the wrong hands, The Associated Press reported.

Lasnik's ruling came after eight states and the District of Columbia filed a lawsuit to block a government settlement with Cody Wilson and his Texas-based company, Defense Distributed, which made it legal for the company to make the do-it-yourself computer plans readily available to any paying customer.

The U.S. State Department agreed to a settlement in June after a five-year legal battle that had forced Wilson to remove the online tutorials, by arguing they violated firearm export laws. Wilson has argued that the instructions are protected under the First and Second Amendments.

"Once again, my office had to hold this Administration accountable to the rule of law," Washington Attorney General Bob Ferguson, who filed the lawsuit Monday, said in a statement after the ruling.

"These ghost guns are untraceable, virtually undetectable and, without today's victory, available to any felon, domestic abuser or terrorist. I hope the President does the right thing and directs his administration to change course," he added.

But it is unclear how effective the temporary restraining order is since the schematics for one of its guns — The Liberator — were posted on the company's website on Friday — five days ahead of the company's announced release date.

"It is immediately obvious to anyone who looks at this issue that 3D-printed guns are nothing short of a menace to society, and we are thrilled that the court ruled in this manner," stated Avery Gardiner, co-president of the Brady Campaign. "The efforts of these Attorneys General throughout the nation have helped strike a powerful blow against the scourge of 3D-printed guns, but we know this fight is not yet over. We will continue to do everything in our power to make sure that this temporary halt in publication becomes a permanent one."

On Tuesday Senate Democrats introduced a bill that would make it illegal to publish 3D-printer gun designs online. A second bill would require weapons to include at least one metal component with a serial number, effectively making them traceable.

Throughout the day several Democratic lawmakers criticized President Trump and the administration for capitulating to Wilson, despite previous legal victories.

The president responded through Deputy Press Secretary Hogan Gidley, who told reporters: "In the United States, it's currently illegal to own or make a wholly plastic gun of any kind, including those made on a 3D printer. The administration supports this nearly two-decade-old law, and will continue to look at all options available to us to do what is necessary to protect Americans while also supporting the First and Second Amendments."

Trump also announced over Twitter that he is "looking into" the sale of 3D plastic guns to the public and said he had already spoken to the NRA about it but did not expound on the conversation and neither did Gidley.

Amid the legal fights Wilson has continued to amass designs for new weapons "as well as working on a computer-controlled mill known as the Ghost Gunner that can automatically make functional AR-15 rifle parts out of a block of aluminum," CNET reported.

CNN reported Wilson said he had suspended downloads of the 3D-printer gun "until he reviews the order."

"We're disappointed," Wilson told The New York Times. "The law is clear. These plaintiffs just don't have standing to challenge the settlement. You can't unclose a federally closed matter. And I consider the matter to be closed."

The judge has scheduled a hearing on Aug. 10.