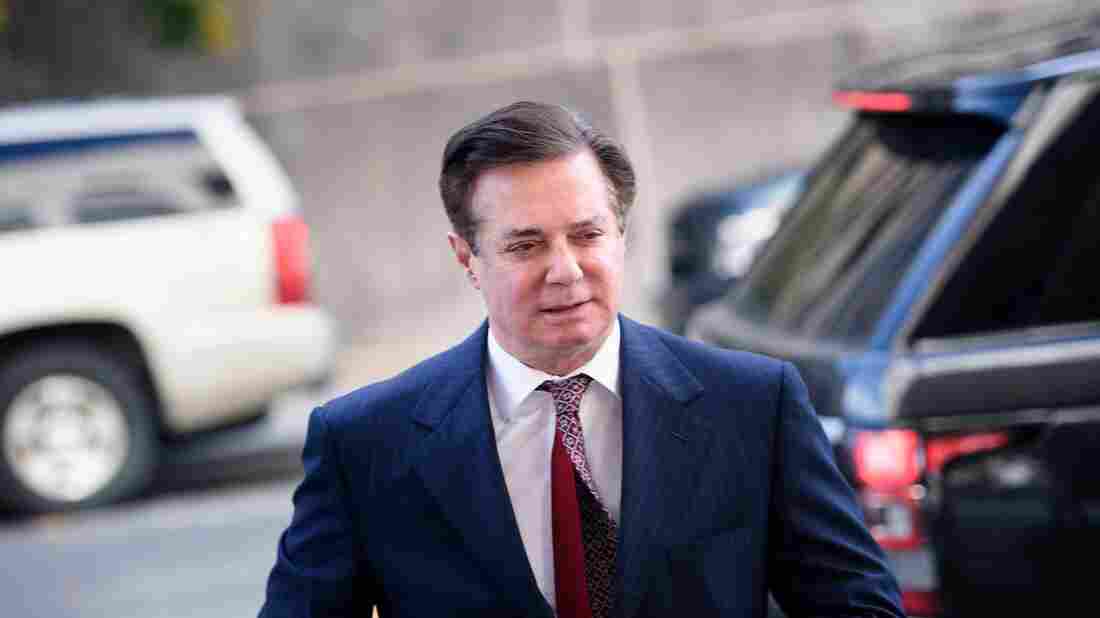 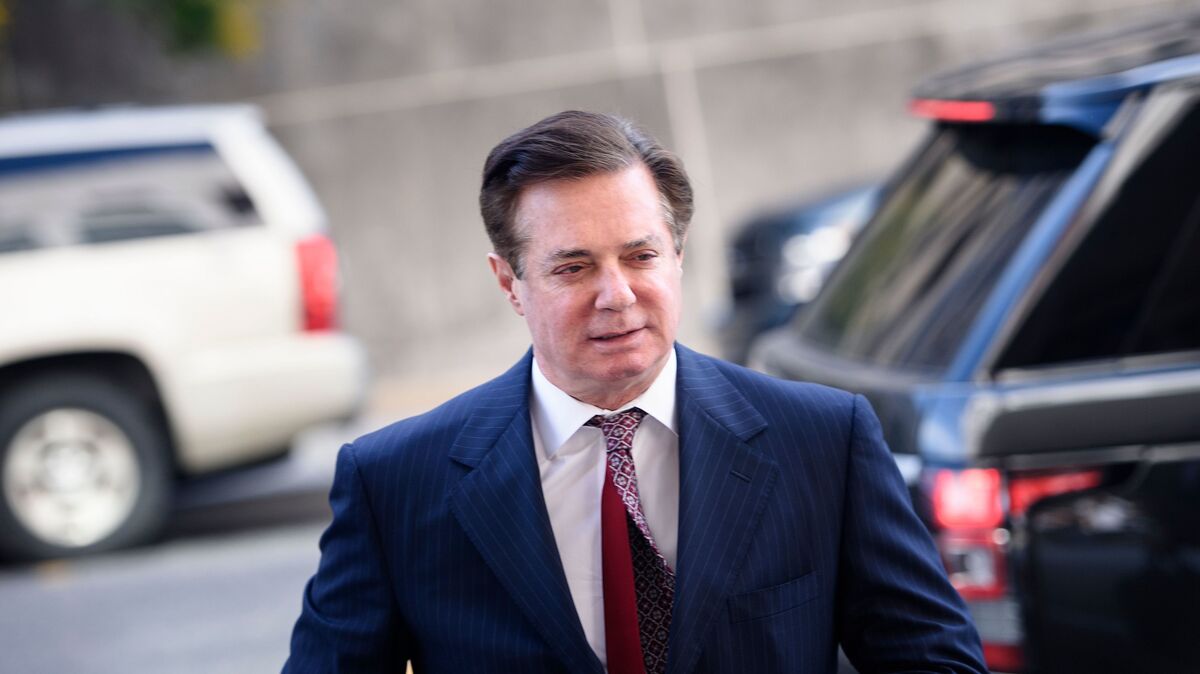 Paul Manafort, Trump's former campaign chairman, is on trial in Alexandria, Va., for bank and tax fraud charges, not, as Trump noted in a Twitter thread Wednesday morning, for "collusion."

"[Manafort] worked for me for a very short time. Why didn't government tell me that he was under investigation," Trump wrote. "These old charges have nothing to do with Collusion - a Hoax!"

Paul Manafort worked for Ronald Reagan, Bob Dole and many other highly prominent and respected political leaders. He worked for me for a very short time. Why didn’t government tell me that he was under investigation. These old charges have nothing to do with Collusion - a Hoax!

Trump called the Mueller investigation a "terrible situation" and said Attorney General Jeff Sessions "should stop this Rigged Witch Hunt right now, before it continues to stain our country any further."

Sessions recused himself early last year from all matters related to the Justice Department's investigation of Russian interference in the 2016 election and possible coordination with Trump campaign aides, because of his adviser role in Trump's campaign. Deputy Attorney General Rod Rosenstein has been overseeing Mueller's probe since the special counsel was appointed last summer, and he, too, has recently come under fire by conservative lawmakers in Congress.

It's not the first time Trump has mentioned wanting to cut the Russia probe short.

He reportedly ordered White House counsel Don McGahn to fire Mueller last summer, an order the president eventually walked back when McGahn threatened to quit. Mueller has been interested in whether Trump attempted to obstruct justice at any point since at least last June, and The New York Times reported last week that the special counsel's lawyers have told Trump's legal team that they are specifically examining Trump's tweets related to obstruction.

What do you do when obstruction of justice takes place right out in the open, on Twitter, for the whole world to see? https://t.co/WhjHNr0mnk

White House press secretary Sarah Sanders was asked in Wednesday's press briefing about the tweet, and whether Trump wanted to "intervene" in Mueller's investigation.

"It's not an order, it's the president's opinion," Sanders said. "The president has watched this process play out but he also wants to see it come to an end, as he's stated many times. We look forward to that happening."

"He carefully used the word, 'should,'" Rudy Giuliani noted. Another Trump lawyer Jay Sekulow added: "The president has issued no order or direction to the Department of Justice on this."

After the Sessions tweet, the president tweeted again, two hours later, that Manafort was being treated worse than infamous gangster Al Capone.

"Looking back on history, who was treated worse, Alfonse Capone, legendary mob boss, killer and 'Public Enemy Number One,' or Paul Manafort, political operative & Reagan/Dole darling, now serving solitary confinement - although convicted of nothing?" Trump said. "Where is the Russian Collusion?"

Manafort has been in jail in Virginia since his house arrest was revoked earlier this summer when Mueller alleged that he was attempting to tamper with witnesses. He is not, however, in solitary confinement, which is an isolated cell normally used as a disciplinary tool.

As a high-profile inmate now at a Northern Virginia facility, he is in a unit separate from the general population, so that he can be protected.

In court filings that described the circumstances of Manafort's earlier confinement at a different facility farther from Washington, D.C., prosecutors described Manafort's situation as "a private, self-contained living unit, which is larger than other inmates' units." In it, Manafort has "his own bathroom and shower facility, his own personal telephone, and his own workspace to prepare for trial."

In monitored phone calls while at the Northern Neck Regional Jail in Warsaw, Va., Manafort had told others he is being treated like a "VIP," prosecutors said. 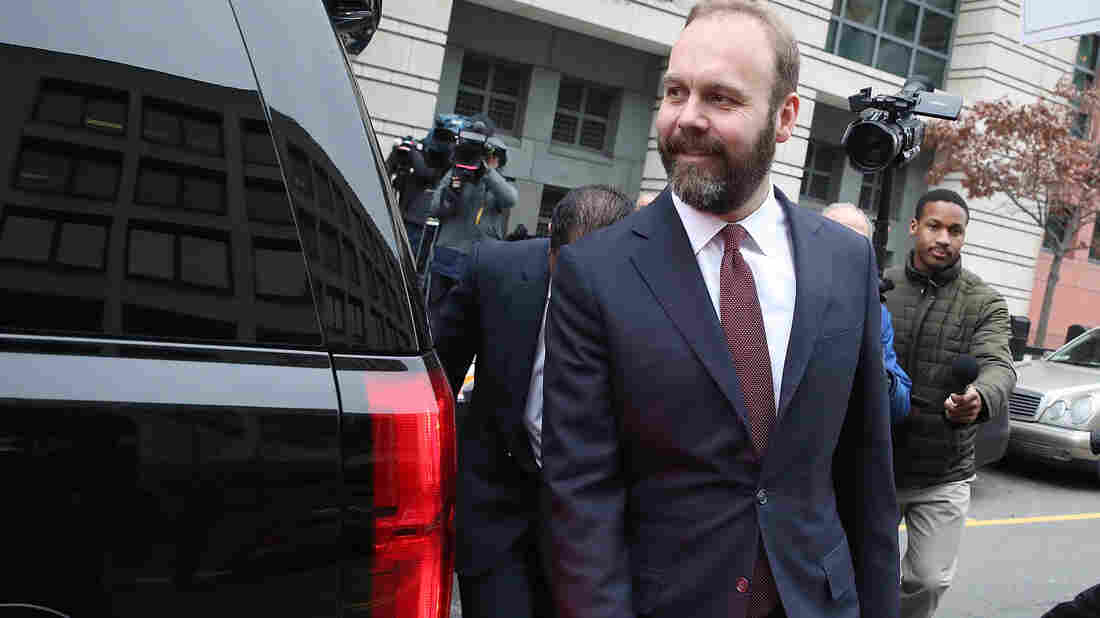 Rick Gates, a former associate of Paul Manafort, leaves the federal courthouse in Washington, D.C., after a February hearing. He is expected to be the government's star witness at the Manafort trial in Virginia. Mark Wilson/Getty Images hide caption 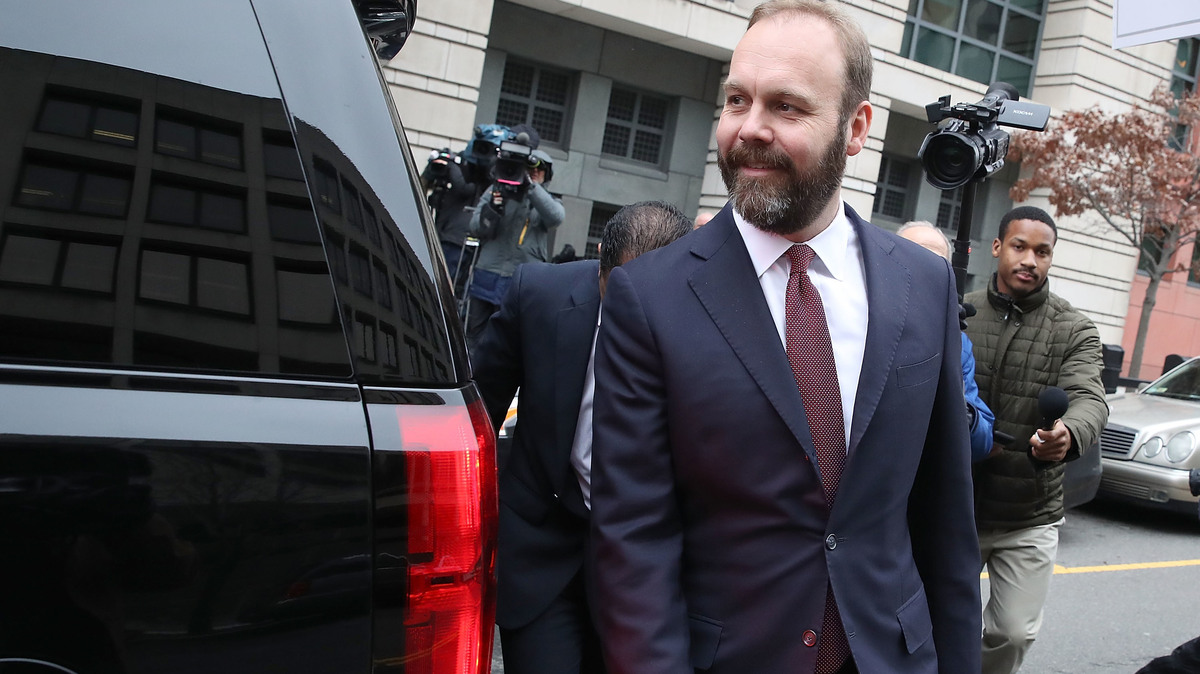 Rick Gates, a former associate of Paul Manafort, leaves the federal courthouse in Washington, D.C., after a February hearing. He is expected to be the government's star witness at the Manafort trial in Virginia.

On Wednesday, the second day of Manafort's trial opened with testimony from a political consultant who did work with Manafort in Ukraine, and an FBI agent who worked in counterintelligence, and closed with a number of men who sold Manafort luxury items like cars and expensive suits.

The most shocking moment of the day though, was actually about who may not testify: Rick Gates.

Gates, Manafort's former business partner, has agreed to cooperate with prosecutors; he was considered to be their star witness, as someone directly involved in Manafort's business dealings. Defense attorney Thomas Zehnle took aim at Gates in his opening statement Tuesday, saying Gates embezzled money and was lying to prosecutors to put the blame squarely on Manafort, setting up a credibility battle that seemed sure to culminate in Gates' testimony.

Assistant U.S. Attorney Uzo Asonye however, said Wednesday that Gates "may testify, he may not."

A number of reporters ran from the room at that moment, which Judge T.S. Ellis noted, saying Asonye sent them scurrying like rats from a sinking ship.

Asonye said he didn't have a reason for couching Gates' testimony that way, noting that prosecutors are constantly re-evaluating their witness list, and cautioning everyone still in the room not to read too much into his statement.

That moment came towards the end of the first half of testimony Wednesday, where the jury heard from a political consultant named Daniel Rabin, and an FBI agent named Matthew Mikuska.

Prosecutors used Rabin, similarly to how they used political consultant Tad Devine on Tuesday, to make it clear Manafort was the kind of boss who paid attention to detail. Both Rabin and Devine worked with Manafort over the past decade, in consulting work for the pro-Russia government of Ukraine.

"[Manafort] demanded a lot of people who worked for him," Rabin said. "He was thorough, he was strict."

FBI agent Mikuska was part of the team that executed the search warrant on Manafort's condo in Alexandria. During his testimony, more details were revealed about the search: the FBI did not have a "no-knock" warrant, as was previously reported by some outlets, allowing them to break into the property, Mikuska said. They knocked, and when they received no reply, they entered using a key.

Despite the tweetstorm President Trump was rustling up online, for the second day in a row so far, there was no mention of Russian interference in the courtroom.

There was, however, an interesting moment between the judge and attorneys, when Judge Ellis asked the prosecution to refrain from using the word "oligarch" to describe who was paying Manafort for his Ukrainian lobbying work.

The word, he said, has a negative connotation and could bias jurors. His request wasn't made in front of the jury.

"We're not going to have a case tried where [Manafort] is associated with despicable people, so he is despicable," Ellis said. "That's not the American way."

Prosecutors did, however, work again to paint Manafort as a man with expensive taste, who paid for things in unorthodox ways.

A parade of witnesses was brought to the stand — people who sold luxury cars, houses and expensive custom suits — and asked how Manafort paid for the items he bought. They all said international wire transfer, from banks abroad.

"He was the only one who did that," said Maximillian Katzman, of the luxury men's wear boutique Alan Couture.

The witnesses were also asked by prosecutors whether they ever dealt with Rick Gates, and all but one said no.

Thursday's testimony promises to be more of the same, with a number of bookkeepers, accountants and tax preparers scheduled to testify. Prosecutors said Wednesday, that because of the pace they're working on, they expect to close their case ahead of schedule next week. 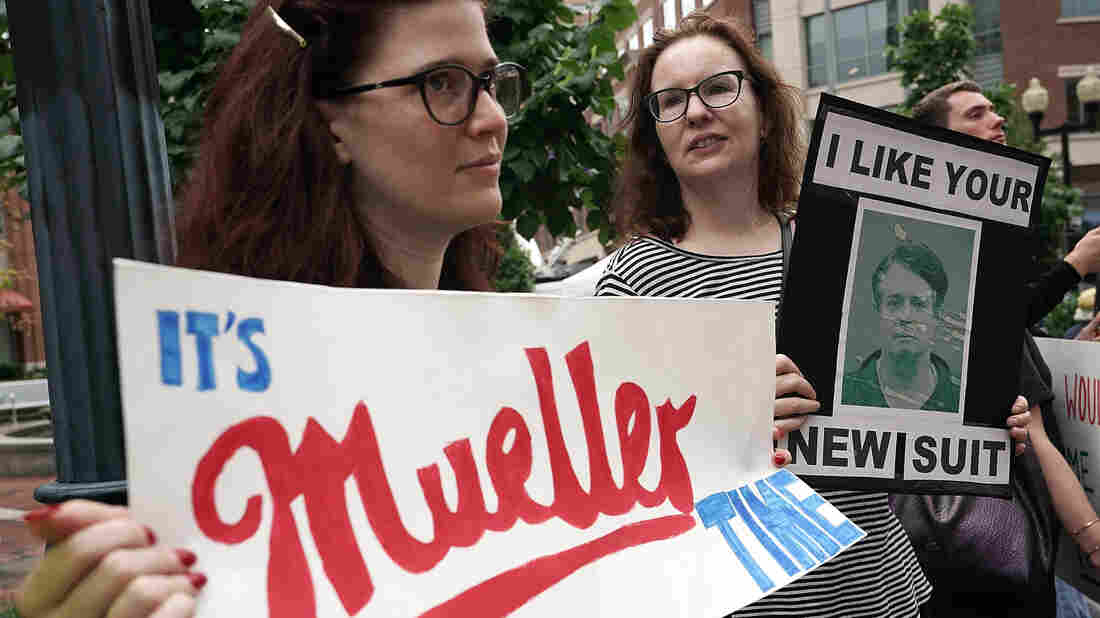 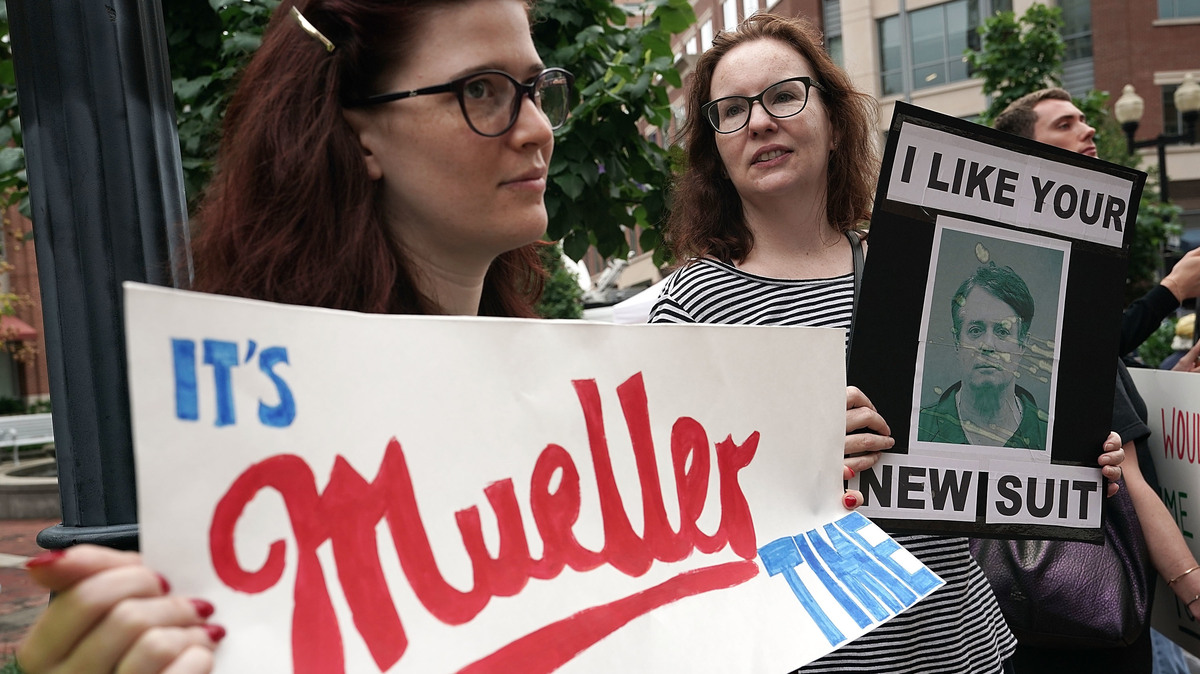 The trial's opening day, on Tuesday, was a blur: The jury was seated, both sides presented their opening statements and the government's first witness took the stand.

Judge T.S. Ellis III said before the trial began that he wanted the proceedings to wrap in three weeks or less, and Tuesday's proceedings lived up to the Alexandria, Va., courthouse's reputation as a "rocket docket."

Manafort's trial on bank and tax fraud charges is the first to stem from Mueller's investigation.

In its opening statement Tuesday, the government portrayed Manafort as a man who led a lavish lifestyle and held a disregard for American financial law.

Assistant U.S. Attorney Uzo Asonye said Manafort made tens of millions of dollars as a political consultant in Ukraine but used offshore shell companies and foreign bank accounts to avoid paying U.S. taxes on much of the money.

Manafort used the money he allegedly shielded from authorities to buy multi-million-dollar properties, antique rugs and luxury cars, Asonye said. In one case, Manafort even purchased a $15,000 jacket "made from an ostrich."

Asonye said Manafort didn't just lie to the Internal Revenue Service, he also lied to his own bookkeepers to avoid paying taxes and to banks in an effort to qualify for loans he wouldn't otherwise have been approved for.

"All of this was willful," Asonye said. "Paul Manafort knew about the law."

Defense attorney Thomas Zehnle focused much of his opening statement on the question of trust, particularly the trust that Manafort placed in his former right-hand man, Rick Gates.

Gates and Manafort worked closely together for years, including in Ukraine.

Gates was indicted the same time as Manafort and initially fought the charges. But he pleaded guilty in February and has been cooperating with the special counsel's office. He is expected to be the government's star witness.

He said Gates took advantage of his position overseeing day-to-day operations of Manafort's consulting firm. He accused him of embezzling millions of dollars and manipulating transactions to "line his own pockets."

Gates' guilty plea, in Zehnle's telling, is nothing more than an attempt by Gates to save his own skin.

The government's first witness on Tuesday was Tad Devine, a political consultant who has done work for the presidential campaigns of Bernie Sanders and Democratic nominees Al Gore and John Kerry. Devine also worked closely with Manafort on consulting work in Ukraine.

Under government questioning, Devine described Manafort as very much the hands-on boss in their Ukraine work, testifying that "Paul was in charge" of business operations.

Under cross-examination, Devine also portrayed Manafort as a skilled political operator and a hard worker.

"It was a tremendous amount of work, and I have to say, Paul worked harder than anyone," Devine said. "There were emails sometimes throughout the night."

In releasing the jurors on Tuesday, Ellis warned them against watching the news or talking to family about the case, even though there was sure to be "intense curiosity" about it. He also told them not to read, watch or listen to any news reports about the trial.

He urged them, in closing, to "keep an open mind."

An earlier version of this story incorrectly called Sen. Bernie Sanders a Democrat. Although he caucuses with the Democrats and did run for the Democratic presidential nomination, he is an independent.