Accessibility links
DeVos Family Money Is All Over The News Right Now Family separation, the Supreme Court on public-sector unions, the Kavanaugh nomination: All are linked, through donations, to the billionaire family of the education secretary.

DeVos Family Money Is All Over The News Right Now

DeVos Family Money Is All Over The News Right Now 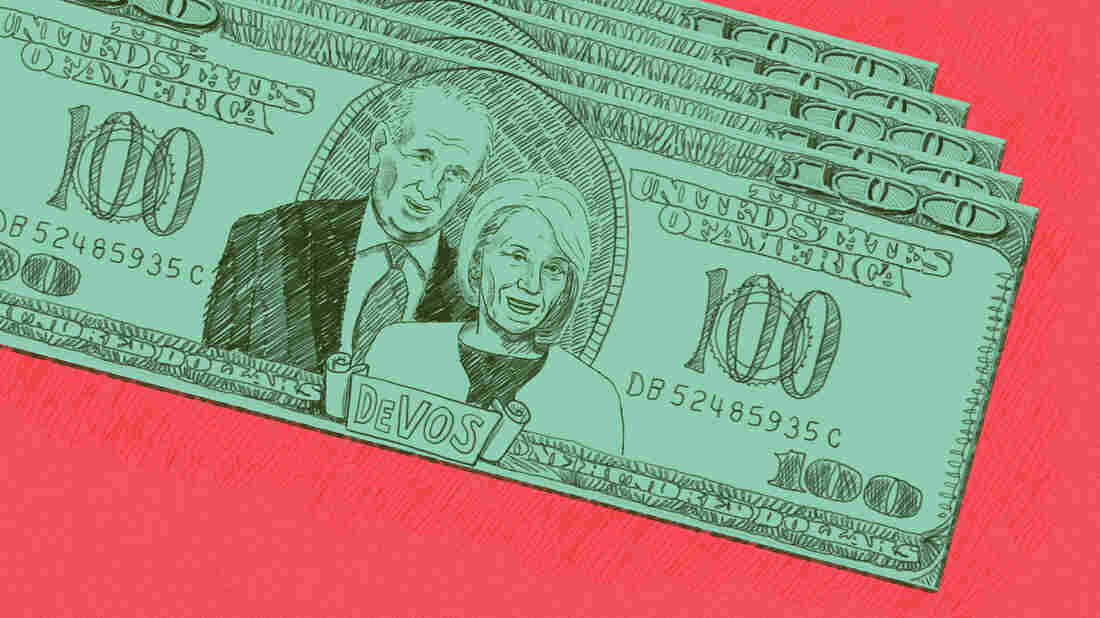 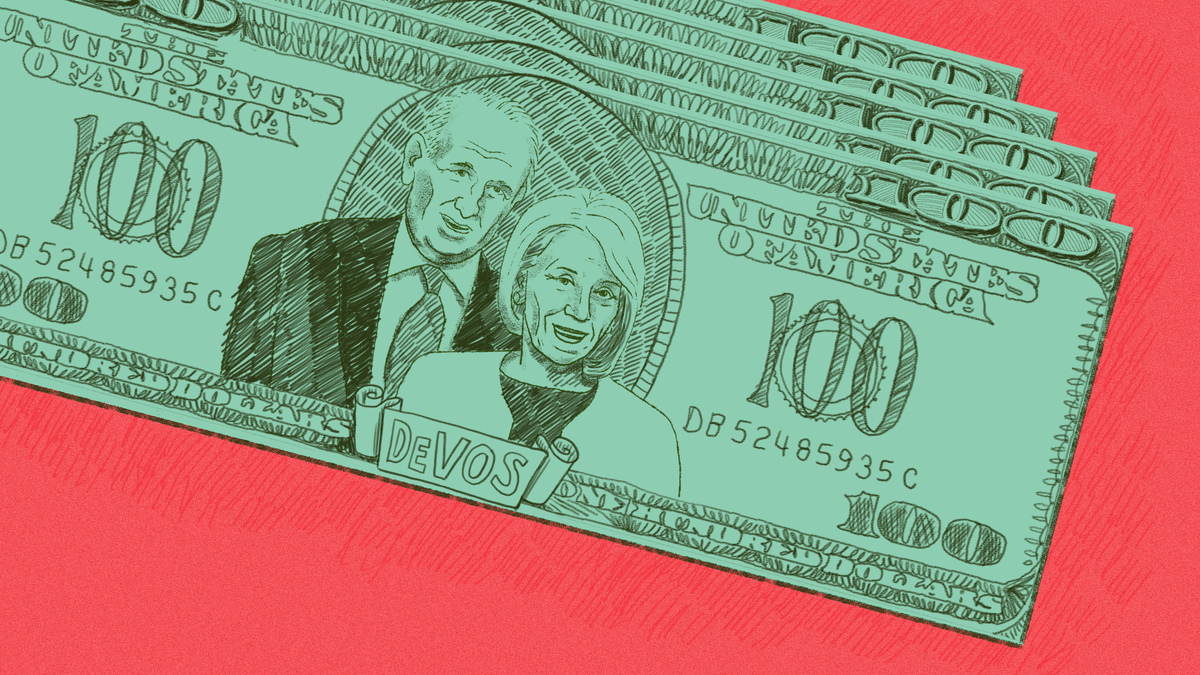 From the policy of separating immigrant families, to limiting the power of labor unions, to naming the next justice of the U.S. Supreme Court, this summer the DeVos family name has been all over the news.

Over the years, the parents, in-laws and husband of U.S. Education Secretary Betsy DeVos have given hundreds of millions of dollars to conservative causes. And many of those causes are front and center of policy initiatives and goals of the Trump administration right now.

Those foundations include the Dick and Betsy DeVos Family Foundation (founded by the education secretary and her husband); the DeVos Urban Leadership Initiative (formerly the Richard and Helen DeVos Foundation), founded by Betsy DeVos' in-laws; and the Edgar and Elsa Prince Foundation, founded by her parents.

Betsy and Dick DeVos support free-market conservative organizations "because of their mainstream, common commitment to freedom, the most universal civil liberty," said Greg McNeilly of the Windquest investment group, one of the family's for-profit financial holdings, in response to inquiries about Betsy DeVos' giving. "This commitment to protecting and promoting freedom is an animating core of their worldview."

And, he added, the family supports humanitarian organizations, because "helping the poor and disadvantaged is a driving principle of their worldview and it's reflected in the history of their foundation."

Betsy DeVos oversaw some of this giving personally, as a member of the board of directors of the Dick and Betsy DeVos Family Foundation since 1989. In a disclosure form prior to her confirmation as education secretary, DeVos reported resigning her position at the foundation as of December 2016.

During her confirmation hearing, DeVos denied making decisions for the Edgar and Elsa Prince Foundation, which is on record giving to many anti-LGBT groups, despite being listed as a board member for 17 years; she said this was a clerical error.

"I think what we see overall is really the purchasing of political power that crosses the spectrum of political and foundation giving," he said. "The right is very quick to use foundation funding in a way that the left does not in supporting specific policies."

Here's a rundown of recent events with DeVos money connections.

The Janus decision and teachers unions

The story: The Supreme Court found at the end of last term in Janus v. AFSCME that public-sector unions cannot collect money, known as agency fees, from nonmembers who are covered by collective bargaining agreements. That ruling could open the path to a big drop in membership of these unions, including teachers unions.

The organization: My Pay, My Say, a project of the Michigan-based Mackinac Center for Public Policy, is a national campaign to encourage public-sector union members to "Keep your hard-earned money" and opt out of the union. The Mackinac Center describes itself as a state-based, free-market think tank. It backs issues such as school vouchers and criminal justice reform. The center did not respond to requests for comment.

The DeVos connection: The Dick and Betsy DeVos Family Foundation and the DeVos Urban Leadership Initiative are top donors to the Mackinac Center. They gave hundreds of thousands of dollars between 1998 and 2016.

The story: The Trump administration's "zero tolerance policy" caused about 3,000 children to be separated from their families as they crossed the border into the United States.

The organization: Bethany Christian Services, one of the largest adoption agencies in the country, took temporary custody of some of these children. The organization says it supports family reunification; it reports in a FAQ that more than one-third of the children have now been reunited with their families.

The DeVos connection: Brian DeVos, a cousin of Betsy DeVos' husband, Dick, was the senior vice president for child and family services at Bethany until earlier this year, the organization reports. Maria DeVos — married to Dick DeVos' brother, Doug — has served on Bethany's board. The DeVos family foundations gave more than $6 million to Bethany between 1998 and 2016, with most of it coming from Richard and Helen DeVos.

Responding to scrutiny of the DeVos connection, Bethany Christian Services stated in its FAQ: "Betsy DeVos and the DeVos Family Foundation have been generous supporters of Bethany Christian Services long before Betsy became the Secretary of Education and we are forever grateful for their continued support. While we are extremely grateful to our thousands of donors and supporters from across the country, the idea that any single individual or organization could cause us to change practices is simply false and diminishes the incredible work of all those firmly focused on the well-being of displaced children."

The story: Anti-abortion "crisis pregnancy centers" offer counseling and sometimes basic care such as sonograms to pregnant women in an attempt to dissuade them from an abortion. A California law required all licensed health care centers to offer information about reproductive health care available in the state, and required unlicensed centers to explain that they were unlicensed. The Supreme Court found last term that these requirements violate the First Amendment.

The DeVos connection: DeVos family foundations have also supported other crisis pregnancy centers in the their home state of Michigan.

The story: In the case Masterpiece Cakeshop, Ltd. v. Colorado Civil Rights Commission, the Supreme Court found in June that a baker could decline to make a cake for a same-sex wedding because of his religious beliefs.

The DeVos connection: The Richard and Helen DeVos Foundation has donated to Alliance Defending Freedom since at least 1998 and (under its current name, the DeVos Urban Leadership Initiative) as recently as 2016, totaling hundreds of thousands of dollars. The Edgar and Elsa Prince Foundation, founded by DeVos' parents, has given at least $1 million to the organization, according to ProPublica.

The story: President Trump's second choice for the high court, like his first, Neil Gorsuch, came from a short list of judges selected by a group of conservative lawyers called the Federalist Society.

The organization: The Federalist Society says it consists of 60,000 lawyers, law students and scholars with a conservative or libertarian worldview "dedicated to reforming the current legal order" in favor of freedom and against "liberal orthodoxy." Leonard Leo, former executive vice president of the organization, took leave from his position to personally assist Trump in picking a successor to Anthony Kennedy.

The DeVos connection: The DeVos Urban Leadership Initiative (formerly the Richard and Helen DeVos Foundation) has been a top contributor to the Federalist Society, donating $25,000 in 2016 and hundreds of thousands of dollars over the years. The Dick and Betsy DeVos Family Foundation has given as well.

NPR looked at tax records analyzed by the nonpartisan Michigan Campaign Finance Network, for 2015 and 2016; and the left-leaning database project Conservative Transparency, which lists donations from 1998 through 2014.

These causes and organizations are representative, not comprehensive — just a small snapshot of these foundations' activities. The DeVos Urban Leadership Initiative gives away about $50 million each year, the Dick and Betsy DeVos Family Foundation about $10 million, and the Edgar & Elsa Prince Foundation about $5 million.