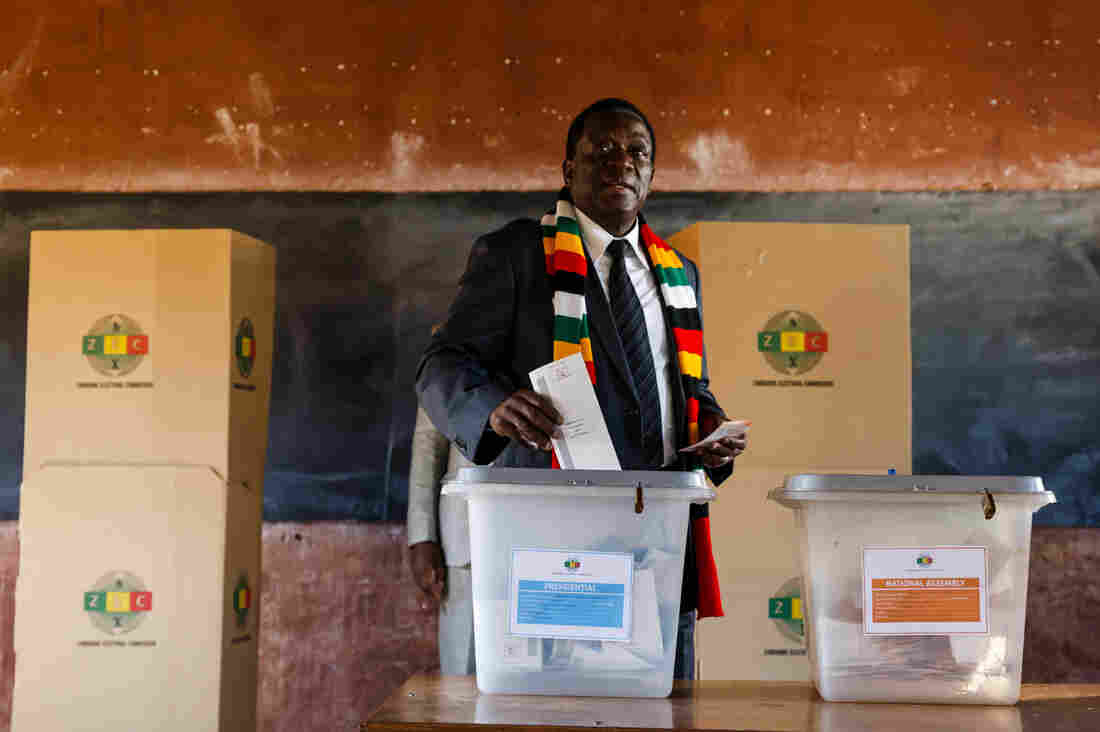 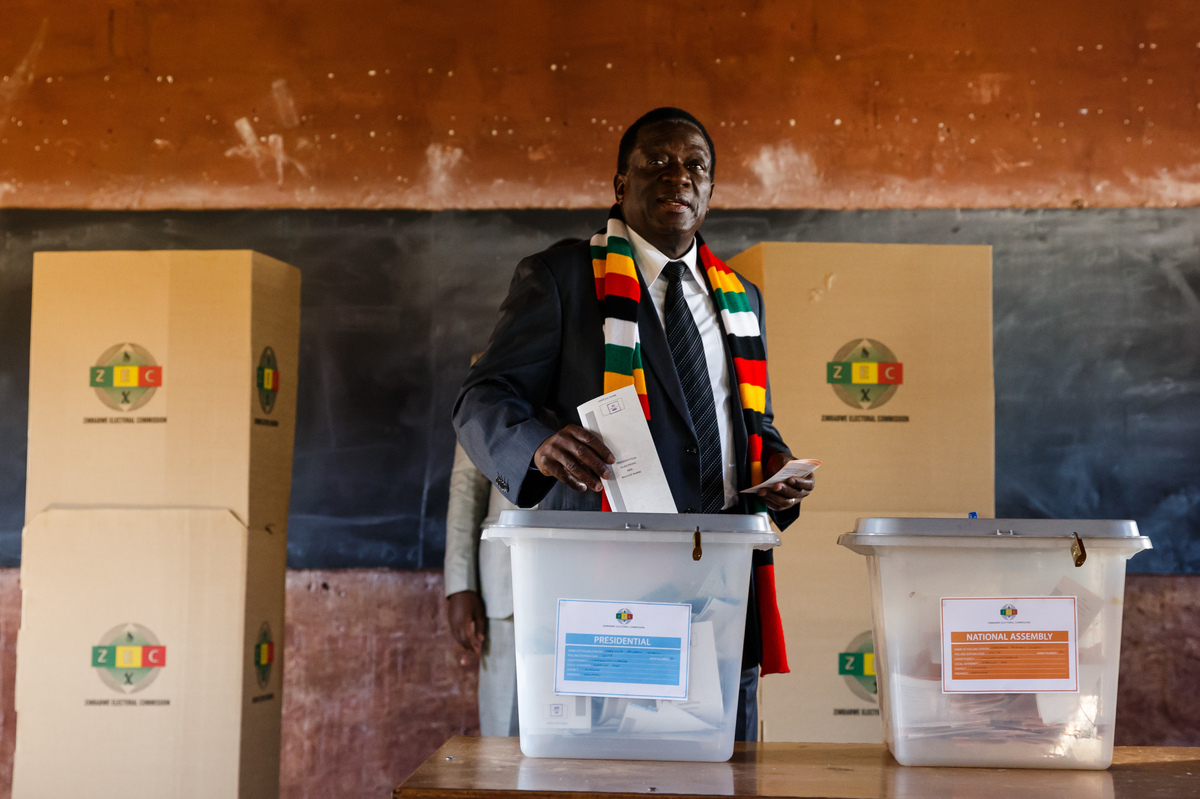 After days of increasingly restive waiting, Zimbabwe has officially elected its president: Emmerson Mnangagwa won the country's first major election since the ouster of longtime strongman Robert Mugabe, according to formal results released by the country's electoral commission. Commissioners announced that he beat a field of some two dozen other candidates, earning 50.8 percent of the vote.

The long-awaited announcement is unlikely to satisfy supporters of Mnangagwa's principal opponent Nelson Chamisa, however.

The 40-year-old leader of the Movement for Democratic Change has alleged widespread electoral fraud. And midway through the news conference announcing the final results, party Chairman Morgan Komichi declared they are rejecting the results — which showed Chamisa getting just over 44 percent — as "fake."

Later, Komichi vowed to challenge the results "through the courts."

By Thursday masked soldiers were patrolling the city's streets, which had emptied and fallen as quiet as a ghost town as the hours ticked down to the commission's announcement. Meanwhile, police also raided the MDC headquarters, arresting 18 people — including several prominent party members — on suspicion of playing roles in the violence of the previous day.

The streets of Harare 1.5 hours before the results of the presidential vote are announced. #zimelections2018 pic.twitter.com/iay9eB9XNV

Amid the tumult, the announcement nevertheless marks an important — if likely inconclusive — milestone in a country that for nearly four decades lived under Mugabe's unrelenting rule. Since the country gained its independence from white minority rule in 1980, the strongman kept his grasp on power with a combination of corruption, violent intimidation and suppression of dissent.

Although the country regularly held elections, the votes in recent decades were widely regarded as thinly veiled shams meant to legitimize Mugabe's authoritarian regime, not reflect the preference of his people. Speaking with NPR's Eyder Peralta, one opposition activist recalled bloody retaliations — from arson to amputation — committed against voters suspected of supporting the opposition in previous elections.

Monday's vote was expected to be a different matter.

Held more than eight months after Mugabe stepped down under pressure from Mnangagwa and the military, the elections offered voters a radically unfamiliar sight: a ballot without Mugabe's name on it. The nonagenarian former leader found himself relegated to the margins, where he has railed against Mnangagwa, his former ally and vice president who now leads his longtime party, the ZANU-PF.

"I cannot vote for those who have tormented me," Mugabe said at a news conference a day before the vote, suggesting he would throw his support behind Chamisa.

For many voters, however, the choice proved less clear. In many ways, the elections presented them with a study in stark contrasts — none more apparent than the one between the front-runners: Mnangagwa, a wily 75-year-old incumbent with a menacing nickname ("the crocodile") and a dubious human rights record, and Chamisa, a lawyer and pastor just over half his age.

The vote pitted Mnangagwa's experience against Chamisa's promises of a new perspective — though both men have vowed to right Zimbabwe's long-flagging economy, which has long been beset by a massive cash shortage, crumbling infrastructure and the country's status as something of an international pariah.

As elections opened, opinion polls showed them locked in a tight race. 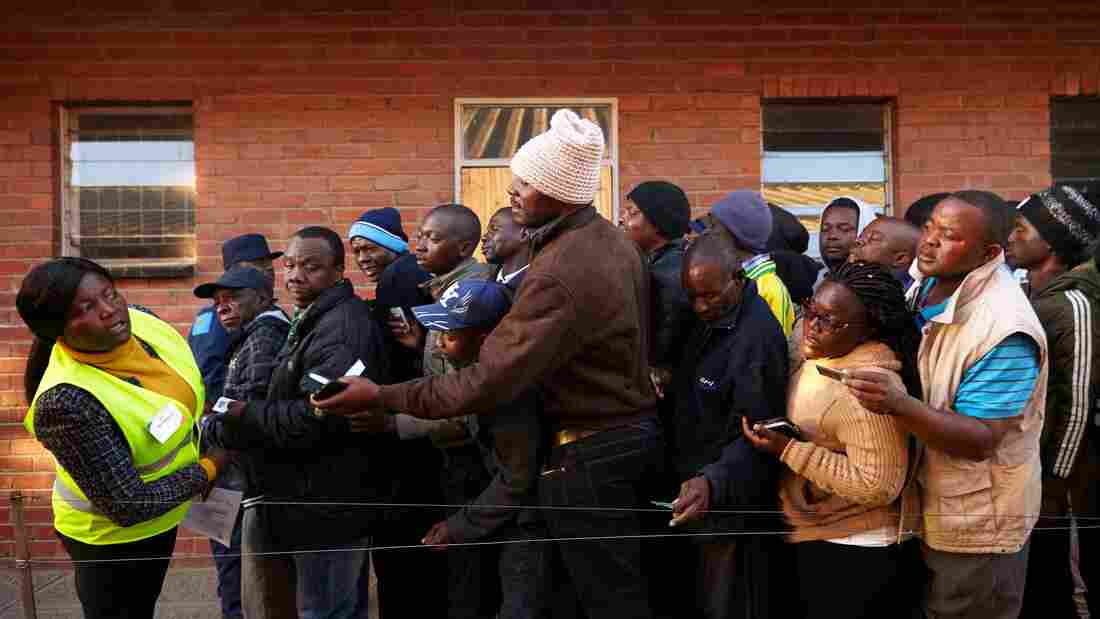 People line up early Monday morning at a polling station in the Harare suburb of Chitungwiza, where they waited to vote in Zimbabwe's first general elections since President Robert Mugabe's ouster. Alex Mcbride/AFP/Getty Images hide caption 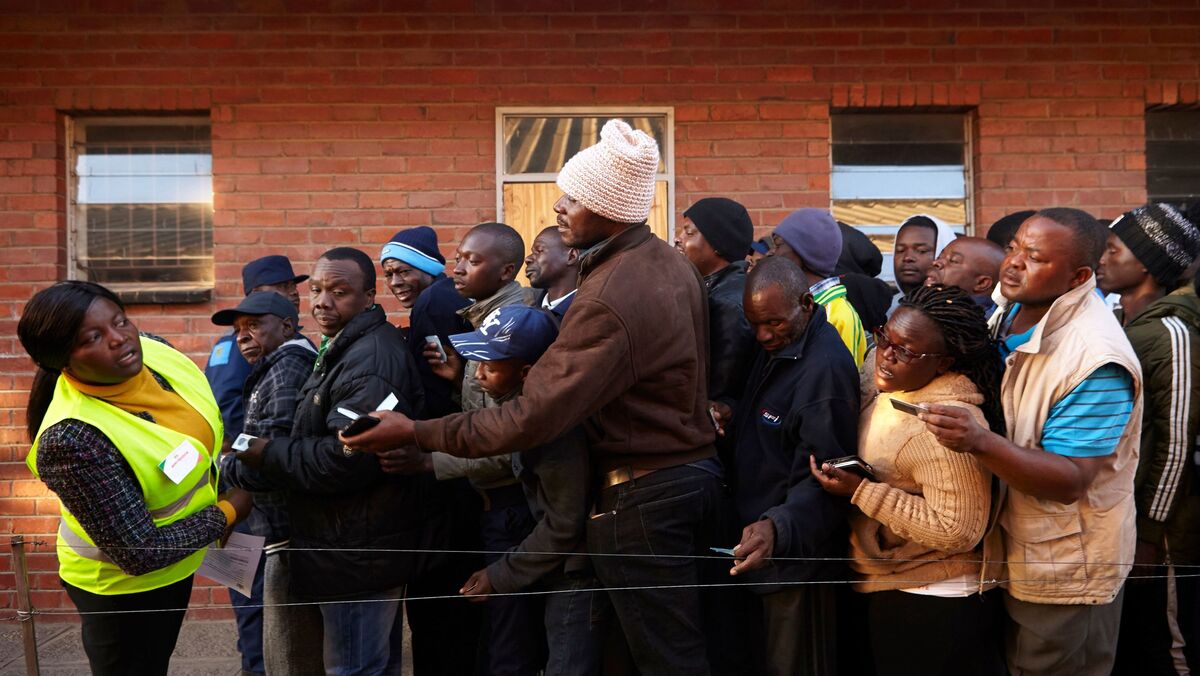 People line up early Monday morning at a polling station in the Harare suburb of Chitungwiza, where they waited to vote in Zimbabwe's first general elections since President Robert Mugabe's ouster.

Still, in some ways, the options mattered less to voters than the prospect of having any say at all in who wins — a strange and welcome promise, though one that was far from guaranteed. Balanced against the hope for a new democratic era was the fear that it might be derailed by the alleged fraud or violent reprisal that has dogged Zimbabwe's elections for so long.

Displaying confidence in the integrity of the elections before the polls opened, authorities invited Western monitors for the first time in roughly 16 years. But many of those observers found reasons to be concerned over how the vote has been conducted, including what the European Union team describes as incidents of voter intimidation and a lack of transparency.

And their conclusions will have consequences, ultimately: The U.S. and the E.U. have emphasized that the possibility of sanctions relief and International Monetary Fund support hinges on whether Zimbabwe holds an election deemed "free and fair" by international observers.

Chamisa made clear early on that he suspects foul play has been attempted.

"There seems to be a deliberate attempt to suppress and frustrate the Urban vote," the opposition leader tweeted Monday while voting was still underway. Chamisa warned that the "people's will [is] being negated ... due to these deliberate and unnecessary delays."

Mnangagwa, for his part, survived an apparent assassination attempt unscathed last month. After an explosion tore through his political rally in Bulawayo, killing at least two people, he asserted that "the campaign has been conducted in a free and peaceful environment, and we will not allow this cowardly act to get in our way as we move towards elections."

Such rumblings unsettled some voters, calling to mind echoes of the violence that marred the past two general elections — but did little to dampen their determination on Monday. Voter turnout appeared impressive, with nearly three-quarters of registered voters casting ballots.

"We are brave because we want change," one woman told NPR's Peralta on Monday in Tanganda, noting that she had seen some men trying to intimidate the voters there.

And as they waited anxiously for the ballots to be tabulated, shortly after leaving their voting booths, Zimbwabeans took to social media to rejoice in the simple chance have their say in the elections. Many voters brandished a powerful symbol — not the colors of a chosen party, nor even the colors of the Zimbabwe national flag. Rather, they showed off the dark ink staining a single finger, the indelible mark earned simply by voting.

That optimism dimmed by Thursday, however, as fear became so widespread in Harare it was palpable.

"No one wants to talk on mic, no more names and even my notebook spooks people, who are afraid they will be targeted later on," Peralta observed. "That was not the case on Monday."

Mnangagwa and the military "are showing their true colors now," newspaper vendor Farai Dzengera told Reuters. "We thought they were our savior in November but they fooled us. What can we do. ... They run this country."

That's not how Mnangagwa himself sees it. In a statement, he struck a hopeful tone.

"Though we may have been divided at the polls, we are united in our dreams," he tweeted shortly after results were announced. "This is a new beginning. Let us join hands, in peace, unity & love, & together build a new Zimbabwe for all!"

I am humbled to be elected President of the Second Republic of Zimbabwe.

Though we may have been divided at the polls, we are united in our dreams.

This is a new beginning. Let us join hands, in peace, unity & love, & together build a new Zimbabwe for all! pic.twitter.com/FbdrixAktR