Accessibility links
'The Incendiaries' Is A Poignant And Powerful Look At Campus Life R.O. Kwon's new novel explores the attractions — and dangers — of faith, against the overheated, over-the-top backdrop of an upper-crust college somewhere in the Northeastern United States. 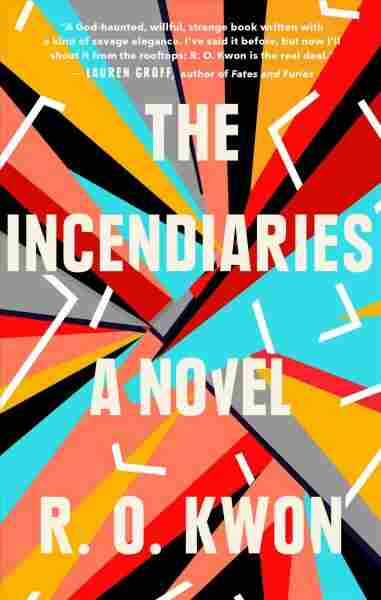 Rivaling Donna Tartt's celebrated debut, A Secret History, in its fevered treatment of American university life, R.O. Kwon's first novel The Incendiaries gives readers a juicy look at campus mores, though sometimes that juice is more bitter than sweet. Hormonal fumblings in the dark halls of post-adolescence can be painfully entertaining and entertainingly painful — I am reminded of what Lena Dunham's middle-aged gynecologist tells her character on Girls, after listening to Hannah's jejune blathering: "You could not pay me enough to be 24 again." Instead, we can rely on intense smarties like Kwon to tell us all about it.

In The Incendiaries, men and women on the cusp of adulthood bring loaded back stories to their couplings and uncouplings, leading inexorably (and a bit predictably) to tragic results. (Not a spoiler; the author spoils it for us on the second page, writing, "Buildings fell. People died.")

Phoebe Haejin Lin's unhappy past is at odds with her high-rolling life at a fictional school called Edwards, somewhere in the northeastern United States. She has become the campus It Girl, the ravishing one everyone wants to sleep with, wants to be. While others see only surface perfection — her long, glossy black hair, flawless skin and exquisite features — we get the real story in the character's first-person confessionals. The death of her mother in a car accident haunts her; an inexperienced Phoebe was at the wheel and her mom threw her body across that of her daughter to protect her. Another, more minor, secret: Phoebe was a piano prodigy until she abruptly quit, realizing she could never measure up to the masters. The failure dogs her.

Working-class Will Kendall knows nothing of Phoebe's troubled background — and he has secrets of his own. A fish out of water at Edwards, Will tells lies about the seedy town he's from in Southern California, trying to fit by layering colored polo shirts he cannot afford. He also hides a bumpy evangelical past, when as a teenager he found Christ and traveled to Beijing as a missionary. His confessions about losing his religion represent some of the most compelling parts of the story, as he describes "how cut open I felt since then, with a God-shaped hole I didn't know how to fill." Will's destitute, mentally ill mother relies on the paltry sums he sends home, earned by waiting tables at a local eatery — and at the Ivy League-styled Edwards, such part-time jobs are most definitely not part of the social equation.

A month into their first semester, Will and Phoebe meet cute at a party. She spills a drink down his pants, then holds him mesmerized, dancing in front of him with sinuous raised arms. Their affair takes off like a Roman candle. Will's extreme, amour fou infatuation with Phoebe is akin to David's for Jade in Scott Spencer's raw classic, Endless Love. In Kwon's telling, the school is an overheated, over-the-top place: At one party the birthday boy rents a pair of caged lions, with Phoebe passing off the novelty as no big deal. The text gets at the cloistered atmosphere of an elite school, where all events, no matter how trivial, are somehow meaningful, and the microcosmic is sometimes mistaken for the cosmic.

'The Incendiaries' finds its greatest depth in the conflation of politics and faith.

The Incendiaries finds its greatest depth in the conflation of politics and faith. A Christian cult leader named John Leal enters the stage from the extreme right. A Edwards dropout who suffered imprisonment in a North Korean gulag when doing refugee work, Leal resolves never again to wear shoes after his experience. Yes, his feet have "filth, a half-inch of skin stained black at his soles, the heels split, flaking," but his followers in the radical anti-choice group Jejah don't mind. John Leal is the wedge that drives the two lovers apart, and his hold over Will's precious Phoebe leads to The Incendaries' stunning conclusion.

Readers will feel the pain when Phoebe deserts Will and the poor besotted boy crumbles. Some of Kwon's language delivers meaningful aperçus, while some passages simply try too hard. "Pink meat bled when I cut it open, the charred bits crunching like minute bones. A torn roll steamed; butter liquified. Oil dripped, gilding white porcelain." Capturing the intensity of the groves of academe might require this kind of elevated puffery, but at times the meat is hard to stomach. Still, Kwon delivers a poignant and powerful look into the millenial mindset. It can be rocky, but it can also rock.