Accessibility links
4 Cities' Lawsuit Calls Trump Efforts To Undermine Obamacare Unconstitutional The complaint, filed Thursday, alleges the Trump administration is "waging a relentless campaign to sabotage and, ultimately, to nullify the law." They say that violates the Constitution. 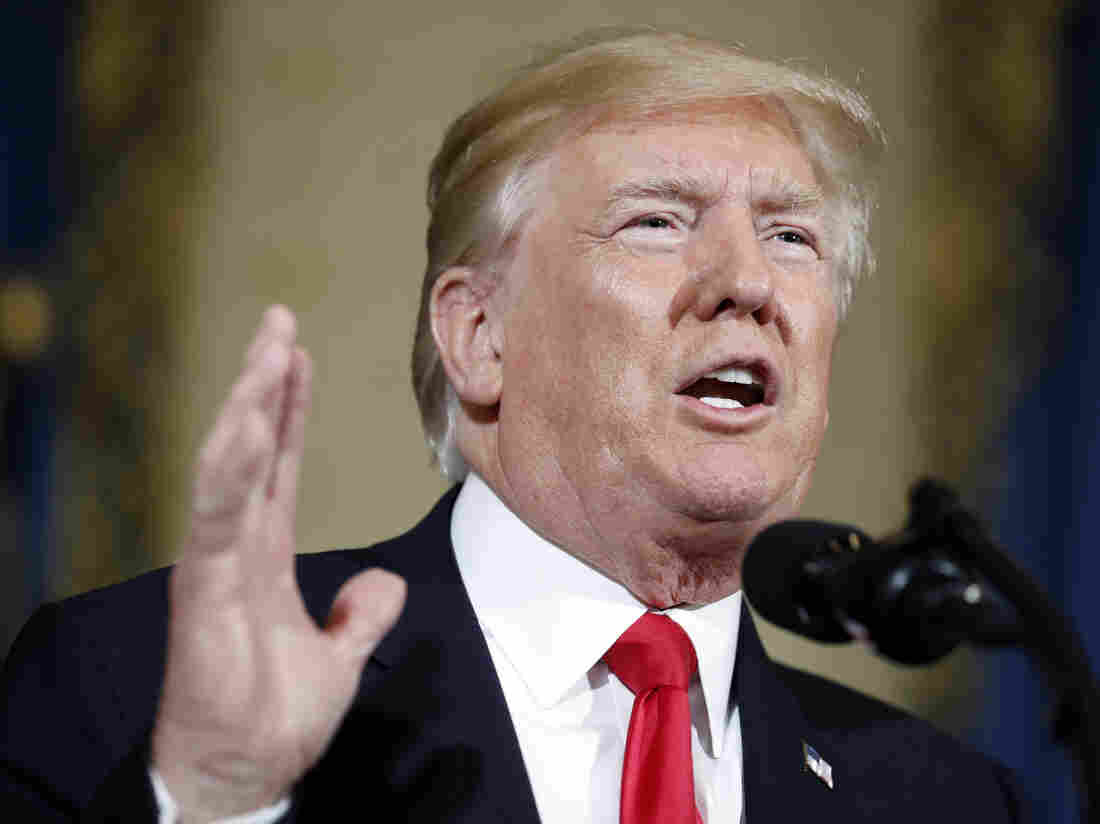 President Trump, pictured in July 2017. Four cities are suing Trump and his administration for allegedly undermining the Affordable Care Act in violation of the Constitution. Alex Brandon/AP hide caption 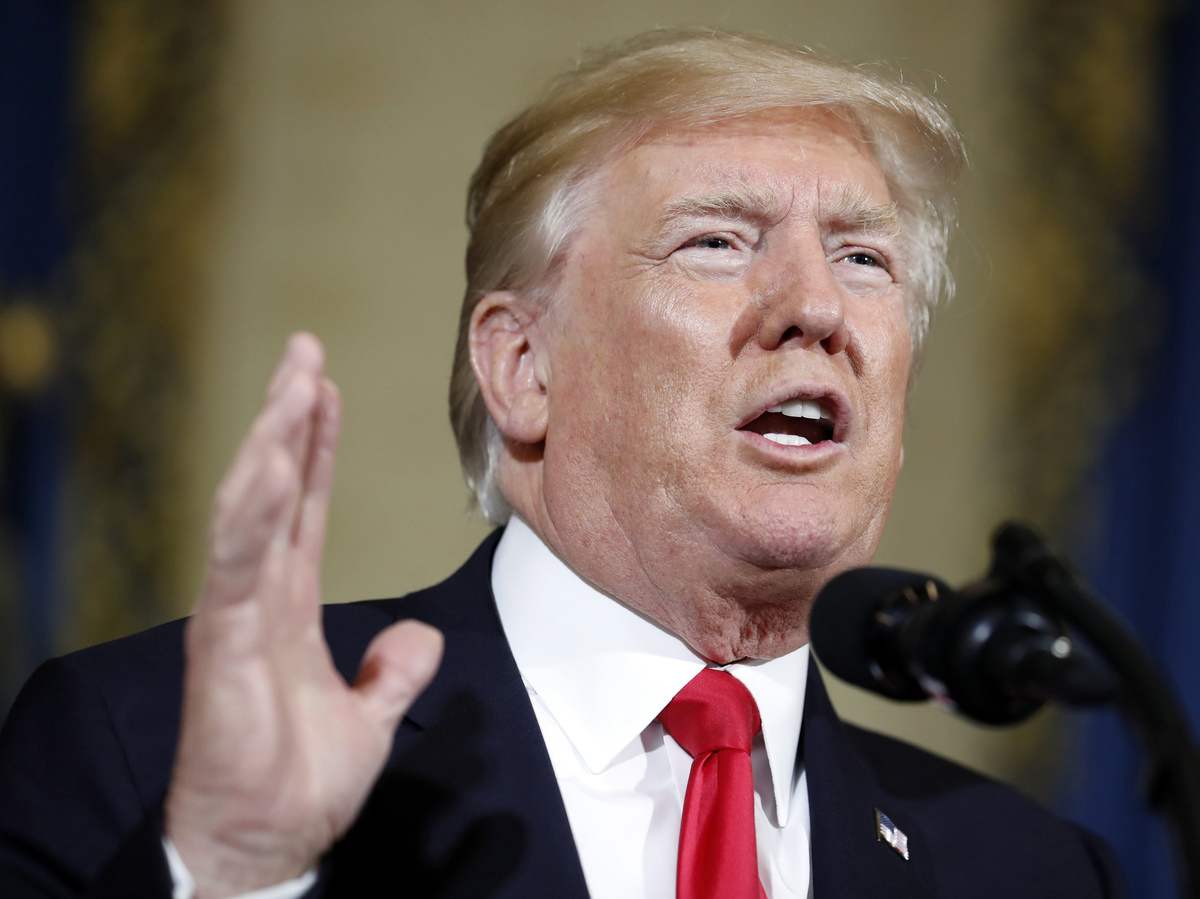 President Trump, pictured in July 2017. Four cities are suing Trump and his administration for allegedly undermining the Affordable Care Act in violation of the Constitution.

President Trump has consistently declared that the Affordable Care Act — commonly referred to as Obamacare — is a broken mess, and after several unsuccessful attempts to repeal the national health care law, he has eagerly anticipated that it will "fail" and "implode."

On Thursday, four cities wielded the president's remarks against him, in a lawsuit accusing Trump of deliberately undermining his executive obligation to "faithfully execute" the law in violation of the Constitution.

It alleges that Trump and his administration "are waging a relentless campaign to sabotage and, ultimately, to nullify the law." It points to the president's own statements and actions taken by the Health and Human Services Department to discourage citizens from enrolling in health insurance exchanges.

The cities of Baltimore, Chicago, Cincinnati and Columbus, Ohio, contend the government has schemed to destroy the ACA by slashing outreach funding, promoting insurance that does not have to comply with the law and can refuse people who have preexisting conditions, has narrowed the enrollment window, imposed onerous documentation requirements and "misused federal funds for advertising campaigns aimed at smearing the ACA and its exchanges, and spinning false narratives about the efficacy and success of the Act."

An HHS spokeswoman told NPR the department does not comment on pending litigation, but in an interview on Fox News on Thursday, Secretary Alex Azar asserted the insurance law "is still broken."

"It does not work because of its own structure," Azar said. "The premium baseline from which they're operating is entirely too high and unaffordable for so many people, but under President Trump we've brought stabilization there that at least is bringing some relief to individuals."

The cities' lawsuit follows Wednesday's changes in regulations that allow insurance-seekers to buy short-term policies for up to three years. The alternative plans may be much cheaper than those offered under the ACA because they're not required to cover as many medical services and can exclude people with pre-existing conditions.

"The plans have been a priority of President Trump, who says he wants consumers to have access to cheaper health insurance.

"Short-term plans don't have to meet the Affordable Care Act's consumer protection and coverage requirements, so many will not cover services such as mental health care or prescription drugs. And insurance companies can deny customers coverage on these plans if they have a pre-existing medical condition and charge people more if they are likely to need medical care."

These policies are aimed at people who earn too much to qualify for federally subsidized health plans, a population HHS estimates will likely be about 200,000 people next year but could grow up to 1.6 million by 2024, according to Kodjak.

What To Watch For As Trump Takes Aim At ACA Protections

Meanwhile, the Congressional Budget Office, the nonpartisan research office that estimates the budget effects of policy proposals, expects a larger swath of healthy people — about 2 million — will buy the less expensive plans. That would likely drive up premiums for those on other plans.

The complaint argued the administration's efforts to promote "bare-bones" plans to weaken the exchanges have "violated their constitutional obligation to take care that the ACA is faithfully executed."

"By actively and avowedly wielding executive authority to sabotage the ACA, defendants are not acting in good faith; instead, they have usurped Congress's lawmaking function, and they are violating the Constitution," the complaint said.

Andy Slavitt, former acting administrator for the Centers for Medicare and Medicaid Services under former President Obama, said insurers have pulled out of the marketplace as a result of the Trump administration's refusal to guarantee monthly subsidy payments.

"There is a specific psychology to the private market. And when you mess with that, as the president has done repeatedly by saying he finally killed Obamacare, that throws the whole thing off," Slavitt told NPR.

Whether or not Trump supports the health care act, he is bound to uphold it, he said. "When I was in the [Obama] administration no one asked me if some law passed by Gerald Ford or Lyndon Johnson or Richard Nixon, was something I wanted to enforce. I was told to make it work for the American public."