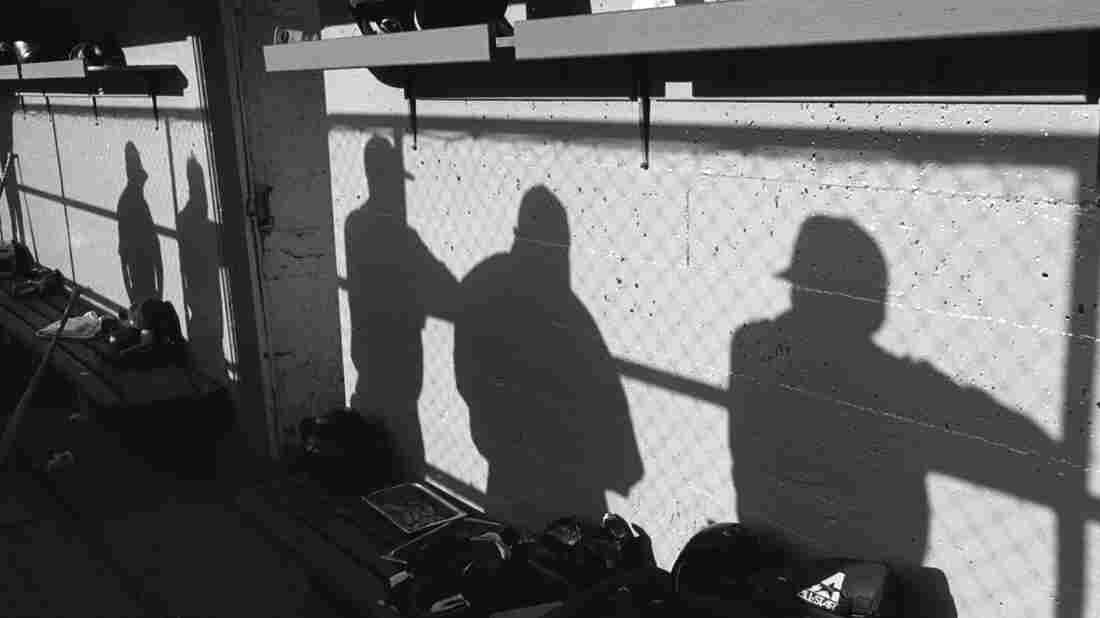 Players from a Single-A minor league team in the West cast shadows across the dugout. The players here chase dreams of making it to the major leagues, but they are paid far less than their major league counterparts. Christopher Morris /Corbis via Getty Images hide caption 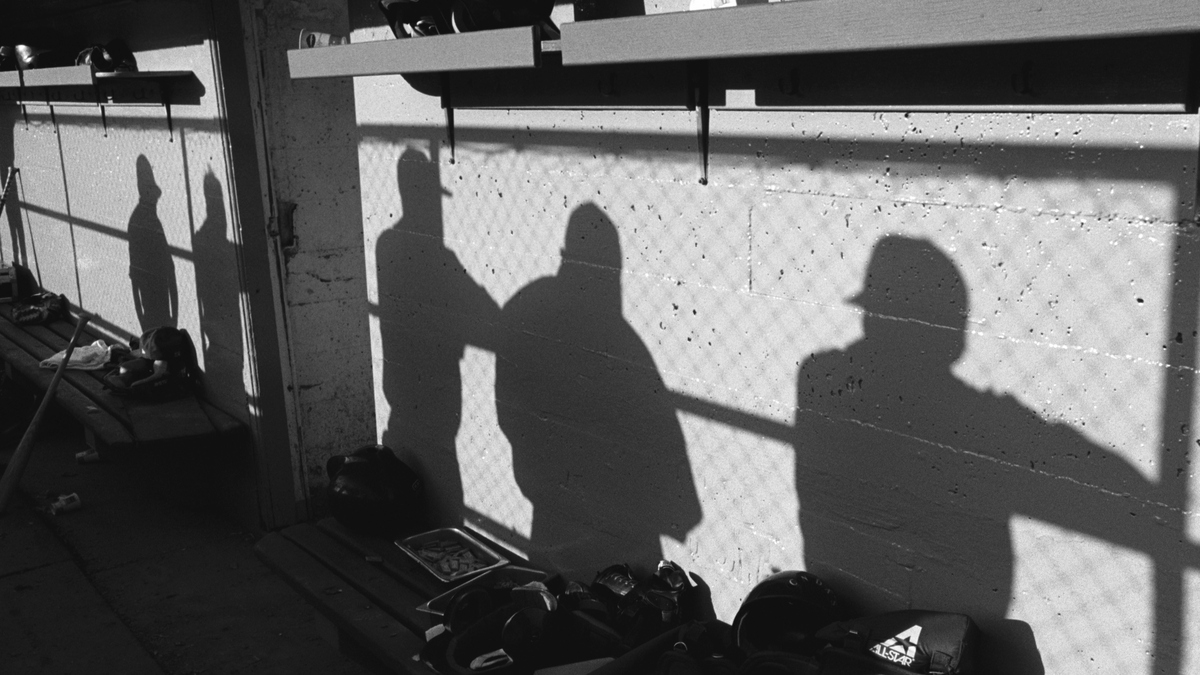 Players from a Single-A minor league team in the West cast shadows across the dugout. The players here chase dreams of making it to the major leagues, but they are paid far less than their major league counterparts.

It's been well-documented in recent years that minor league baseball players don't exactly share in the riches of the game. Most minor leaguers make an estimated $7,500 for a year. Major league players average more than $4 million.

A law passed by Congress a few months ago essentially locked in low minor league pay. But that hasn't stopped a small group of people fighting to help those players.

In an era of growing sports activism, creating a new website isn't quite a kneeling-during-the-national-anthem moment. But when former minor league player Jeremy Wolf launched morethanbaseball.org in April, it was an opening salvo in that fight to help minor leaguers.

From his home in San Antonio, Wolf says, "Even minor league umpires have a union and Major League Baseball has its own union. But minor league players are kind of on their own island. I want this [website] to be a kind of backbone. That support."

Wolf wants the website to be informational for baseball fans and a place for minor leaguers to visit and feel that support. He also wants it to be able to take in donations. "We're trying to create a 501(c)(3) with this organization, this website," he says. "To be able to receive money and help these kids get equipment if they don't have an agent; or help these kids buy food after games; or help with student loans or housing. Because a lot of guys are struggling. Sleeping four to five in an apartment and on air mattresses."

Despite the challenges, the 24-year-old Wolf says he loved the minor league life, before he was released by his team last year after he suffered a back injury. "The dream was always to play professionally," he says. That dream came true when he was drafted by the New York Mets in the 31st round of the 2016 baseball draft.

A lot of guys are struggling. Sleeping four to five in an apartment and on air mattresses.

Wolf soon learned the reality of the minors. He made a below minimum wage salary; ate cheap, bad food. The ceiling leaked in his hotel. Wolf was a good-hitting outfielder, as long as there were enough bats. There weren't at his first stop in the minors, in Tennessee.

So Wolf had to barter with teammates. "I went to some of the higher draft picks, who had agents," he says, asking, " 'Hey, can I trade [for] a bat with you? 'And they were like, 'Yeah, what do you have?' And I was like, 'I have batting gloves. I'll trade you batting gloves for a bat. I'll trade you some shorts for a bat.' Because I needed a bat to hit."

Stories of doing without are common in the minors. Traditionally players accept it as a price of chasing major league dreams. But then along came Congress, in March, and made "doing without" law. Buried on page 1,967 of the $1.3 trillion spending bill, the Save America's Pastime Act exempted Major League Baseball from federal wage and overtime rules. MLB reportedly paid millions lobbying for the act, which formalized what has been status quo — no overtime pay; no pay during spring training and the off-season.

Major League Baseball's rationale is that minor leaguers are seasonal workers. Minor leaguers insist they are professional athletes who work year-round on their craft and many hours of overtime during the season.

So Wolf said, "Enough." And he is getting help from others, including longtime union activist Bill Fletcher. "The situation facing minor leaguers will not be resolved through litigation and it won't be resolved through legislation," says Fletcher, who once served as assistant to the president for the national AFL-CIO. "It's going to be solved through organization."

But organizing minor league players who don't have a union is much easier said than done. They may grumble among themselves about pay and conditions. But they know speaking out publicly about the system could cost them jobs. 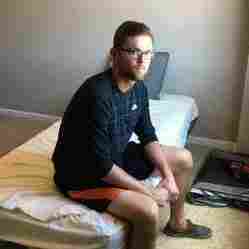 In May, 25-year-old minor league pitcher Jonathan Perrin gave this reporter an impromptu tour of his new, but spare apartment. "So this is kind of it. This is the living room with the only furniture being a twin mattress." Perrin knew it was, in his words, a little bit of a risk when he agreed to let me interview him. At the time he was a relief pitcher for a Triple-A minor league team in Colorado, where he shared the apartment with three teammates. Sitting on that narrow mattress, the 6-foot-4-inch Perrin said living in the apartment sometimes seemed "like you're camping out. Except as a professional baseball player."

Before he got a room, he spent nights in the living room. "If I kind of angled myself a little bit my feet weren't hanging off [the mattress] too much," Perrin said, adding, "It wasn't too bad."

Perrin, now pitching for a Double-A team, is one of the few active players to speak about the pay issue. "I'm not sitting here saying everybody [in the minors] should get 50 grand or whatever," Perrin says. He would be satisfied with minimum wage pay for an entire year. "I mean, we know what we signed up for," he says. "Just help give us a chance to continue to develop and not have to be drawn in so many different directions trying to pay our bills during the times when we're not actually playing."

In his three years playing minor league baseball, Perrin has spent his off seasons working in restaurants, substitute teaching — even, ironically, doing some financial advising. "One off-season," he says, "I would wake up at 6 a.m., go throw at 7, do all my arm care stuff, shower, go to work, from 8 to 2, then work out from 2:30 to 4, then go home and eat. Then I'd give pitching lessons from 5 or 6 to 8 p.m. And that was the routine for three, four months."

"That's how I would look at it," Perrin says. "It's an investment in your prospects, in your lower-level guys, to eventually create a better big league product."

Perrin says two solutions would help. First, paying minor leaguers year-round. "Just keep the salary structure the same," he says, "but make it a 12-month thing where we can help cover our costs in the off-season, which is the toughest part of it." Or, second, cover housing expenses: "Because those are the two biggest things," Perrin says, "the off-season and both off-season and in-season housing. Those are the biggest expenses and the biggest causes of stress and that's what eats away at most of your paycheck."

"Anytime you see some player standing up that's encouraging for me," says attorney Garrett Broshuis, who has largely been alone in the minor league fight since 2014. That's when he filed a lawsuit against Major League Baseball over the pay issue. The suit still is active, which is why MLB wouldn't comment for this story. Neither would the president of Minor League Baseball, nor would lawmakers who supported or opposed the Save America's Pastime Act.

A spokesman for the Major League Baseball Players Association said in an email that union President Tony Clark, a former major league and minor league player, is "empathetic to the plight of minor leaguers." But ultimately Clark also declined a request for comment. The union and the many major leaguers it represents have not publicly supported the minor leaguers — despite the fact that, like Clark, most major leaguers started in the minors.

It's frustrating for Broshuis and Wolf and the few others speaking out. But Wolf still is hopeful. He says several labor unions have shown interest in his efforts. He spoke recently with the Professional Hockey Players Association — the union representing minor league hockey players. "We're full steam ahead with organizing," Wolf says, "and we have their full support.

Wolf says his website, morethanbaseball.org, gets traffic. About 1,000 visits, which Wolf says is "a thousand more people than we [had before]." Wolf stresses that the website's message isn't based on anger. "It's about speaking out to make things better," he says. He and the others involved in the effort are trying to speak out whenever they can.

Hoping, perhaps, to start a movement.