Accessibility links
Strong Quake Hits Indonesia's Lombok Island; Dozens Dead At least 91 people are dead after a 6.9-magnitude earthquake struck the northern part of the island on Sunday. It's the second powerful quake in a week to hit the region. 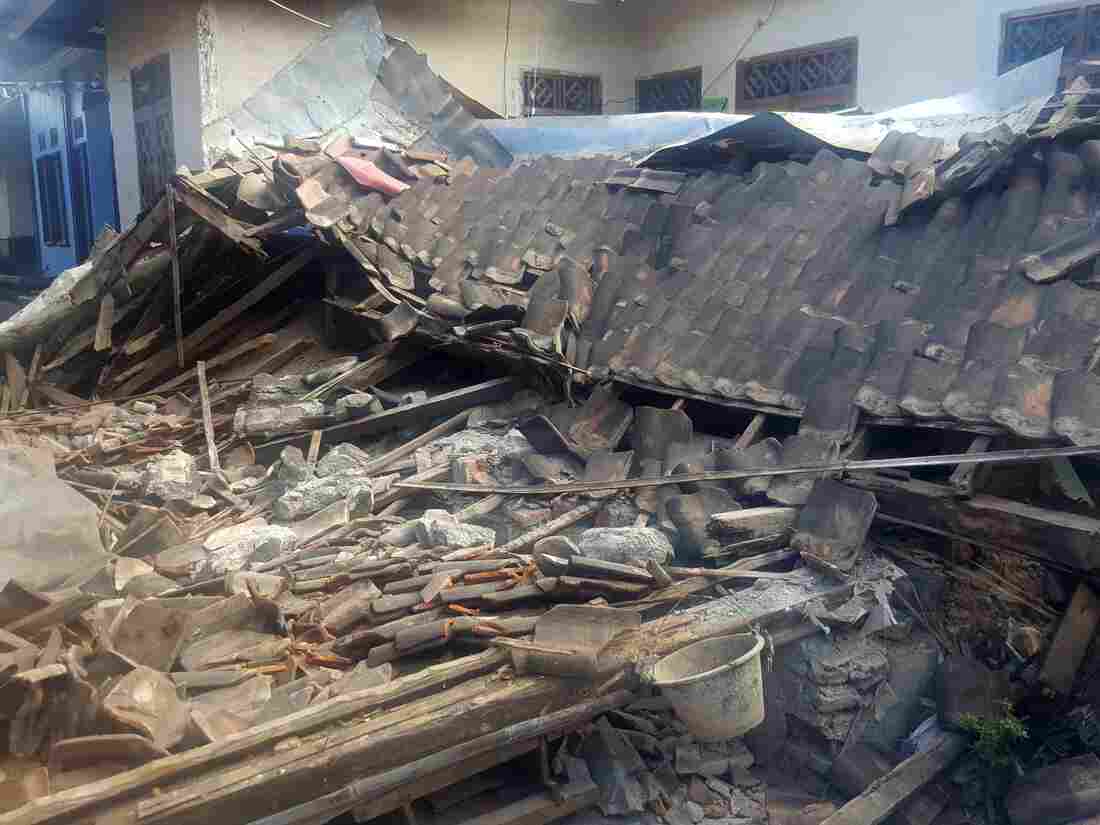 A collapsed home is seen in Batuyang village in Lombok on Monday, a day after a 6.9 magnitude earthquake struck the area. Gin Sugi/AFP/Getty Images hide caption 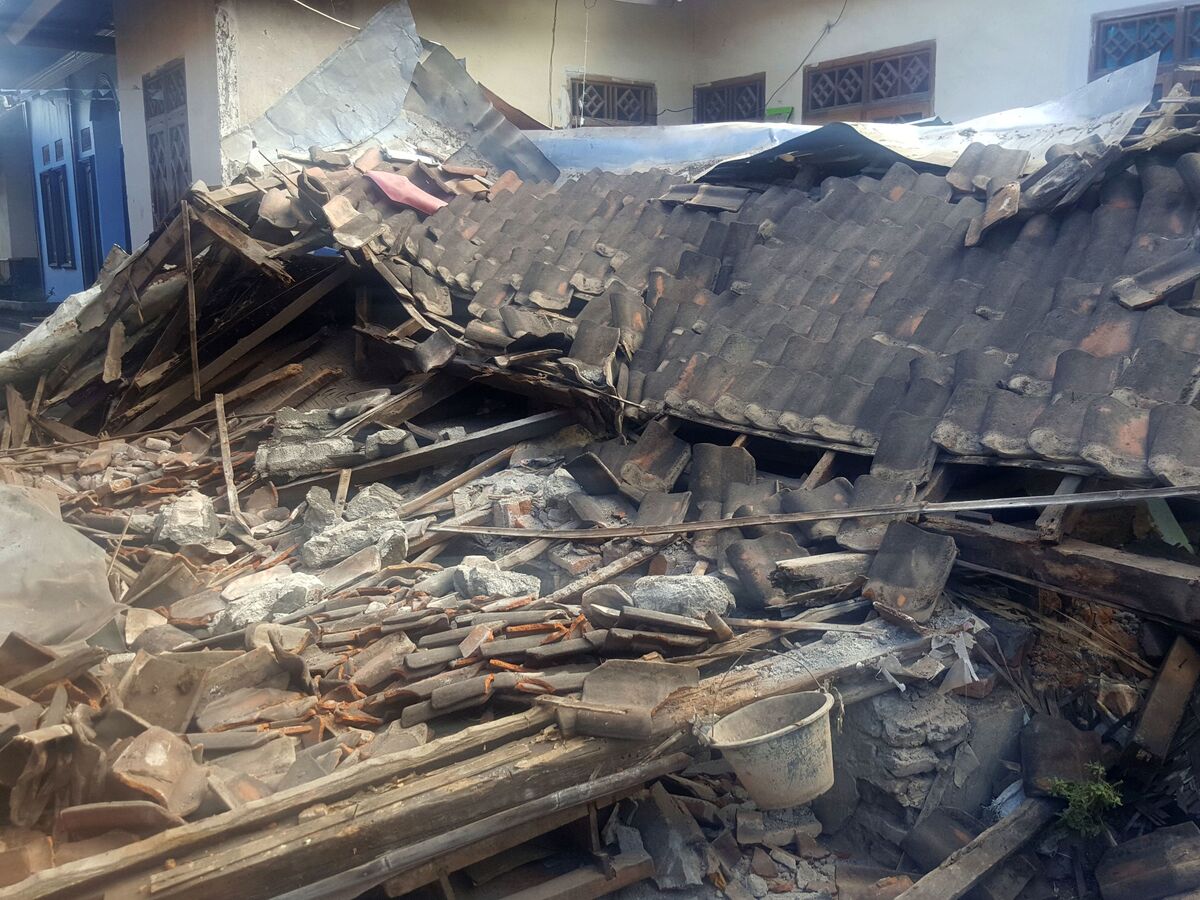 A collapsed home is seen in Batuyang village in Lombok on Monday, a day after a 6.9 magnitude earthquake struck the area.

At least 91 people are dead after a major 6.9-magnitude earthquake struck the Indonesian island of Lombok on Sunday, jolting nearby Bali. It was the second deadly quake in a week to hit the major tourist destinations.

The quake, with its epicenter in northern Lombok, wrecked buildings more than 120 miles away in the neighboring island of Bali, knocking out electricity in several areas and forcing evacuations, according to Indonesia's disaster response agency, Badan Nasional Penanggulangan Bencana (BNPB). A tsunami warning was issued briefly, then rescinded.

The temblor, originally reported as 7.0-magnitude was measured at 6.9 by the U.S. Geological Survey and struck at 7:46 p.m. Sunday evening local time.

In addition to the dead, hundreds of people were injured and thousands of homes damaged, BNPB spokesperson Sutopo Purwo Nugroho said in a statement.

"Most of the victims died from being hit by collapsed buildings," Nugroho says, adding that the death toll would "definitely increase."

At a news conference, he described the damage in northern Lombok as "massive."

He said rescuers had been blocked by debris-strewn roads and collapsed buildings and that some of the worst-hit areas could not immediately be reached. 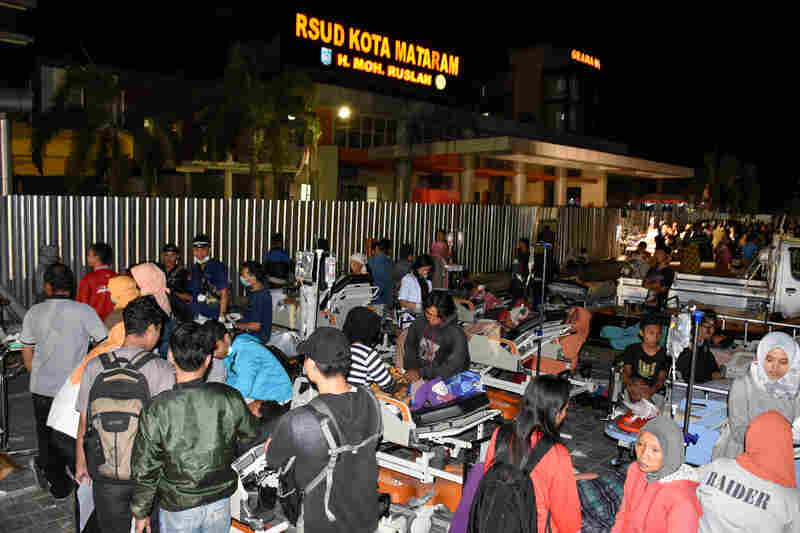 Patients are evacuated outside to the parking lot of Mataram City General Hospital after a strong earthquake is felt in Mataram in eastern Lombok island, Indonesia, on Sunday. Antara Foto Agency/Reuters hide caption 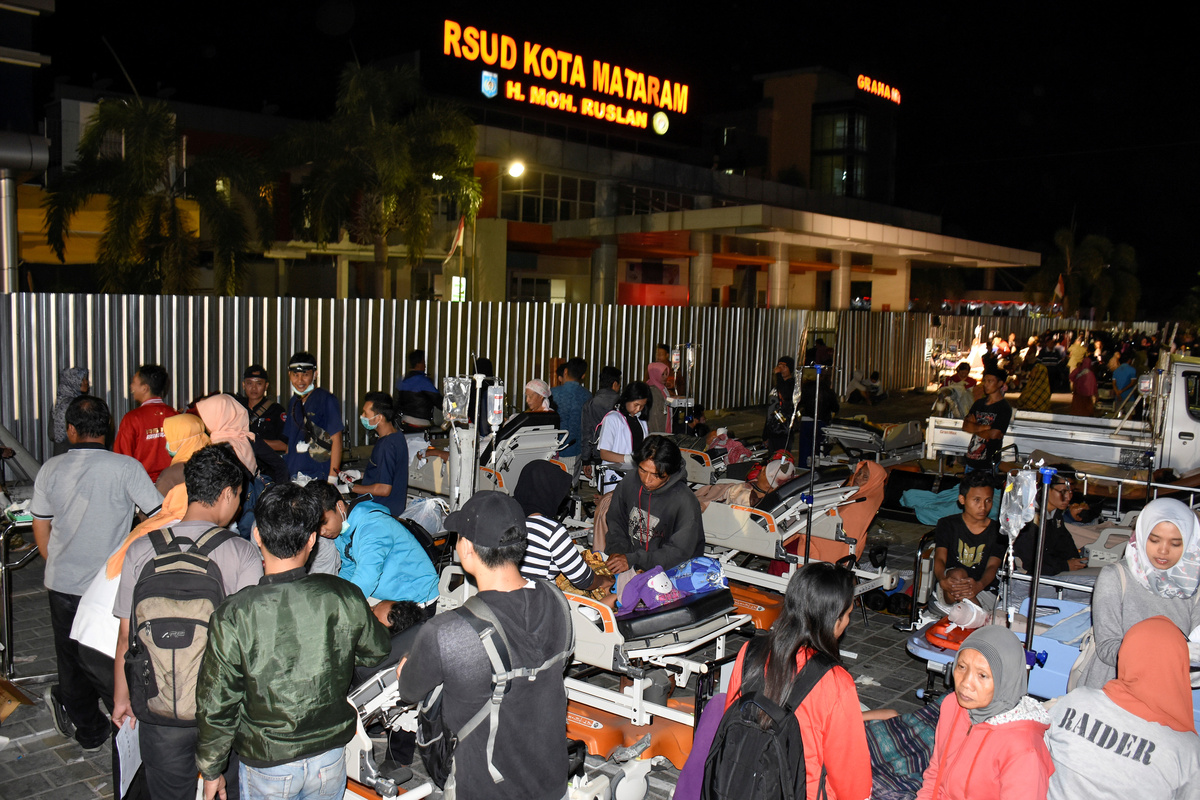 Patients are evacuated outside to the parking lot of Mataram City General Hospital after a strong earthquake is felt in Mataram in eastern Lombok island, Indonesia, on Sunday.

"I was watching TV when I felt a big shake," Harian, a Lombok woman who gave one name, told The Associated Press. "The lamp was shaking, and people were shouting 'Get out.' I ran out into the dark because the power cut off."

Photos from across the island show dozens being wheeled off in stretchers after the quake.

Many wounded victims were treated outside of health clinics and hospitals due to the condition of damaged buildings. Officials expect the death toll to rise.

"Shopkeepers and tourists fled stores and restaurants en masse. A Balinese dance performance at a famous temple in Ubud ended with the audience jumping from their seats and running to the streets.

A magnitude 5.6 aftershock hit less than an hour later."

Famous for their picturesque beaches and mountains, buildings in Lombok and Bali height restrictions keep buildings from exceeding the height of coconut trees, the AP reports.

Just one week ago, a 6.4-magnitude earthquake rocked the region, leaving at least 16 people dead. Sunday's quake also comes amid an uptick in eruptions at Bali's Mount Agung volcano, Vigeland reports. Mount Agung lies on the Pacific Ocean "Ring of Fire," a string of volcanoes and fault lines.