Accessibility links
'This Little Light Of Mine' Shines On, A Timeless Tool Of Resistance Born as a children's song, transformed by the civil rights movement into an anthem, "This Little Light of Mine" works by letting the singer control their own story. 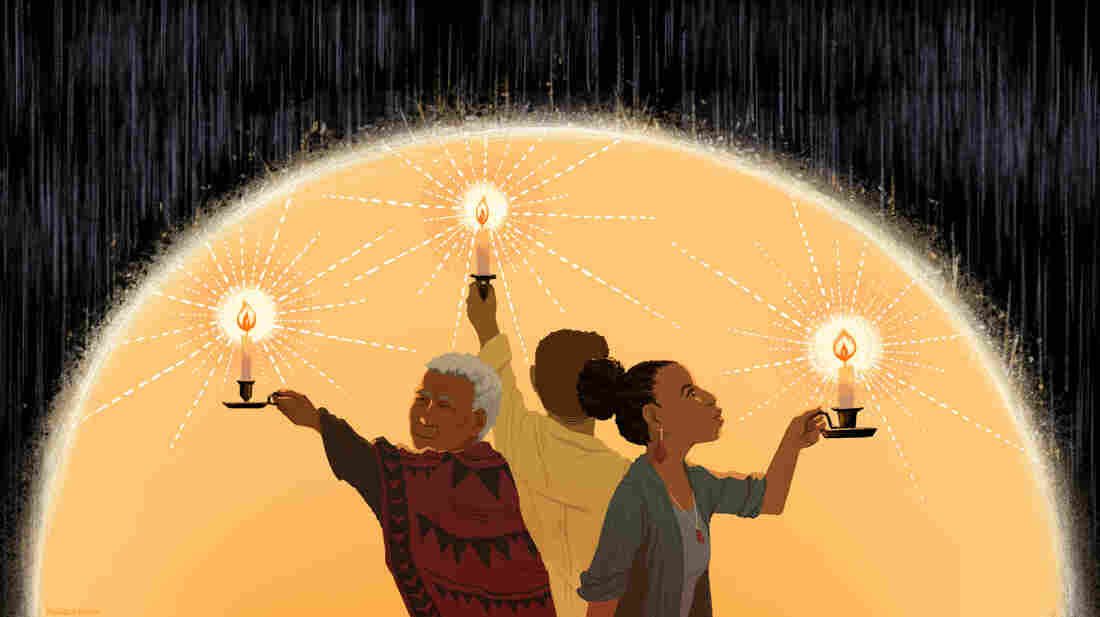 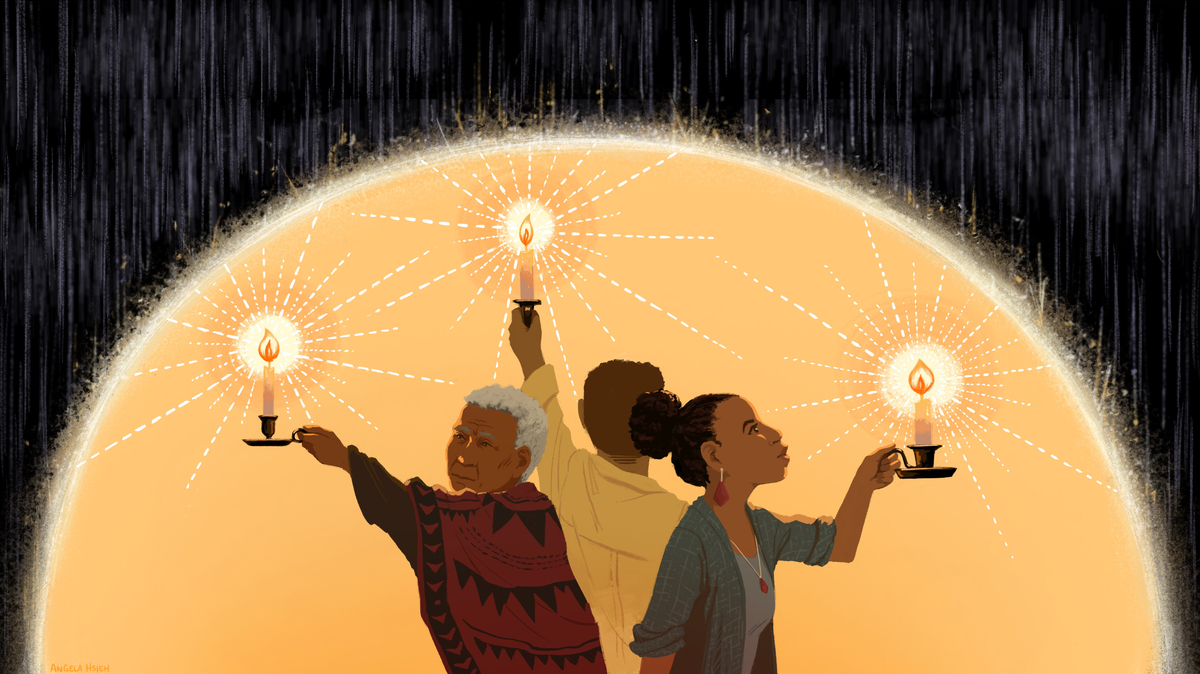 Ask Freedom Singer Rutha Mae Harris, and she'll tell you plainly: You can't just sing "This Little Light of Mine." You gotta shout it:

On a Monday morning, Harris' powerful voice fills the small church right next to the Albany Civil Rights Institute in Georgia. She's showing them how she and her fellow Freedom Singers — a renowned quartet that raised money for student activists during the civil rights movement — belted out songs to get through dangerous protests.

A muscular version of "This Little Light of Mine" is the emotional high point of Harris' presentation: a unifying affirmation that gives the crowd a taste of that feeling from the 1960s. She says the song helped steady protestors' nerves as abusive police officers threatened to beat them or worse.

"Music was an anchor. It kept us from being afraid," Harris says. "You start singing a song, and somehow, those billy clubs would not hit you. It played a very important role in the movement."

Fans know "This Little Light of Mine" as a beloved children's tune, recognized around the world. But it's also a spiritual, which was transformed by the nation's civil rights movement into an anthem of singular power. And the song has the same impact in today's times, where demonstrators still leverage its message to push back against injustice.

Last year, Reverend Osagyefo Sekou used "This Little Light of Mine" to curb passions during a counter-protest, before a crowd of white supremacists and alt-right supporters gathered for the Unite the Right rally in Charlottesville, Va.

"We had originally said we were going to stand silently," says Rev. Sekou, a recording artist, author, theologian and activist who helped train volunteers at the counter-protest. "But the Nazis were marching past us in these various battalions, cursing and yelling — mostly homophobic slurs — at us. And you could feel the energy of the people who weren't with us, who we had not trained. [They] were getting amped up."

Sekou says he knew, in that moment, he had to change the atmosphere. "I know song can do that. So I just broke into 'This Little Light of Mine.' "

In a moment captured on video, the clergy and volunteers who sang — a group that included famed academic and activist Cornel West — are shown standing in a line, their voices rising over the chants of "You will not replace us" from the rally crowd. "The tensions went down ... and it shook the Nazis," Sekou says. "They didn't know what to do with all that joy. We weren't going to let the darkness have the last word."

It makes sense that a song with this much power would also be one of the most versatile anthems around, inspiring all kinds of musical artists. Rev. Sekou brought a different version of the song to NPR's Tiny Desk Concert series in July. Before that, Bruce Springsteen used it to take his audiences to church, playing a gospelized version during his tour with The Seeger Sessions Band. The Disney Channel built a 2012 movie around the song, called Let It Shine, that added rap. The tune even brought a little soul music to the last royal wedding, courtesy of British gospel artists Karen Gibson and the Kingdom Choir.

So who created "This Little Light of Mine"? Some books credit Harry Dixon Loes, a teacher and composer born in 1892 who edited at least a dozen hymnals and songbooks and wrote more than 3,000 songs, according to his 1965 obituary.

That would be an interesting cross-pollination: a white composer creating a song popular in black churches. But researchers at Moody Bible Institute, where Loes taught for 21 years, say they found no evidence he wrote the song or claimed to write it. They note that he did create a popular arrangement of it in the 1940s: Singers like George Beverly Shea and Helen McAlerney Barth recorded versions of it.

But once the song was popular, it belonged to everyone. As the civil rights movement grew in the 1950s and '60s, singers changed the lyrics to reference their struggles. These new versions were known as "freedom songs."

"They are simple melodies that can be sung by a small group or a large group," says Robert Darden, a gospel music historian and professor at Baylor University in Texas. "And the lyrics are composed in a way that the names of who they are protesting against can easily be inserted. They can be personalized and set to a place."

Why 'Dancing In The Street' Gets The People Going

Fannie Lou Hamer, Zilphia Horton and other legendary activists sang "freedom song" versions of "This Little Light of Mine" and passed them on for others to use. One place where a lot of this sharing occurred was the Highlander Folk School (now known as the Highlander Research and Education Center), a cultural center in Tennessee where activists including Rosa Parks, Pete Seeger and Martin Luther King Jr. gathered to trade ideas.

Candie Carawan — who worked with her late husband Guy, Highlander's former music director — says songs like "This Little Light of Mine" could be nonviolent weapons. "It's a way to speak to power in way that's not going to get you shot," Carawan says with a chuckle. "It's a way to say, 'This is what we think. This is what we feel.' But, you know, you're singing it."

"Some of my favorite spirituals are the ones that have an implied defiance to them," Robert Darden adds.

It might seem odd to call such an innocent-sounding song defiant. But that's exactly how blues singer Bettie Mae Fikes says she felt when creating her classic version of "This Little Light of Mine" in 1963. She improvised the lyrics after a protest in which several of her friends had been attacked.

"And I'm thinking, 'How is the light [going to] shine, when they're trying to put our lights out?'" Fikes says. "So everybody was taking verses — and in order to come in, I just went into the slave call."

The result was a long, melismatic vocal run that turned into verses where she named specific officials — such as the former sheriff of Selma, Ala."I just started adding our oppressors in the song: 'Tell Jim Clark, I'm gonna let it shine,' " Fikes says. "And as I added my oppressors, other people in the audience began to shout out: 'Tell the KKK!' "Tell our president!' It was like being free."

Fast forward a half-century and the song is still unifying people. Consider the Christian electronic dance music band LZ7, which had a hit single in 2010 with an amped-up version of the song, inspired a bit by the Black Eyed Peas' "Where Is the Love?" Frontman Lindz West says the track is an attempt to inspire youth who won't necessarily respond to a traditional spiritual or hymn.

"I love the old hymns. I love 'Amazing Grace.' But how does that connect to a 12-year-old kid in inner-city London?" he says. "This is written for the kids that would never step into a church, but they'd step into a club with us and have a dance."

West says the group has performed its version of "This Little Light of Mine" before thousands of fans across the world. For him, it's an anthem because it sticks in people's heads — including his own during recording, he notes with a laugh — but also because it inspires, something West sees when he visits schools in Britain.

"Anthems are uplifting and game-changing, and they set standards. Something like 'This Little Light' is just that," he says. "What makes it anthemic is, you see lives transformed. You see kids saying, 'I'm not giving up on life,' or, 'I'm not cutting anymore.'"

Still, a question persists: Why has "This Little Light of Mine" survived so long, in so many different settings? Robert Darden, who has written about the song in at least two books, has a theory.

"Ask some of the survivors of the civil rights movement, as I have — survivors who sang these songs for protection and for courage — why 'This Little Light of Mine' survives and is still sung in the #MeToo movement and women's movement," he says. "They look at me straight in the eye and they say, 'It is because those songs are anointed.' As an academic, I have no way to refute that. Nor do I want to."

Whether or not you believe the song is blessed, it's obvious this American anthem sparks a powerful feeling, which has made so many who sing it feel a little less alone and a little more free. That probably explains the enduring power of "This Little Light of Mine" better than any other reason.