Accessibility links
Trump Endorses Kobach For Kansas Governor Over Republican Incumbent Kansas Secretary of State Kris Kobach made his name by championing strict voter registration and writing anti-immigration laws. Now he wants to be the state's next Republican governor. 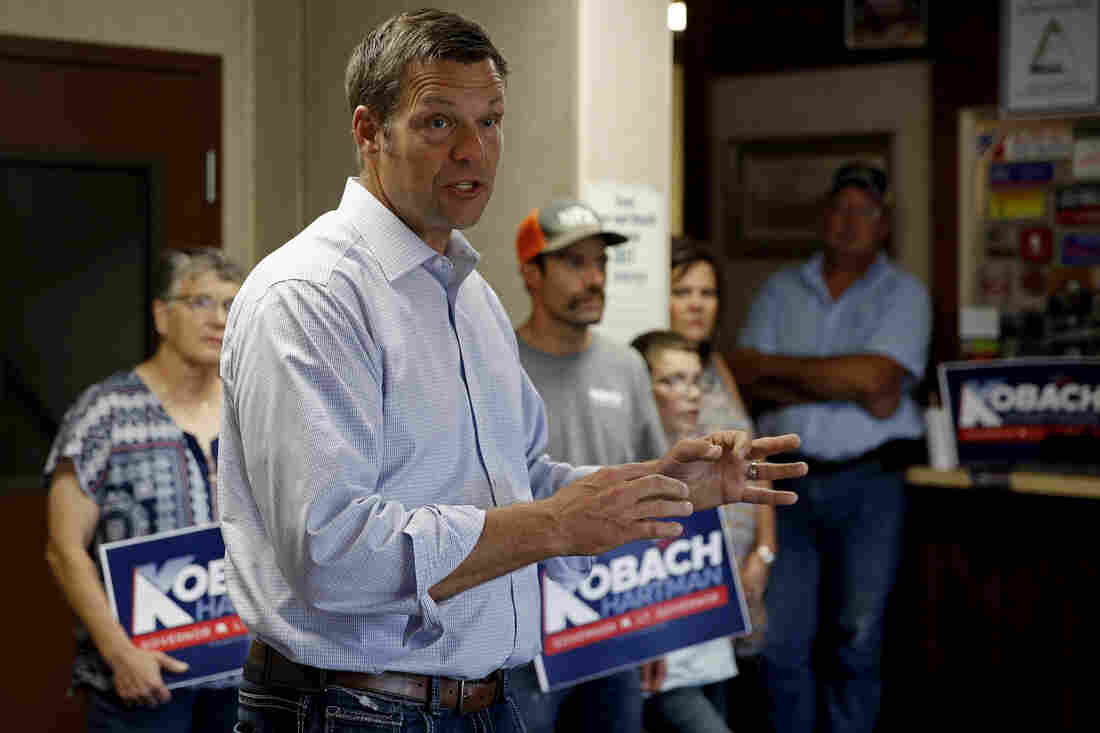 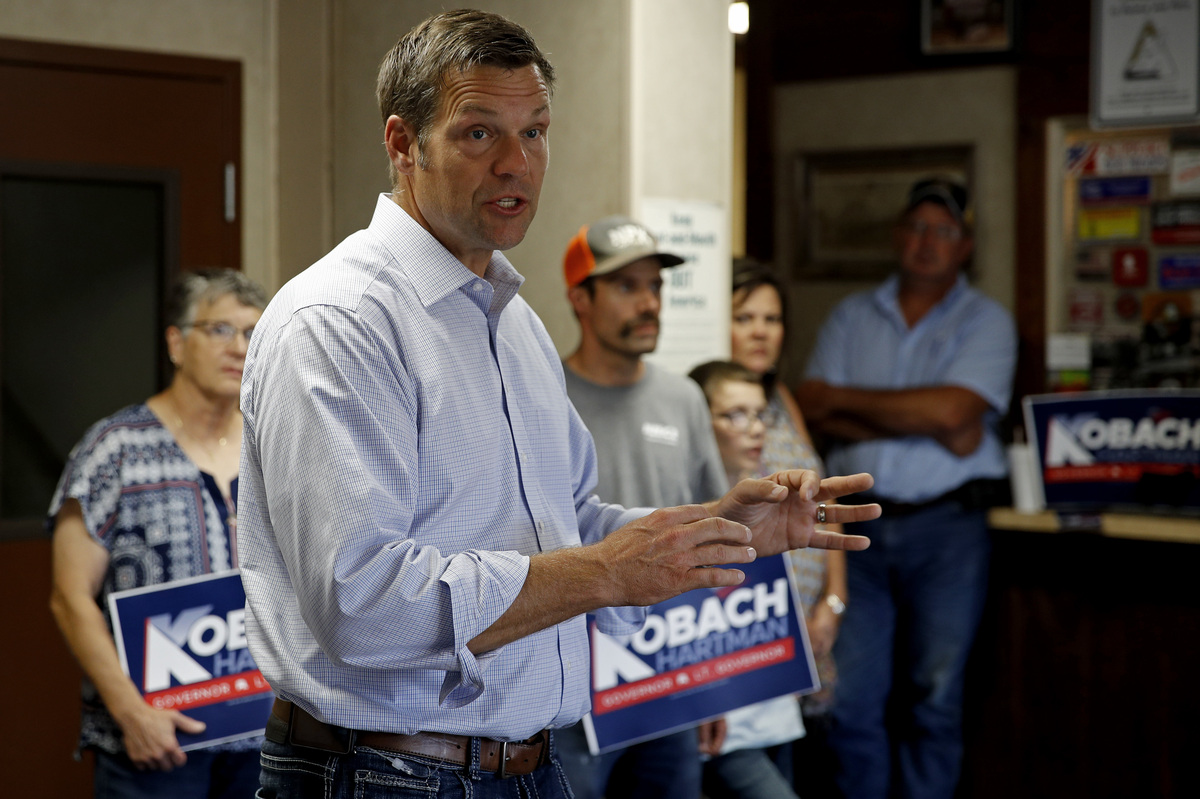 Kansas Secretary of State Kris Kobach and candidate for the Republican nomination for Kansas Governor addresses supporters during a campaign stop.

One of the nation's most vocal promoters of unsubstantiated voter fraud claims hopes to eliminate his own party's sitting governor in Tuesday's primary.

The day before the primary, President Trump tweeted an endorsement for Kobach, "he will be a GREAT Governor and has my full & total Endorsement! Strong on Crime, Border & Military."

Kris Kobach, a strong and early supporter of mine, is running for Governor of the Great State of Kansas. He is a fantastic guy who loves his State and our Country - he will be a GREAT Governor and has my full & total Endorsement! Strong on Crime, Border & Military. VOTE TUESDAY!

Trump made no reference to the voter fraud commission, which brought Kobach and the president together, but voter registration is still Kobach's rallying cry. "Every time a non-citizen votes, it effectively cancels out the vote of a U.S. citizen," he said in a recent interview. "That's a problem."

But in federal court in March, experts tore apart his claims that non-citizens are carrying out widespread voter fraud. The judge who tried the case ruled against him.

That ended what the ACLU called the nation's strictest voter registration system. Kobach had blocked tens of thousands of people from joining Kansas voter rolls.

The same court case saw Kobach held in contempt for violating an injunction meant to safeguard voting rights. He was charged lawyer fees for that, and fined for misleading a judge.

All of this happened even as Kobach campaigned to unseat Gov. Jeff Colyer. But it's unclear whether his courtroom woes will turn voters against him. Colyer is leveraging Kobach's most embarrassing moments in hopes that it will.

"There is only one candidate on this stage," Colyer said at a recent debate, "who has been fined by a federal judge for lying to a federal court."

Colyer is a fellow conservative who inherited the governorship earlier this year when his deeply unpopular predecessor left for a U.S. State Department job. But he isn't a shoo-in. Seven candidates are vying for the GOP nomination. The winning nominee doesn't need a majority — just the highest percentage of votes.

At Washburn University in Topeka, Kan., political scientist Bob Beatty says that means Kobach's base could be his ticket to defeating Colyer.

Kobach is selling himself as the true conservative — someone who won't compromise with the Republican party's moderate branch, let alone Democrats.

"If you're talking about a wishy-washy politician who just says whatever he thinks you want to hear," Kobach says, "you don't know if that guy's going to deliver."

The former law professor — with degrees from Harvard, Yale and Oxford — lost his bid for Congress in 2004 by a hefty margin. But he continued to build his profile by crafting and defending anti-immigration laws around the country. He has hosted his own talk radio show, writes for Breitbart and is a go-to guest when Fox News needs an unapologetic conservative.

His critics accuse him of pandering to or benefiting from white nationalist sentiment, but he dismisses them.

"I don't have a racist bone in my body," he says. "I believe we are all God's children."

Kobach has repeatedly said Somali refugees stole a 2010 election in Kansas City — even though a court found that untrue. He's a key supporter of Trump's claim that millions of illegal ballots cost him the popular vote in 2016. Politifact has dubbed the assertion "Pants on Fire" false.

Kobach's war against voter fraud bonded him with the president from the start. He has confirmed Trump considered him to lead the Department of Homeland Security before tapping him for the voter fraud commission. More recently, the president's son, Donald Trump Jr., has been helping Kobach raise money for his campaign.

"My objective is to lead the state of Kansas," he says. "And to solve a couple of problems that we have."

Top on his list, he says, is cutting taxes and finding ways to discourage immigrants who enter the country illegally from making Kansas their home.

This story comes from the Kansas News Service, a collaboration covering health, education and politics.