Accessibility links
Venezuela Detains 6 People Following Apparent Attempt On Maduro's Life President Nicolas Maduro emerged unscathed after blasts interrupted his televised address. But now, the focus is turning to who was responsible — and how hard the authoritarian regime will retaliate. 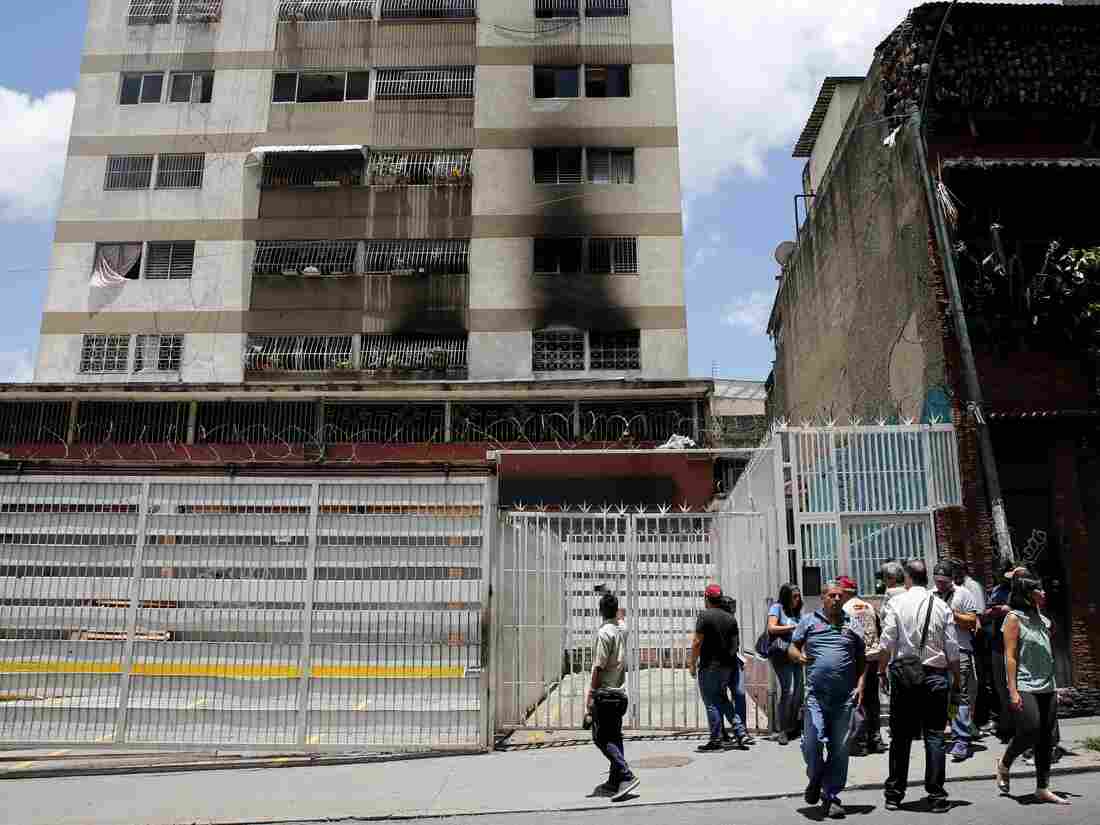 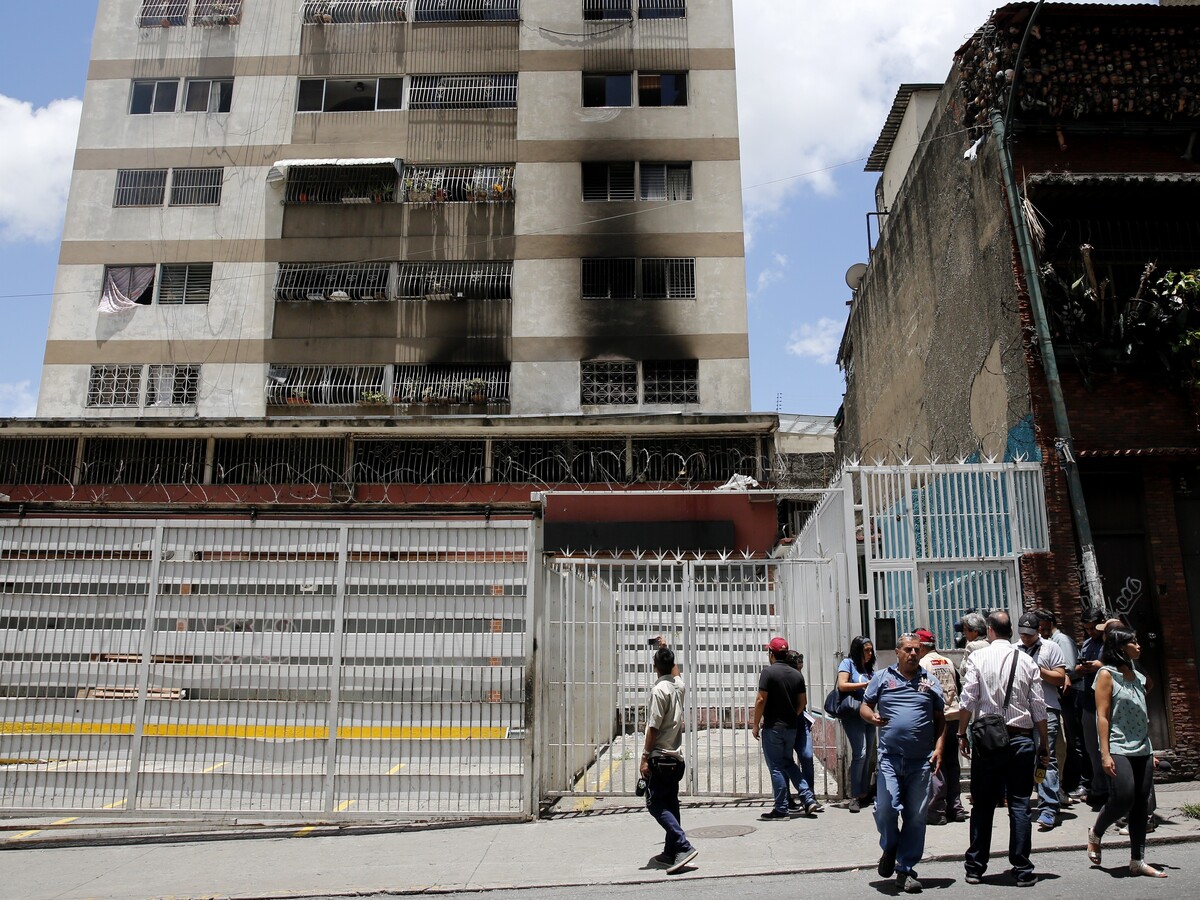 Members of the media circulate outside an apartment complex where an allegedly armed drone crashed Saturday in Caracas, interrupting President Nicolas Maduro's speech.

Venezuelan authorities have detained six people in connection with an apparent attempt to assassinate President Nicolas Maduro, according to the country's interior minister, Néstor Luis Reverol. The minister explained Sunday that they're also seeking to question at least one more person about the explosions that interrupted Maduro's televised speech to national guard troops a day earlier.

Reverol says it was a pair of commercial drone aircraft, each carrying about two pounds of C4 explosive material, that bore down on the ceremony. But the drones malfunctioned, he added — one hitting a nearby apartment building, the other crashing after getting disoriented by government jamming signals.

The blasts ended up injuring at least seven troops but left the president, seemingly their intended target, physically unscathed.

The moment marked yet another successful evasion for the embattled leader, who survived months of rampant and often deadly unrest last year to emerge with a tight grip on Venezuela's levers of power.

That grasp was evident in his landslide re-election last May in a vote boycotted by the opposition and widely condemned as fraudulent. Even as his country continues to be buffeted by spiraling hyperinflation, food shortages, eroding medical infrastructure and a massive exodus of desperate Venezuelans, Maduro has managed to crush dissent partly on the strength of his alliance with Venezuela's security forces, buttressed by an image of untouchability.

That image was undermined in the footage of Saturday's chaos, which depicts Maduro's look of shock before the camera cuts away to a wide shot — which, in turn, shows troops breaking ranks to scramble to safety.

"I hear screams and I saw National Guardsmen with long guns on the streets, running like crazy. They even pushed an old lady who was trying to run," one activist, who had been protesting the ceremony nearby, told The New York Times. "Imagine this: Our military are supposed to protect us, and then you see them running like that."

It remains unclear who was behind the attack.

An obscure group calling itself the Movimiento Nacional Soldados de Franelas — or the "National Movement of Soldiers in T-shirts," according to Reuters' translation — appeared to claim responsibility on social media over the weekend, saying Saturday that its two drones were shot down by snipers.

"It was not successful today," the group tweeted, adding that it is just a matter of time.

Maduro himself has laid the blame with far-right Venezuelan groups and neighboring Colombia, a vocal critic of Maduro's authoritarian, socialist regime that has lately received many of the hundreds of thousands of Venezuelan migrants escaping over the border. Authorities in Bogota, for their part, have denied involvement.

Harold Trinkunas, deputy director of Stanford's Center for International Security and Cooperation, tells reporter John Otis that the incident appears more consistent with a likely plot by a rogue group such as the Soldados.

"These attacks that can be mounted by just a few individuals flying drones are the kinds of things you'd expect to see in a country where it's very hard to organize any other type of resistance movement," Trinkunas says.

No matter who was behind what happened, opposition leaders fear they know what might come next: another government crackdown, this time retaliating for the incident. A coalition of opposition groups known as Broad Front explained in a statement Sunday, translated by The Associated Press, that it does not believe Maduro's allegations.

"It's evident that the initial reaction of the government isn't aimed at attempting to clarify what happened," the coalition said, "but rather to take advantage of the situation and irresponsibly and sweepingly attack the 'opposition.' "