Accessibility links
Alex Jones, Infowars Content Banned By YouTube, Apple and Facebook Alex Jones' Infowars site accused the companies of censorship. Apple said, "We believe in representing a wide range of views, so long as people are respectful to those with differing opinions." 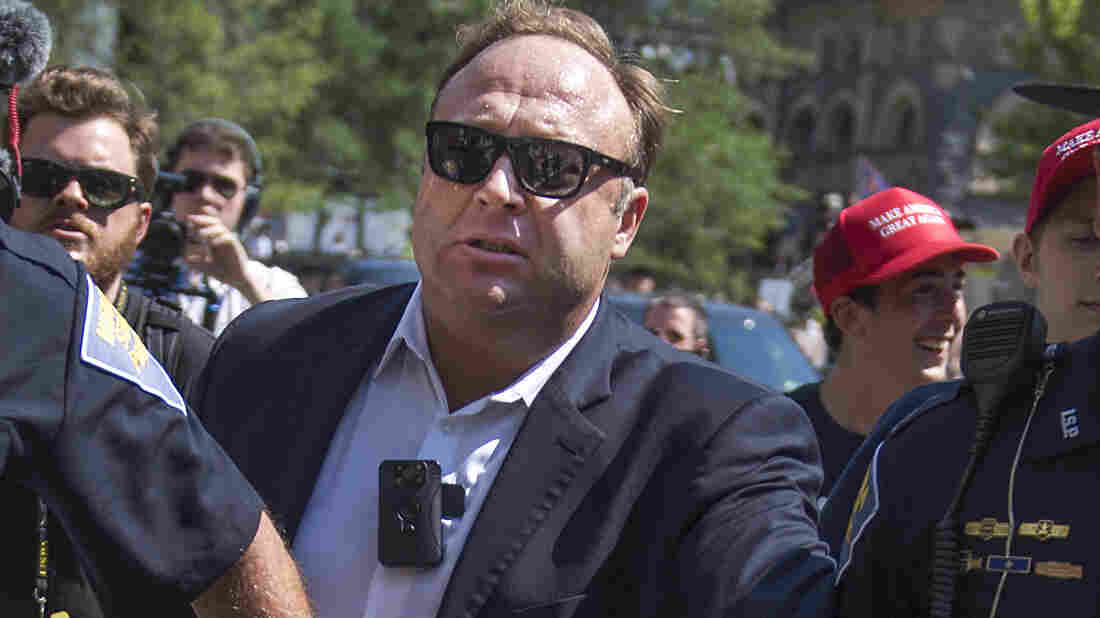 Alex Jones and his Infowars channels have been removed from YouTube; Facebook and Apple's iTunes have also deleted most or all of his outlets on their services. He's seen here being escorted from a rally near the 2016 Republican National Convention. Tom Williams/CQ-Roll Call Inc./Getty Images hide caption 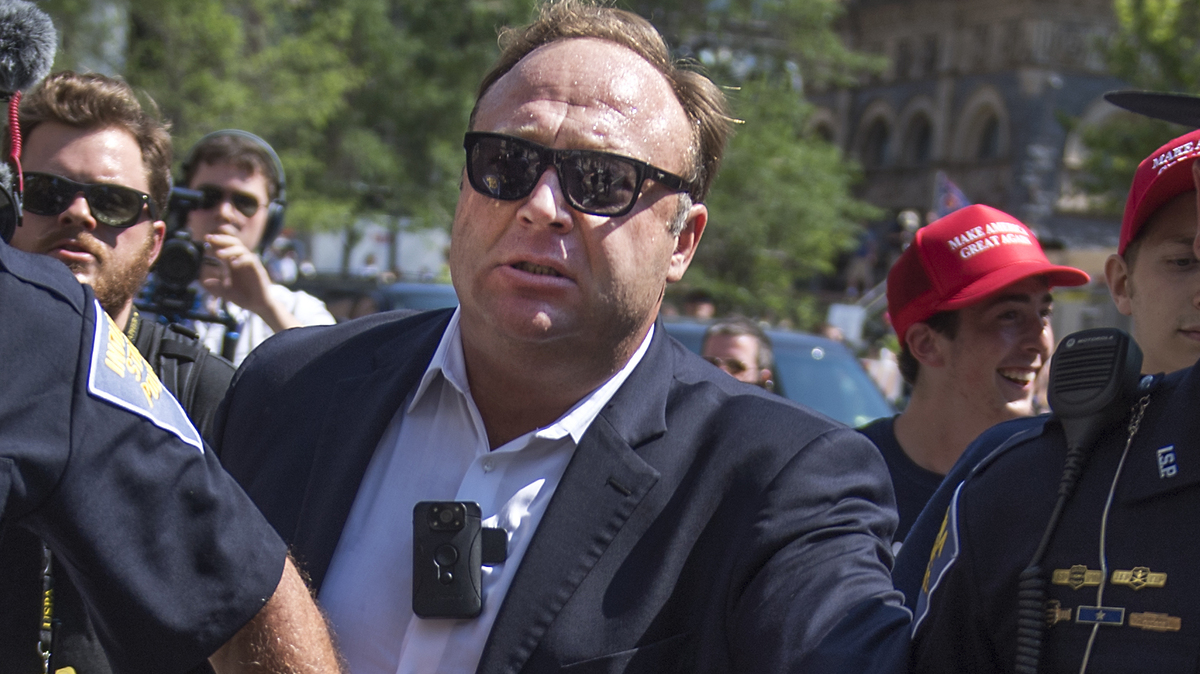 Alex Jones and his Infowars channels have been removed from YouTube; Facebook and Apple's iTunes have also deleted most or all of his outlets on their services. He's seen here being escorted from a rally near the 2016 Republican National Convention.

YouTube, Apple and Facebook have removed main outlets for conspiracy theorist Alex Jones and his Infowars website, citing repeated violations of policies against hate speech and glorifying violence. Infowars responded by accusing the companies of censorship.

The streaming service Spotify also expanded a ban imposed last week on some of Jones' content, saying Monday that "The Alex Jones Show has lost access to the Spotify platform."

On Sunday, Apple and iTunes deleted five podcasts related to Infowars and Jones. The other bans then piled up in quick succession.

"Apple does not tolerate hate speech," the company said in a statement. "We believe in representing a wide range of views, so long as people are respectful to those with differing opinions."

YouTube and Facebook had previously warned Jones and Infowars that they were accumulating "strikes" by violating the services' community standards.

"We believe in giving people a voice, but we also want everyone using Facebook to feel safe," the company said in a statement. "It's why we have community standards and remove anything that violates them, including hate speech that attacks or dehumanizes others."

Last month, Facebook removed four specific videos from Alex Jones and Infowars-related pages for violating its hate speech and bullying policies, while Jones himself received a 30-day suspension from Facebook. (YouTube also took down the four videos and banned Infowars from live streaming for 90 days.)

"Since then," Facebook said in its Monday statement, "more content from the same pages has been reported to us — upon review, we have taken it down for glorifying violence, which violates our graphic violence policy, and using dehumanizing language to describe people who are transgender, Muslims and immigrants, which violates our hate speech policies."

Facebook says the pushing of "fake news" had nothing to do with Jones' removal.

Not long after Facebook's move, YouTube said that it, too, had taken action.

Jones apparently also fell afoul of the outlet because despite a July 24 ban against him — for child endangerment and hate speech — his channel tried to send viewers to live video streams on other YouTube channels.

"When users violate these policies repeatedly, like our policies against hate speech and harassment or our terms prohibiting circumvention of our enforcement measures, we terminate their accounts," a YouTube spokesperson told NPR.

Last Thursday, Spotify said it had removed some episodes of The Alex Jones Show but did not specify which ones, or how many in total.

In announcing Monday's total ban, a Spotify spokesperson said in a statement to NPR, "We take reports of hate content seriously and review any podcast episode or song that is flagged by our community."

The bans and deletions come as big tech companies have faced intense scrutiny and criticism over their role in the spread of bogus news stories and the incitement of hatred — and their potential use as tools to manipulate voters and public opinion.

"Mega Purge!" RealNews tweeted on Monday morning. Paul Joseph Watson, Infowars' editor at large, wrote, "Spotify has now completely banned Infowars too. Apple, Facebook, Spotify all within 12 hours of each other. This isn't enforcement of [terms of service], it's coordinated big tech censorship. This is real election meddling."

Jones is currently facing five separate defamation suits. He has been accused of knowingly spreading false information about the Marjory Stoneman Douglas High School shooting this year, the violence in Charlottesville, Va., last year and the Sandy Hook Elementary School shooting in 2012. Three of the defamation cases have been filed by families of Sandy Hook victims.

When the tech companies recently started pushing back on Infowars, Jones, a syndicated radio host, released a video in which he encouraged his audience to go directly to his website and sign up for its newsletter.

"So there's no way the censors can get between us," he said.

On Monday, Jones stated that "America has been sold out," and the Infowars Twitter feed declared that the moves against his company were "communist style censorship."

Jones also urged people to go to his online store and buy a T-shirt, with slogans that back his site and President Trump's re-election campaign.