Accessibility links
In Amsterdam, Even The Tourists Say There Are Too Many Tourists Fewer than 1 million people live in Amsterdam, but almost 20 million visit each year. A "night mayor" and initiatives to address "overtourism" encourage revelers to treat the city with respect. 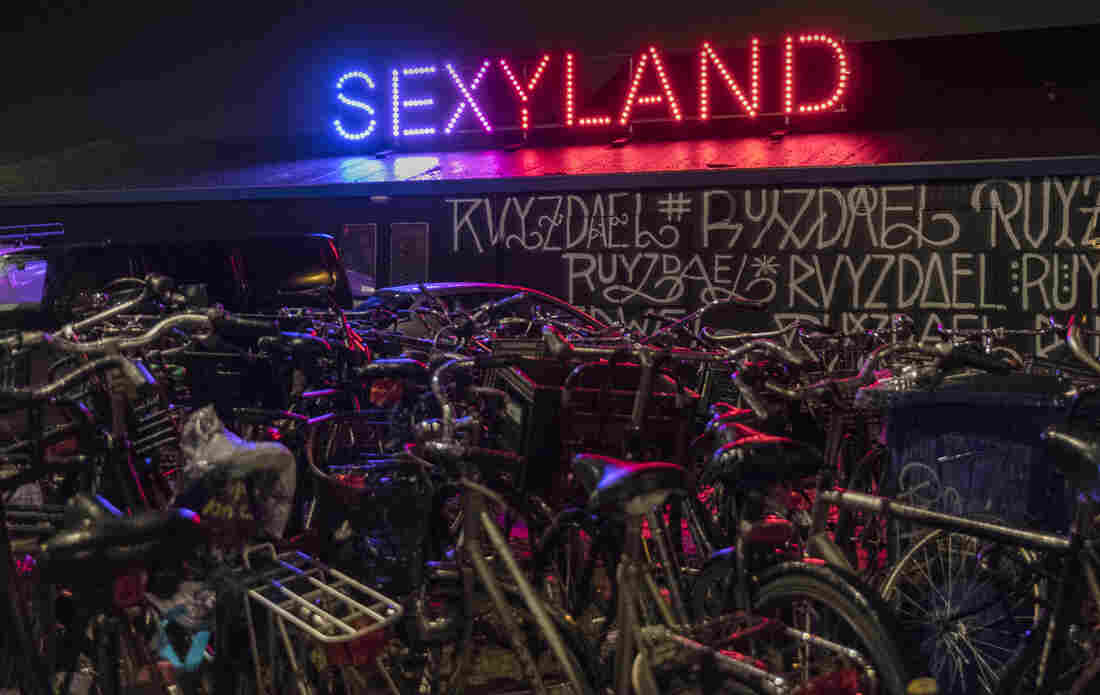 Fewer than 1 million people live in Amsterdam, but almost 20 million visit each year. The city is working to crack down on "overtourism." Above, bicycles are parked outside Sexyland nightclub. Horacio Villalobos/Corbis via Getty Images hide caption 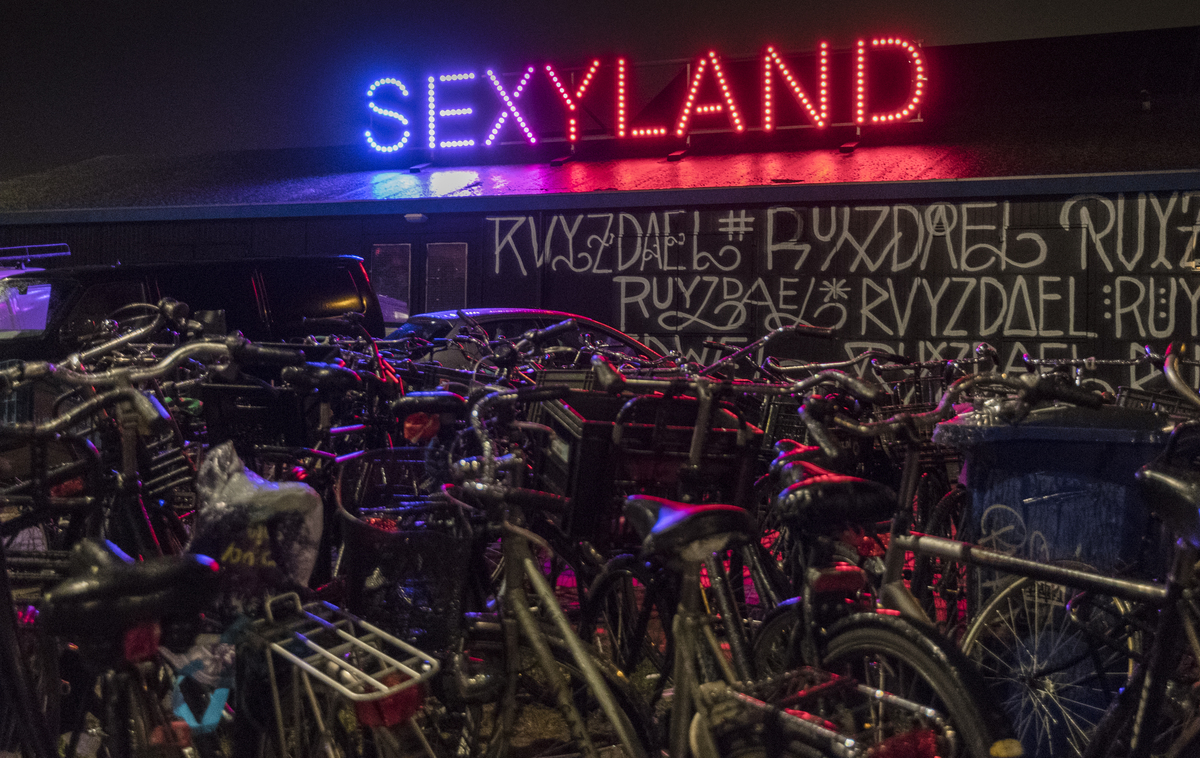 Fewer than 1 million people live in Amsterdam, but almost 20 million visit each year. The city is working to crack down on "overtourism." Above, bicycles are parked outside Sexyland nightclub.

Bert Nap has had enough. On a recent night, the longtime Amsterdam resident opened his door to confront a gaggle of young, drunken British men, all dressed as Elvis for a bachelor party, making a tremendous ruckus.

Nap asked them: "Why don't you do that in your own hometown?"

This was hardly the first time he'd been disturbed by late-night revelers. Many are tourists who vomit in his potted plants, urinate in his mailbox, and scream-sing outside his door. "My city is seen as one where anything goes," he says.

Standing in front of Nap's open door, one drunken Elvis replied: Amsterdam sells drugs and prostitution — and he and his friends partake. "We buy your streets, we are paying for it," he recalls the Elvis told him. "Just move; go live elsewhere." 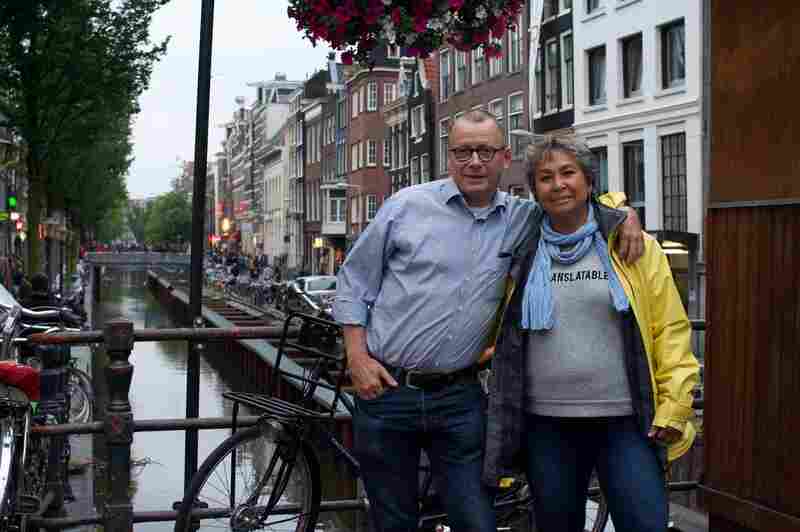 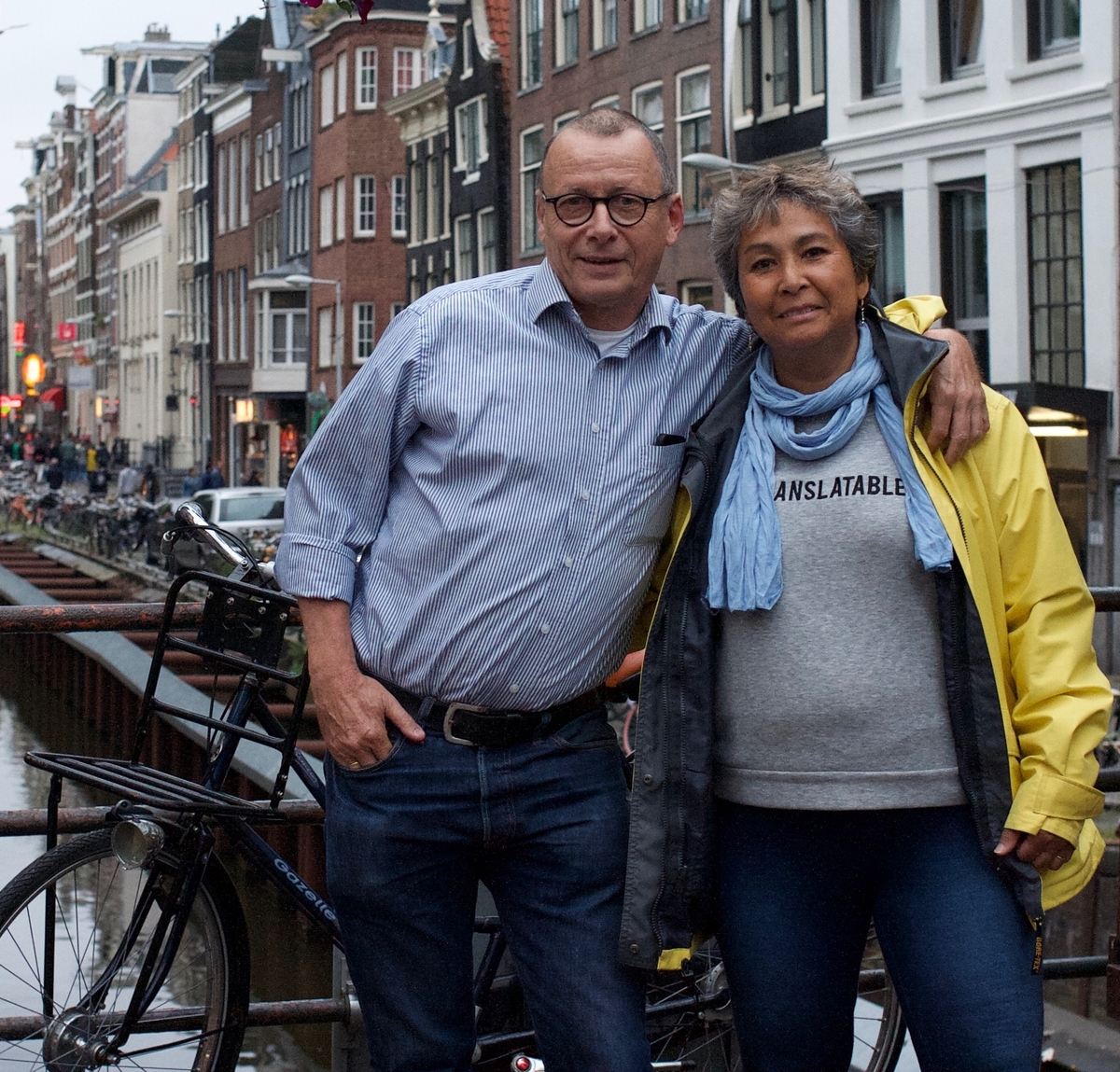 Nap, a 59-year-old author of language textbooks, does not want to live anywhere else. He moved here 40 years ago as a student. He and his German-teacher wife, Conchita Lavalette, 55, raised their daughter in a cute house between a chapel and a canal in Amsterdam's Red Light District.

Now, before you roll your eyes and think: The Red Light District? What did you expect, Mr. Nap? Consider that people have lived here for hundreds of years. The couple's daughter went to kindergarten next to the brothels.

"She grew up waving at the prostitutes, our neighbors," Nap says. "This was an actual neighborhood. Now, the tourists have crowded us out. It's a place where tourists mainly see other tourists."

Nutella waffles in a naughty Disneyland

Fewer than 1 million people live in Amsterdam, but city officials expect almost 20 million visitors this year. Most end up squeezing into the historic center of museums and canals and, of course, De Wallen, the oldest Red Light District in Amsterdam.

As a result, the center caters largely to tourists. Think cannabis cafes instead of grocery stores; trinket shops selling condom key rings instead of places where you can actually get keys made. And the smell of a popular stoner treat — waffles slathered with Nutella — replaces the fresh bread in bakeries.

The problem is especially acute at night, when young, male tourists, usually drunk or stoned, treat Amsterdam's historic center like a naughty Disneyland.

"People our age come here because the flights are cheap and Amsterdam has this reputation of being a kind of Sin City," says Callum Challinor, an 18-year-old college student visiting from London. "So they push the boundaries."

"But we won't," adds his girlfriend Emillie Whitelock, 19. "We're just here for the weekend, and we want to remember it. Even my parents told us to go to the Red Light District."

She frowns as she watches a group of men taunt prostitutes standing behind windows. The men hold out their smartphones, prompting one of the women to roll her eyes and mouth, NO PHOTOS. The men whoop-whoop loudly and walk away.

"The young and dumb," sighs Bettina Carroll, 26, watching the men. She's from Louisiana and is in Amsterdam on her honeymoon with her husband, Brett, 29. "And they're smoking joints," Brett observes. They "would be in jail back home."

The Carrolls hold hands as they walk along an alley just around the corner from Nap's home. The alley, lined with red-illuminated brothels, is packed with young men, of course, as well as moms pushing strollers, grandmothers, exchange students and a Red Light District walking tour group. It's just past 11 p.m. on a weeknight. The Carrolls are staying in a room in a resident's house in the neighborhood.

"Last night we couldn't sleep because people were yelling," Bettina Carroll says. "They were screaming until 4 o'clock in the morning. I couldn't imagine living here and hearing that constantly."

Barcelona is blocking construction of new hotels in the historic center, turning away cruise ships and cutting down the number of tourists allowed into Boqueria market. Croatia's stunning walled city, Dubrovnik — where HBO's Game of Thrones is filmed — has been overrun by fans. The mayor wants to drastically reduce the number of visitors allowed into the medieval center. There have been anti-tourism protests in Barcelona and Venice. Venice also has a team of stewards who patrol for bad behavior, which even includes eating sandwiches in historic areas.

Now, it's Amsterdam's turn. The city council is doubling the tax on hotel rooms to 6 percent, prohibiting short-term Airbnb rentals in the center and banning new souvenir shops. It's already banished something called The Beer Bike — a cart with 12 bicycle seats around a bar, so tourists could drink while pedaling along the canals.

And the city is trying to lure tourists away from the center by repackaging sites just outside Amsterdam, such as a strip of sandy coastline known to locals as Zandvoort and to tourists as "Amsterdam Beach."

There's also this video targeted to men between the ages of 18 and 34, reminding them that there are fines for bad behavior, including 140 euros ($164) for urinating in public and 95 euros ($111) for disturbing the peace. The messages appear on booking websites and at airports.

These measures are intended to root out tourists who "cause problems," says Udo Kock, a cheery former International Monetary Fund economist who is Amsterdam's deputy mayor.

But if your reason is nightlife, don't worry. The city still believes in it and even leans on a "night mayor" to keep a balance between cool and chaotic.

I meet the night mayor at Amsterdam's main train station, just as the sun sets. Amid the backpackers in T-shirts and cargo shorts, 32-year-old Shamiro van der Geld stands out in his deep-purple hat and nose ring.

Plus, unlike most European mayors, he's a hugger.

"Welcome to Amsterdam!" he declares.

The former music producer and television presenter was selected as the city's latest night mayor in February. He describes his job as being the "eyes and ears of Amsterdam at night." More specifically, he's a liaison between the city council and those who live, work and play after the sun sets.

"I actually do most of my work during the day," he says. "I talk with clubs and club owners, programmers, stakeholders who are interested in nightlife or have their company in nightlife." 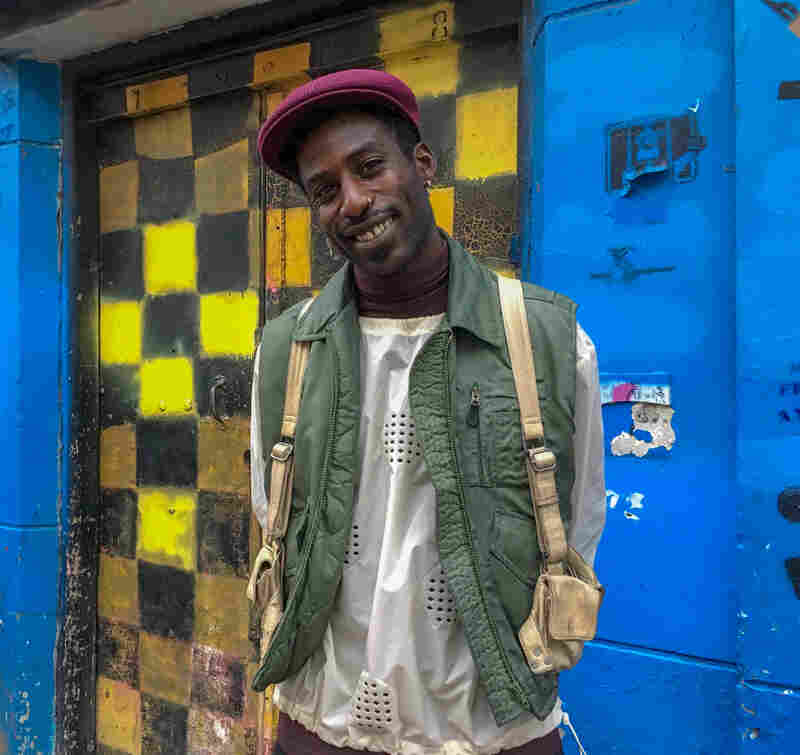 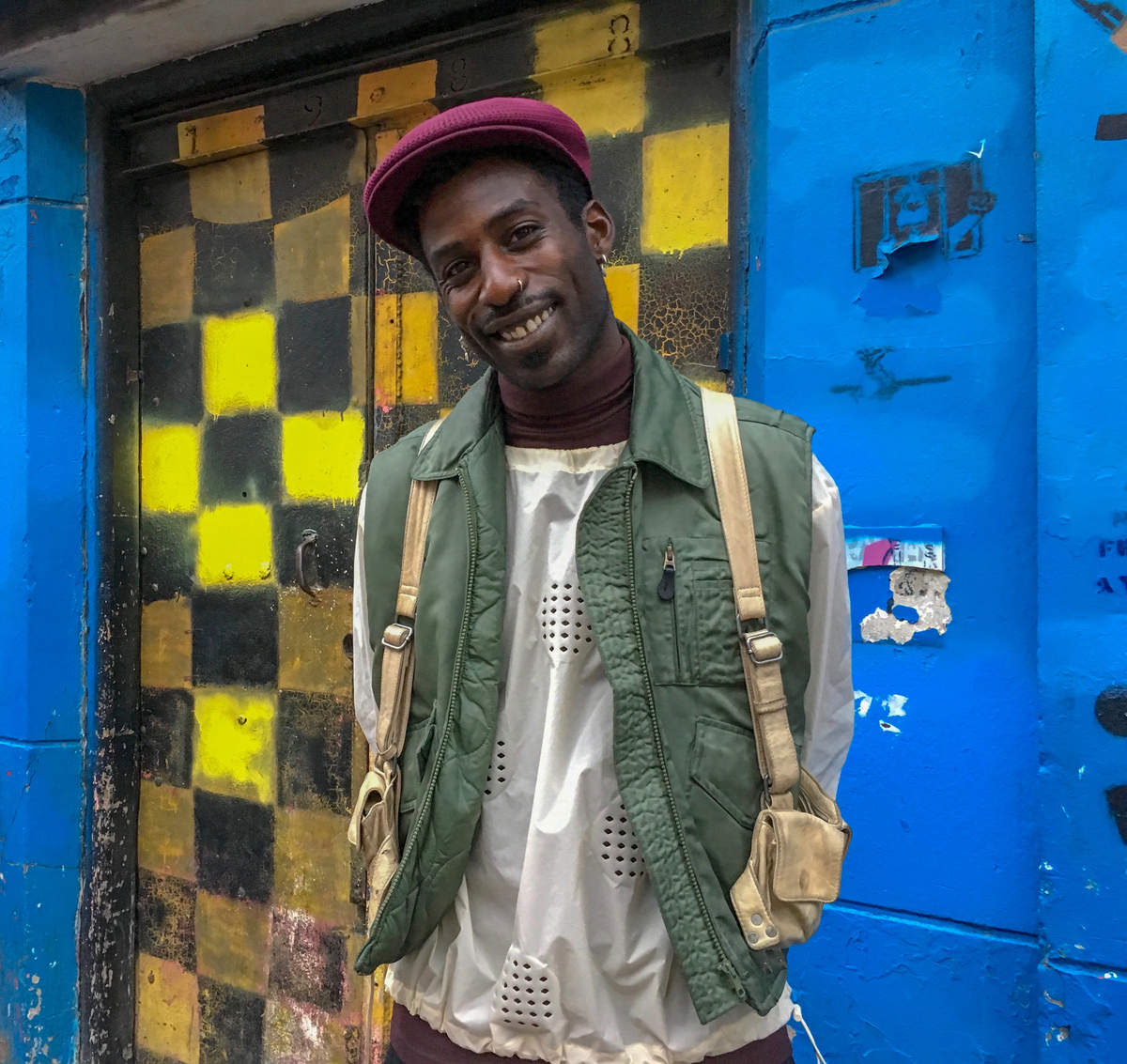 The night, he says, is full of things to do — dance, paint, perform, read, play games. He's especially trying to engage teenagers by creating a late-night space where they "won't get bored and do dumb things."

"This group of kids, they wander on the streets, and from being bored they start smoking hash or weed and they find a cheap bottle of alcohol," he says.

Van der Geld has also dealt with stoned tourists riding bicycles into traffic or jumping out of buildings.

"Things that happen with people who do not understand how we live," he says.

The idea of "night policy" has a record of success in Amsterdam thanks to van der Geld's predecessor, Mirik Milan, a former concert promoter. Milan formalized the night mayor post about six years ago and held the position until earlier this year.

Over coffee near a canal, he explains that he helped the city grant 24-hour licenses to clubs outside the center, drawing thousands of young fans of electronic music, a staple of Amsterdam's nightlife.

"One-third of the people that come there, they are tourists," he says. "So they're not hanging out in the city center, they're hanging out in the outskirts of the city. The night is an opportunity where we can spread out people."

He travels the world helping cities create their own night mayors. London, for instance, now has a night czar, Amy Lamé, a comedian and cabaret performer. The idea has also spread to cities in the U.S., including New York, Pittsburgh, Fort Lauderdale and, Milan adds with a smile, "good old Iowa City!"

"Loving this place to death"

Back in central Amsterdam, Elard Tissot van Patot appreciates how the night cultivates businesses. He runs Amsterdam Red Light District Tours, which he started as a one-man-band in 2014. He now employs five tour guides.

"Each year, there are more tourists," he says on a recent night, just after he has wrapped up a walking tour. "They may go to the Anne Frank House or the Rijksmuseum or go see the Van Gogh paintings. But at night they all end up here, in this little neighborhood, the Red Light District."

Two tourists from California — lawyer Matt Kaestner and waitress Gail Powers — have just finished Tissot van Patot's tour. Kaestner was last here 29 years ago and is shocked at how crowded it is. "Tourists are loving this place to death," he says. "Or loving the idea of it to death," adds Powers. "The real Amsterdam is not in these crowds. No one here is Dutch, except for the tour guide!"

I'm not going to leave because some drunk tourist tells me he's paying for the right to destroy my home and neighborhood and my right to some peace.

Just around the corner, in a cute house surrounded by bachelor parties and Nutella waffles, Nap — the language textbook writer terrorized by drunken tourists — says it's not too late to save Amsterdam from overtourism.

He welcomes the new laws. He notices that tourists themselves are grumbling about "too many tourists." And he was thrilled when the new mayor of Amsterdam, Femke Halsema, inaugurated last month, invited him to join her on a night walk through central Amsterdam so she could experience the problems firsthand.

"My neighbors, my wife and I feel like we're barely hanging on here, but we're willing to fight for our neighborhood," he says. "I'm not going to leave because some drunk tourist tells me he's paying for the right to destroy my home and neighborhood and my right to some peace. No one can buy us out."