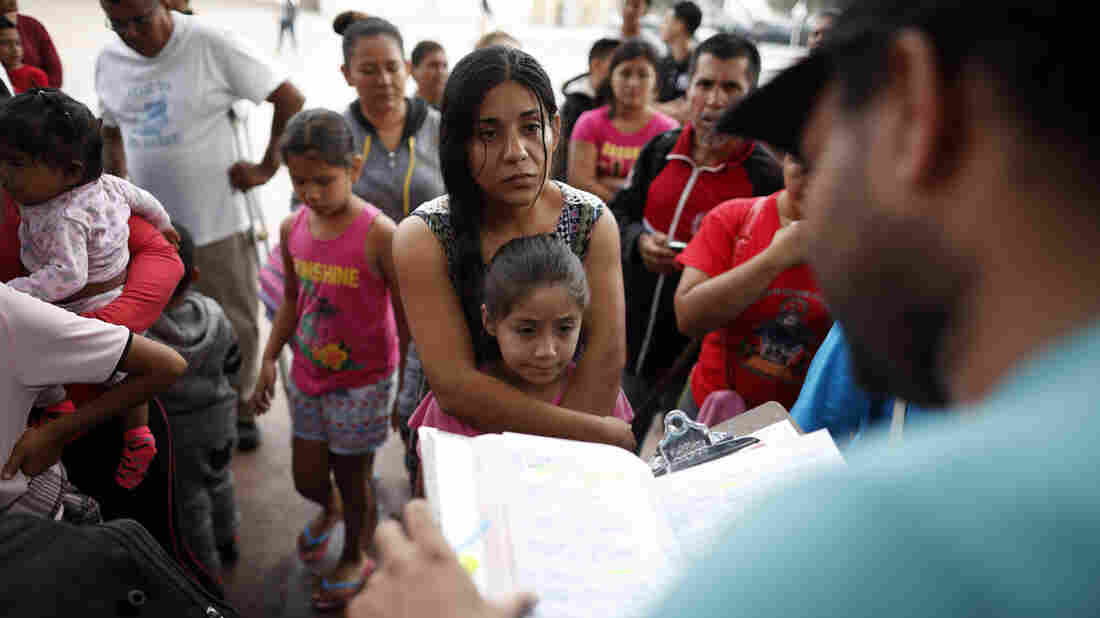 A woman from the Mexican state of Michoacán who did not give her name stands with her daughter at the San Ysidro Port of Entry in Tijuana, Mexico, as names are read off a list of people who will cross into the United States to begin the process of applying for asylum. Gregory Bull/AP hide caption 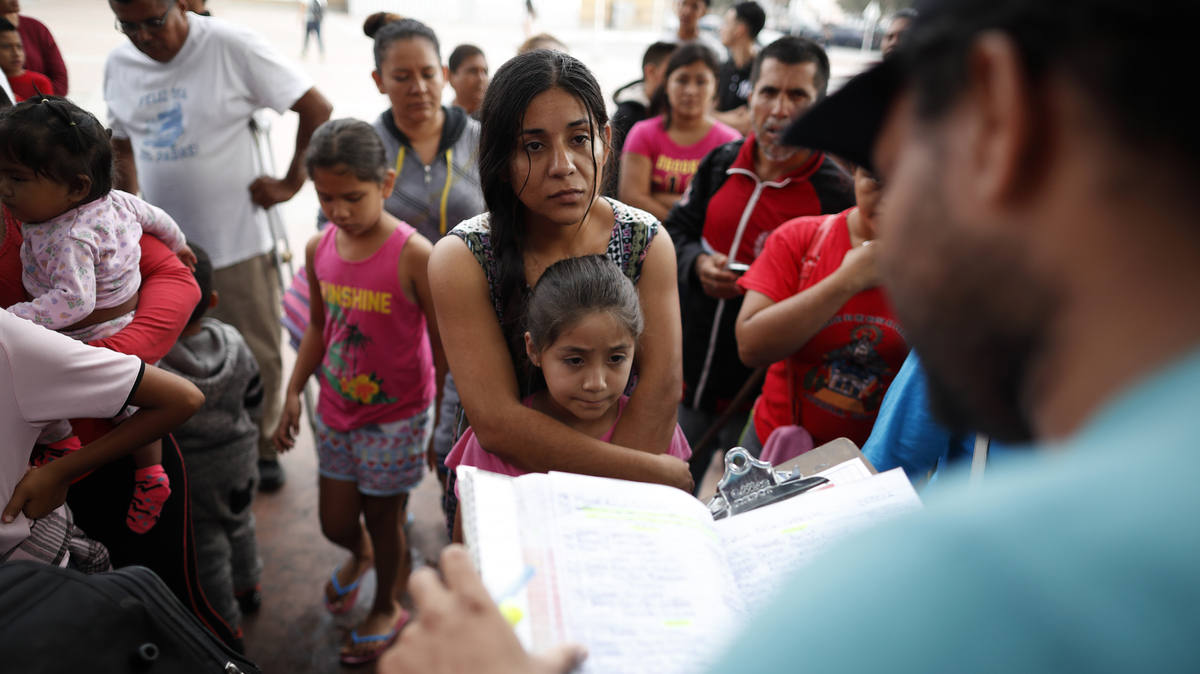 A woman from the Mexican state of Michoacán who did not give her name stands with her daughter at the San Ysidro Port of Entry in Tijuana, Mexico, as names are read off a list of people who will cross into the United States to begin the process of applying for asylum.

Immigration lawyers are challenging the Trump administration's crackdown on asylum-seekers in court.

Under a sweeping new policy announced in June by Attorney General Jeff Sessions, the administration says domestic abuse and gang violence should "generally" not be considered grounds for asylum claims.

Now a lawsuit filed by the American Civil Liberties Union and the Center for Gender & Refugee Studies says that policy violates U.S. law by depriving asylum-seekers of the right to seek humanitarian protections.

The lawsuit filed late Tuesday in federal district court in Washington, D.C., was brought on behalf of a dozen plaintiffs who fled their home countries after suffering "horrific persecution," according to the complaint, including rape, beating, death threats and the murder of family members.

Immigration lawyers across the Southwest border have seen a sharp increase in the number of asylum claims that are being rejected at the earliest stage — what's known as the credible fear screening. And there are data to back them up. According to the TRAC Immigration Project at Syracuse University, the percentage of immigrants who pass the credible screening in court has plummeted since last fall.

That means many more immigrants will be quickly deported, without getting a chance to apply for asylum — even those, the lawsuit alleges, who truly fear for their lives.

"Every case has to be assessed on its own facts," says Jennifer Chang Newell, managing attorney for the ACLU Immigrants' Rights Project. "And under the new policies that the administration has issued, they're not doing that."

The lead plaintiff in the case is identified as "Grace" to protect her identity. According to the lawsuit, she fled Guatemala to escape an abusive husband who beat and sexually assaulted her for more than 20 years.

Under previous administrations, Newell says, Grace would have had a decent chance of staying in the U.S. "But now she's at risk of deportation to Guatemala where she fears for her life and her physical safety," Newell said.

The attorney general's June decision came in a closely watched case known as "Matter of A-B-," named for a Salvadoran woman who is seeking asylum in the U.S. That was followed last month by new guidelines for asylum officers who work for U.S. Citizenship and Immigration Services.

The Trump administration argues that many asylum-seekers are gaming the system by exaggerating their fear of going home.

"Many of those seeking to enter this country illegally and the smuggling organizations who profit from them know that a few key words are all it takes to get an alien through this screening process," said Lee Francis Cissna, the director of USCIS, during a hearing on Capitol Hill in May.

But immigration lawyers dispute that. They say Congress intended the bar for credible fear screenings to be low, so that immigrants aren't deported back to dangerous situations.

"In most cases, people are genuinely afraid," said Heidi Boas, a former asylum officer who now represents immigrants at the law firm Wilkes Legal LLC in Maryland. "They're having their one shot to tell somebody what happened to them, and then see whether they can move on to the next stage in the process."

Immigration lawyers worry that unless a federal court intervenes, many asylum-seekers will be deported before they get to the next stage in the asylum process. And that back home, many face the very real risk of violence, and even death.

To be eligible for asylum, an immigrant must show he or she faces persecution on account of race, religion, nationality, political opinion or membership in a particular social group. Over the years, immigrants' rights lawyers have pushed to expand the definition of particular social group to include women from countries where domestic violence is widespread and governments are unable or unwilling to stop it.

But the Trump administration is pushing back.

"Our nation's immigration laws provide for asylum to be granted to individuals who have been persecuted, or who have a well-founded fear of persecution on account of their membership in a 'particular social group,' " said a Justice Department spokesman in response to the lawsuit.

"But most victims of personal crimes do not fit this definition — no matter how vile and reprehensible the crime perpetrated against them," the spokesman said.