Accessibility links
To Syria And Back: How 2 Women Escaped Their Radicalized Husbands Few have returned to the U.S. after traveling to Syria and Iraq, where they were linked to extremists. Two are women who say their husbands forced them to go, along with their small children. 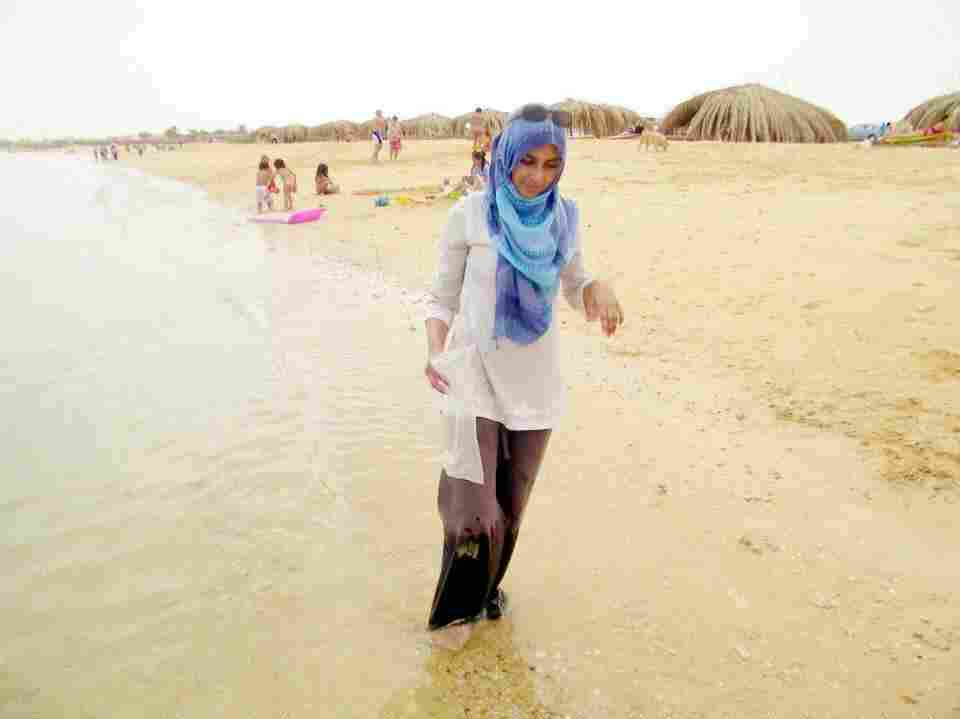 Tania Joya walks on the beach in Egypt in 2012. When her American husband John Georgelas joined the Islamic State in Syria in 2013, she fled with their children and returned to Texas, where she has built a new life. Courtesy of Tania Joya hide caption 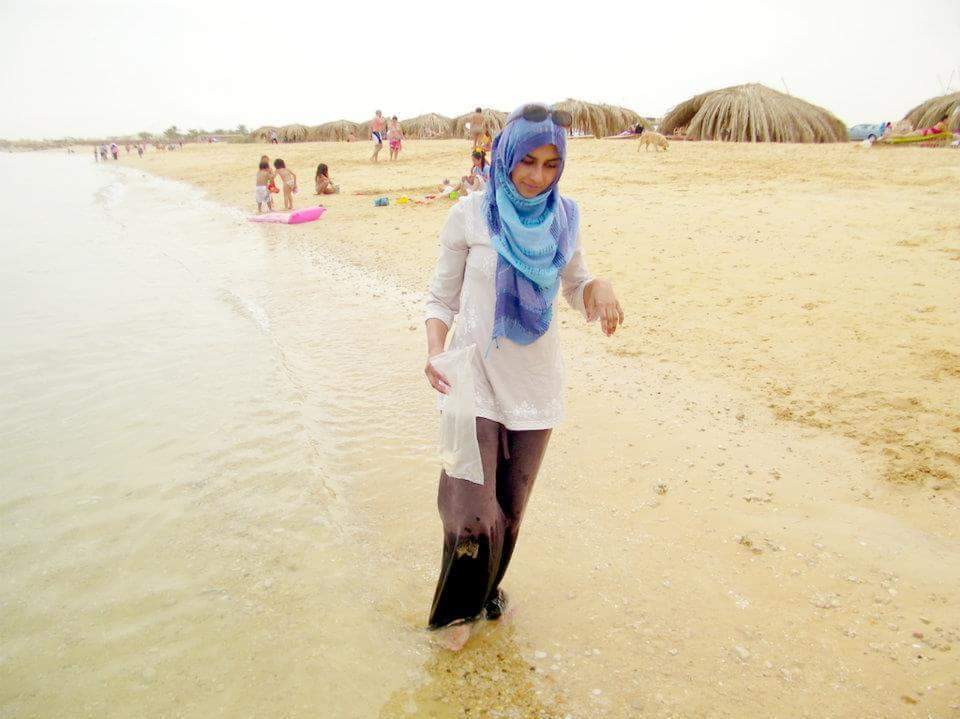 Tania Joya walks on the beach in Egypt in 2012. When her American husband John Georgelas joined the Islamic State in Syria in 2013, she fled with their children and returned to Texas, where she has built a new life.

By her own account, Samantha Sally had a comfortable life for years in Elkhart, Ind., with her Moroccan husband and their children.

But on a family vacation to Turkey in 2015, Sally says her husband, Moussa Elhassani, tricked the entire family into crossing the border into Syria.

She described that fateful moment in an interview with CNN last spring in Syria:

"The position I was in was to stay with my son or watch my husband leave with my daughter. I had to make a decision. I thought we could walk back across the border again," she said.

There, he declared he was joining the Islamic State. They moved to the city of Raqqa, which served as the Islamic State's de facto capital. She describes a nightmare that unfolded over the next three years, which included her 10-year-old son being forced to appear in an ISIS propaganda video.

Samantha Sally says her husband tricked her into going into Syria in 2015, where he joined the Islamic State. He's now dead, and she's in jail in Indiana. The PBS documentary series Frontline, working with the BBC, filmed the first interview with her and published it online back in April.

Cases involving the wives of extremists are complicated, says Christianne Boudreau. She's a Canadian who leads a group, Mothers For Life, that seeks to counter radicalization. She started it after her own son ran off to join ISIS and was killed in Syria.

"In some cases, the women made a conscious decision, and it was theirs, and theirs alone," said Boudreau. "In other cases, it's an abusive relationship. It's a very complex situation and it's very difficult to determine which of those two it could be."

Strange as it may sound, Samantha Sally's story is not unique.

Tania Joya, who lives outside Dallas, immediately recognized the parallels.

"I definitely can relate to her, being taken to Syria against my will," Joya said.

Joya is a British Muslim who moved to Texas 15 years ago to marry an American man, John Georgelas, who had converted to Islam. Both she and her husband were extremely devout. They strongly supported Islamic movements in general, which led them to move to Egypt.

By 2013, they had three young children and a fourth on the way. Her husband insisted they go to Syria, where he wanted to join the Islamic State.

Joya resisted, saying she believed the group was too extreme.

Her husband persisted. With great reluctance, she says she agreed to go for two weeks. When her husband then decided to stay, she fled with the kids.

She called U.S. authorities and asked to be allowed back into the U.S. She was, and still is, a British citizen, but her four children are American.

"Finally they said, 'OK. We want you back. You can come back, you know, on the condition that you tell us everything you know.' And I was absolutely happy to help because I wanted to get away from him," Joya said.

She moved back with her in-laws in Texas, cooperated with U.S. officials by providing information on the extremists, and was never charged with a crime.

Joya divorced her husband, who's still believed to be in Syria, though she's not in touch with him and doesn't know his exact whereabouts.

As she began to build a new life, she went on Match.com, with a very candid profile. 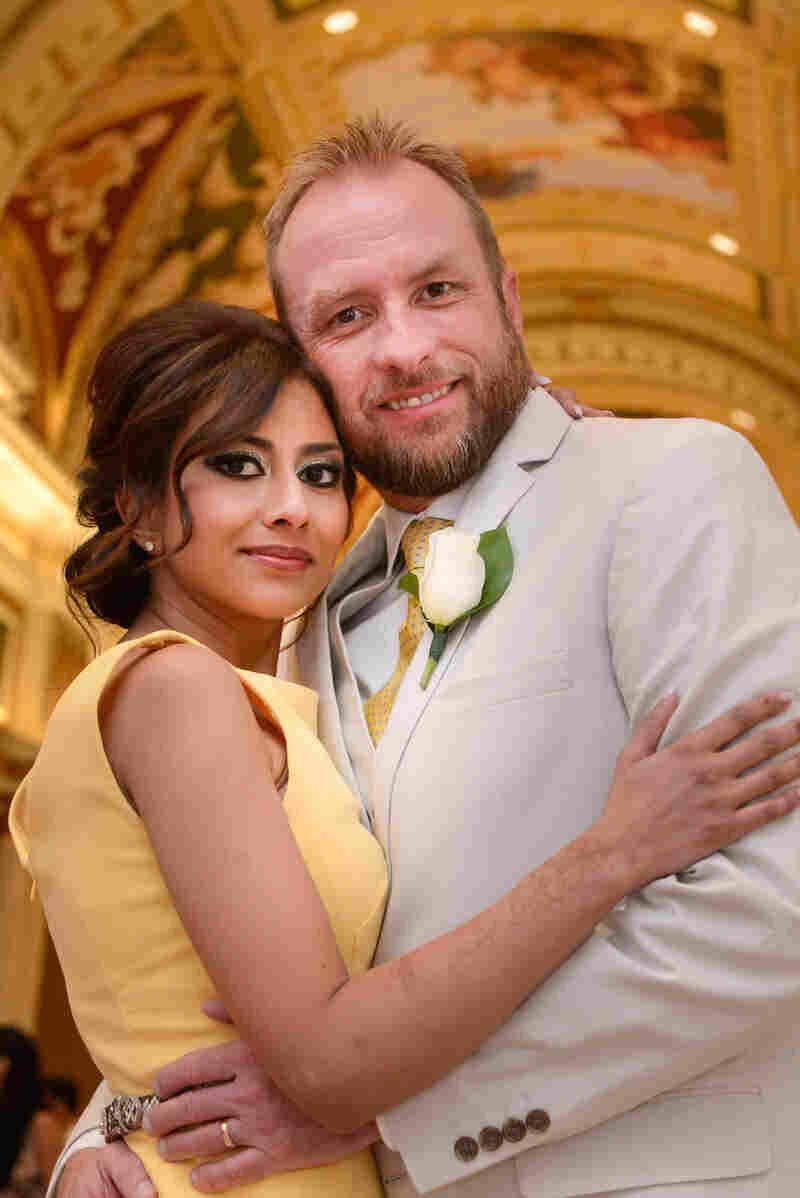 After she returned to the U.S. from Syria, Tania Joya divorced her first husband (not pictured), who is still believed to be in Syria. She went on Match.com, where she met Craig Burma. They married in June and live outside Dallas. Courtesy of Tania Joya hide caption 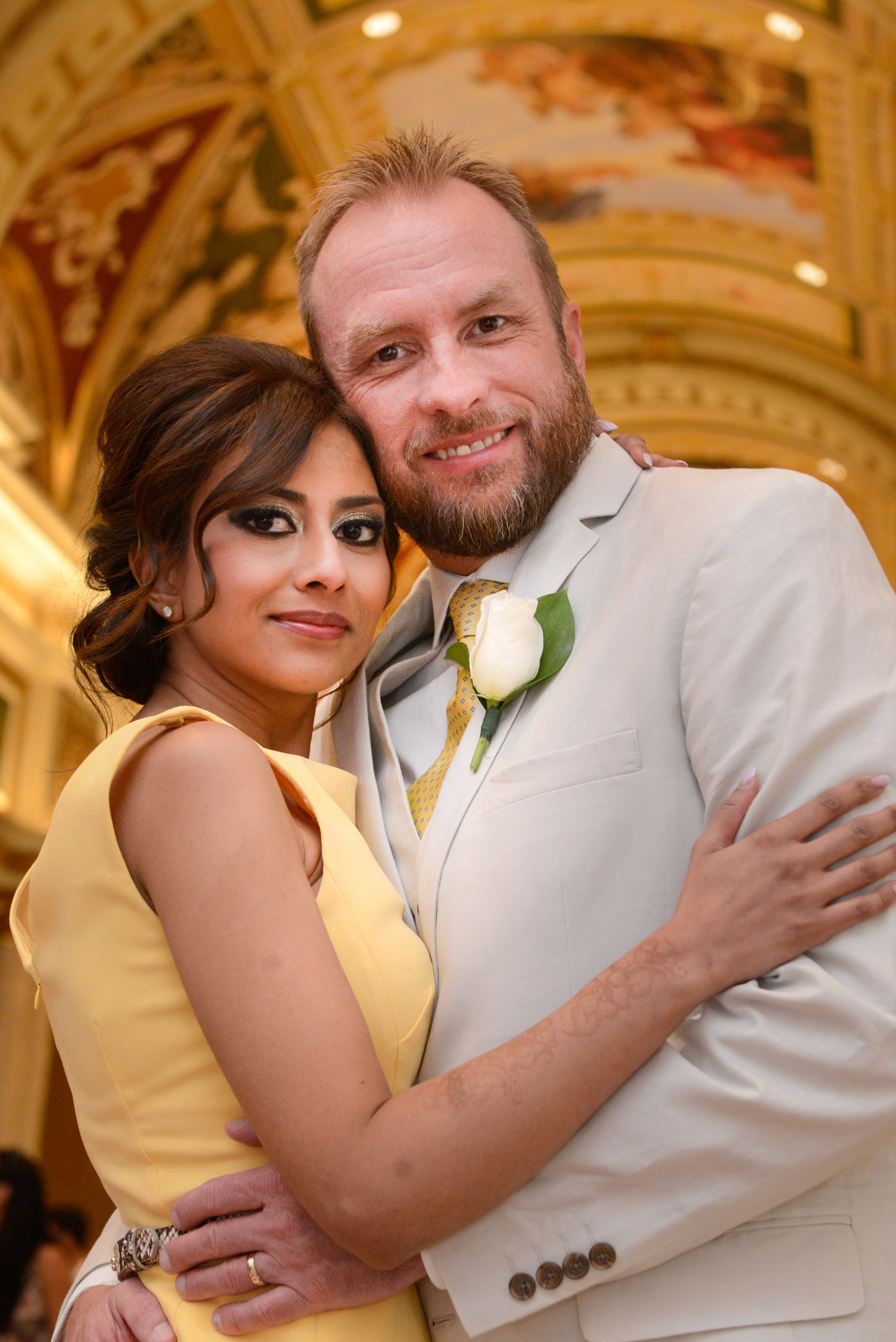 After she returned to the U.S. from Syria, Tania Joya divorced her first husband (not pictured), who is still believed to be in Syria. She went on Match.com, where she met Craig Burma. They married in June and live outside Dallas.

"I'm looking for a husband. I have four kids. I want someone older than me. My ex-husband's crazy. And I'm here applying for a Green Card," she said of her profile.

So how many guys responded to that?

About 1,300, she said. Match.com even sent her a note saying she had one of the "top 10 most reviewed profiles of the month."

"So I was quite pleased about that," Joya said.

Dating for the first time in her life, she learned a lot about male psychology.

One person who did read her profile was a man named Craig Burma. He and Joya married in June. The wedding photos show a stylish bride in a sleeveless lemon dress — a woman transformed from the one who used to wear a traditional Islamic hijab.

Happy endings are the exception for the roughly 70 Americans — almost all men — known to have traveled to Syria and Iraq to join up with extremist groups.

Some died on the battlefield. Of the 14 returnees to the U.S., 11 have been prosecuted, according to Seamus Hughes of George Washington University's Program on Extremism.

"Most come back disillusioned and disenchanted by their experiences in the Islamic State and they're very willing to cooperate with law enforcement," said Hughes.

He says this cooperation leads to reduced prison sentences. Those that have been convicted or pleaded guilty are, on average, receiving sentences of around 10 years.

Regarding the women who have returned to the U.S. and other Western countries, he said their versions need to be carefully checked.

"The argument is, 'I didn't know what I was doing. My husband tricked me. I was just a wife that was living in the Islamic State,' " said Hughes. "If you kind of peel back the onion, you realize that in the most cases there were active participants."

Returning to the U.S.

Samantha Sally says her husband, Moussa Elhassani, not only fought for ISIS, he bought two teenage girls as slaves and repeatedly raped them in their home.

She says her husband also abused her. She gave birth to two more children in Raqqa, and now has four altogether.

As the U.S. bombed Raqqa to rubble and the Islamic State crumbled last year, Sally's husband was killed in the fighting.

She and her kids were among the civilians allowed to leave the devastated city, and they wound up in northern Syria at a detention camp run by a Kurdish militia allied with the U.S.

The family was handed over to the U.S. military and flown to Indiana on July 24.

Sally has been jailed on a charge of making false statements to the FBI. But she has not been charged with supporting the Islamic State. The state of Indiana has custody of her kids, at least for now.

And there's one more twist in the case. Sally is charged with making the false statements to the FBI in Indiana on March 19, 2015 — which was before she and her family left for the Middle East later that year.

Neither the prosecution nor the defense is discussing the details. But the indictment strongly suggests that she and her husband were on the FBI's radar and were questioned before they left on the trip that took them to Syria.

"I'm not a psychiatrist, but if she's not suffering from post-traumatic stress disorder, I'll be surprised," said Tom Durkin, the lawyer representing Sally.

"We hope to be able to make some progress on getting her out so she can be reunited with her children," he added.

Her trial is tentatively set for September.