Accessibility links
For A Wracked World, Cursive's 'Vitriola' Returns To A Reckless Sound The world may be going to hell. But, while Cursive's forthcoming Vitriola wallops and revels in bleakness, Tim Kasher tells NPR that he's doing everything he can not to be swallowed up by the chaos.

For A Wracked World, Cursive's 'Vitriola' Returns To A Reckless Sound

For A Wracked World, Cursive's 'Vitriola' Returns To A Reckless Sound 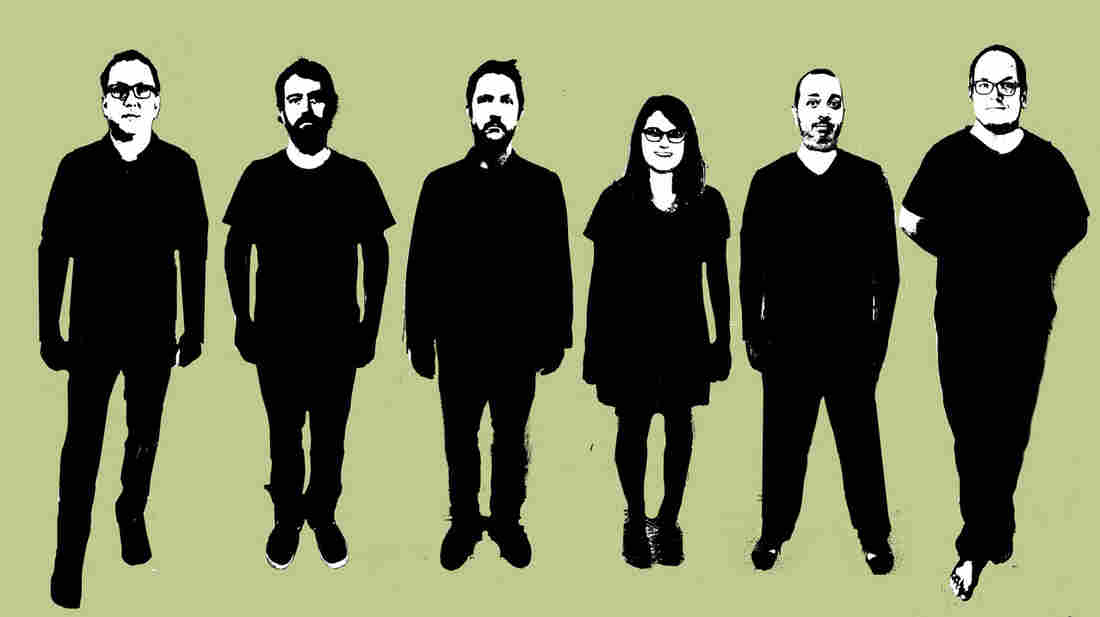 "I do feel like the nihilism that lives within me really reared its head on this record," Cursive's Tim Kasher (center) says of Vitriola. Courtesy of the artist hide caption 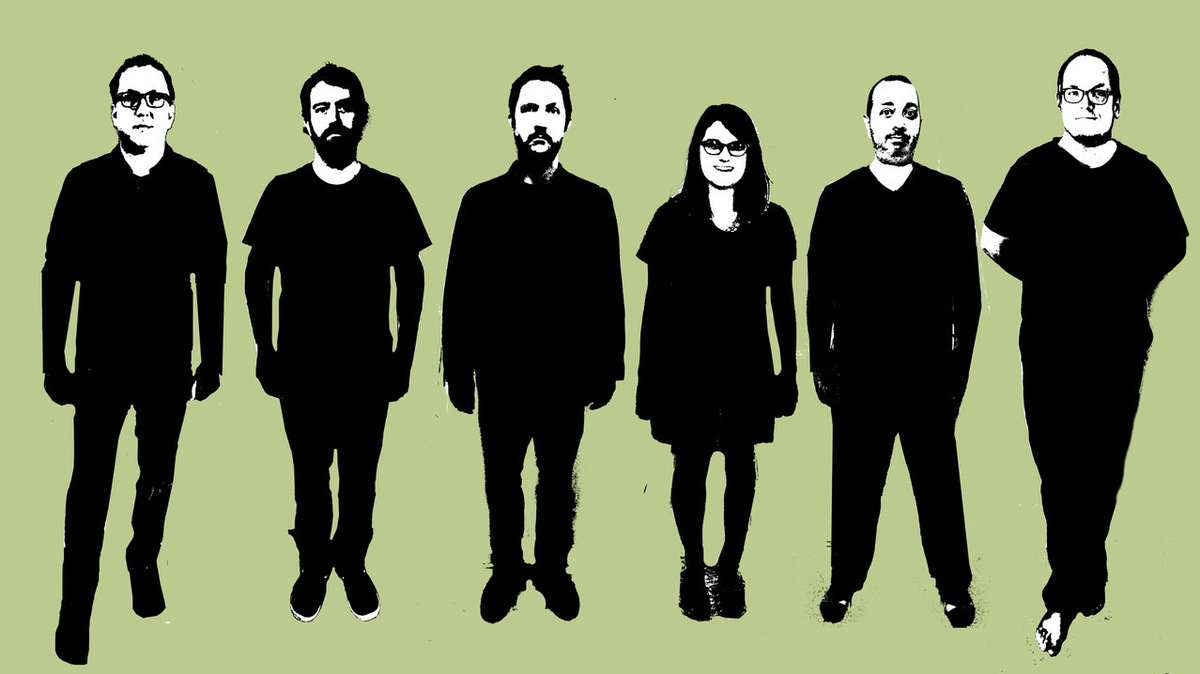 "I do feel like the nihilism that lives within me really reared its head on this record," Cursive's Tim Kasher (center) says of Vitriola.

The world is going to hell, and Tim Kasher is doing everything he can not to be swallowed up by the chaos.

For 23 years now, Kasher has funneled his darkest desires, righteous (and selfish) enmity and meta-commentary on artists and artistry into his abrasive and artful band Cursive, leaving a snarling, indelible mark on indie-rock in the process. Started in the early years of the Omaha-based Saddle Creek Records alongside bands like Bright Eyes and Lullaby for the Working Class, the singer's gut-wrenching yelp has inspired a rash of emo kids — who maybe couldn't hit the high notes, but regardless have made damn sure you felt every word. Kasher's lyrics dance on a knife's edge of earnestness and anxiety, leaning into one or the other (or both). Over the decades that anxiety has never gone away, as Cursive evolved into something more orchestrated, with songs that, rather than stab, bounce and sway. 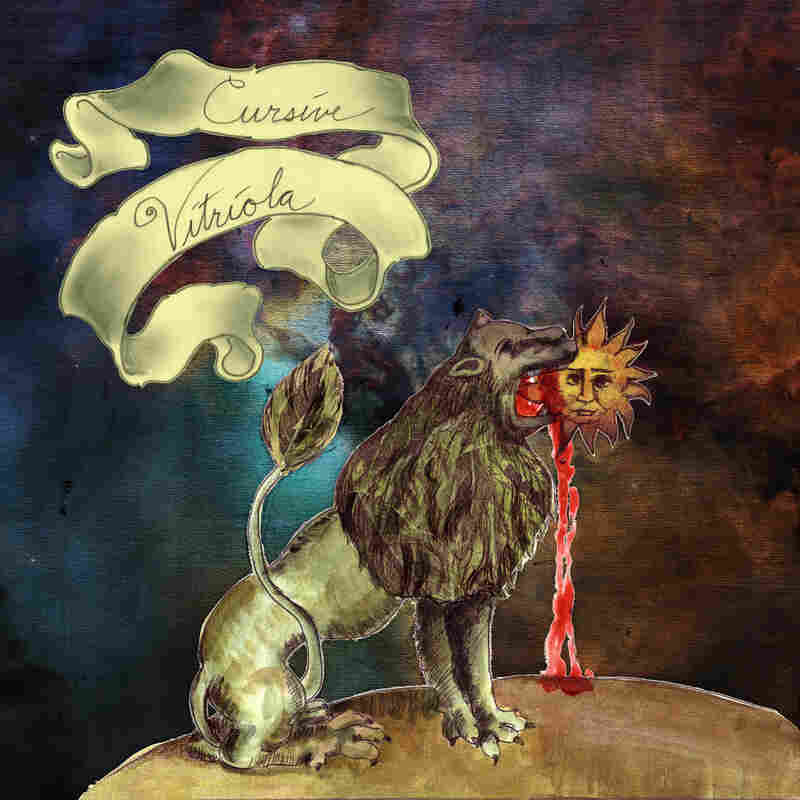 For Vitriola, his new record as Cursive — out Oct. 5 via the band's own 15 Passenger label — Kasher is returning to a sound not heard since 2000's Domestica or 2003's The Ugly Organ; an emotional turbulence marked by daggers of slanted guitar riffs and swooping cello, alongside a wracked rhythm section that spurs on the mania. Founding drummer Clint Schnase has returned to the fold, while touring member Megan Siebe is the first cellist to appear on a Cursive record since 2003, a dynamic rounded out by guitarist/singer Ted Stevens, bassist Matt Maginn and Patrick Newbery on keys.

"I was really wanting to go back to that raw emotional feeling that I used to get, how I wrote the first couple Cursive records when I was a younger man," Kasher tells NPR Music. "I would suggest that that was a little bit easier this time, with so much avarice and bile that we were all experiencing. [It] felt natural for me to just go with that."

For all of the high concepts built into most Cursive albums — Domestica with divorce, 2006's The Happy Hollow with organized religion, for instance — Kasher has instead centered around the theme of existential despair in a desperate time (a "poisonous concoction" is how he sums up Vitriola), responding to and being of it, without being beholden to the daily pummel of the feed.

Kasher is thinking about the last two years. Everyone is. He's filled with — yes — anxiety about this presidential administration and the widening schisms of American society; extreme economic disparity, the rising tide of open hatred towards minorities. He — we — are living on raw nerves, and there is a way for art to respond in kind, directly at an opponent with specific, but crafted, language.

Frankly, we all want to scream, 'F*** you.' Those lyrics are so easy to write.

"I really had to keep reshaping the message of these songs until I could get to a place where I felt like it was showing instead of telling," Kasher says. "There were too-specific lyrics that would really place us into 2018. I didn't want to come off as redundant to whatever you read in the news today and now you're listening to some guy remind you of that. Frankly, we all want to scream, 'F*** you.' Those lyrics are so easy to write. I just spent a lot of time refining until I got to a place where I felt like the album could be its own entity and not just some like some addendum to the daily news."

Vitriola, then, is not meant as a pane of glass through which to interpret constantly nightmarish headlines, but a reflection of collective pain. (We could map our socio-political frustrations onto Drive-By Truckers' American Band and Priests' Nothing Feels Natural, but these were records written and released before and during the election.) It's only now that we're seeing the fruits of artists' pained labor, the last two years distilled into calls for empathy (Courtney Marie Andrews' May Your Kindness Remain), action (Downtown Boys' Cost of Living) and proclamations of self-love (Janelle Monáe's Dirty Computer). Vitriola, in lemon-sucking language that doesn't want to make lemonade, aims for catharsis, knowing this constant barrage is "gonna hurt / But you do it anyway," as Kasher yells on "It's Gonna Hurt."

The record wallops a blunt-force bleakness into its 45 minutes, bordering on existential sadism. "What reason do you need to be alive?" Kasher asks in "Free To Be Or Not To Be You and Me," the album's scathing opener. "Just merely survive / Or don't — you are or you aren't."

There is a dire search for meaning that turns dark quickly, a fact not lost on Kasher.

"It actually kind of makes me feel emotional even talking about it," Kasher says. "I do feel like the nihilism that lives within me really reared its head on this record. That's something that, yes, I do attempt to keep at bay, because I prefer to be more positive and open-minded. And this time around I feel like I failed that — maybe I shouldn't say failed, but I allowed more of that nihilistic belief to seep into the music, which is very upsetting for me. I'm not really doing my part to buoy humanity when I'm just sitting so hard on it, you know? But these are our feelings and that's the catharsis I ended up choosing. I also hope listeners will experience that as well."

But for all of Vitriola's grim outlook, there is also a more positive notion central to the record: We are all in this mess together. On "Life Savings," a pretty brutal evisceration of capitalism, as the bass and cello chug in bruising tandem, Kasher sings, "Money buys a bright future / But we will be forever indentured — money, money / May we never get what we deserve — money money." It's classic Cursive, with psychic nails of sound and Kasher's righteously spit anger, enriched by a guitar melody that breaks apart the rage. But for all of its — ahem — vitriol, there's a disquieting moment that challenges both his and our frustration, by making it personal.

Underneath the bathroom sink
In a wooden box with a broken lock
You can find my life savings
A high school ring and baseball cards
And when this horror's over
And the greenback's all but trashed
Currency will be our head and hands —
So, you don't want to lose your head

You can't afford to lose that

It's a twisted message of hope in Vitrolia, as the world goes down in a hot garbage island of bile. You just have to scream along.

"I wanted people to focus on that exchange in the quieter moment of the song," Kasher says. "You try so hard your whole life, being put into the rat race ... I'm trying to find some kind of remedy for all of this, all of those troubles by saying, 'You know what? At the end of the day, we won't have much, but we'll be okay.'"

"It was still important to me to put in a glimmer of hope to keep the whole thing from totally going off the rails," he says. "That's truly how I feel. If I truly felt nihilistic, I don't think I'd be be doing any of this."