Accessibility links
John Cho And Aneesh Chaganty On 'Searching' : It's Been a Minute with Sam Sanders It's Tuesday: recorded live at The Line Hotel in LA, actor John Cho and director Aneesh Chaganty talk about their Sundance award-winning film, 'Searching,' the role of technology in our lives, and the responsibility and pressure of representation. Tweet @NPRItsBeenAMin with feels or email samsanders@npr.org.

Searching is a film of firsts.

For starters, first-time director Aneesh Chaganty set out to do something he hadn't seen before. While found-footage films like The Blair Witch Project, Paranormal Activity, and Cloverfield have played with audience perception via technology, Aneesh didn't put his audience behind the lens. He put them in the screen. The action of every shot appears as if viewed through a computer or cell phone screen, bordered by familiar digital interfaces of Facetime, Facebook, chat and video widows, etc.

In that sense, Aneesh told Sam, Searching is a "classic thriller told in an unconventional way." Classic, he said, because it's about a father, played by John Cho, looking for his daughter.

Both characters are Asian American, which brings us to another first — one that Aneesh and John did not intend. Searching has been heralded as the first mainstream, contemporary thriller starring an Asian-American actor.

"Honestly, I thought a movie like Crazy Rich Asians — that's the movie the Asian American community is going to go behind," Aneesh said, but added he understands the excitement.

In most films with Asian American actors, Aneesh said, "You usually have to explain — what is the Asian hook? Like, why is this family Asian?" But in Searching, he said, "there's nothing about this film that explains it."

In other words, Searching's Asian American cast isn't the medium or the message. The screens are both. John Cho is just the star.

Anjuli Sastry and Joanna Pawlowska produced the live show where this interview was recorded. Brent Baughman produced and edited the audio, and adapted it for the web. 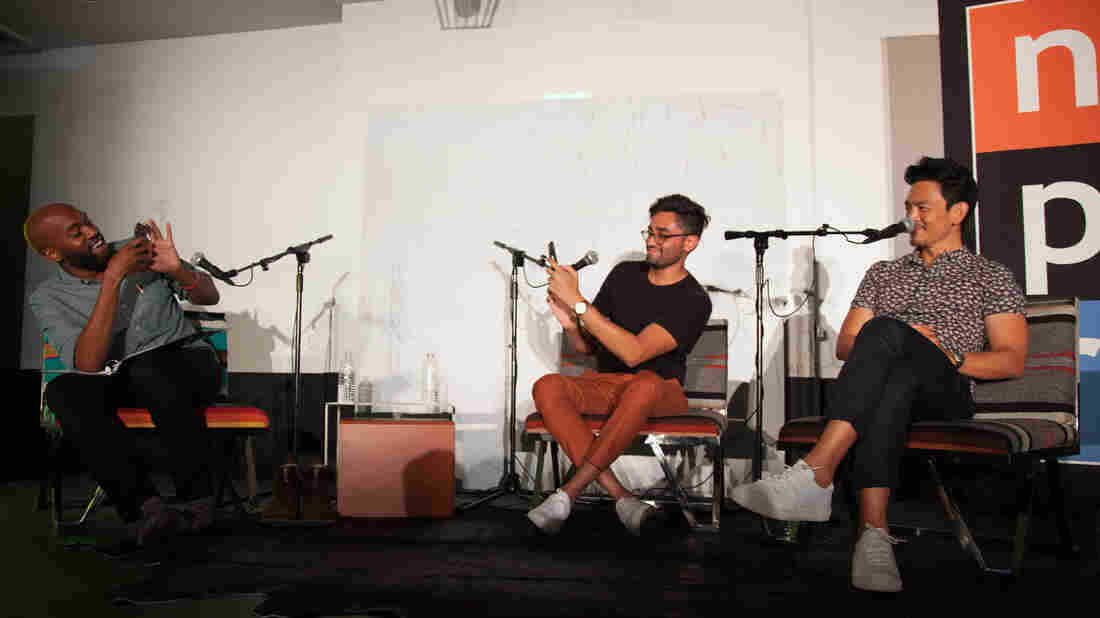 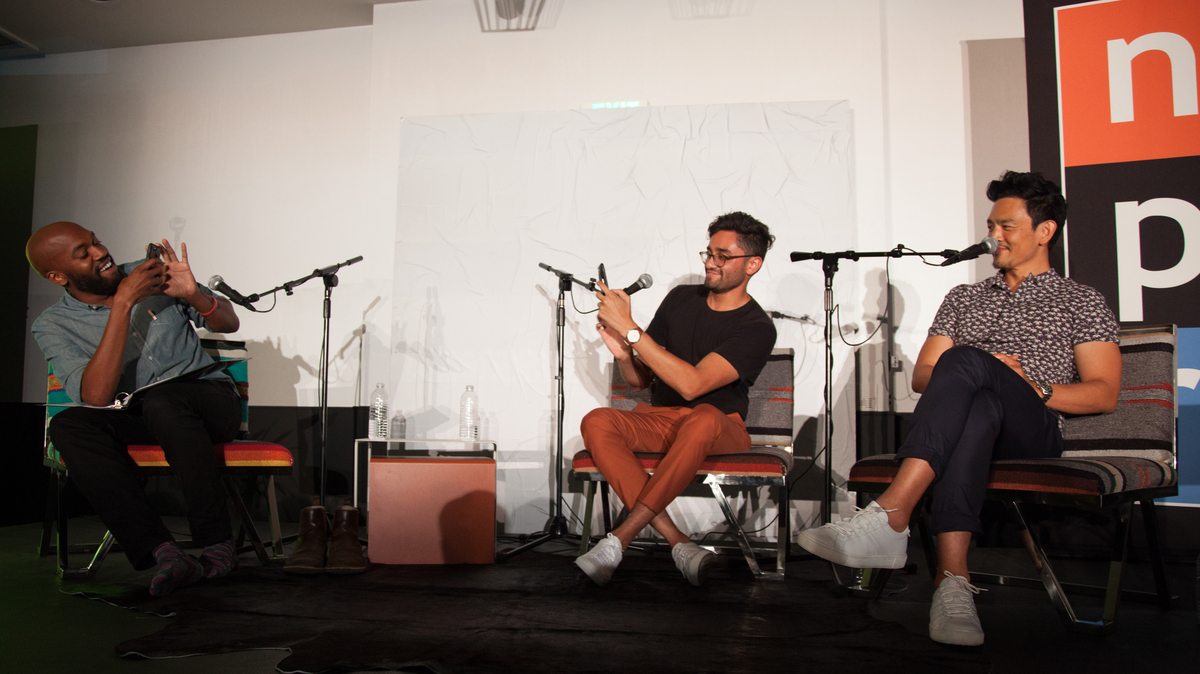 As Searching star John Cho (right) looks on, director Aneesh Chaganty (center) snaps a photo of Sam Sanders, who responds in kind, at The Line Hotel in Los Angeles on Monday, July 30.

On why Cho was initially hesitant to do the film

I said 'No' at first. I read the script and I loved the script. I love the story, I love the genre. It's a very classic, suspenseful thriller, but I said, 'why the screens?' And it was probably because, ironically, that Aneesh and I spoke over the phone — through a technological device — that we didn't really connect.

But to his credit, and to my luck, Aneesh didn't take my 'no.' He kept coming back. And so we had a meeting face to face, and two things happened. One, I was just really impressed with the person here. I said 'I think I'd like to follow this person.' And secondly, [Aneesh] assured me that what we were making, [was] something cinematic. It wasn't going to be a Youtube video. It was going to feel like movies that I grew up with, and he grew up with. And I think that's what we made.

Cho on being a father in real life, after playing a dad whose kid goes missing in Searching

My boy is ten, and I see what's coming down the pike. With these devices in your kids' bedroom, you used to say, 'Watch out for that pervert at the Seven-Eleven' or 'Don't get lost in the woods.' But it's like all the perverts and all the Seven-Elevens can come into your child's bedroom via these devices. 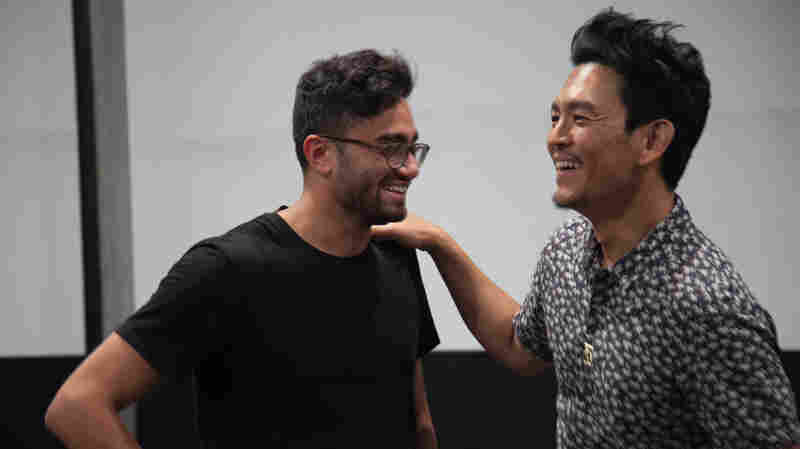 Actor John Cho and director Aneesh Chaganty at a live taping of It's Been a Minute at The Line Hotel in Los Angeles, on July 30, 2018. Johnny Pérez hide caption 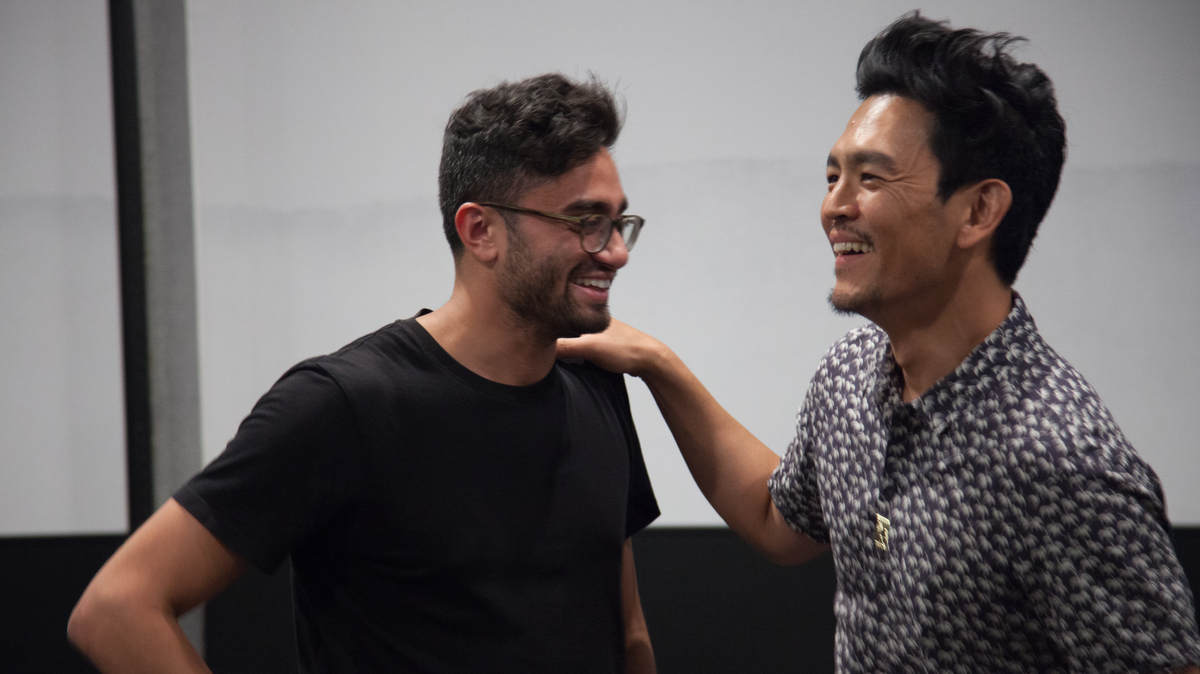 Actor John Cho and director Aneesh Chaganty at a live taping of It's Been a Minute at The Line Hotel in Los Angeles, on July 30, 2018.

Chaganty on growing up in Silicon Valley, previously working at Google, and now directing a movie about technology

People often assume when you see the trailer that it's anti-technology. It's not. This is probably the ex-Google employee in me speaking, but I think technology gets a bad rap in media. Whether we're watching Black Mirror episode or Facebook PSA or reading an article, it's always about how obsessed we are with our phones. How technology is the end of us.

What we wanted to do with our movie is zoom out and basically say, give technology a much more wholistic picture. And say like, it's like looking at a hammer and saying hammer is bad. As opposed to, hammer is bad, hammer is good, hammer is sad, hammer is whatever you want it to be — depending on how you use it. And for us, that's what this movie is about.

Cho and Chaganty on whether Searching is an Asian-American film

To me the thing that makes me want to claim it as an Asian-American movie is that it's an Asian family. Many times I've been the only Asian character in the movie, or actor. And this was particularly meaningful to see a whole Asian family, and one that loved one another. Sometimes the theme in a movie with a lot of Asians is that you're running away from your Asian-ness to find love outside of your culture. That doesn't compute in this. This is about fathers and mothers and children. So for that reason, I kind of want to lean into the yes of it.

CHAGANTY: I say no for the exact same reasons. Growing up, all of my favorite movies, the thrillers and the action movies the and mysteries and all those kinds of films, they just never had anybody that looked like me. And they still don't. I don't think I've ever seen an [Indian-American] person in these Hollywood action films. Those films never talked about race or culture or the color of your skin.

And we had an opportunity to do that here — to make a movie that had nothing to do with that. We found out the other day through a Vanity Fair article that this is the first mainstream, contemporary thriller to ever have an Asian-American lead in it. Which is cool and I think what has made it an Asian-American film is the fact that it is the first to do this.

This is a movie that can have anybody in it. And that was the point. ... Usually you have to explain what is the Asian hook. ... but there's nothing about this film that explains it. There's no justifying why we're here. It's just this is our movie. For us, it isn't, but by being it and by apparently being one of the first to do it, it has become that film. And it's something I'm proud of, but its intention is the end game. We don't have to justify why we're in a thriller.

Cho's advice to Chaganty about the pressures of representation in Hollywood

You're telling bedtime stories to boy-Aneesh, and you've got to make that kid smile. That's the job.