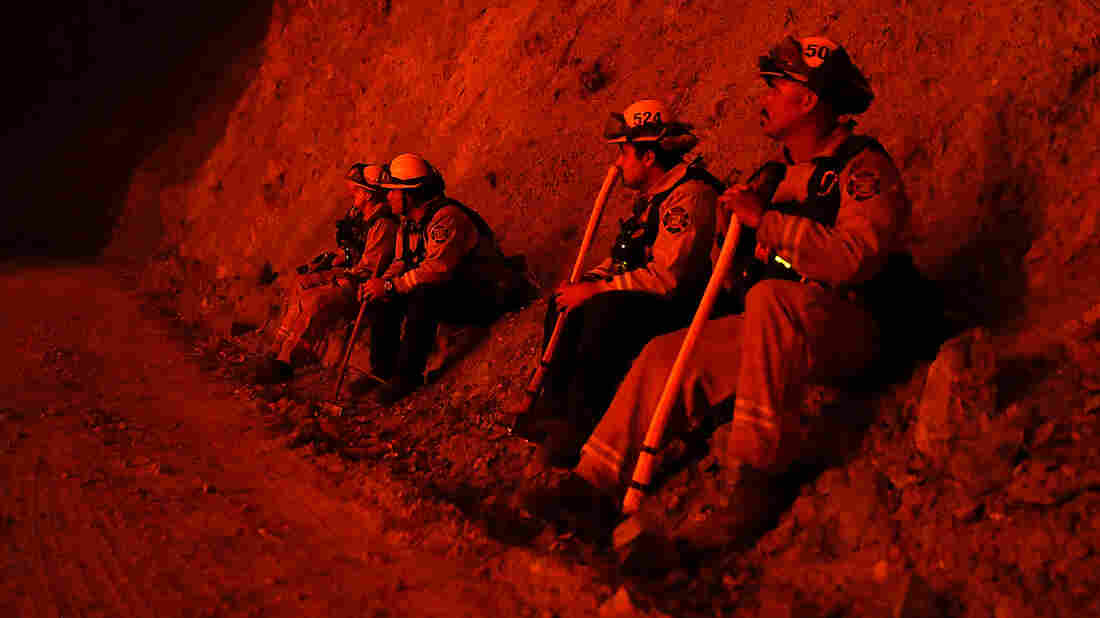 Firefighters monitor a back fire as they battle the Mendocino Complex Fire on Tuesday near Lodoga, Calif. Justin Sullivan/Getty Images hide caption 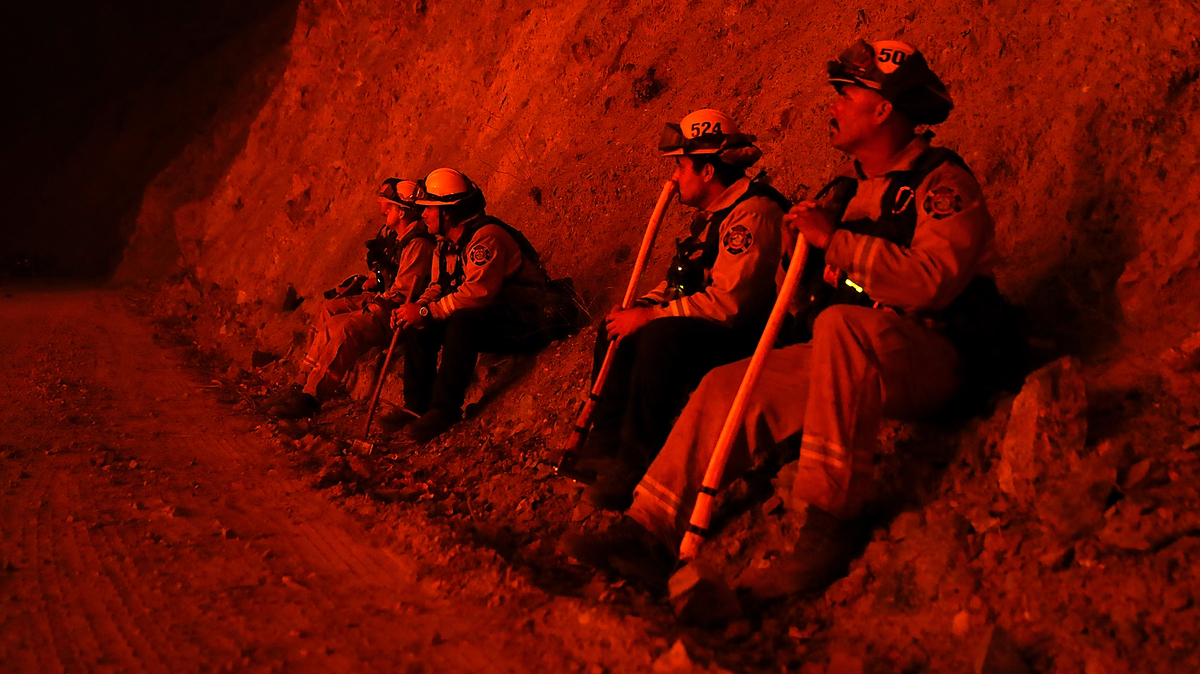 Firefighters monitor a back fire as they battle the Mendocino Complex Fire on Tuesday near Lodoga, Calif.

Officials in California are warning that it will likely be September before they are able to contain the Mendocino Complex Fire — the largest in the state's history that has already scorched an area the size of Los Angeles.

Cal Fire pushed back its estimate for containment by two weeks for the massive blaze, which is made up of the adjacent River and Ranch fires. Officials had previously anticipated full containment by Aug. 15, but now say it will be Sept. 1.

California is battling 17 major fires fueled by record-breaking heat and dead vegetation left over from a five-year drought – the worst in the state's history — that ended last year.

While somewhat smaller, the Carr Fire to the north near Redding, has been more destructive because of its proximity to urban areas. That fire has spread to 172,000 acres, or nearly 270 square miles and is 47 percent contained. The Carr Fire has killed six people, including two firefighters, and destroyed 1,000 homes.

Speaking to NPR's Morning Edition, Steve Kaufmann, a fire captain in Ventura County and one of the firefighters battling the Mendocino Complex Fire, says his most vivid image of the last few weeks has been "Seeing the evacuees of the fire and how they are impacted by the fire and living in these shelters."

Unfortunately, he says, that is becoming an all-too-familiar scene. "Every year since about 2015, they've had fires in Lake County," Kaufmann says.

Officials are increasingly worried that 2018 could be shaping up to be California's worst-ever fire season because historically the worst months for wildfires are yet to come.

The state is experiencing more, larger, and more destructive wildfires that come earlier in the season, a situation increasingly blamed on climate change.

"For whatever reason, fires are burning much more intensely, much more quickly than they were before," said Mark A. Hartwig, president of the California Fire Chiefs Association.

Gov. Jerry Brown warned last week that California was moving into "uncharted territory" and that the budget for fighting wildfires was being rapidly depleted.

"Since civilization emerged 10,000 years ago, we haven't had this kind of heat condition, and it's going to continue getting worse. That's the way it is," Brown said.

In a tweet on Monday, President Trump said the wildfires were being "magnified" by "bad environmental laws which aren't allowing massive amounts of readily available water to be properly utilized." He said the water was being "diverted into the Pacific Ocean."

California wildfires are being magnified & made so much worse by the bad environmental laws which aren’t allowing massive amounts of readily available water to be properly utilized. It is being diverted into the Pacific Ocean. Must also tree clear to stop fire from spreading!

According to The San Francisco Chronicle:

"Asked whether firefighters at the Carr and Mendocino Complex fires are short on water, California Department of Forestry and Fire Protection spokeswoman Lynette Round replied, 'Not that I'm aware of. ... but that doesn't mean it's not happening.'

But the tweet had LeRoy Westerling, a [University of California] Merced professor specializing in wildfire and climatology, chuckling.

'On the water side, it boggles the mind,' he said. 'We do manage all of our rivers in California, and all the water is allocated many times over. So I'm not sure what he was recommending.'"