Accessibility links
Ohio Special Election Lessons Both Parties Should Learn There were lots of takeaways from Tuesday's election, from whether Republicans should stand with President Trump or whether attacks on Nancy Pelosi work, to which issues really matter to voters. 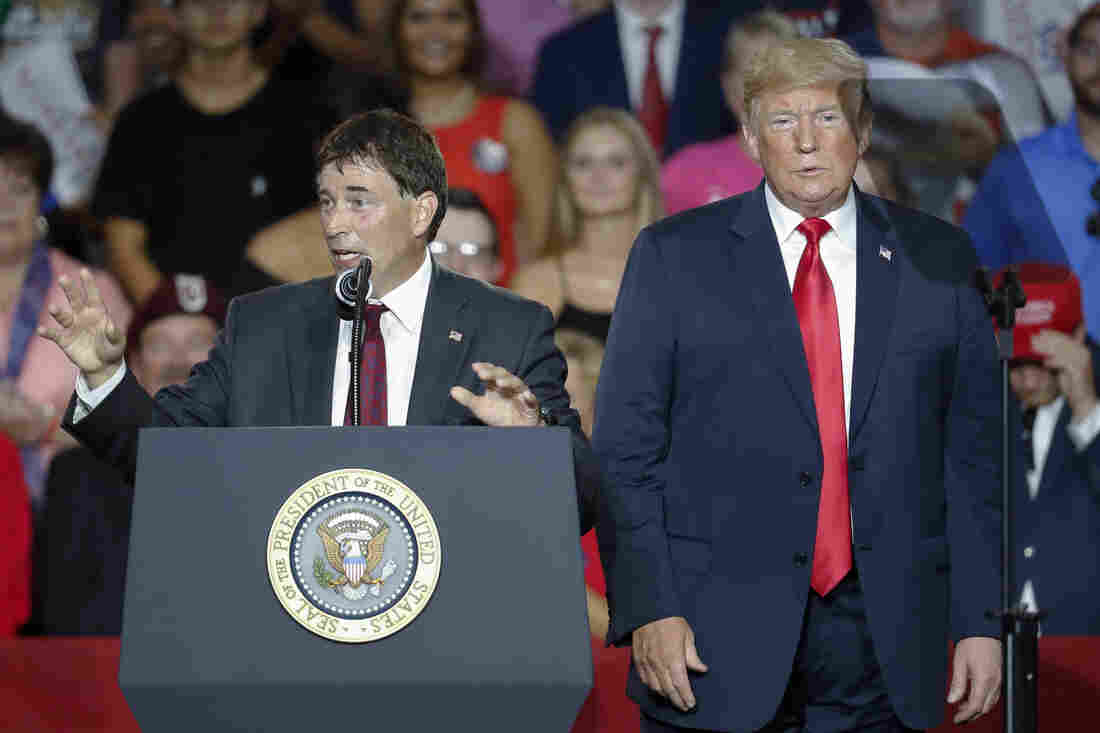 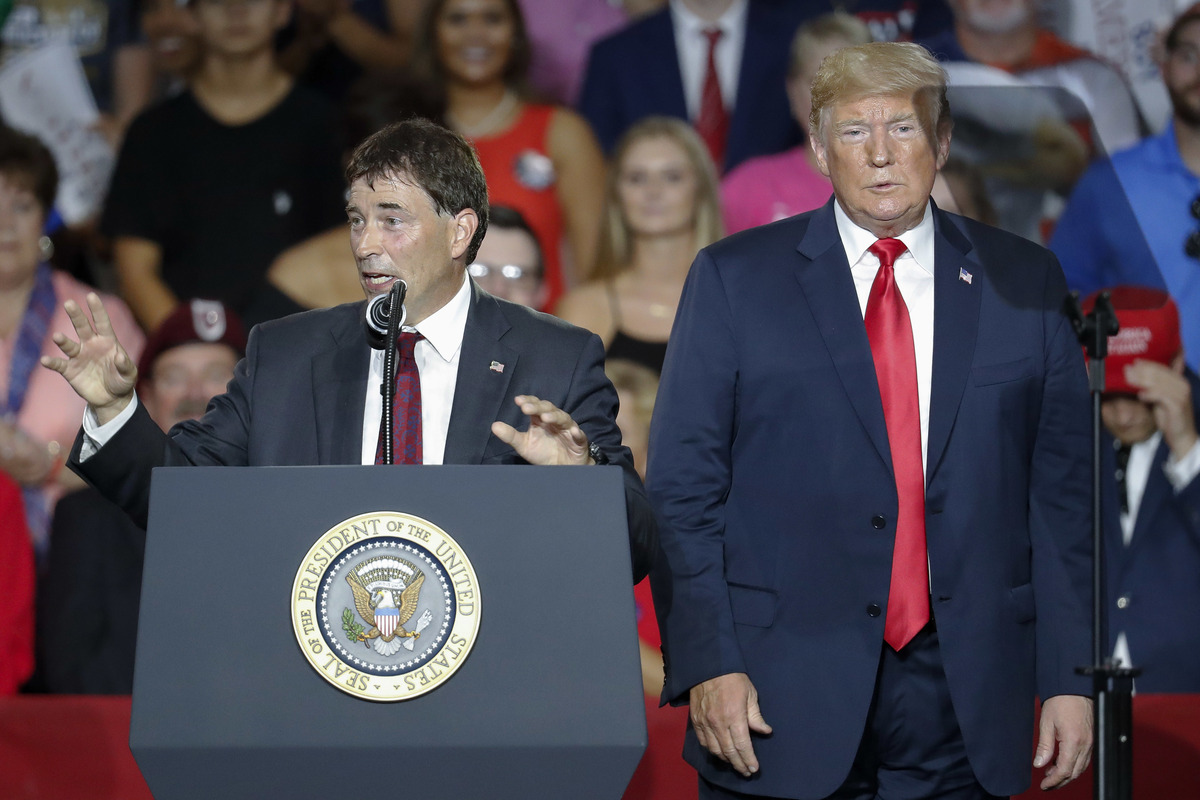 After spending millions of dollars in a special election in Ohio, Republicans pushed the boulder up the hill just enough to eke out a very small lead, and possibly hold on, in what unexpectedly became a competitive race.

"While we won tonight, this remains a very tough political environment, and moving forward, we cannot expect to win tough races when our candidate is being outraised," warned Corry Bliss, the executive director of the Congressional Leadership Fund, a PAC trying to help Republicans hold the House. "Any Republican running for Congress getting vastly outraised by an opponent needs to start raising more money."

Why the alarm bells – even after Republican Troy Balderson declared victory over Democrat Danny O'Connor in the 12th Congressional District special election? In part, it's because this district is not indicative of the kinds of places that will determine control of the House in November. It's far more conservative.

To quantify that point, consider that Democrats need to gain 23 seats to take back the House, and that there are 69 seats held by Republicans that either Trump won in 2016 by less than he won Ohio 12, or that Hillary Clinton won. The Cook Political Report, based on its own partisan ranking formula, finds that there are 72 GOP-held seats with partisan makeups that are equal to or more liberal than this district.

In other words, this should have been an easy win for Republicans.

"It's really kind of shocking, because this should be just a slam dunk, and it's not," Ohio Gov. John Kasich told ABC's This Week on Sunday.

Balderson leads Democrat Danny O'Connor by 1,754 votes. That's a lead of 0.9 percentage points. There are, however, some 8,500 provisional and absentee ballots still to be counted. If the gap were to shrink to within 0.5 percentage points, that would trigger an automatic recount. O'Connor would need about 55 percent of the outstanding provisional and absentee ballots to get within that margin. He would need a little over 60 percent to take the lead. The state has 10 days before those remaining ballots can be counted, according to the Ohio secretary of state's office.

Because of those remaining ballots, The Associated Press has not called the race yet. President Trump, on the other hand, declared a "great victory." Trump, who campaigned for Balderson on Saturday, gave himself credit for the win.

When I decided to go to Ohio for Troy Balderson, he was down in early voting 64 to 36. That was not good. After my speech on Saturday night, there was a big turn for the better. Now Troy wins a great victory during a very tough time of the year for voting. He will win BIG in Nov.

The outcome may not quite be clear from Tuesday night, but there are at least four lessons:

1. Trump puts Republicans in swing districts in a vise

Trump's support raises a question that was left somewhat more difficult to answer after last night's result – whether Republican candidates in competitive districts should abandon or embrace Trump.

Balderson took the latter approach. He appeared onstage with the president Saturday, where Trump heaped praise on him. Balderson has hugged Trump on immigration, saying on his website he will "protect Ohio's working class from illegal immigration" and "will fight alongside President Trump to deport those here illegally."

"The president has an ability to motivate base voters," Hunt said, but added that he believes voters care most about local issues.

The fact is: Republicans are in a vise when it comes to Trump. His approval rating is historically low, but his support with the GOP base remains strong. Without that base's support, it becomes nearly impossible for Republicans to win, especially in midterm elections when activists vote most. But to hold control of Congress, Republicans will also need independents and suburbanites turned off by the president in key districts.

2. The Trump Effect could mean high turnout in November

Are we now perpetually in base-election mode? In other words, how much do "swing" voters matter.

Trump is polarizing. And Republican and Democratic strategists acknowledge that Trump is driving turnout on both sides.

There has been lots of energy, higher than in past years, and the Trump Effect could portend higher-than-usual turnout this fall.

Hunt rightly noted on Morning Edition that special elections are not replicas of general elections. Outsize attention can be paid to them – and that can mean lots of outside money against underfunded candidates. That won't likely be the case in general elections against better-known incumbents with bigger war chests.

Still, for all the points Republicans will make about how local issues — or as Hunt put it, "unique factors" — matter most, a lesson they are drawing from this race is that attacks on Nancy Pelosi still work.

In the final weeks of the campaign, the Congressional Leadership Fund went back to that strategy, running this ad, blasting O'Connor on immigration and trying to tie him to Massachusetts Sen. Elizabeth Warren, Pelosi and "The Resistance."

That was a shift from the beginning of the race when Republicans were talking more about the tax cut plan. But an ad focusing on it was cycled off the air three weeks before Election Day, the Washington Post reported.

"Every vote for a Democrat is a vote to put Nancy Pelosi back in power," Hunt said of the Democratic minority leader who would like be speaker again if Democrats win the House.

That's one strategy, he believes, that can win over persuadable voters – not just fire up the base. Whether that strategy works is still an open question.

4. Social Security and Medicare are still the third rails of politics

There was one clear lesson Republicans in competitive to potentially competitive races likely learned from the Ohio special election, however — don't let anyone think you're going to cut Social Security and Medicare.

Attacks on Balderson that he would cut the entitlement programs resonated enough that he felt compelled to put up an ad vowing not to cut them alongside his elderly mother, who had an oxygen tube connected.

"I would never do anything to cut Social Security and Medicare," Balderson says in the ad. "My own mom and dad depend on both."