Accessibility links
Argentina To Decide Fate Of Landmark Bill Legalizing Abortion The legislation, which allows abortion before 14 weeks of pregnancy, passed the lower house of Congress by a slim margin. Now senators are debating it — and demonstrators are massing in Buenos Aires. 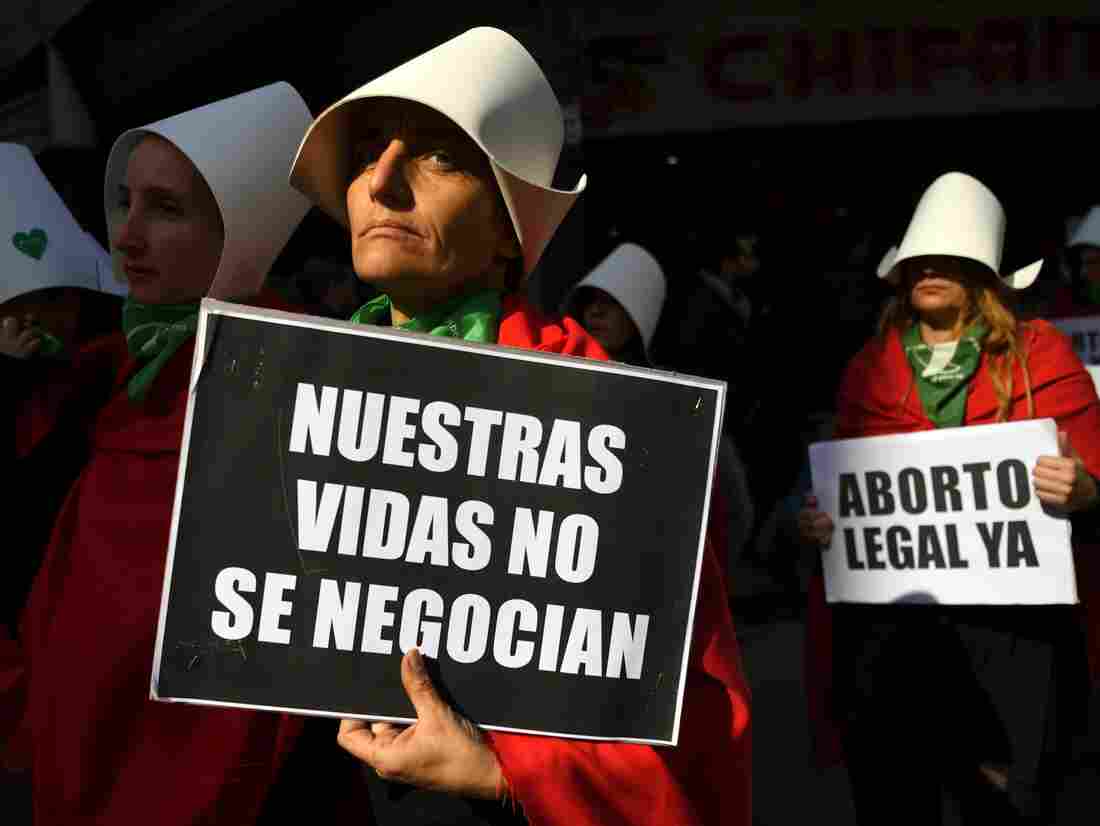 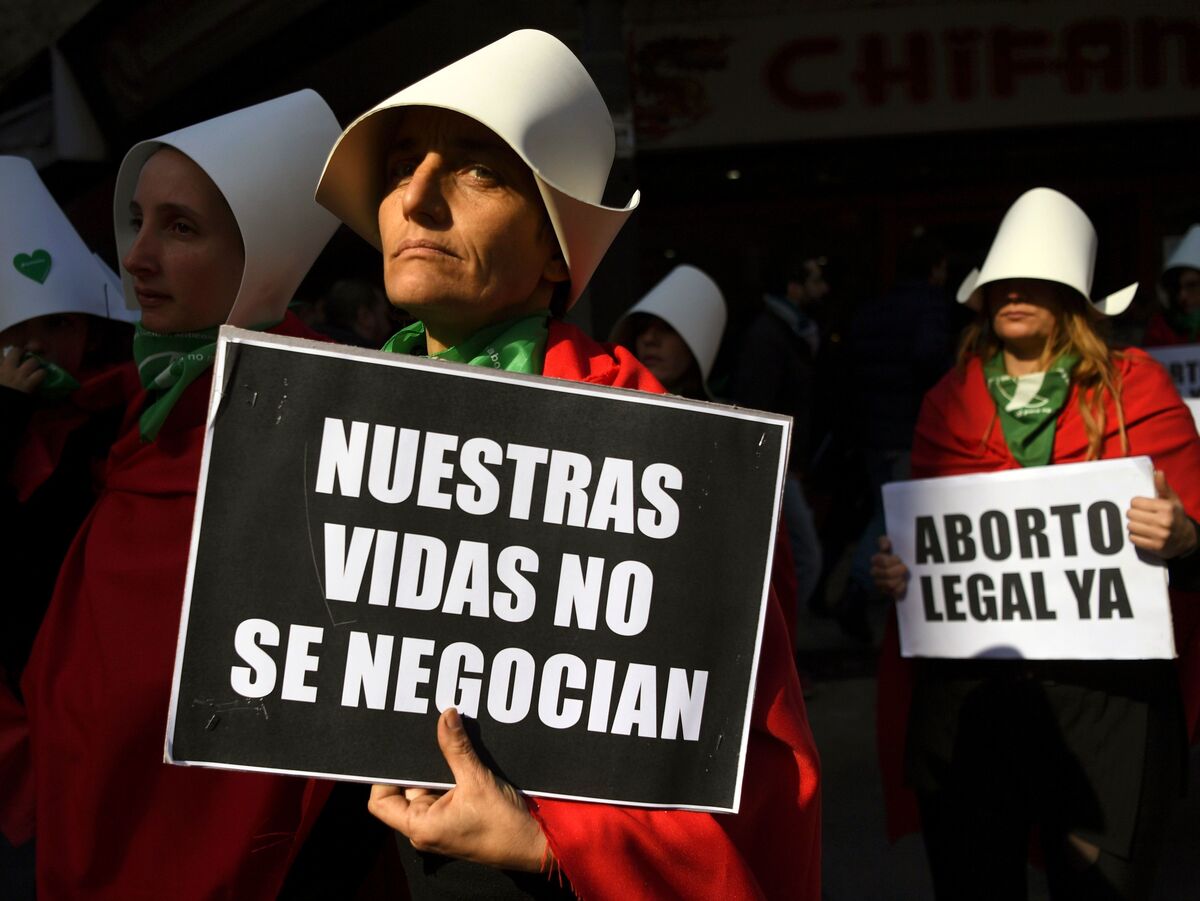 Abortion-rights supporters demonstrate earlier this month outside the National Congress in Buenos Aires, adding the legalization campaign's distinctive green handkerchiefs to outfits alluding to the dystopian novel The Handmaid's Tale. The book's author, Margaret Atwood, has said she drew inspiration from Argentine history.

A deceptively simple hashtag has climbed to the top of Twitter's trending lists across Argentina: #EsHoy, or "It's Today." The phrase, imbued as it is with fervent expectation, may seem puzzling to outsiders — but inside the country, the meaning is crystal clear.

"Today" is the long-awaited day that Argentine senators gather to debate deeply divisive legislation that would legalize abortion for pregnancies up to 14 weeks.

Nearly two months after lawmakers in the country's lower house of Congress approved the bill by a slim margin, senators will decide whether to send the bill on to President Mauricio Macri — who, despite his personal misgivings, has said he would sign it into law. The move would significantly ease the country's abortion laws, which allow the procedure only in cases of rape and risks to the mother's health, and would make Argentina the most populous country in Latin America to legalize abortion.

The bill's backers argue that it is a crucial step for a country that despite its ban sees an estimated 500,000 clandestine abortions yearly. And the secrecy of those procedures is a major problem, according to Amnesty International. The human-rights group says that over the past 30 years, complications from risky abortions have accounted for a third of the maternal deaths in Argentina.

"Abortions are done and thousands of women die clandestinely. The debate today is: legal or illegal," Sen. Norma Durango, a supporter of the measure, said during debate on the chamber floor Wednesday. "This law does not obligate or encourage anyone to have an abortion; it defends the right to choose."

The bill's passage is far from assured, however. 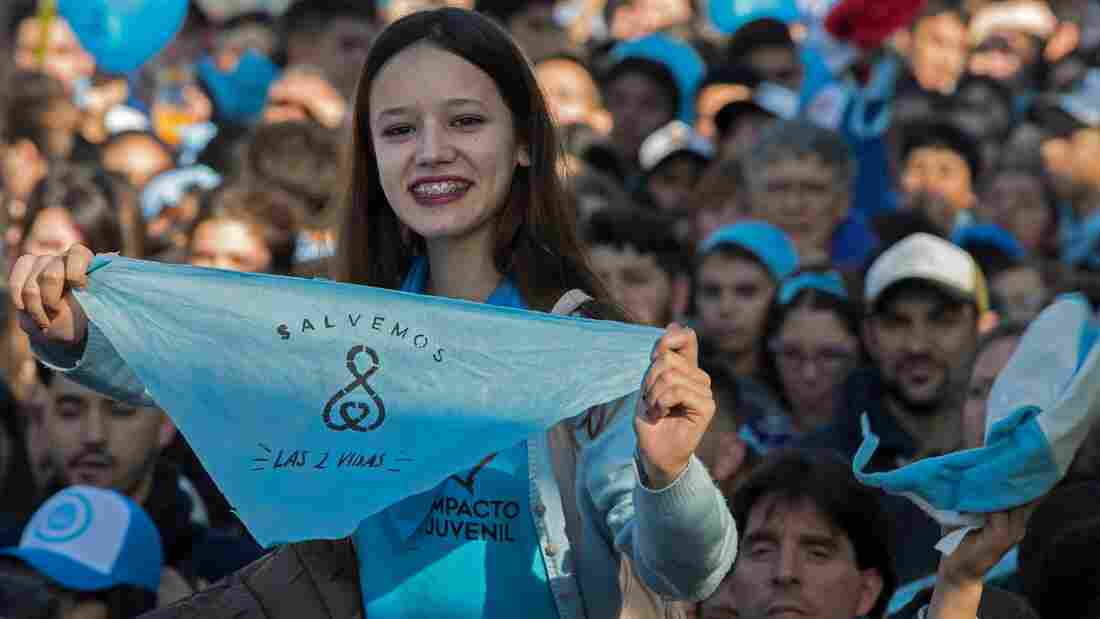 Anti-abortion demonstrators gather last weekend in Buenos Aires, in a rally organized by the Christian Alliance of Evangelical Churches in Argentina under the slogan "Let's Save Both Lives." Alejandro Pagni/AFP/Getty Images hide caption 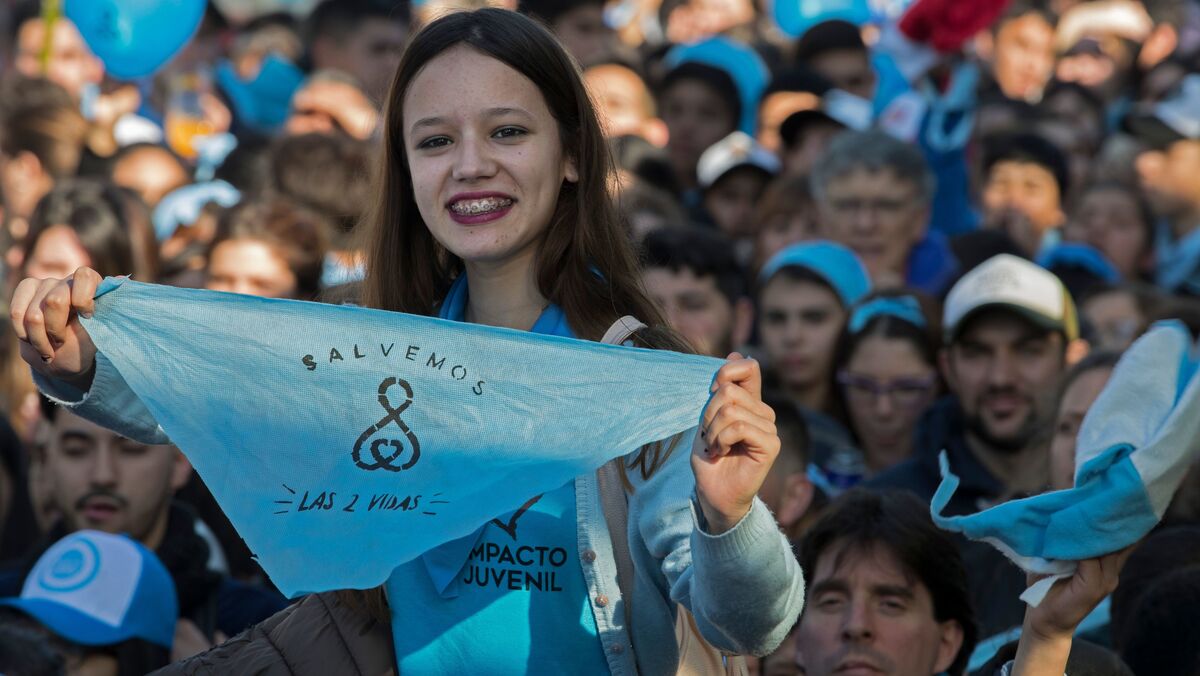 Anti-abortion demonstrators gather last weekend in Buenos Aires, in a rally organized by the Christian Alliance of Evangelical Churches in Argentina under the slogan "Let's Save Both Lives."

In fact, since the Chamber of Deputies passed the measure by a 129-125 vote, several members of the 72-seat Senate have come out publicly against it. A majority of senators — 37 by the latest tally — had declared their intention to vote no before the body even convened for debate Wednesday.

Sen. Silvina García Larraburu, the most recent lawmaker to reverse course, explained to local media earlier this week that her decision "has to do with my most intimate convictions."

The predominantly Catholic country, homeland of Pope Francis, has seen a big pushback against the measure since its passage in the lower chamber — including from Francis himself reportedly. Local media say the pontiff, who has publicly expressed his deep-seated opposition to abortion, pressed Argentine lawmakers privately to persuade their colleagues to reject the legalization effort.

And though Macri has expressed his willingness to sign the bill into law, his vice president, Gabriela Michetti, recently said she wished things were actually heading in the other direction. Speaking with the conservative daily La Nación, Michetti said she would like to see a return to an outright abortion ban in all cases — something Argentina has not seen since 1921, when it adopted the law's exceptions.

Obviously, though, the debate has not been confined to the politicians.

Dueling rallies have descended on Buenos Aires in recent days, with backers of legalization donning their distinctive green bandannas and its opponents responding with blue scarves of their own.

As Argentina’s Senate starts debating the abortion bill, thousands start to arrive outside. On the left of this picture, those against legalisation. On the right, those in favour. #abortolegal #buenosaires #argentina pic.twitter.com/yTLIjRWtNn

Several times since June's lower chamber vote, droves of demonstrators have donned outfits alluding to The Handmaid's Tale. The dystopian novel's world of absolute female subjugation partly owes its inspiration to Argentina's past, according to author Margaret Atwood, who referred to the tens of thousands of forced disappearances carried out by the country's former military junta.

"For instance, the generals in Argentina were dumping people out of airplanes," she told the Los Angeles Times last year. "But if it was a pregnant woman, they would wait until she had the baby and then they gave the baby to somebody in their command system. And then they dumped the woman out of the airplane."

The Canadian novelist herself has repeatedly waded into Argentina's abortion debate in support of the bill.

Why should women in #Argentina be forced to carry a fetus that is already dead + septic? https://t.co/9alXHxy5yM This is not Right to Life but a sadistic Rite of Death. #QueSeaLey #SenadoresQueSeaLea @anaecorrea @hindeli Senators, please change this unjust & death-dealing law.

On Wednesday, demonstrators once more filled Buenos Aires' streets — with some supporters of the bill saying more than 1 million people may attend the planned vigil outside Congress. More demonstrators on both sides are expected to mass outside Argentina's embassies worldwide.

If the bill should overcome its long odds and gain passage, it will place Argentina in some rare company among traditionally conservative Latin American countries, joining Cuba, Uruguay and Guyana as the few to legalize elective abortion.

Protesters on both sides may have to wait a bit for that answer, though.

Lawmakers in the Chamber of Deputies needed nearly 24 hours of debate before voting. Amid the heated words and high stakes, it is also unlikely senators will reach a quick conclusion.