Accessibility links
'Lies My Teacher Told Me,' And How American History Can Be Used As A Weapon James Loewen's 1995 book explained how history textbooks got the story of America wrong. Now, in a new edition, Loewen champions critical thinking in the age of fake news. 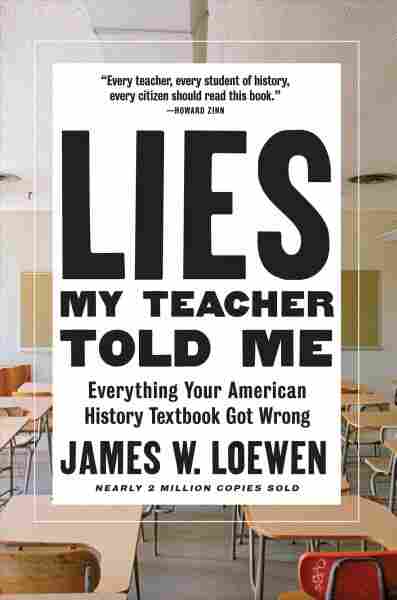 Lies My Teacher Told Me

Everything Your American History Textbook Got Wrong

When I was a high school junior in New Orleans taking AP American history, my teacher assigned us a paperback book. Slim in contrast to our hulking required textbook, it was a funny, compelling, even shocking read. Lies My Teacher Told Me, by James Loewen, explained how history textbooks got the story of America wrong, usually by soft-pedaling, oversimplifying and burying the thorny drama and uncertainties of the past under a blanket of dull, voice-of-God narration.

The book also taught a lot of history. It introduced me to concepts that still help me make sense of the world, like the "racial nadir" — the downturn in American race relations, starting after Reconstruction, that saw the rise of lynchings and the Ku Klux Klan. In doing so, Lies My Teacher Told Me overturned one assumption embedded in the history classes I'd been sitting through all my life: that the United States is constantly ascending from greatness to greatness.

The book has racked up many awards and sold around 2 million copies since it was first published in 1995. In a new edition out this summer, James Loewen — now professor emeritus of sociology at the University of Vermont — is championing the cause of critical thinking in the age of fake news.

He tells NPR, "I started out the new edition with the famous two photographs of the inaugural crowds of this guy named President Obama, his first inauguration, and this guy named President Trump, his first and maybe only inauguration. And you just look at those two photos and they're completely different. There's all kinds of grass and gaps that you see in the Trump photo. ... What that does, I hope, is signal to every reader of the book: Yes, there are such things as facts here. You can see with your own eyes."

The following conversation has been edited for clarity and length.

Can you take me back to the original inspiration for the book?

My first full-time teaching job was at a black college, Tougaloo College in Mississippi. I had 17 new students in my new second semester [freshman sociology] seminar and I didn't want to do all the talking the first day of class so I asked them, "OK, what is Reconstruction? What comes to your mind from that period?"

And what happened to me was an aha experience, although you might better consider it an oh-no experience: 16 out of my 17 students said, "Well, Reconstruction was the period right after the Civil War when blacks took over the government of the Southern states. But they were too soon out of slavery and so they screwed up and white folks had to take control again."

My little heart sank. I mean, there's at least three direct lies in that sentence.

Second, the Reconstruction governments did not screw up. Across the South without exception they built the best state constitutions that the Southern states have ever had. Mississippi, in particular, had better government during Reconstruction than at any later point in the 19th century.

A third lie would be, whites didn't take control. It was white supremacist Democrats — indeed, it was the original Ku Klux Klan.

So I thought to myself, "My gosh, what must it do to you to believe that the one time your group was center stage in American history, they screwed up?"

So you set out to write your own textbook, didn't you?

[Loewen, along with colleagues and students, co-wrote a new high school state history textbook called Mississippi: Conflict and Change. Despite high ratings from reviewers, the Mississippi State Textbook Purchasing Board rejected the book on the grounds that it was racially inflammatory. Loewen and his co-authors sued the board.]

The lawsuit had a "Perry Mason" moment — only your older listeners will understand what that is. Let's say it had a dramatic moment, and that came when John Turnipseed [of the Mississippi State Textbook Purchasing Board] was on the stand.

The judge — who was an [older] white Mississippian, but a man of honor — took over the questioning, and he said, "But that happened, didn't it? Didn't Mississippi have more lynchings than any other state?" And Turnipseed said, and again I quote, "Well, yes, but that all happened so long ago. Why dwell on it now?" And the judge said, "Well, it is a history book."

The U.S. District Court found for Loewen and the textbook was adopted for several years.

That whole escapade proved to me that history can be a weapon. And that it had been used against my students. And that's what got me so interested in American history as a weapon.

The book is called Lies My Teacher Told Me. What's the biggest lie in the book?

Usually when I'm asked, "What's the biggest lie?" I put my hand out in front of me slanting upward and to the right. And what I mean by that is the overall theme of American history is we started out great and we've been getting better ever since kind of automatically. And the trouble with that is two things. First of all, it's not always true. ...

So it encourages passivity.

And then the other part about it is the enormous textbooks. I mean, you talk about the way that they present history as being settled intellectually, too.

It's so boring! If you think about it, the very first thing that happened in terms of American history is people came to the land that we now know as the United States. Now how did they get here?

Well, every single textbook that I looked at says that they came across the Bering Strait during an Ice Age. It turns out they might have. It also turns out they might not have. And what we should therefore do is let students in on the fact that we don't know, that there's a controversy here and invite them to go research it themselves. ...

And that would be fascinating. That would get them thinking like a historian right from the beginning of a U.S. history course.

I feel like there is a tension in what you're saying because we do want to debate and understand where there's genuine uncertainty in history, but how do students discriminate among various sources of information? Especially in the age of the Internet and thousands of pages on any subject.

Well, I think there's one key question to be asked of any source, and that is "Why do you find it credible?" Now, a KKK site on American history is perfectly credible if you're asking the question "What does the KKK believe about the Civil War?" OK. If, on the other hand, you're asking, "Why did the Southern states secede?" Maybe you don't want to cite a KKK site.