Accessibility links
Spooky And Off-Kilter, 'Come Again' Shows Nate Powell's Virtuosity Powell is known for his work on John Lewis' autobiography March -- but his new graphic novel goes in a different direction, digging into family secrets and supernatural horrors in an Ozarks commune. 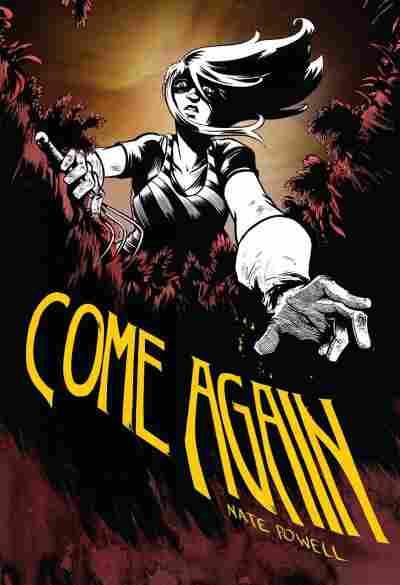 Earnest yet unpredictable, Nate Powell's graphic novel Come Again is a perfect example of what's possible when a creator roams outside of set conventions. Come Again fits no particular genre, though much of its style and tone resemble the slow-building, true-to-life narratives of Craig Thompson, Lucy Knisley and Mariko and Jillian Tamaki. But a touch of the mystical keeps this book off-kilter, raising the stakes on a story that might otherwise have seemed thin.

The mix is uniquely Powell — that is, to the extent it's possible to generalize about this prolific artist's diverse body of work. Powell is most often mentioned these days for drawing March, the National Book Award-winning history of the civil rights movement written by congressman John Lewis and Andrew Aydin. But that series' documentary realism is but one of Powell's modes. Come Again is a return to the spirit of 2011's Any Empire and 2008's Eisner Award-winning Swallow Me Whole, in which Powell mixed off-kilter elements into small-scale, deeply felt tales of human feeling.

A strong nostalgic tone is a Powell hallmark, too, and it's vigorously manifested in Come Again. Set in the 1970s, the story revolves around an "intentional community" in the Ozarks called Haven Station. The residents are committed to the values of communal, off-the-grid living in a bucolic spot far beyond "where the telephone lines stop ... past the last town with a square." Haven Station is both a representative of a long-gone era and a symbol of its decline. It was first established by 10 families, we learn, with that number swelling to 25 before dwindling to eight. "Some folks only stayed as long as the Snickers bars lasted," notes protagonist Hal (short for Haluska).

The community grows its own food, of course, as well as harvesting marijuana and Luna moth caterpillars to sell in the nearest outpost of civilization. ("[You can] raise your own Luna moth colony. Harvest their silk. We're oddly famous for the little guys," Hal explains.) Powell's expansive compositions evoke the sheer joy of summer days and nights in such a setting. There's lots of burgeoning foliage, and circling birds dot vast, open skies. Powell is good at drawing people with wide eyes, friendly faces and sturdy bodies. His characters beam happily as they hack away at the soil, tinker with much-mended gadgets and serve up chow in the Community Room.

But all is not as idyllic as it seems in Haven Station — at least, not from Hal's perspective. She's separated from, and on awkward terms with, the father of her son Jake. Though living in the tight-knit community means she's not raising Jake all on her own, she sees the downside of so much togetherness. "Most of us settled here to avoid the masses, the 'howdy-neighbors,' but it turns out, that's all you get," she says. "In a community like this, we are each other's business."

Few creators could envision a story as unique as 'Come Again,' and even fewer could have as much fun with it.

Hal's ambivalence about Haven Station has a specific nucleus: She's secretly sleeping with her best friend's husband. Their affair ultimately affects the lives of everyone in the community — and not just in the usual way, with people placing blame and taking sides. Without spoiling the story, let's just say Hal's actions stir up a mysterious force that impacts everyone profoundly. Powell has come up with a strange and unexpected series of events that are both diverting and symbolically relevant. It's a delight to accompany such a fertile imagination to the end of the narrative.

That imagination is evinced through visuals as much as words. A page seldom goes by without Powell playing with the possibilities of panel arrangement, line, shading and color (most of the book is black-and-white with warm pink accents, though yellow is dropped in to illuminate crucial elements). Even his lettering choices reflect a desire to push the limits wherever possible. Few creators could envision a story as unique as Come Again, and even fewer could have as much fun with it. For Powell, life outside the lines seems to come naturally.