Accessibility links
Rand Paul Goes To Russia And Delivers Letter For Trump, Marking Our Era Of Irony For those who take their cues directly from Trump, all tales of Russian influence and interference are distractions that border on being a conspiracy against the Trump regime. 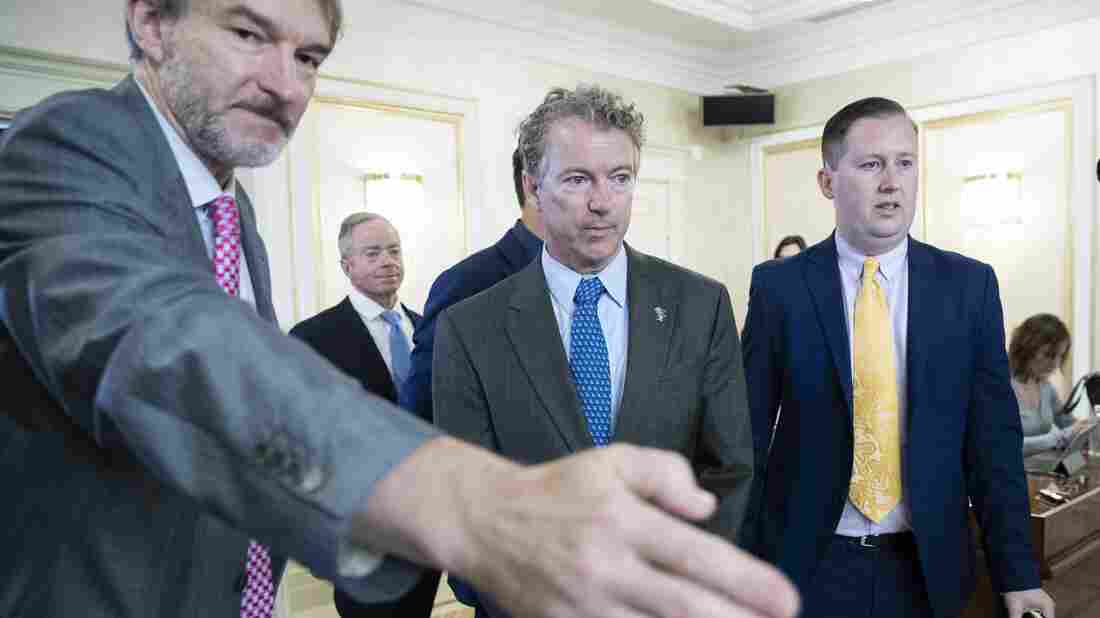 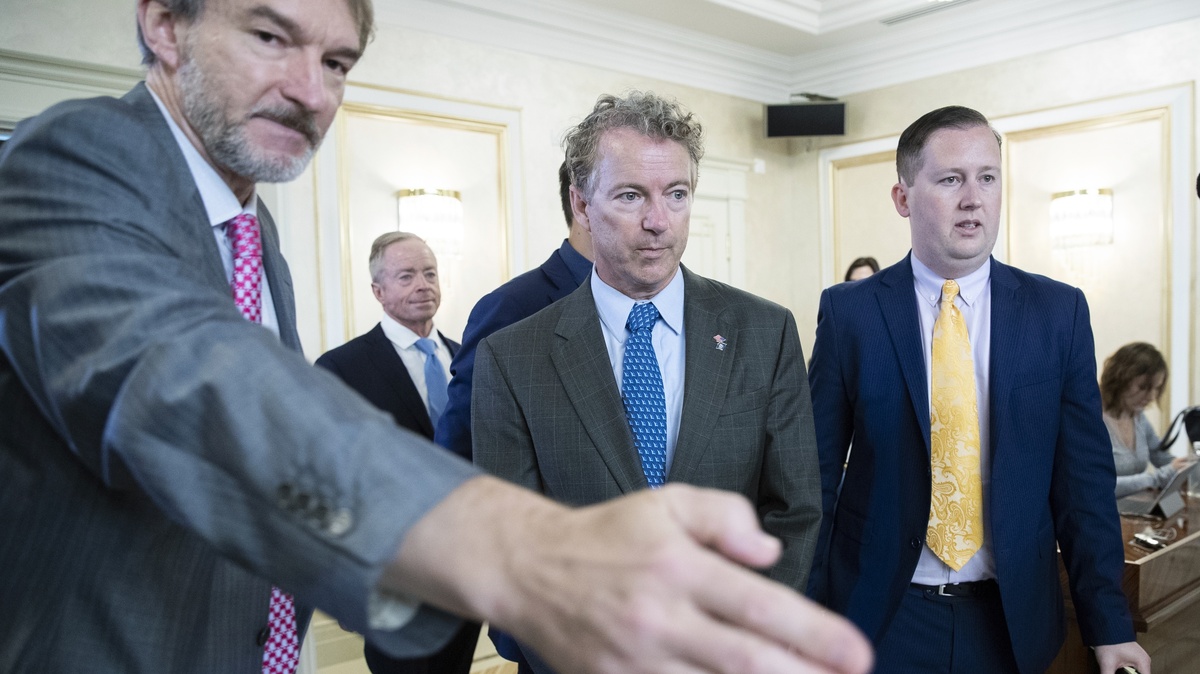 Sen. Rand Paul, center, and his communications director Sergio Gor, right, enter a hall during their meeting with Russian lawmakers in Moscow Monday.

By now, practically everyone has seen that picture of the two guys at President Trump's weekend rally in Ohio wearing T-shirts that said: "I'd Rather be a Russian than a Democrat!"

So I took this photo yesterday of two guys from Delaware, Ohio at a Trump rally. Learn more about them here. https://t.co/nEPZFvdCS0 pic.twitter.com/kzdcwWtXfm

Many have also seen the visuals of Kentucky Republican Sen. Rand Paul hobnobbing in Moscow this week with members of the Russian Council, sometimes called his "counterparts." These included the chairman of the council's foreign policy panel, Konstantin Kosachev, who happens to be under official U.S. sanction for his government's actions against our government.

But that didn't seem to bother Paul, who invited Kosachev and others to visit the USA.

Indeed, this sanction and other tokens of disapproval imposed on Russian officials in the past year have not seemed to chill the enduring warmth between Russian President Vladimir Putin and Trump. Paul carried a handwritten note from Trump to Putin on his trip.

A recent Gallup Poll showed some 40 percent of Republicans, a plurality of the self-identified category, now regard Russia as an ally or at least as a country friendly to the United States. That is double the percentage of Republicans who expressed that view to Gallup in 2014.

One need not go far to find enthusiasts at any Trump rally who say they have no problem with Russians helping elect or re-elect him — so long as he fulfills his campaign promises to Americans such as themselves. Who cares? Countries interfere with the internal business of other countries all the time.

Just after he took office in 2017, Trump was asked on Fox News about Putin's reputation as a "killer." Trump shot back: "You think we're so innocent?"

And the dominant image of America's posture toward the autocrat in Moscow is now the sight of the two presidents on stage in Helsinki last month for a news conference. Much of the world was shocked at their cordiality, at Trump's apparent acceptance of Putin's denials about 2016 election hacking and at Putin's open admission that he had favored Trump's election.

This week, the U.S. did finally get around to issuing some new sanctions against the Russians for using a chemical agent (Novichok) to carry out an attack on foreign soil in violation of international law. The poisoning of a former Russian spy (Sergei Skripal) and his daughter in London in March had prompted widespread condemnation and sanctions from other countries.

But months went by between the determination of Russian guilt in that incident and the formal response from the Trump administration this week.

#Breaking: A second meeting between President Trump and Russian President Vladimir Putin has been delayed, according to a statement from national security adviser John Bolton.

Trump also has grudgingly postponed a planned Washington visit by Putin, pushing it into the new year with the proviso that special counsel Robert Mueller's investigation of Russian interference in the 2016 election be finished first.

But the real endpoint of that probe is far from certain.

This week, in a related trial in federal court, former Trump campaign chairman Paul Manafort has been shown to have extensive entanglements with Russians. These include debts to Oleg Deripaska, a member of Putin's inner circle of associates, who has sued him and his former associate Rick Gates for $25 million.

How seriously should we take any of this?

Some are asking whether Manafort's exposure to Russian pressure and influence might be a reflection of Trump's own. That spurs a defensive reaction from the presidents' staunchest supporters, such as the guys in the T-shirts, who may regard it all as a kind of joke. Or perhaps it was just their way of trolling the world or letting us know how much they disliked the Democrats. And if seeing that message was also a hoot for Putin, so be it.

Paul speaks for the "who cares?" wing of the party by saying Russia did nothing that other countries don't do "all the time." Like his father, the iconoclastic libertarian and frequent presidential candidate, Ron Paul, the Kentucky senator is quick to note the instances of U.S. interference in elections abroad. 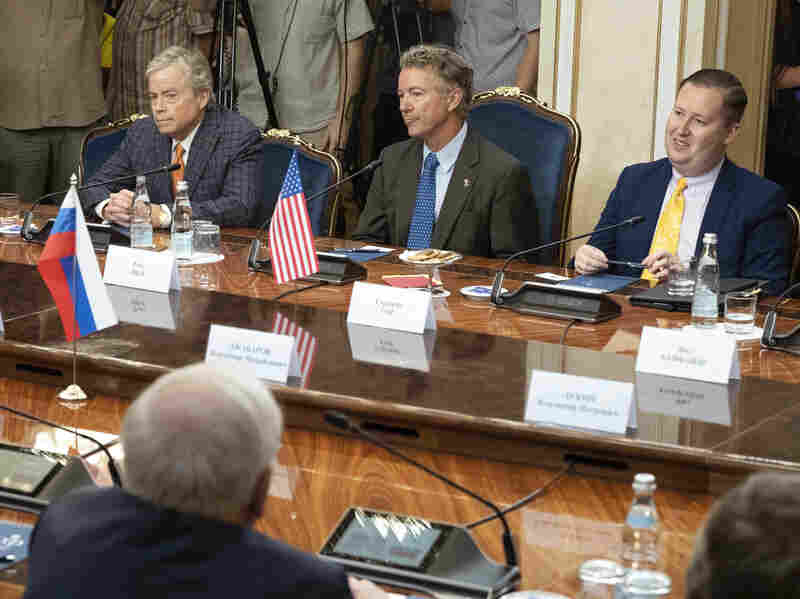 For those who take their cues directly from Trump, all tales of Russian influence and interference are distractions that border on being a conspiracy against the Trump regime. It has been called a "coup in slow motion" by more than one commentator on the right.

Of course, many Republicans have not changed their view of Putin or his government. Arizona Republican Sen. John McCain continues to call Putin "a thug" and denounces his "vile attacks on democracy." The conventional view among congressional leaders is that Mueller's investigation of Russian interference should go forward and that Putin cannot be trusted.

A phalanx of Trump officials came to the White House briefing room last week to pledge a vigorous defense against Russian efforts to hack the 2018 midterm elections – efforts they acknowledged were very much underway.

Here is Republicans and Democrats on Vladimir Putin since July 2014. pic.twitter.com/s4I6FY5cbt

Sarah Palin, the outspoken party nominee for vice president in 2008, had this to say to Sean Hannity on Fox News in 2014: "Look, people are looking at Putin as one who wrestles bears and drills for oil. They look at our president [Obama] as one who wears mom jeans and equivocates and bloviates."

Palin at the time seemed mostly interested in using Putin as a critique of Obama. That same year, a poll by the nonpartisan YouGov found only 10 percent of Republicans viewed the Soviet strongman favorably.

But the implicit admiration Palin expressed for certain qualities perceived in Putin was present among some American conservatives — as it was in nationalist and populist elements of the political mix in other Western democracies — even before Trump's ascendance.

But it was Trump who gave this strain of thought a massive steroid shot with his attitude toward the Russian autocrat throughout the primary and electoral season. Another YouGov.com poll late in 2016 found the percentage of Republicans viewing Putin favorably had nearly quadrupled in two years to a stunning 37%.

Even more remarkable, perhaps, was the decline in those poll respondents who said they disapproved of Putin strongly. That response was chosen by an outright majority of Republicans (51%) in 2014 but by just 10% in late 2016.

It must be said that a corresponding change has overtaken many Democrats in the Trump era. Many who were all in favor of the famous "reset button" policy when Hillary Clinton was secretary of state in 2009 are now suddenly wary of the Kremlin and all its works. They see nothing but evil.

Part of that is experience. They have seen Putin seize Crimea and besiege parts of Eastern Ukraine. They remember the Dutch airliner that was shot down by a Russian missile in that region.

It's Official: Record Number Of Women Nominated For House Seats In 2018

Still, the spectacle of Republicans defending Russian interests while Democrats attack, represents a role reversal as striking as any in this era of irony.

At bottom line, the idea of "getting along better" with Russia dates back to Mikhail Gorbachev's glasnost era and the efforts at "détente" before that. Even before the "Iron Curtain" was lifted, the idea of nuclear war had receded and the poles of the Cold War had seemed less diametrically opposed.

Henry Temple, also known as Lord Palmerston, was twice the British Prime Minister in the 1800s. But he may be best remembered in our time for these words: "We have no eternal allies, and we have no perpetual enemies. Our interests are eternal and perpetual, and those interests it is our duty to follow.".

These words are often quoted as a capsule of what we now call Realpolitik, an approach to foreign policy emphasizing a realistic assessment of each nation's selfish ends over any kind of idealism on the international stage.

By Palmerston's dictum, any nation we have fought as an enemy may become an ally and friend — but only for the interval that history dictates. In the first half of the 1900s, the U.S. fought two wars in Europe in an alliance against Germany that included Russia. Since then, we have been resisting the Russians and busily building back Germany as the anchor of Europe's own defenses.

A similar reversal has taken place in Asia, where we backed China and fought Japan in World War II, but have been close allies with Japan and antagonists of China for the last seven decades.

Republicans may see nothing wrong in collaborating with Putin, whatever his acts and whatever his aims, so long as it serves their own sense of grievances and policy preferences.

And those who do still fear Putin's intentions are at least equally wary of the power of this president. They have seen how quickly he can hide his face and blot out the sun for an aspiring candidate or a familiar figure struggling to survive. To cross him, as has often been observed, is to invite defeat in the next party primary or isolation in the next party caucus meeting.

If maintaining the current Republican hold on the White House and Congress means justifying and defending President Trump's attitude towards Putin, then for many that is the party's mission.