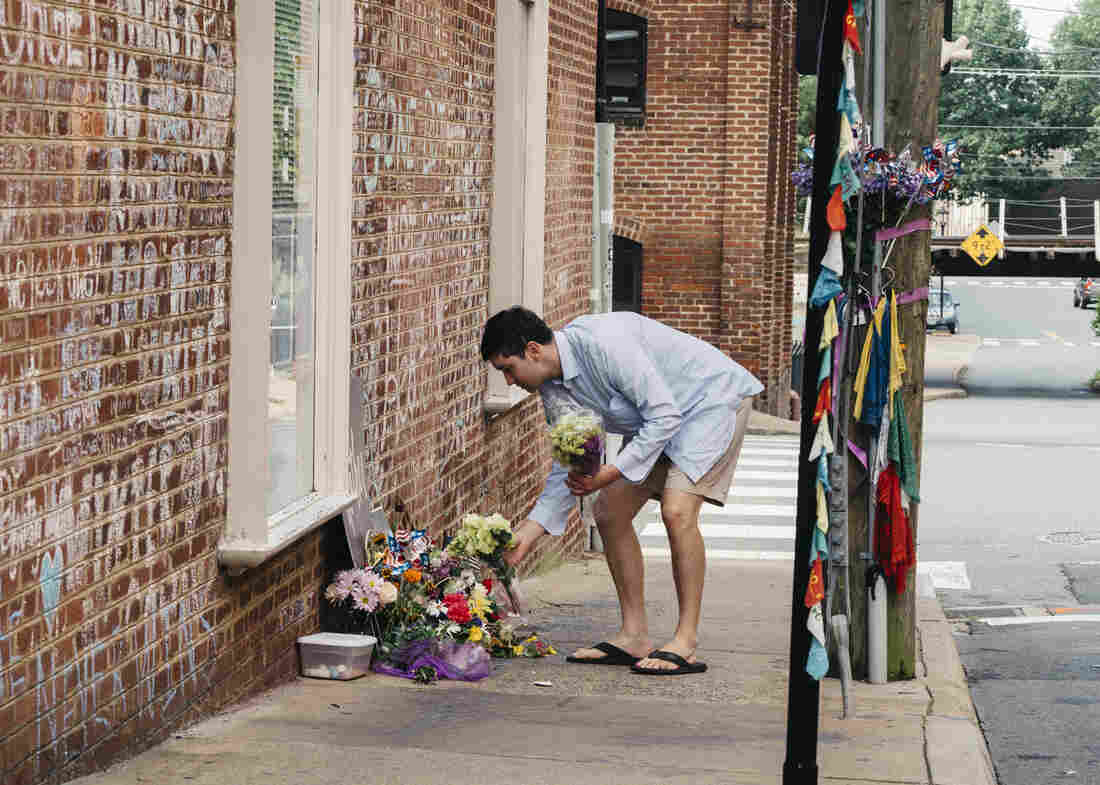 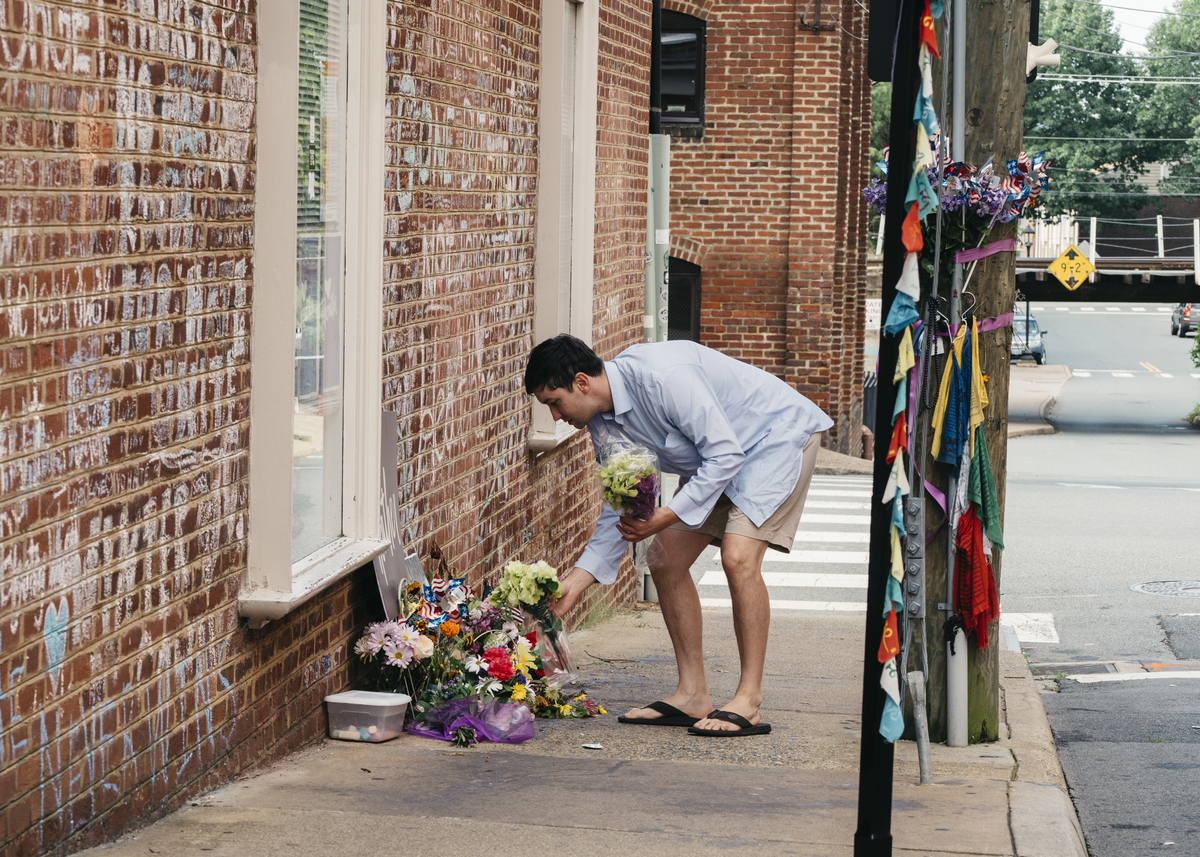 Peter Reijmers, 29, of Charlottesville, lays flowers at a memorial on 4th Street SE where Heather Heyer was killed last August.

Charlottesville has long been known known as a charming college town — home to the University of Virginia and its founder Thomas Jefferson. After a deadly clash between white nationalists and counterprotesters on Aug. 12 last year, Charlottesville has become shorthand for racial strife.

"As a community I honestly feel more divided than ever, which is sad," says Michael Coleman, a 30-year-old musician and sales manager. He's African-American, and spoke while standing by the statue of Confederate Gen. Robert E. Lee that white nationalists came to defend from removal last year. The space brings reflection. "How it's been such a source of hate and turmoil and conflict," Coleman says.

NPR first met Coleman at a candlelight vigil on the U.Va. campus last year where he posed a provocative question: "Three-thousand people gathered with candles singing is beautiful, but are you going to engage yourself, are you going to talk to people tomorrow and the next day and next day?"

A year later he says it's been a struggle. "We tried to have conversations about it," he says. "It just helps you realize how difficult the conversation of race is." Coleman is channeling his energy in writing songs about the experience. Others are still trying to find reconciliation.

"We're trying to piece together our city," says Frances Racette. She's part of the Charlottesville Friends Meeting — a Quaker Group — that hosted a prayer gathering in this downtown park, part of an effort by a local clergy collective to hold prayers twice a day all this week.

"The purpose is to reclaim peace in this space especially ahead of the anniversary of the event," says Kelly Ceppa, a local real estate broker.

We experienced great trauma, great violence and the complete breakdown of society and the civilization as we knew it.

At the prayer meeting, a few dozen people sat under a shade tree in silent meditation. They sang the hymn: "Spirit of the living God fall afresh on me." Racette rose to share her conviction. "We experienced great trauma, great violence and the complete breakdown of society and the civilization as we knew it," she says. "What I've learned from that is that that was one day for me and millennia for other people. And so as we try to put what we think of as civilization back together, it has to look really different from what we have thought of as civilization, as our civilization." 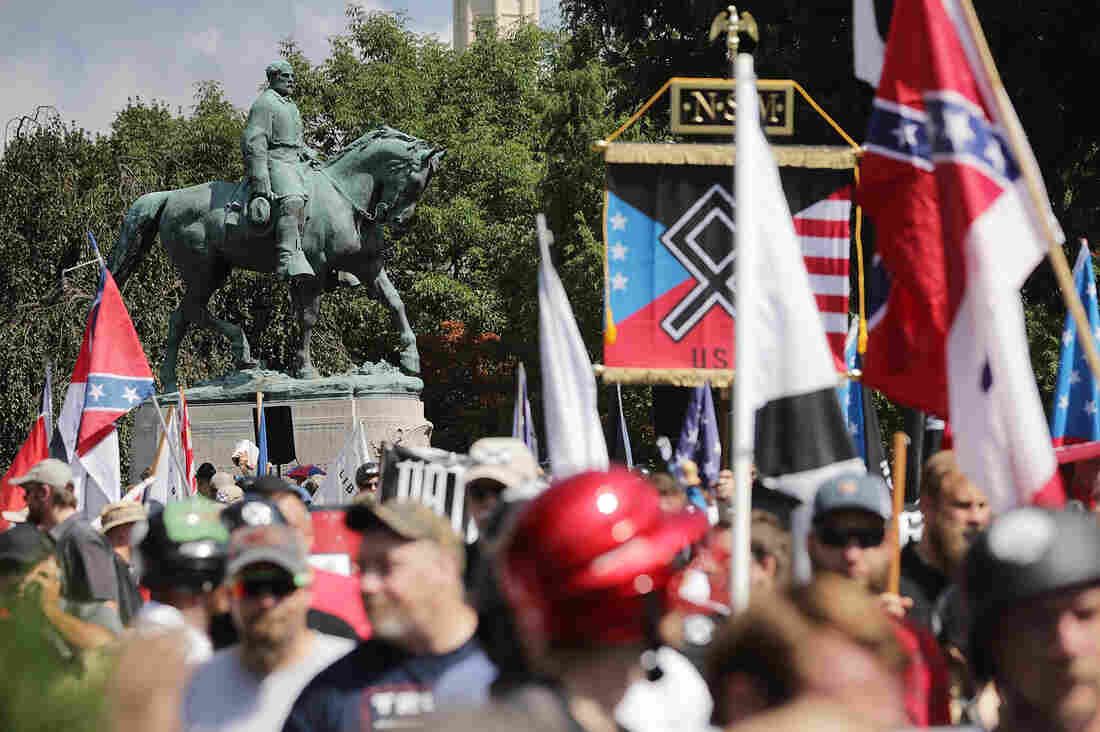 The statue of Confederate General Robert E. Lee stands behind a crowd of hundreds of white nationalists, neo-Nazis and members of the "alt-right" during the "Unite the Right" rally August 12, 2017 in Charlottesville, Va. Chip Somodevilla/Getty Images hide caption

After the Quaker meeting, retired coach and teacher Steve McNerney says there's a need for both personal work and institutional change. But he says not everybody is ready to embrace that, and would rather see things get "back to normal."

"But what they're missing is it's kind of the normal that's the problem," says McNerney.

Since the violence last year, Charlottesville city government has been upended. Local authorities faced harsh criticism for not intervening and preventing the bloodshed. The police chief, city manager, city attorney and a spokesperson from last year are all gone. The new mayor, Nikuyah Walker, comes from an activist background.

She welcomes the spotlight that has resulted from the "Unite the Right" rally. "Everything that's been going on since Thomas Jefferson created this place [and it] needed to have the level of attention magnified on it," Walker says.

With a population of less than 50,000, Charlottesville prides itself on being a liberal college town and a top tourist destination. Now, she says the new narrative is coming from the nearly 20 percent of residents who are not white and have long experienced racial disparities. 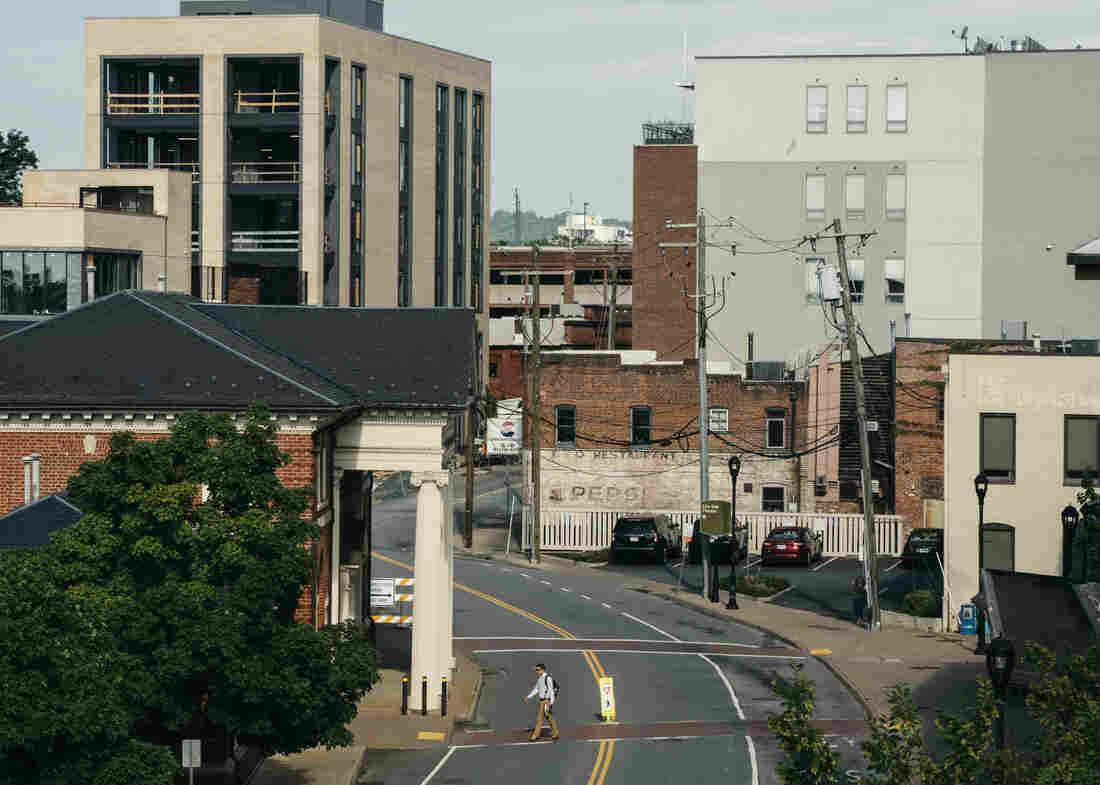 Historic Downtown Charlottesville, Va. Since the violence last year, Charlottesville city government has been upended. Local authorities faced harsh criticism for not intervening and preventing the bloodshed. The police chief, city manager, city attorney and a spokesperson from last year are all gone. Justin T. Gellerson for NPR hide caption 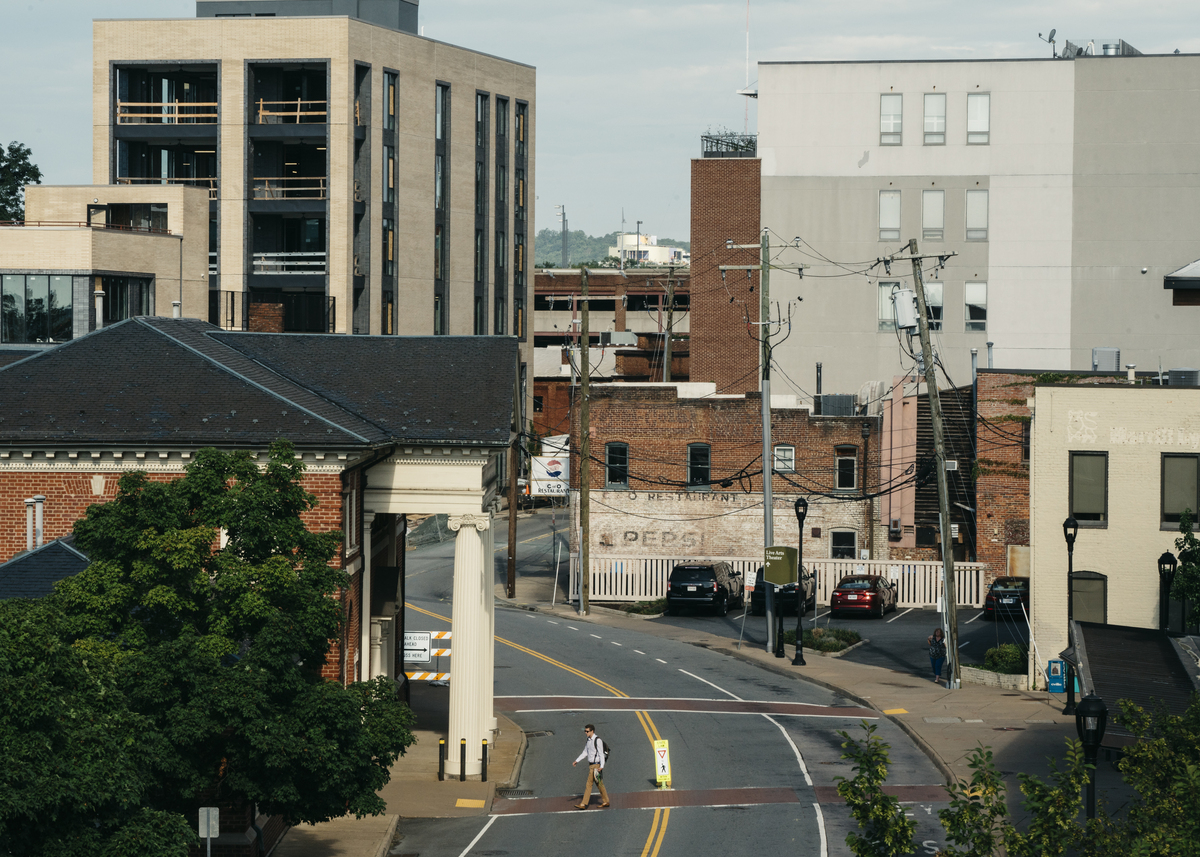 Historic Downtown Charlottesville, Va. Since the violence last year, Charlottesville city government has been upended. Local authorities faced harsh criticism for not intervening and preventing the bloodshed. The police chief, city manager, city attorney and a spokesperson from last year are all gone.

"All the things that are very ugly and very real that people face here every day, they didn't want to talk about those things," says Walker. "And last year changed that — [we now have] the ability for people to walk into a room and demand that you tell the story they wanted told."

But as that story is being amplified, some fear being drowned out of the conversation.

Charlottesville city council meetings have been marked by disruptions over the last year. David Pettit, a local attorney and a member of the downtown merchants' association, says finding common ground for discourse here is elusive. "Out of the events of last year has come a fair amount of pretty heated rhetoric relating to racial issues, socioeconomic disparity, housing, all of which are very legitimate issues," he says. "We're still not to the point of being able to coalesce around solutions."

The ongoing turmoil has been disruptive to commerce. Joan Fenton has a gift shop and a women's clothing store on the downtown pedestrian mall. "Anger at the city — the anger at whatever historically has happened — comes out as disliking all business," she says. "And because we are downtown where City Hall is, we get tied into that even though it's not a real tie."

The downtown area is where Heather Heyer was killed and several injured when a car rammed into a crowd of counterprotesters last year. This weekend the downtown will be closed to traffic and even pedestrian access will be controlled by security checkpoints.

There's an uncertainty about what might happen during memorial events. The local organizer of last year's Unite the Right rally is planning a protest in Washington, D.C. Still, local people fear hate groups might show up in Charlottesville as well. They are grappling with what action to take if that happens.

At an event earlier this week at the Jefferson School African-American Heritage Center, Black Lives Matter organizer Lisa Woolfork offered advice to a college student. "If it feels like freedom do it," she says. "If it doesn't feel like freedom, don't do it."

Woolfork, a professor at U.Va., says it's not surprising that Charlottesville is still struggling a year later. She says, after a large cultural catastrophe, there tends to be an unrealistic rush toward healing. "These things have to happen at a cellular level," she says. "And if we think about what the cellular history of Charlottesville is, that is a white supremacist history, and it will take a long time to recover from that."

Ahead of the anniversary, groups have been training ordinary citizens on how to respond if another crisis erupts — acting as mediators to de-escalate violence, or providing water and shade in the sweltering southern summer.

Authorities have already declared a state of emergency and say more than a thousand law enforcement officers will be deployed this weekend.