Accessibility links
Are You Listening? Hear What Uninterrupted Silence Sounds Like Inside the Hoh Rain Forest in Washington state, acoustics experts have attempted to preserve a location free of human-made noise. They call it One Square Inch of Silence. 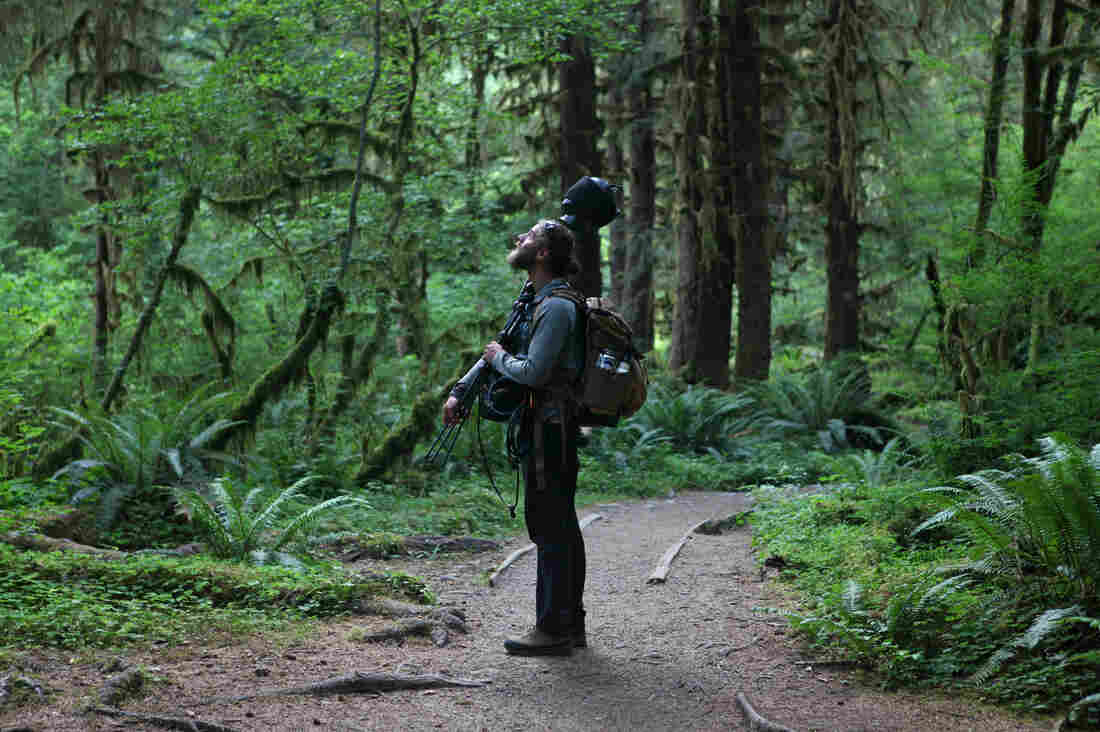 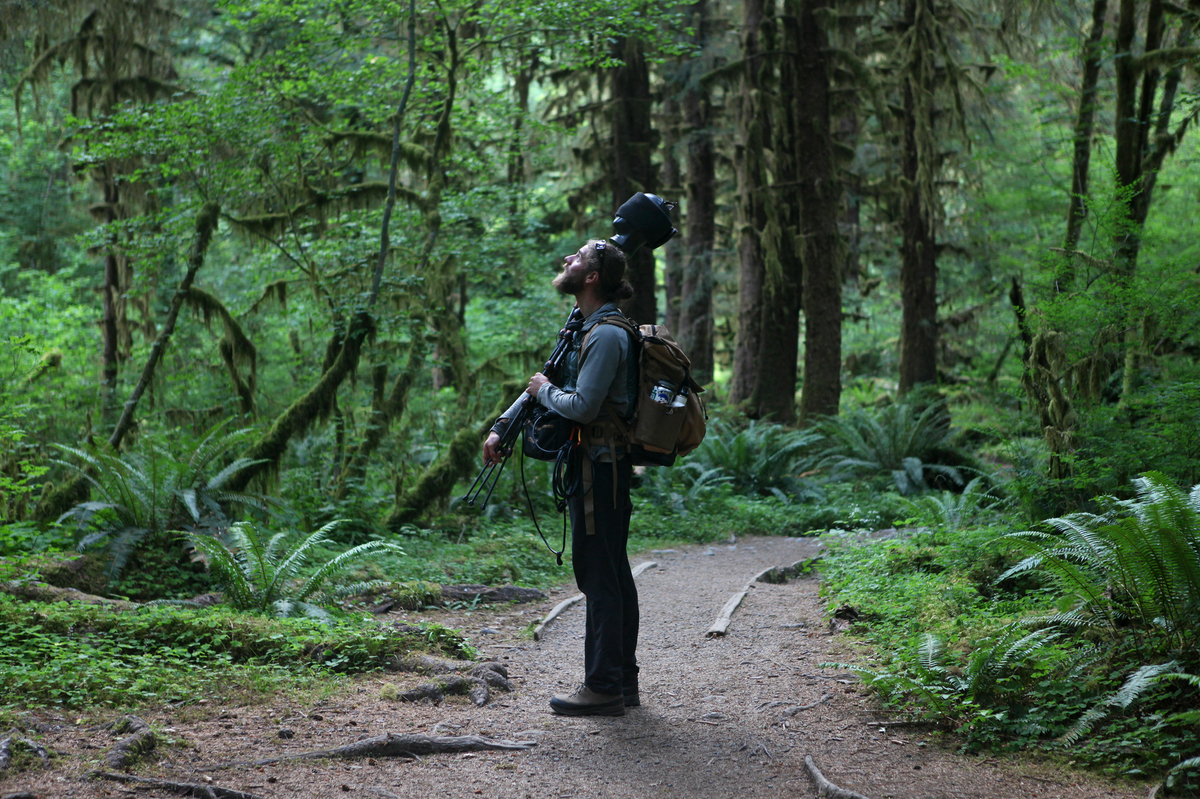 Matt Mikkelsen carries "Fritz," his microphone system, to the path in the Hoh Rain Forest that leads to One Square Inch of Silence in Washington's Olympic National Park.

Summertime is for road trips. Atlas Obscura and All Things Considered are traveling up the West Coast, from California to Washington, in search of "hidden wonders" — unique but overlooked people and places.

It's a little before 5:00 on a summer morning, and Matt Mikkelsen stands not so far down a trail in the Hoh Rain Forest in Washington's Olympic National Park. In the dense forest, dominated by massive Sitka spruce trees dripping with tangles of moss, Mikkelsen has just set up a tripod, topped not with a camera but with a disembodied black foam head.

The head is actually an unusual microphone — which Mikkelsen lovingly refers to as "Fritz" — and he is using it to record the dawn chorus, the time when the forest wakes, and the chirps and hiccups of the night give way to the trilling, ecstatic reveille of the rain forest's birds. (To fully experience what this sounds like, listen to the audio version of this story — available above — using earbuds.)

Mikkelsen, an audio technician and recording specialist, works with a nonprofit called One Square Inch of Silence, founded by his mentor, audio ecologist Gordon Hempton. Its purpose is to promote the preservation of quiet places — that is, places without human-made sounds.

Protecting wilderness, they argue, means more than guarding against development and industry, but also keeping spaces free of noise pollution — including the sound of aircraft far overhead — that can affect the people who visit these places and the wildlife that calls them home. 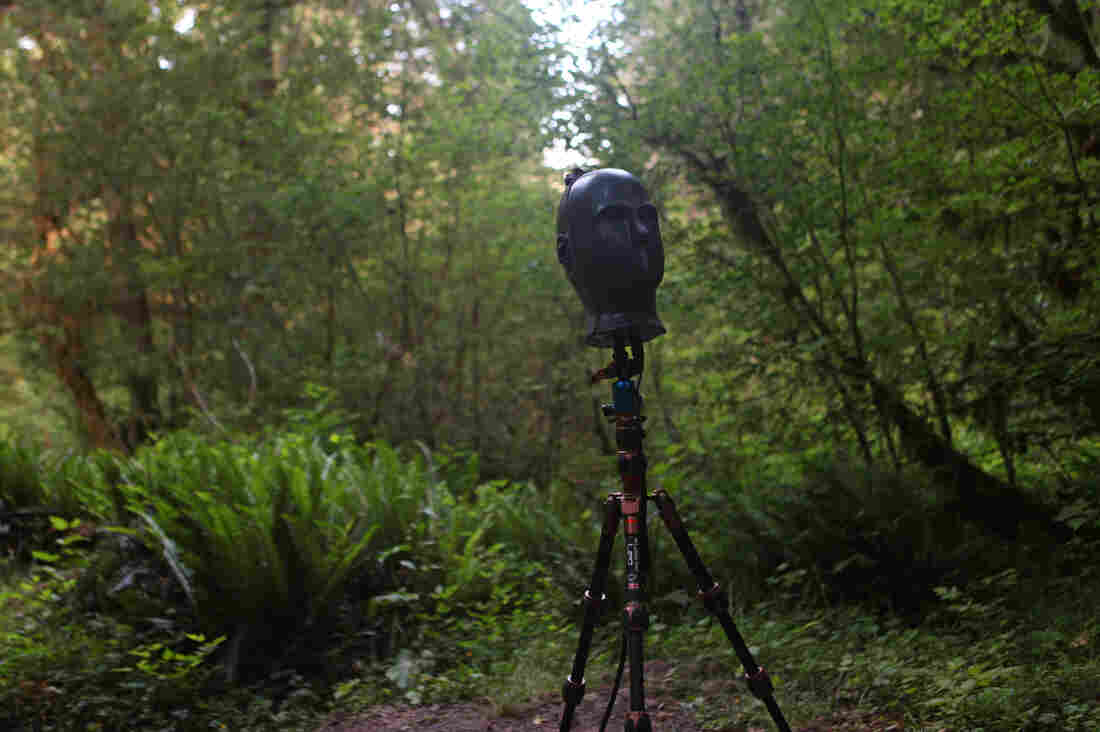 Fritz, the microphone system used by Mikkelsen and his mentor, audio ecologist Gordon Hempton, stands on a tripod. They use their recordings to promote the idea that natural sounds are complex, diverse and important. Samir S. Patel/Atlas Obscura hide caption 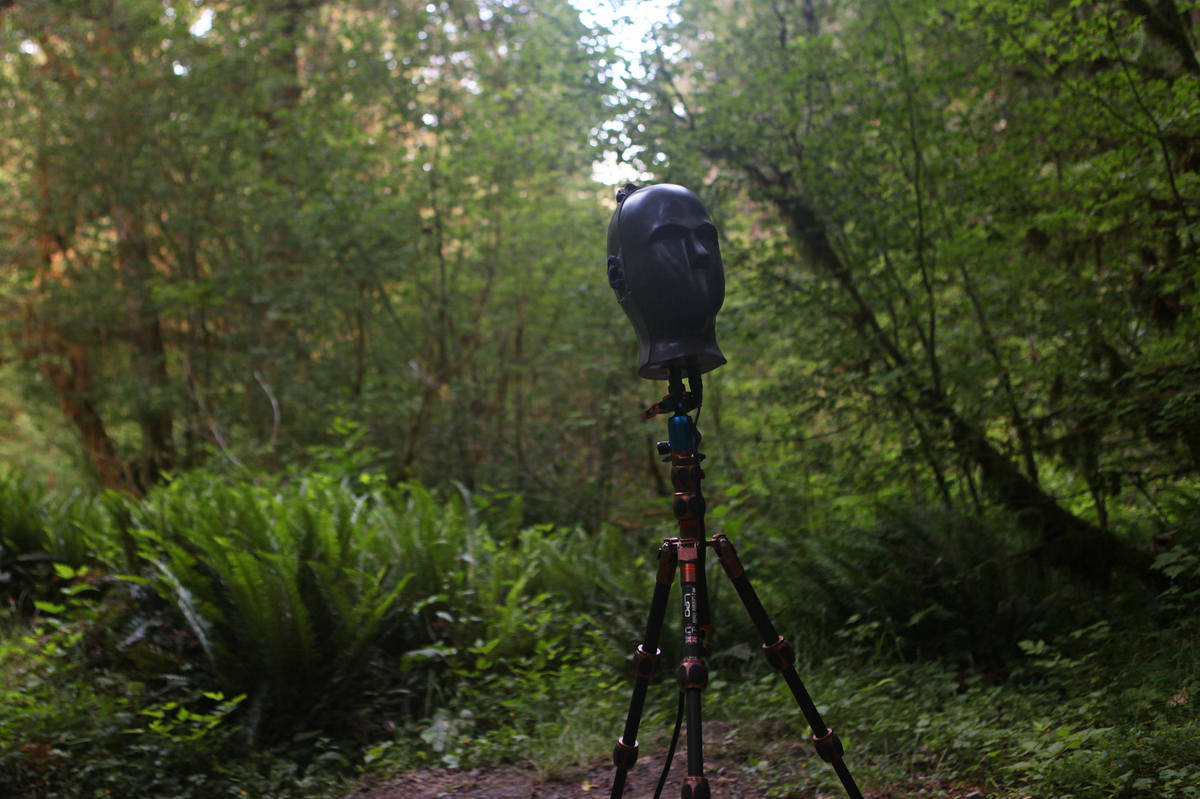 Fritz, the microphone system used by Mikkelsen and his mentor, audio ecologist Gordon Hempton, stands on a tripod. They use their recordings to promote the idea that natural sounds are complex, diverse and important.

In 2005, when Hempton founded One Square Inch of Silence, he designated a spot, a few miles up the Hoh River Trail into the rain forest, the quietest place in the U.S. and marked it with a small, red stone.

Mikkelsen, 24, is tall and slim, with a long auburn beard. His friends call him "Sasquatch," but that doesn't seem to suit his gentle, quiet demeanor.

"Even though protecting 1 square inch seems like a very small, insignificant amount of space," he explains, "due to the nature of sound and silence, it's preserving this whole ecosystem."

If that inch stays quiet, that means that the entire valley, and miles around it, will be similarly intact and free of intrusive noise. Hempton defines a naturally quiet place as one where there are 15 minutes of non-human-made sound. He estimates that there are fewer than 10 such places in the U.S. 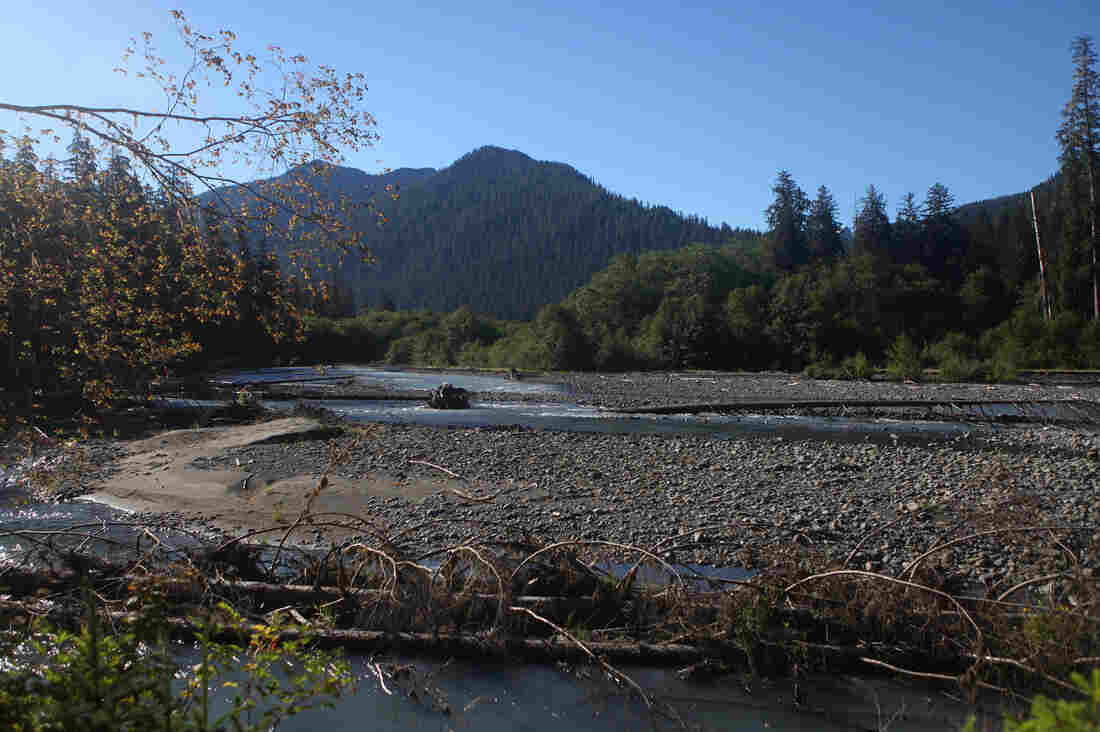 The Mic That Makes It Happen

Use Your Earbuds: Fritz Gets Inside Your Head

If you want to capture the sound of a place, you need to have ears. Your external ears — called the auricles or pinnae — do all kinds of interesting things. They collect and amplify sound and guide it toward your inner ear. They filter frequencies to make it easier to pick up human voices. They help your brain determine where a sound is coming from — not just side to side, but front to back and up and down — and how far away it is. They help turn the space around each of us into a living sound field.

Fritz, technically a Neumann KU81 microphone, actually has ears. On each side of the disembodied foam head is a skin-density ear, and behind each of those is a sensitive, sophisticated microphone. This design allows for recordings that replicate human hearing in a way that most other microphones don't.

As you listen to the audio above, it's best to use earbud or in-ear headphones to hear what Fritz's hypersensitive ears are picking up. The sensation is more than mere amplification, because you can still perceive the direction and distance of each twitter and rustle in the rainforest, thanks to Fritz's ears.

As Mikkelsen adjusts the sensitivity of his recording, the dawn chorus seems to explode around the valley.

"In a forest like this, it's so dense, I can only see maybe 50 yards in one direction, if you're lucky," he says. "But I can hear for miles."

That sense, of how far you can hear, is known as your auditory horizon, and much of the time — indoors or in a city, for example — it doesn't extend very far. But in the forest, with eyes closed and a little focus, it sprawls.

"In a place like this your auditory horizon isn't just 1 or 2 miles," he says. "You can hear everything that's happening in this valley. ... It's like we're listening to 5 miles or 10 miles around us right now. It's crazy."

Mikkelsen then offers headphones connected to Fritz, so visitors can hear what Fritz's hypersensitive ears are picking up. The sensation is more than mere amplification, because you can still perceive the direction and distance of each twitter and rustle, thanks to Fritz's ears.

"When you listen to it through a microphone system like this," he says, "you all of a sudden realize that you're listening to hundreds, if not thousands, of birds."

It's like your own hearing, enhanced to an impossibly intimate level.

But since One Square Inch of Silence was established, the Hoh Rain Forest has gotten louder, through increased air traffic and the testing of loud Navy jets nearby.

Now, Hempton and Mikkelsen are planning to make One Square Inch part of a larger effort to identify, designate and protect quiet places like it around the world.

"Just the fact that this place exists is enough to give me hope for the world," Mikkelsen says, softly. "And I think that's the reason why we conserve wilderness in the first place."