Accessibility links
Rural America Faces A Crisis In 'Adequate Housing' Small towns have their own version of the housing crisis: not enough homes being built, plus a lack of move-in ready homes. Local leaders say it's hard to expand the tax base without more homes. 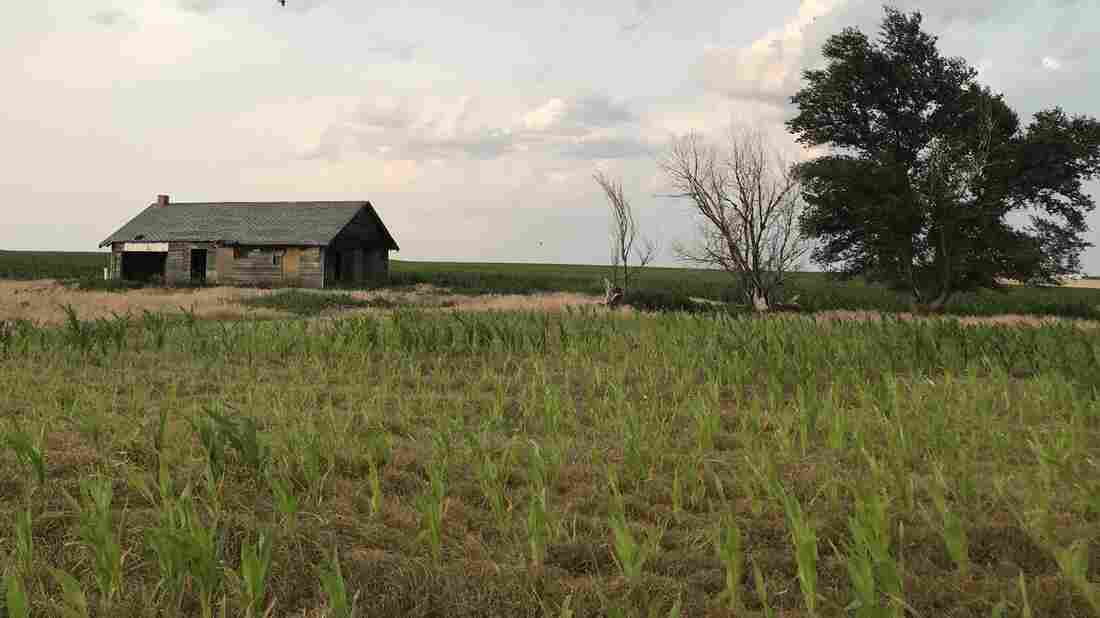 One of the many abandoned homes outside Ogallala, Neb. Kirk Siegler/NPR hide caption 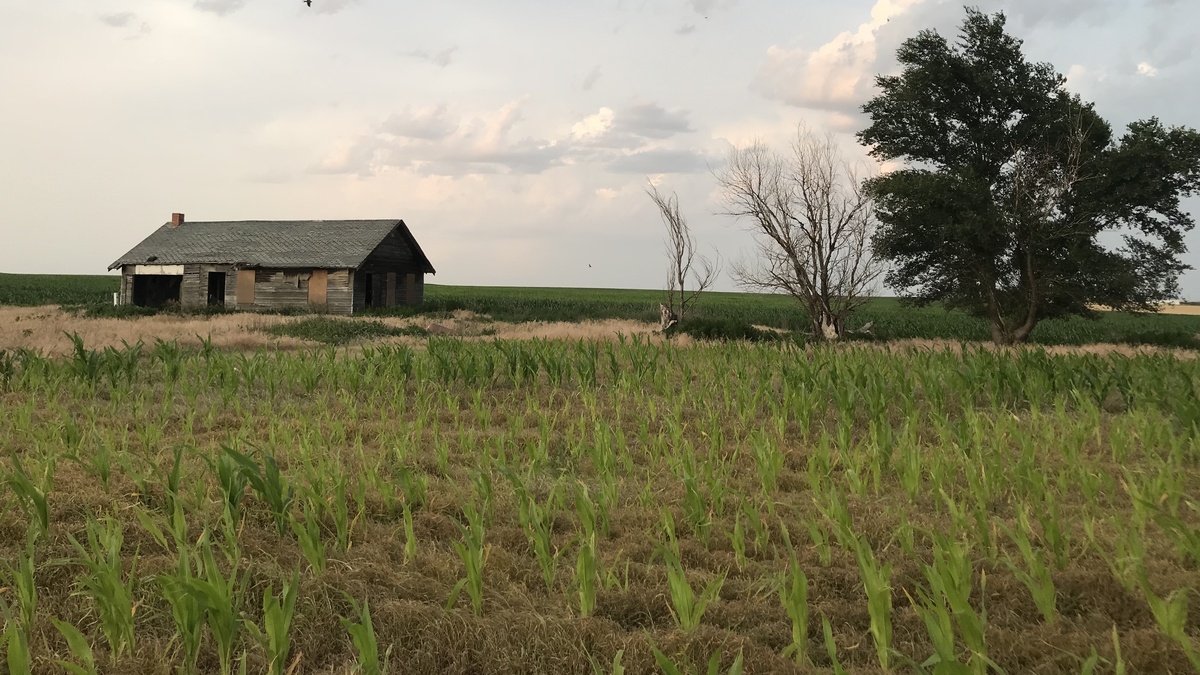 One of the many abandoned homes outside Ogallala, Neb.

Along the country roads that fan out from Ogallala, Neb., there are abandoned, weathered old farmhouses and collapsed barns, remnants of the hardscrabble settlers who first tapped the Ogallala aquifer and turned the dry, high plains into lush wheat and corn fields.

Like a lot of the Midwest, western Nebraska slowly emptied out over the years, which is why a lot of locals say the current housing shortage is nothing short of a paradox.

"It's a tricky situation," says Mary Wilson, director of the local economic development office in Ogallala, population 4,500. For Wilson, the crisis that rural towns face would be more aptly dubbed a shortage of adequate housing.

"People aren't updating their homes before they throw them on the market," she says. "And people are living in their homes longer here."

Economists say this phenomenon of "aging in place" is one of the main factors driving a shortage in housing nationwide. According to one analysis, people are living in their homes twice as long as they did before the Great Recession. Small towns like Ogallala are no exception to this trend. Ogallala's residents tend to skew older. And the town's remoteness and distance from a major power center like Omaha or Denver mean its problems with housing could be even harder to solve.

When Wilson moved to town from Colorado five years ago, drawn back to the small town Nebraska she grew up in, she and her husband had a hard time finding something suitable.

"We had to settle for what was available," Wilson says, driving down a quiet, leafy street of larger homes in the center of town. Many homes here were built for a far different time, before mechanization, when you needed big families to work the farms. Most are outdated. The few that are on the market, Wilson says, often need thousands of dollars worth of upgrades.

Most people can't — or aren't willing to — pay that. 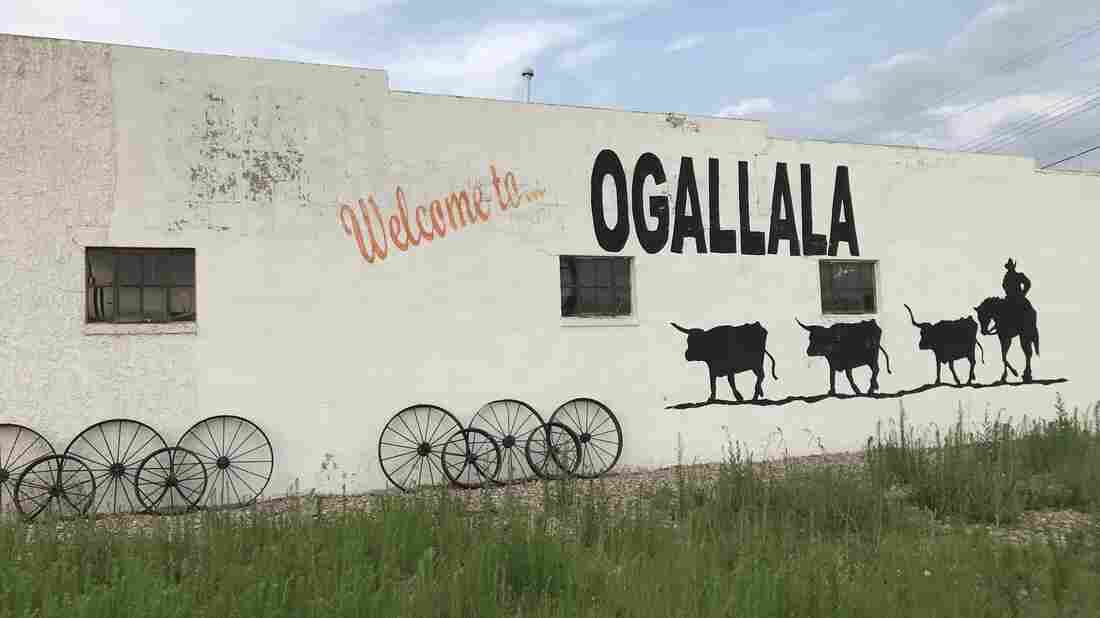 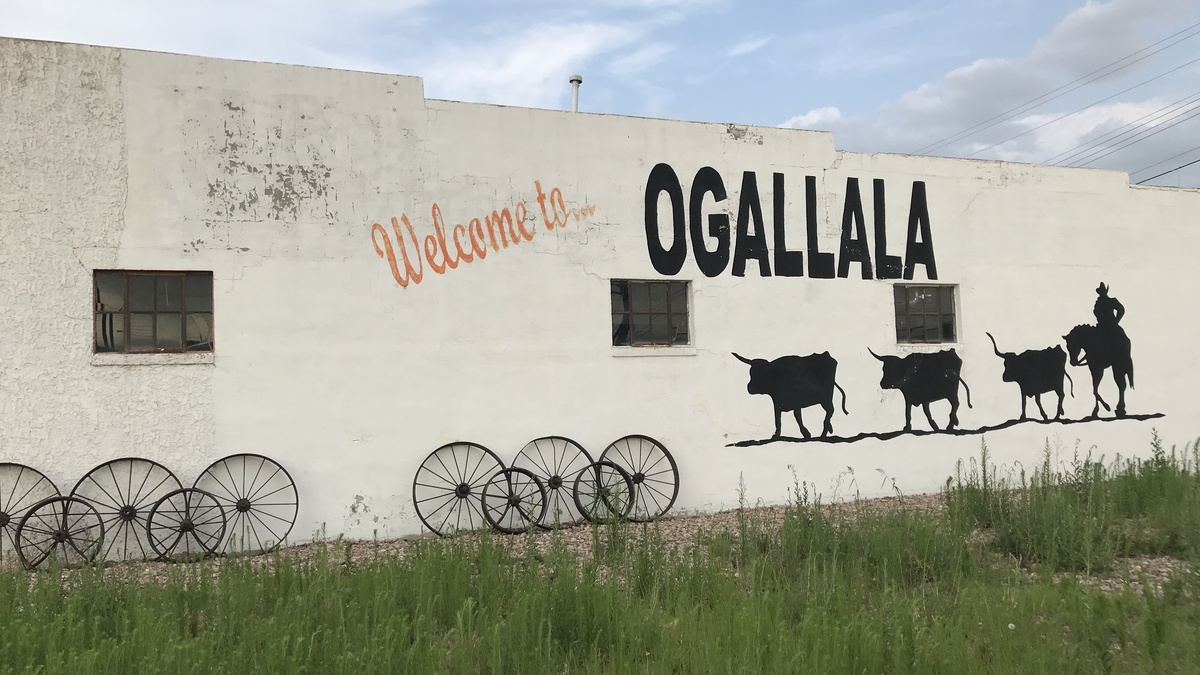 "My role as the economic development director is bringing business and industry to town, retaining the business and industries that we have, doing what I can to expand that tax base," Wilson says. "It's difficult to do that when we don't have adequate housing."

This is the classic "chicken and egg" that has long plagued rural America, but the problem is being magnified now by the housing shortage. Nationally, housing economists lay blame on a number of things, including the high price of lumber due to new tariffs on Canadian wood. There's also a labor shortage — after the 2008 housing collapse, construction workers left the trades in droves.

Doug Davis, a longtime local real estate man and developer, says it's even worse in small towns. He says there's easily enough demand in Ogallala to build and sell 40 new houses in the next few years. For now, he's just proud to have built three recently.

"In the bigger cities, you [at least] have a selection," Davis says. "I couldn't go out and get five bids on a plumber to do this house, because they're all busy."

A lot of the contractors who are here are getting older and close to retirement. That slowed construction significantly on a 1,300-square-foot home Davis recently built and sold in the center of town. Marketed as workforce housing, the home has modern, higher-end furnishings and is considerably more energy efficient than much of the town's aging housing stock.

The longest I've ever had a house up for sale has been probably three weeks. Most of my houses are sold before they're done.

"The longest I've ever had a house up for sale has been probably three weeks," Davis says. "Most of my houses are sold before they're done."

That latest sold for $178,000. That's a lot of money in Ogallala, where wages are depressed because of agriculture commodity prices. Longtime locals are "aging in place" here, but there is also an influx of newcomers driving up prices. Retirees are moving to the area from higher-priced cities in the region. People are also drawn by the town's proximity to a popular boating reservoir and more generally to its small-town feel, including a vintage movie theater and downtown shops that still sell practical items.

"Prices have gone up quite a bit in this area from the influx of people from Denver buying second homes or retiring out here and willing to spend a little bit of money," says Joe Kempton, a physical therapist at the community hospital.

Kempton moved to Ogallala from the Phoenix area two years ago. Initially, he had to rent an apartment before moving the rest of his family here because they couldn't find something suitable in the $200,000 range. "They jump up to $350,000 pretty quickly up here, which was astonishing," Kempton says. After a year of looking, they finally decided that building their own home made more sense.

One of Kempton's co-workers at the hospital, a nurse, is commuting 50 miles one way from North Platte because she can't find a small home to buy in Ogallala. The hospital's director said the lack of adequate — or even available — housing is the main impediment to attracting and retaining quality workers.

The easiest answer for a town like Ogallala is to just build more, right? But small towns like this are still considered risky investments by most outside developers. They can make a lot more money in cities where land and home values are even higher. Ogallala is learning this the hard way. Recently, the town struggled to find capital to redevelop a shuttered middle school into condos and apartments, to help ease the shortage.

"In rural Nebraska, you don't typically have tons of seed money just lying around waiting for a project to come across its door," says Jacob Hovendick, a local financial adviser and CPA.

Hovendick's extended family is from Ogallala and he jumped at the chance to move here five years ago from Lincoln and raise his young family. The shortage of adequate or even available homes has clearly led to some soul searching.

"We're at a really pivotal point in rural America's development because you now are finding opportunities through technological advancements to be mobile as a workforce, to work from home for a company three states away," Hovendick says.

As he sees it, rural America is close to rebounding but is stymied because there are so few places to live. So Hovendick and other business leaders are behind a plan to ask voters this fall to approve a reallocation of local sales tax. The money would be used to build more workforce housing and offer incentives for developers to come here.

The federal government is not coming to help us; the state government to a certain extent can't come help us. No one's coming to our rescue. We have to start helping ourselves.

"The federal government is not coming to help us; the state government to a certain extent can't come help us," Hovendick says. "No one's coming to our rescue. We have to start helping ourselves."

Nationally, rural housing experts say the same thing. You have to have a well-organized local group of leaders committed to raising money and getting things done, in this era where federal funding for rural development is trending down. 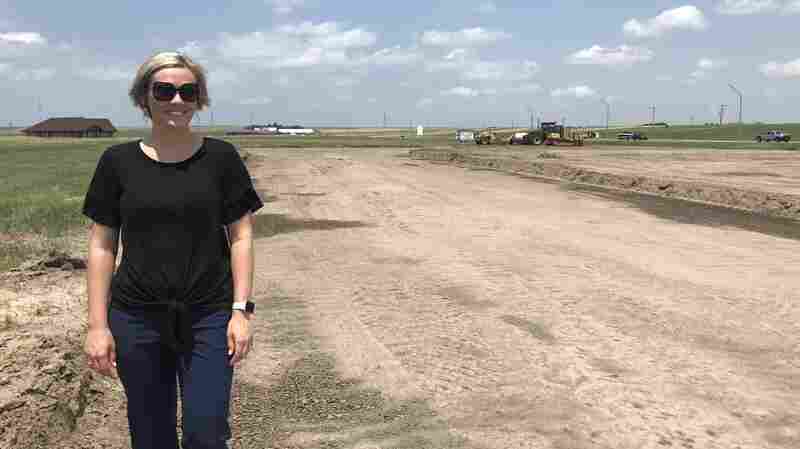 Mary Wilson, director of the local economic development office in Ogallala, Neb., visits the site of a new subdivision on the prairie north of town. Kirk Siegler/NPR hide caption 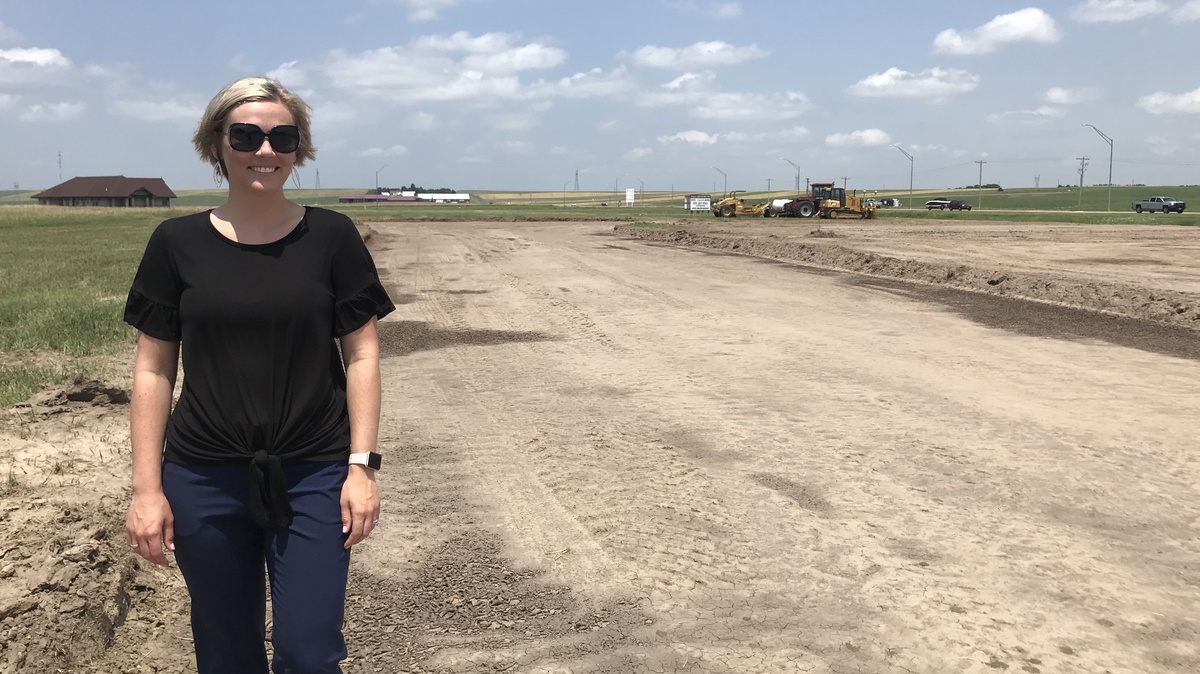 Mary Wilson, director of the local economic development office in Ogallala, Neb., visits the site of a new subdivision on the prairie north of town.

To that end, Mary Wilson, the local economic development officer, is eager to show off a new subdivision sprouting up on the prairie north of town, near the hospital, which she says could serve as starter homes for nurses and other professionals there. The developer saw the need and decided to come in and build four new duplexes on his own. Even this project is way behind schedule, because of the labor shortage.

"We wanted to break ground up here on April 21st," Wilson says.

Wilson, who grew up in an even smaller town in western Nebraska, says rural America has suffered from a confidence problem for too long. If you hear over and over that you're withering away, you start to believe it.

"Some people out there have the perception of Ogallala drying up and dying," she says. "We're not that at all."

To hear people in Ogallala tell it, the national housing shortage is more a wake-up call than a crisis for rural America.

In the audio of this report, as in a previous Web version, we state that voters would consider a small sales tax hike. In fact, the proposal is to reallocate existing sales tax funds.